Ghada Amer: when Islam was sensual 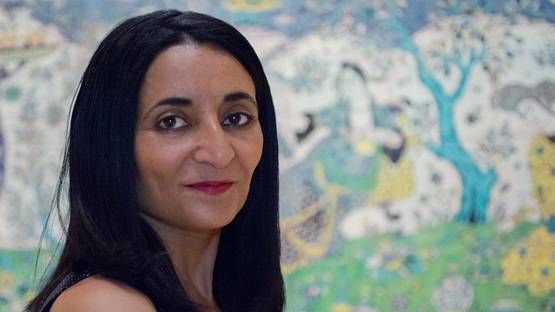 The Art Newspaper: Can you explain the ideas behind your current show?

Ghada Amer: The Encyclopaedia of Pleasure or "Gawami al Lada" was written by Ali Ibn Nasr in the late 11th or early 12th century.

It is very important to realise that it is a forbidden book within the Arab world. It is a Muslim book, written in the name of Allah when Islam was very, very free. It was written as an adoration of God because God said that, as a good Muslim one must know things, and to know those things one must enquire, write, ask questions. If you are a good sexual being you will be a better Muslim, so he is inviting people to be better sexual beings.

I was very excited, because Islam today forbids so much sexuality. Before it was not forbidden, but now it is— we don’t even know since when.

Because it is an encyclopaedia it gathers together everyone in the Muslim world who wrote on sexuality. He didn’t write it himself; you go and gather all the information that comes before. It’s amazing to see how many Muslims—very religious, very devout people—wrote about sexuality. For example, there is a chapter which I absolutely love about the supremacy of a virgin over a non-virgin.

In this he demonstrates how even the Prophet himself preferred a non-virgin, but this is written in an extremely delicate way because they knew that people were not going to accept this very easily. That’s part of why I was so fascinated by this book, which has much information on female sexual pleasure in Islam. But now it is as if it never existed.

Is the book still in print in Arabic?

No, I used a translation by someone who wrote a PhD on the book. There are only four remaining copies in Arabic: one in Istanbul; two in Cairo and maybe one in Iran. This man had access to three of the copies and translated it into English. There is only one copy of it in the National Library in America. I could not look at an original back in my native city of Cairo, because it is forbidden. We do not even really know if there were images or what was in the original book.

So we should mass bombard the Taliban with copies of The Encyclopaedia of Pleasure!

Yes, we should. The text starts: “In the name of God…” I love it! But it’s already forbidden in Egypt; how could it be spread to Afghanistan? We should force the Taliban to read it, a whole Muslim sacred text about female sexual pleasure—it would be the ultimate torture for them!

Have you translated this translation into your stitching work?

Yes, I’ve just copied the text. I always did sculpture with text which I never really showed here in America, apart from at PS1. For this I used a golden stitch; in the Arabic world there is now a strong trend to write Koranic text with gold embroidery on black velvet, called “Serma”, a way of machine embroidering, but with a man behind it rather than just a computer. I tried using a computer and didn’t like it.

I used gold on white cotton on boxes. I only chose the passages that speak about women’s pleasure, not men’s. For me it’s as if we are losing all this information about female sexuality in Islam and so I have to copy it to preserve it, even if it’s a bad translation.

For me it’s as if we are losing all this information about female sexuality in Islam and so I have to copy it to preserve it, even if it’s a bad translation

Is it easy to read the text or does one have to study the writing closely?

No, it’s not so easy to read, because it’s stitched on all the sides of the box, even the bottom. It’s not to be read in its entirety; just some phrases.

Is this element of disguise related to woman’s place in Islam?

Probably. I never think about it, but all my work is about this, about hiding and showing and concealing and society. When I make the work I don’t think about that. I go with what affects me, it’s very personal.

Have you shown your work much in the Muslim world?

Yes, in Egypt. In 1993 I was invited by a gallery to show my work—not with the government because I will never be able to show it officially—and I was very scared. 1993 was tough in Egypt, there were a lot of terrorist problems and I didn’t want to take that risk. So I refused and I kept refusing until 1997 and then I showed with the gallery. The show was mainly for artists and intellectuals; it was discreet, on the second floor in an apartment, not like a commercial show.

Do you think the work is recognisably Muslim in any way?

I never wanted this to be an issue. In the beginning I didn’t want anyone to think I was Egyptian or Muslim. I don’t do veiled women; my texts are all in English; my women do not look middle-Eastern. I speak to women in general because there is a lot of repression in sexuality in the Western world as well, even if it is not as bad as in the Muslim world which is in a crazy period in its history. For me it’s very important this work does not seem to represent the “Other”.

To people in the West your name is not immediately feminine. Is it important that people know you’re a woman?

No. A lot of people think I’m a man. That’s good, I like that. Above all, I want the work to be beautiful. This is more important than the message itself. Then, if people want to know or to understand more they can look closer.

One could possibly see the look of your work as being derived from Arabic calligraphy.

I fought all my life not to have this, but you might be right, yes, yes…

But this sewing, the stitching could be seen as woman’s work.

Yes, I chose this deliberately as a female craft. I started as a painter but at some point I replaced the pencil by the needle. I thought it was the best way to speak about women. In the Muslim context there can be no doubt this work is done by a woman, but I do my work in a Western context.

I started as a painter but at some point I replaced the pencil by the needle. I thought it was the best way to speak about women

It must be especially difficult for a Muslim woman now in New York.

This is a real war between the West and Islam, not that the Taliban represent the whole of Islam. It puts me in a very horrible situation: either you’re with America, or you’re with the Taliban; we have not been given a third choice.

But the approach of the US is very strange, as if they suddenly realised these people could kill them, but before that they had already killed so many people. They’re so ignorant in America. They drop food and then they kill them; this is very ambiguous.

I hate this war. The Taliban are the product of a war. America created them, made these monsters, and we don’t know what other monsters are going to appear

I hate this war. The Taliban are the product of a war. America created them, made these monsters, and we don’t know what other monsters are going to appear. And, of course, there is no democracy in the Arab world: Egypt is not a democracy, so for us intellectuals who want a democratic world, it seems that our space no longer exists.

Do you hope this work of yours could make a difference, in terms of the perception of the history of Islam?

I hope so. But I don’t want it to be seen as only Islamic. I am working with my own contradictions. I grew up in Egypt and then when I went to France I suffered a lot because of racism, people treated me very badly. So I totally rejected Islam and Egypt. I hated being identified as Egyptian and I was very ashamed to be Muslim, because I was not accepted by other kids.

So I learned to speak perfect French. I never wanted my work to represent the Muslim world in any way, even though in fact it started with magazine images of veiled women.

But then, despite myself, all these calligraphic elements started to come out and all these other elements of Islamic culture. So I hope this work can do something for people from my culture, not in my own country because they hate me so much there. They think what I do is very shocking and shameful.

• To read more of our best artist interviews over the past 30 years, click here for the full collection