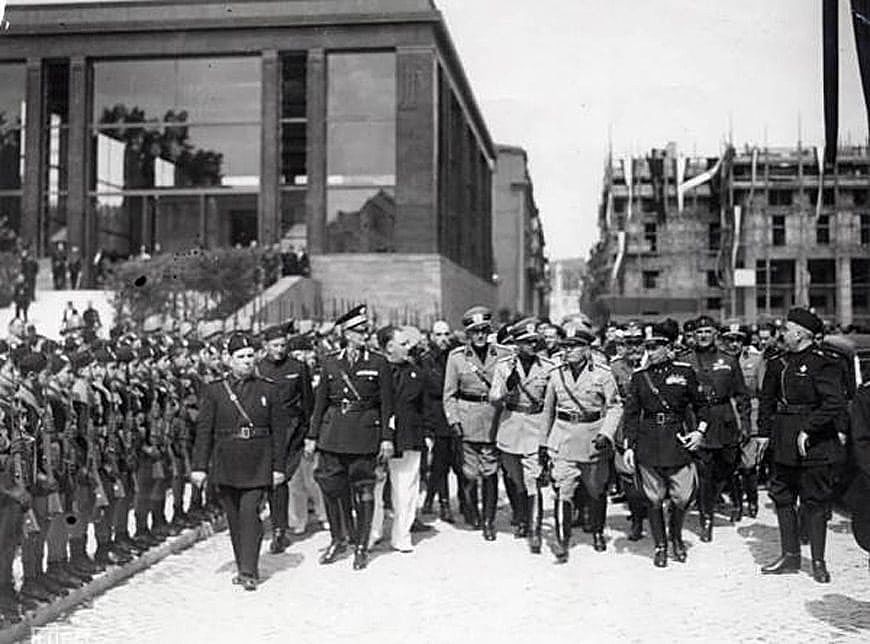 Mussolini at the opening of the Ara Pacis pavilion, designed by Vittorio Ballio-Morpurgo, in 1938

Sigmund Freud used Rome as a metaphor for human memory because, like the human mind, the city preserves relics from all the different phases of its history. Rulers past and present have attempted to wipe out the memory of previous political eras by demolishing buildings left behind and by endorsing building programmes of their own.

It should come as no surprise that, in the run up to the Jubilee celebrations scheduled for the year 2000, the mayor of Rome, Francesco Rutelli, and his Democratic Party of the Left are going a long way towards erasing the marks the Fascist dictator Mussolini left on the city.

One of Rutelli’s more ambitious projects has now been given the go ahead by the town council. Richard Meier, the American architect whose work includes the new Getty Museum in Los Angeles and the Museum of Contemporary Art in Barcelona, is to create a new building for the Ara Pacis Augustae, a marble altar dedicated in 9BC by the first Roman Emperor, Augustus. The building will be a long, single-storyed glazed loggia on the banks of the River Tiber.

The ancient monument was built to celebrate the peace ushered in by Augustus’s victory at the battle of Actium in 31BC. The walls of the altar are decorated in high relief with scenes illustrating the founding of Rome and the rise of the Julio-Claudian dynasty.

For centuries the altar lay buried in fragments. In 1938 a new technique that permitted freezing the soil of the marshy site was employed to recover all the possible fragments and the monument was reassembled. It was enclosed in a larger structure made of concrete and glass, designed by the architect Vittorio Ballio-Morpurgo, on the outer walls of which Mussolini chose to inscribe the Res Gestae.

The Res Gestae is an autobiographical account of Augustus’s achievements as emperor, including detailed description of his building projects. It was translated, exported and inscribed on temple walls throughout the Roman Empire. For Mussolini it became the sacred precedent for Italian imperialism and justification for his dreams of a new Italian empire.

According to Maresita Nota who is in charge of the Ara Pacis project, Mussolini’s building is now in a state of advanced decay.

Yet despite the urgent need for the ancient altar to be rehoused in a climate-controlled environment, the decision to demolish Mussolini’s building has been controversial. Some Italian architects have called for the Fascist monument to be preserved.