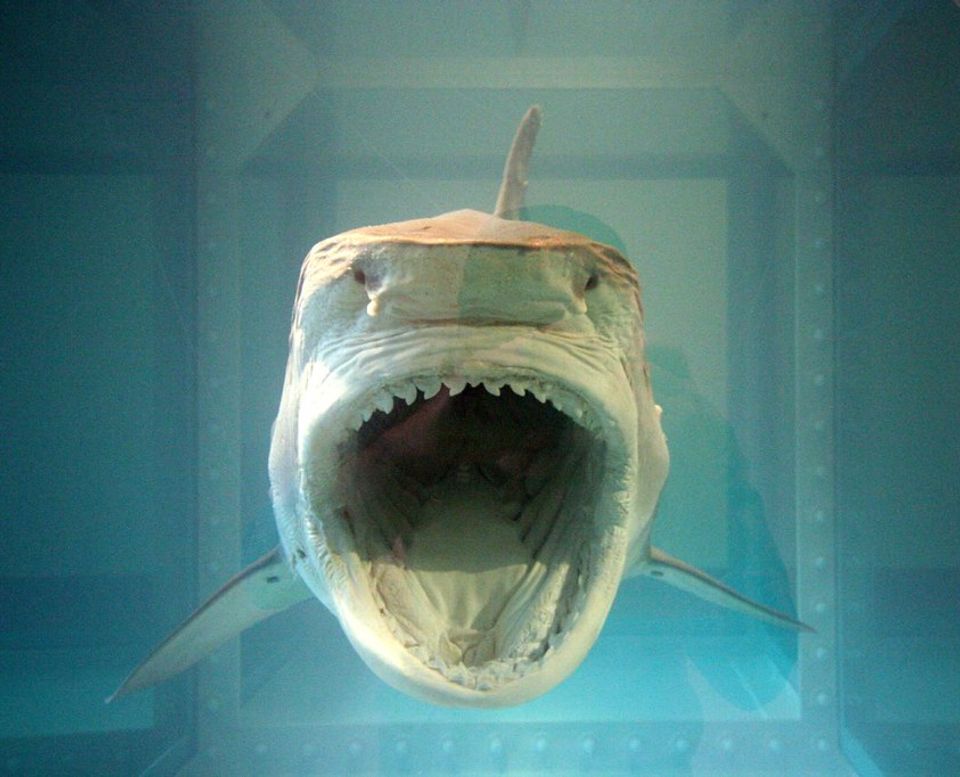 Damien Hirst, The Physical Impossibility of Death in the Mind of Someone Living (1991) Photo: Art Siegel on Flickr

All luxury markets depend upon the creation of rapid wealth, and if there has been one group which has epitomised this rapid wealth it has been the biggest beneficiaries of the financial boom of the last few years: hedge fund managers. Emerging from the ruins of the technology crash, hedge funds, investment funds with mandates which allowed them to consider just about any financial investment, and permission to both invest (go long) as well as speculate which markets were likely to fall (go short) conquered all. Their returns were so great, they were able to charge more than double the rates of normal fund managers; demanding, and receiving, 2% of funds under management (whether they made returns of not) and then taking 20% of the returns above a specified benchmark. Hence if a fund guaranteed a return of 10%, but made 15%, the fund managers received 20% of the 5% above the benchmark. In good markets that have prevailed until this summer’s upsets, this has proved to be something of a licence to print money.

Despite the excitement surrounding new wealth created in emerging countries such as Russia and India, auction houses and galleries alike believe that the biggest new group in the art market today are hedge fund millionaires (and billionaires). This is particularly true in the heated contemporary market. Steve Cohen, the current owner of Damien Hirst’s shark, is one of many hedge fund managers who spends his fortunes on acquiring art; as revealed by The Art Newspaper last year, much of the 1997 Royal Academy “Sensation” exhibition drawn from the collection of Charles Saatchi sold to buyers from the same industry. Such is the frenzy to buy contemporary art, that there are even firms being launched today that apply hedge fund techniques to the art market.

Such is the frenzy to buy contemporary art, that there are even firms being launched today that apply hedge fund techniques to the art market

But over the past few weeks, global markets—for both debt and equity—have had a rocky ride. On 18 July, the Federal Reserve chairman Ben Bernanke warned of a debt contagion from sub-prime (risky) mortgage lenders, which was followed by the effective closing of global debt markets and, more recently, a sell-off on global equity markets. By the middle of August, Goldman Sachs—one of the most influential investment banks globally—reported that its Global Equity Opportunities hedge fund had notched losses of $1.8bn.

At its most basic, the recent financial turmoil has been caused by investors realising that they had not charged enough for the risks they were taking. In correcting this, not only interest rates, but the premium above the interest rate that accounts for the extra risk (the spread) has shot up. It may be that art itself is not being bought with credit (in fact this is one of the key differences between today’s art market boom and that of 1990), but rising interest rates matter because both hedge funds and private equity investors pay for much of their other investments with borrowed money.

So what could this mean for art markets? Data has shown that these are only loosely correlated to the wider financial markets, which has often been cited as one of the attractions of art as an alternative asset. However, given the dependency that contemporary art—the main driver of today’s market—has on the newly rich hedge fund and private equity financiers, this seems an absurd contention. In fact, data from the past few years show a far greater correlation between the markets already.

Entrepreneurs may well make fortunes, but until they sell their companies, a good deal of their fortune is going to be tied up in them. For financiers, bonuses come annually at the end of the year, but with many planned transactions now “postponed”, the prospects for the annual payout are not looking promising. Take away the financial markets’ exuberance that follows easy money and many a luxury good looks like, well, a luxury.

How bad will it be? The first real test is going to be the London contemporary art sales coinciding with the Frieze contemporary art fair in October. What will happen then is difficult to say, but it is worth noting that financial markets are reluctant to do any deals at the moment, so it would be a brave art dealer who thought the contemporary art market could come through the coming months unscathed.

The good news is that looking beyond the next few months, it is not all gloom and doom. Already central banks are working to ensure a needed market correction does not result in a financial collapse. Crucially, if they are successful, and the betting must be that they will be, the substantial amounts of wealth generated over the last decade will remain. And so long as wealth is not destroyed, (the US Federal Reserve estimates losses from mortgages might be as much as $100bn, but the global bond market is worth $4,000bn) art buyers are not going to be selling.

And finance is about a lot more than hedge funds. One of the most impressive attributes of the entire financial sector has been its ability, decade in and decade out, to generate rates of return on investment well above that of any other industry. Where the next boom in finance will emerge is difficult to judge, but the rewards are so great, that you can depend on a good number of people looking for it.

• The writer is an economist in the City of London