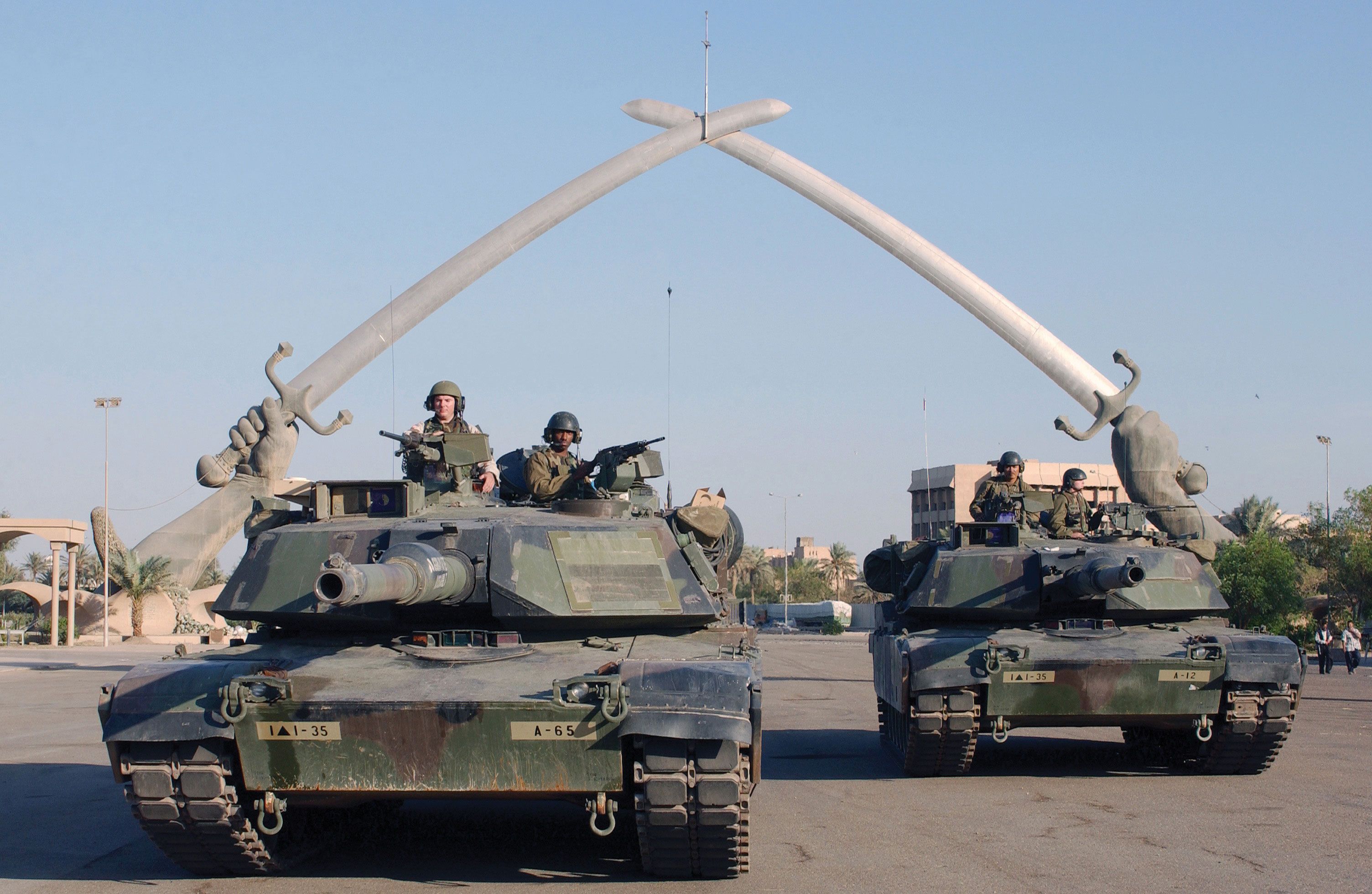 Since the fall of Saddam Hussein, there has been much debate in Iraq by curators, heritage experts and the public about what should be done with the monuments built by the late dictator. These works, especially the public sculptures, are undoubtedly visually menacing. The four gargantuan bronze-plated statues of Saddam’s head placed on top of his Republican Palace in the Green Zone are good examples of this aggressive type of art. These pieces were removed in 2003 (three of them were reportedly handed over to the Iraqi authorities while the fourth sculpture was melted down).

But a recent US military proposal to destroy the Victory Monument in central Baghdad, which commemorates the Iran-Iraq war (1980-88), is a bad one. It should not be demolished. The monument consists of two triumphal arches formed by two pairs of crossed swords cast out of the melted rifles of dead Iraqi soldiers. Enormous arms, modelled on Saddam Hussein’s own limbs, emerge from the ground to hold the swords. Surrounding the base are 5,000 Iranian helmets recovered from the battlefield. For both Iraqis and Iranians, the monument, unveiled in 1987, represents a conflict which affected almost every family in both countries. The war with Iran claimed the lives of over one million on the two sides and was a catastrophic event in the region’s modern history.

The memorial also represents ancient Iraqi art historical traditions stretching back 5,000 years. The sculptors of the Victory Monument, Mohammed Ghani and Khalid al-Rahal, worked in the conservation studios of the National Museum in Baghdad, restoring ancient Assyrian, Akkadian and Sumerian antiquities. They therefore studied the history of Mesopotamian art and their experience is reflected in the piece. The helmets of captured Iranian soldiers which spill out of nets at the base of the monument recall the battle, in around 2525BC, between two Sumerian city-states, Umma and Lagash, in what is now southern Iraq. Lagash’s victory was marked by Ningirsu, a Lagash god, holding aloft a net which contained the heads of Umma soldiers. The monument therefore represents the continuity of art in Iraq.

Since I left Iraq over a year ago, it has become clear to me that interested parties outside of the country are pushing for the destruction of this landmark in spite of its historical and artistic importance. Monuments such as these in Baghdad and other Iraqi cities must be preserved. Not just because of their artistic importance but also because they serve a powerful purpose as reminders of the horrors of war and Saddam Hussein’s legacy. They represent good and bad aspects of Iraq’s modern history and cannot simply be obliterated.

• Donny George served as chairman of the State Board of Antiquities and Heritage in Iraq until August 2006. Following death threats, he fled the country with his family. He moved to the US and took up a position as a visiting professor in the Department of Asian and Asian American Studies at Stony Brook University in New York State.

To the victor belong not just the spoils but the power to redraw the commemorative landscape. Following the defeat of the Nazis, for instance, the occupying Allies systematically destroyed Third Reich symbols. More complex was the Coalition destruction of Saddam’s monuments following the 2001 invasion of Iraq. Not only was the legitimacy of the conflict in question but the US military famously manipulated scenes of Saddam statue toppling for propaganda.

Donny George objected to US moves to flatten the Victory Monument in Baghdad which commemorates the Iran-Iraq war of the 1980s. While "victory" is a questionable concept for that horrific, unresolved conflict, the massive triumphal arches are a genuine, if distasteful, memorial that commemorates the war dead.

Confederate memorials across the southern US states, by contrast, are often thoroughly dishonest. They pretend to be grief-stricken monuments created at war’s end but many were erected up to half a century later when Jim Crow was in full cry and memorialisation had shifted from the cemetery to the town square. Here, they were used to perpetuate the lie that the war had been about state rights not slavery. They were also territorial markers used to control segregated public space; barely war memorials at all. They tell us about the values of those who placed them, but as damaging lies they cannot be allowed to stand unquestioned. — Robert Bevan, writer and director of the heritage consultancy Authentic Futures