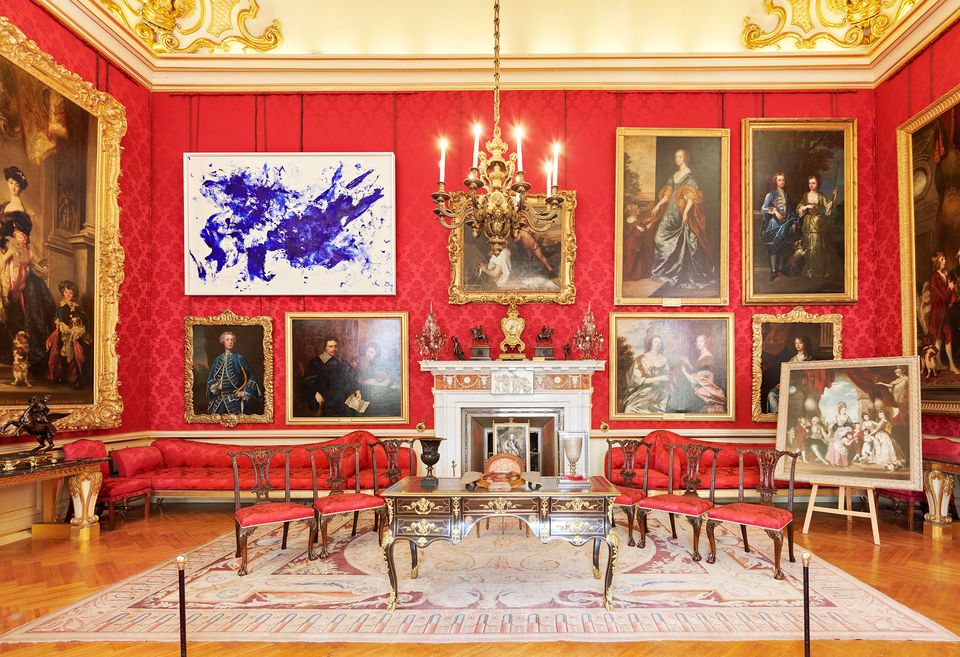 It was a strange sensation to walk through the Long Library at Blenheim Palace at the beginning of last week in the knowledge that just days before it had played host to a lavish ceremonial banquet for President Trump. However, while Mr and Mrs T and Mr and Mrs May, along with the Duke of Marlborough and their 100 or so guests, were all chowing down on their Scottish smoked salmon and Hereford beef, sadly they were not treated to the sight of 15 giant annotated photographs illustrating Klein’s legendary Paris performance Zone de Sensibilité Picturale Immatérielle (Zone of immaterial pictorial sensibility) (1962) that are now installed along the length of the space.

These—and most of the other works by Klein that now punctuate the pomp of Blenheim—were swiftly put in place in the wake of the Trump visit. But nonetheless, their proximity to the presidential presence gives the show a new frisson, which also extends to the title of this particular performance, given Mr T’s notorious lack of aesthetic (or any) sensibility. The idea of formally purchasing an immaterial artwork in a transaction involving the burning of the receipt and then tossing the money into the Seine would also have been utter anathema to the notoriously mercantile President Trump.

More in tune with the Trump sensibility would have been a spot of naked female Anthropometry painting, or at least Klein’s gold-leaf covered Table d'Or that is now installed with accompanying blue and pink tables in the adjoining Third State Room – who knows, he might have even bought a set for Trump Towers?

But happy at least that #trump would have walked past #yvesklein messing up the china (tho not as effectively as #jennyholzer ‘s human shoulder blades...) #blenheim @blenheimartfoundation #endorsingtrump

But the only works that were in situ on Thursday 12 July were the Yves Klein paint covered palette-plates that had already been installed amongst the cases of porcelain in the China ante room. Even though they were probably not big enough, gold enough or naked enough to catch the eye of Trump, hopefully they inserted a little of the mischievous spirit of their maker into the ether, and maybe brought about a little subconscious Kleinean subversion.