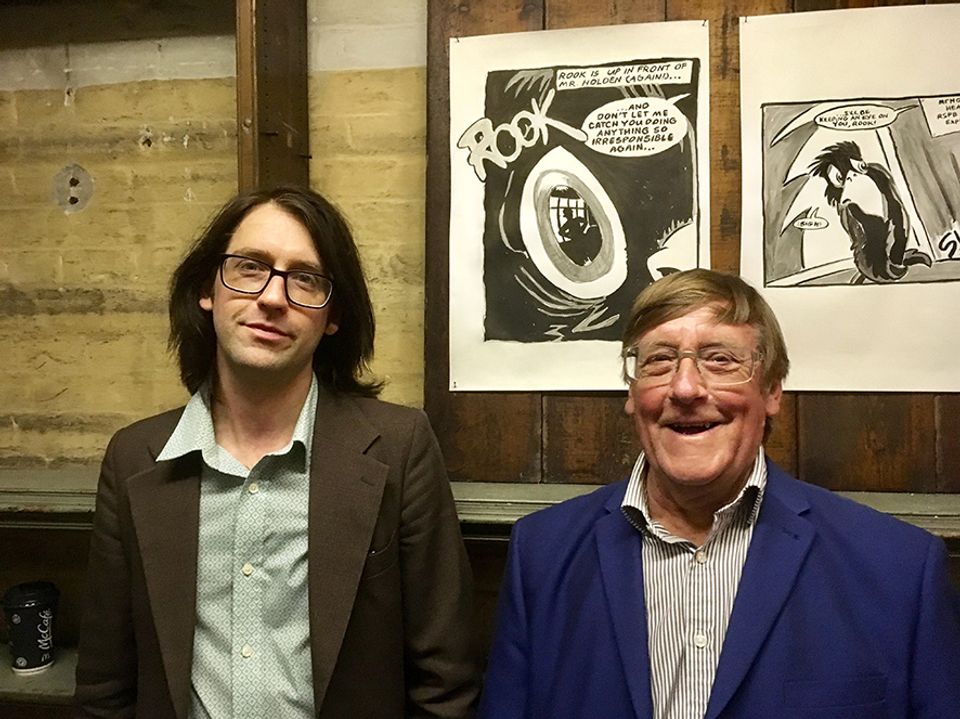 Artangel’s new commission Natural Selection fills the first floor and basement of the former Newington Library near Elephant and Castle, south London, with a captivating multimedia magnum opus. The show marks the culmination of the artist Andy Holden’s seven-year collaboration with his father Peter, a leading ornithologist who worked for the Royal Society for the Protection of Birds (RSPB) for 45 years.

Using film, sculpture, music, archival material and natural specimens, Holden and Holden explore both the natural art of bird nest building together with the human and quintessentially English art of egg collecting. Along the way, this wonderful and idiosyncratic show offers both a wealth of compelling information on matters avian and—by tracing the history of egg collecting (AKA oology) from its origins as a 19thcentury eccentric aristocratic pursuit through to its heyday as a scientific study and widely encouraged childhood hobby up to its current discredited and criminal status—also throws in a unique slice of English social history for good measure.

Another aspect of the project is the connection between ornithology and art, and the role played by each in the evolving relationship between father and son. For despite infant Andy in his high chair being a poster boy for the RSPB’s Young Ornithologists’ Club founded by Peter Holden (which then became the largest wildlife club in the world) he did not initially share his dad’s passion.

“I grew up not particularly interested in birds, I was more interested in art—I had to find my own way,” he told me at last week’s preview. It was only on finishing his art studies and returning to the family home that Holden Junior was apparently inspired by the sight of a blackbird building its nest and started collecting birds’ nests “for their sculptural qualities, as part of my art”. This offered the starting point for the extended conversation between artist son and naturalist father, which now plays out in Natural Selection. 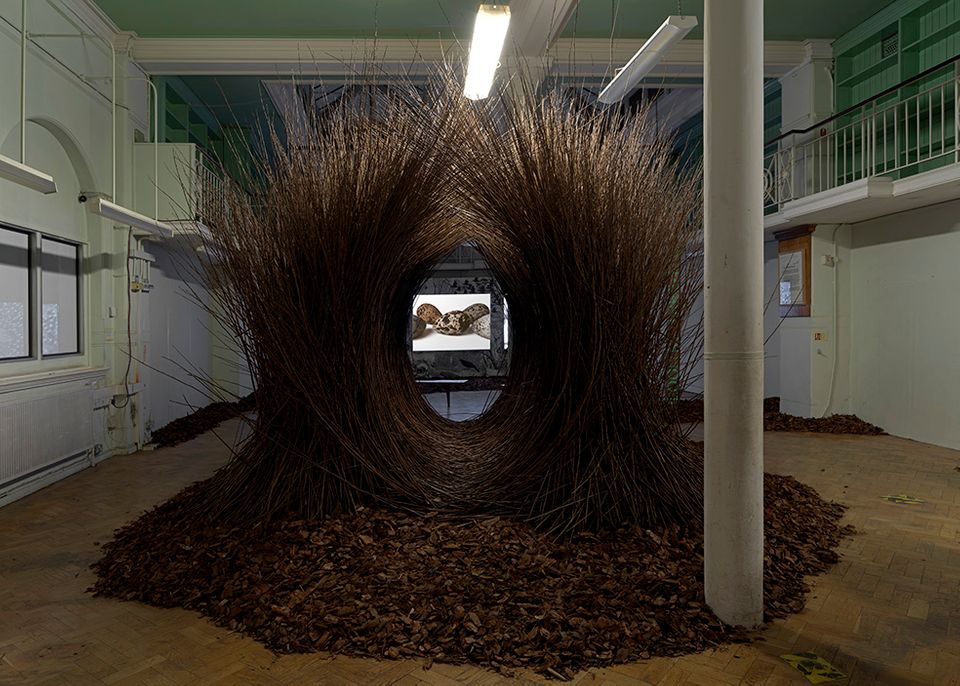 These differing but complementary perspectives—or what Peter Holden describes as their “push and pull between aesthetics and information”—form a dominant theme in the exhibition. They have also offered father and son new areas of interest. A feather collector himself, with many of his carefully classified specimens included in the show, Peter admits to his eyes being opened by his son’s unfolding interest in nests, an aspect of bird study, which he had largely overlooked. “Nests are a neglected area of study even though every species builds a different nest and they are arguably as individually distinctive as a bird’s plumage or song,” he says. Andy’s nest collection is in the same room, arranged like sculpture in a vitrine.

In the split screen film A Natural History of Nest Building, father and son both appear in presenter-mode, sharing their different perspectives in a double-act lecture beginning with the humble blackbird’s nest outside the Holden family home and covering the nesting peccadilloes of house martens, weaver birds, rooks and the cuckoo, to name but a few. It ends with the extravagant creations of the bowerbird, considered by Charles Darwin as the closest thing to an artist found in nature. The film is framed by Andy Holden’s giant sculptural reconstruction of the arched structure against which male bowerbirds strut their stuff: intricately woven in willow and scaled up to ceiling height, it makes bowerbirds of us all.

The darker side of avian obsession is addressed in the dank basement spaces where another film covers the vexed subject of egg collecting. This is narrated solely by Andy, this time appearing in the guise of a talking animated rook, ostensibly the older and wiser incarnation of the mischievous cartoon corvid featured in his father’s early RSPB magazines. In an adjoining room, a jaw-dropping installation recreates the obsessively acquired hoard of 7,130 bird eggs uncovered in 2006 when the police and the RSBP raided the flat of the notorious egg collector Richard Pearson. The haul surpassed that of any public collection in Britain but despite its scientific value was destroyed in its entirety to discourage any future collectors. 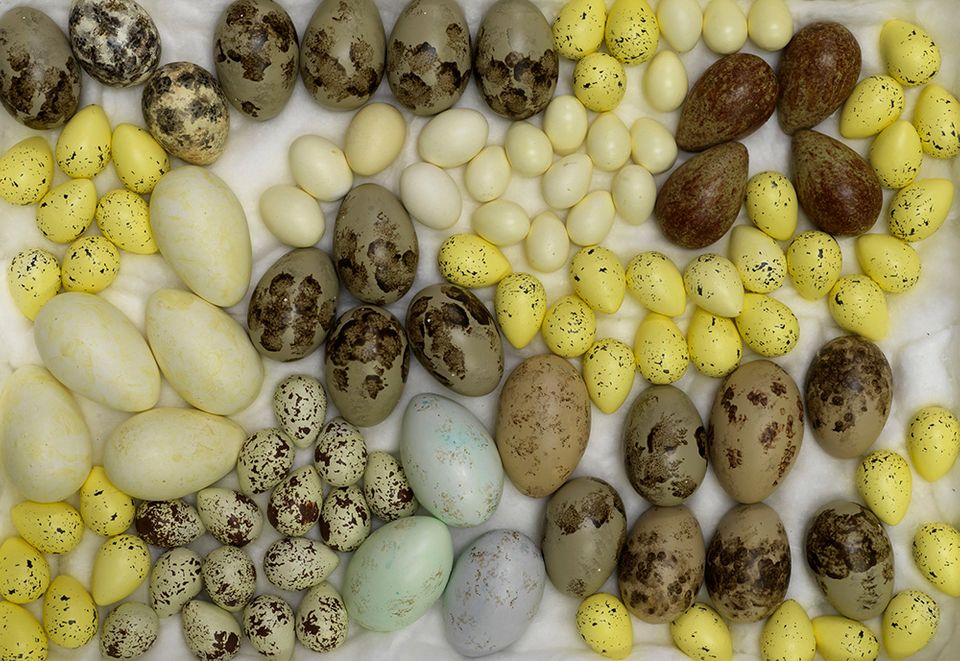 Detail of Artist Was Led to the Study of Nature in Andy Holden and Peter Holden: Natural Selection An Artangel commission. Photo: Marcus J. Leith

Now, arguably as obsessively if not so destructively to the bird population, the multitude of eggs has been meticulously recreated in porcelain and is displayed exactly as it appeared in the press at the time, stashed in numerous biscuit tins and takeaway boxes. Apparently, it was the newspaper photograph of Pearson’s devastating haul on which the piece is based that also first triggered Andy Holden’s interest in bird eggs. This unexpected entry point is indicated by the work’s title, How the Artist Was Led to the Study of Nature. “I now feel like an honourary oologist”, admits Andy, who was responsible for the wall chart that exhaustively identifies each replica egg.

It is especially appropriate that this glorious and multi-layered testament to father and son teamwork is housed in the former home of the Cuming Museum, whose collection of archaeology, anthropology and natural history was put together by Richard Cuming and his son Henry Syer Cuming in the 19thcentury. (The museum was closed by fire in 2013). However, the Holdens were very happy to inform me, and I was happy to hear, that they emphatically do not share the Cuming’s apparent enthusiasm for acquiring numerous specimens of bird’s feet.