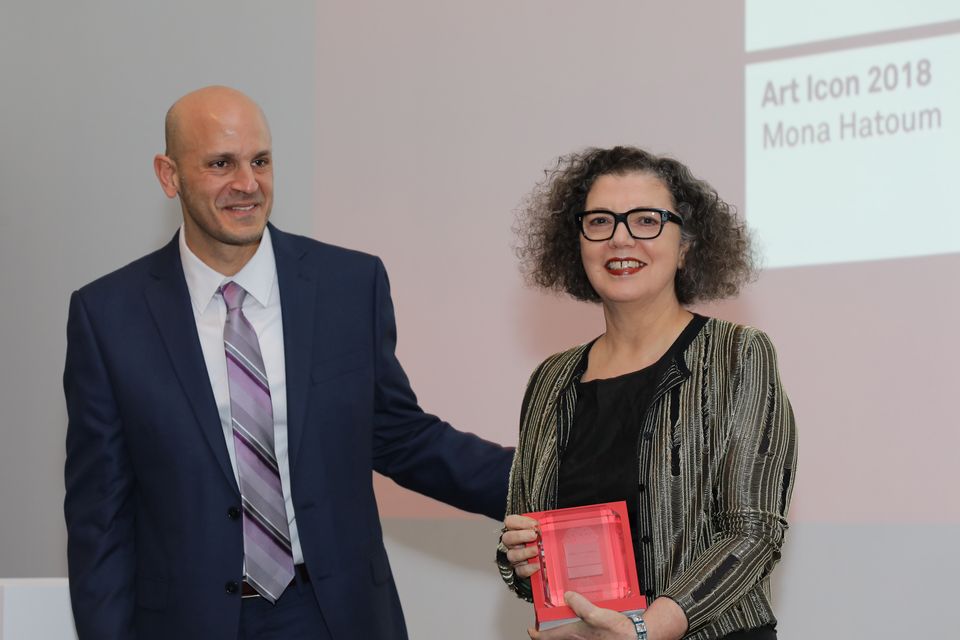 Although every table was sparkling with drifts of Swarovski crystals provided by the evening’s sponsor, the mood was more sombre at Monday night’s (29 January) dinner to honour this year’s designated Whitechapel Gallery Art Icon, the Beirut-born, London-based artist Mona Hatoum. Addressing the 200-strong crowd of diners gathered in the Whitechapel’s downstairs galleries—which included the sustainability champion Livia Firth, the art dealer Jay Jopling, the Tate Modern director Frances Morris and the artists Florence Peake, Christian Marclay, Emma Hart and Zineb Sedira—the Whitechapel’s director Iwona Blazwick emphasised the relevance of Hatoum’s work and the current need for community at a time when “the world seems to be moving towards greater isolationism and greater division”.

Blazwick described her first encounter with Hatoum’s early work—which was a sculpture titled The Light at the End (1998), made from the glowing bars of electrical heating elements—as “offering hope while delivering danger”. She also paid tribute to the artist’s continuing ability to subvert the domestic and explore themes of identity and geopolitics. Before dinner the guests had been able to experience this dangerous, politically-infused domesticity first hand in the form of Hatoum’s “Welcome” doormat made from thousands of steel pins, which is currently on show in the Whitechapel’s upstairs galleries. Although made in 1996, the piece seems directly relevant to the present fate of refugees fleeing to Europe.

The contemplative tone of the evening was also reinforced by a recital from the Palestinian-American poet and physician Fady Joudah, who evoked richly metaphorical and Hatoum-relevant images of apricots, spider’s webs and human hair—not something that usually takes place at spangly gala dinners. However, having pause for thought did not deter some busy bidding at the ensuring auction and overall the evening raised £196,875 for the Whitechapel’s education and community programmes. For her own part, the 2018 Art Icon, who for the past 40 years has lived just round the corner from the gallery, declared that it was “great to be recognised right at my doorstep”. All in all, a fitting tribute to the power of a creative community.