Diary: Grimes hits the decks, the art of small business and Frieze LA hits the rocks (in a good way) 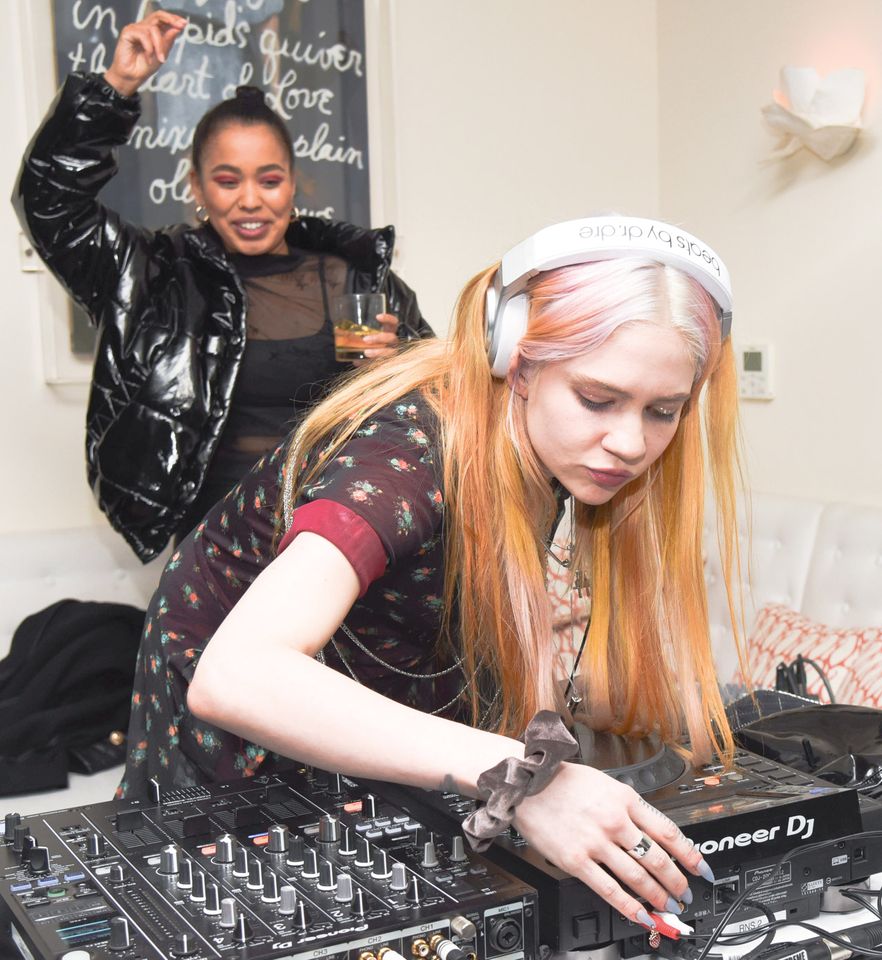 Grimes gets into the groove at the James Turrell party BFA

There was a battle of the art bashes earlier this week when White Cube and Pace galleries hosted their Frieze Week LA parties on the same night, drawing an impressive mix of pop stars, movie icons and art world royalty (naturally). White Cube guests such as the singer Usher and the UK aristocrat Lady Victoria Hervey thronged the corridors and hallways of the historic hotel, the Chateau Marmont, marvelling at the entertainment including a marching band from Compton High School. Meanwhile, the Pace party, nestled in the San Vicente Bungalows, garnered collective laughter when the gallery’s chief executive Marc Glimcher took to the mike twice, after he “fucked up” the first time, forgetting to namecheck Kayne Griffin Corcoran gallery (both dealers have launched a crowdfunding campaign to support James Turrell’s Roden Crater in northern Arizona). Although White Cube’s Marmont party was packed to the rafters, the celeb-to-pleb proportion was much higher at Pace/KGC’s soiree in the San Vicente Bungalows, with the likes of Leonardo DiCaprio mingling in his baseball cap, pop star Grimes playing the deck—later visited by her billionaire beau Elon Musk—and the presence of the tennis superstar Maria Sharapova. Game, set and match to Turrell. 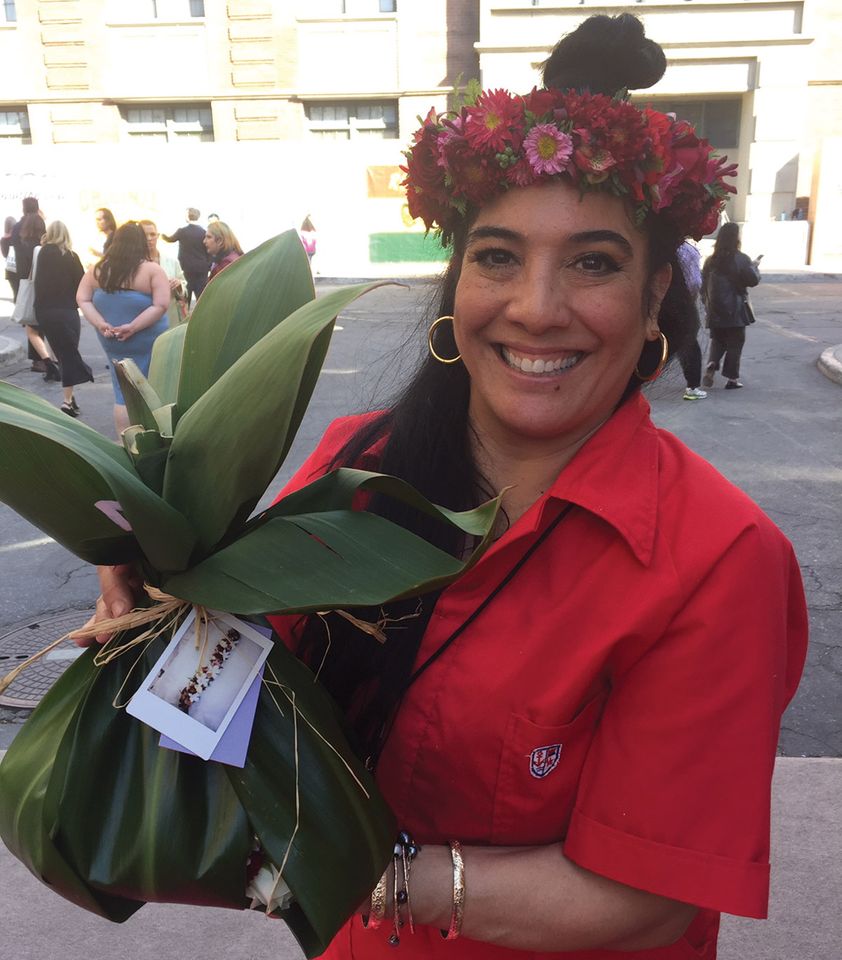 An idealistic spirit reigns at Frieze’s new backlot artist street fair, where politics and philosophy inflect the entrepreneurial pitches of artist-run enterprises. Gyopo, a coalition of diasporic Korean art professionals, is hawking Shigenobu Twilight, tiny bottles of fragrance mixed by the conceptual artist Anicka Yi and enclosed in white resin skirts with a mushroom motif. Gyopo says the strong scent, which morphs depending on the wearer, is meant to challenge traditional notions of femininity. Artists for Democracy is selling “Dose Trump” bumper stickers, colourful “democracy mugs” and sets of ten silkscreen prints with political messages, all with the goal of getting the vote out this autumn. (“Make America Again,” Lisa Anne Auerbach’s signed print implores.) And Pretend Plants and Flowers is offering a mix of fresh, dried and faux blooms, including a real flower lei in a traditional Hawaiian tea-leaf gift wrapping. “It’s about the space between things that look real and things that look fake, and knowing what’s what,” says the company founder Ezra Woods, who describes his venture as strictly “uncynical”. Like the inspirational Chinese objects known as scholars’ rocks, every stone in an offbeat display at Frieze Los Angeles has a distinctive je ne sais quoi. Each of them has been painted, adorned or otherwise manipulated by an artist, and all are for sale to online bidders, with the goal of raising money for the non-profit California arts organisation High Desert Test Sites, founded by Andrea Zittel. The auction began last weekend but gained momentum when the little rock stars made their fair debut in the backlot on Thursday. The artist Pam Lins decorated a rock to resemble what might be a schnauzer’s face, while Landon Wiggs attached his rock to a tiny toy car; Jim Kanter’s declares “NO I WON’T,” with the letters outlined in yellow sand. “I’m in love with this,” declared one fairgoer, Farhad Farman, admiring a rock encased in cling wrap by the artist Gerald Clarke. He let out a sigh. “Inverted pleasure.” 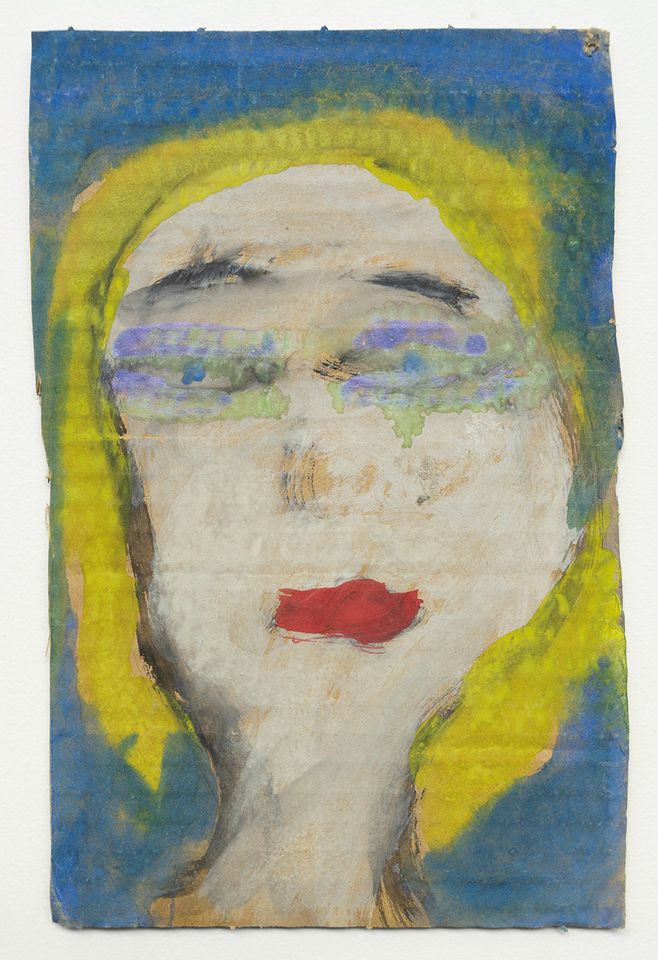 Bygone celebrities, all made up

Queer icon Vaginal Davis is making waves at the Felix art fair with new abstract portraits—on show with Adams and Ollman gallery—depicting forgotten Hollywood actresses. Frances Farmer and Carole Lombard are the bygone movie stars portrayed in her latest works, forming part of her signature Make up series. An earlier portrait of Barbara Bel Geddes (2012), who famously played the matriarch Miss Ellie in the soap opera Dallas, was made from (wait for it) Britney Spears eye shadow, Wet n Wild nail polish, Afro Sheen hair conditioner and Aqua Net Extra Super Hold hair spray. Cosmetics aside, Davis’s pictures draw neatly on film history: who knew, for instance, that the penthouse suite of the lavish Hollywood Roosevelt Hotel where Felix is held was once home to 1940s Hollywood power couple Clark Gable and Lombard? An early-morning cycle class is the key to Frieze success Photo taken by Natasha Spencer of Totalshape.com

Gallerists get in a spin

Long days of stand-tending and late-night parties can make Frieze feel like a physical battle, but the art world’s gluttons for punishment are kicking their fair training into high gear this year. West Hollywood’s newly opened Aarmy pop-up—a boot camp-style fitness studio designed to let clients feel “as if they are students in an elite athletic academy”, as its co-founder Trey Laird told the Los Angeles Times—has been raking in the fair’s clientele. Representatives from galleries like Pace and Lehmann Maupin have been spotted at the studio’s early-morning cycling classes along with the singer Usher, who squeezed in a workout before heading to Frieze’s VIP preview on Thursday. 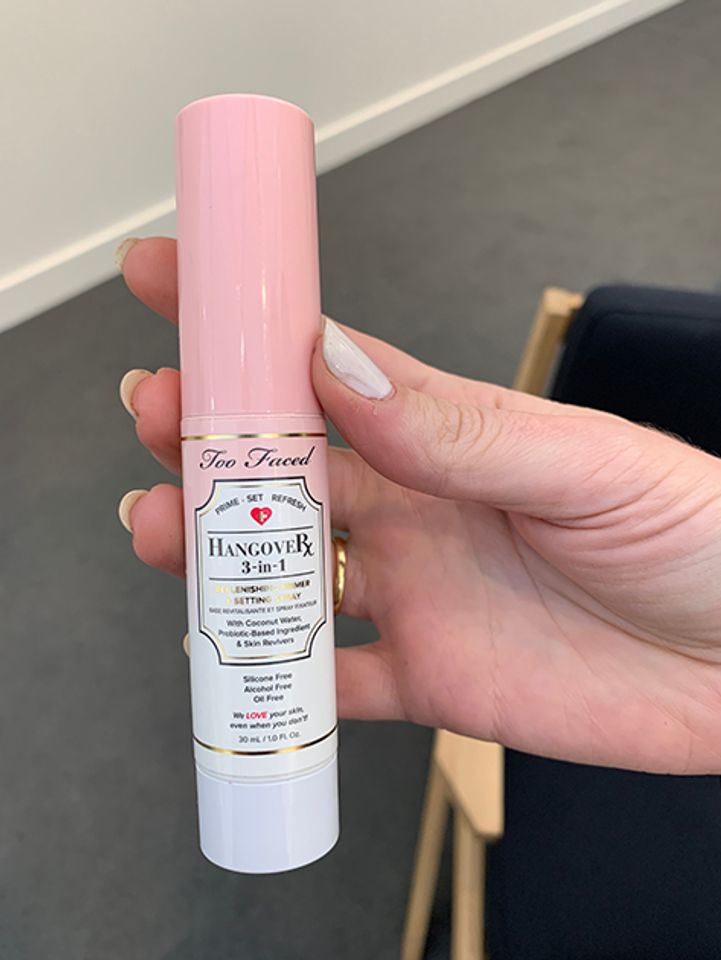 What does every hard-working dealer, standing hours on end at Frieze Los Angeles, need to keep their complexion looking youthful and unblemished while they face query after query from hungry collectors desperate to secure the latest trophy works? None other than the Hangover 3-in-1 spray from Too Faced cosmetics, which promises to “prime, set, refresh”. The anonymous dealer who covers herself in this elixir of youth told us that “under these lights, this spray is essential, goddamn.” We love the tag line also: “We love your skin even when you don’t!” Gallerists everywhere must be buying it by the gallon… 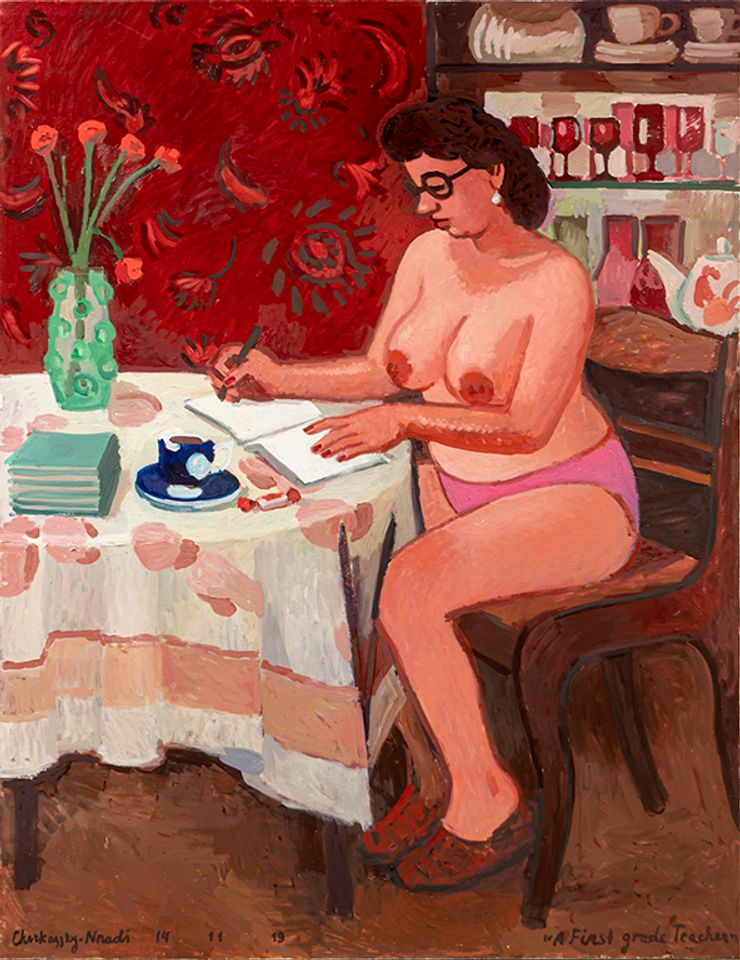 Courtesy of the artist and Fort Gansevoort Zoya Cherkassky, A First Grade Teacher (2019)

Last year the artist Zoya Cherkassky was stunned by the reaction to her New York show Soviet Childhood, which attracted a stream of foreign-born visitors who picked apart her memories of growing up among quintessential household objects in Kiev. Now she and the gallery Fort Gansevoort are wondering what kind of audience a Los Angeles sequel opening Saturday will attract. Among her favorite works in the LA iteration is Le Déjeuner Sur L’Herbe, a bucolic family gathering on the banks of a lake that she says was inspired by the works of André Derain. More surprising is A First Grade Teacher, in which the title figure sits at a table writing lesson plans while largely naked. “It’s an erotic fantasy of schoolchildren,” Cherkassky explained while giving a tour of her paintings blending Socialist Realist, early Modernist and manga styles. “Communicating is important to me,” adds the Israel-based artist, who blogs in Russian, Hebrew and English about her work. “I want to get through barriers.”

There are plenty of pooches dotted around the aisles of Frieze Los Angeles this year, but not all of them are finding favour with fair officials. The lovely Luca, who has an Abstract Expressionist-style black dot on his head, was happy to stroll and sit at ease, but an eagle-eyed fair attendant was quick to point out that all dogs must be kept on a leash (in case they get over excited on seeing the Minimalist sculpture, no doubt). Another marvellous mutt was also seen placidly strolling the stands, looking a lot like Dorothy’s best friend in the Wizard of Oz. “He’s called Toto,” quipped his proud owners as if on cue, adding in haste: “He’s not really, he’s called Pablo, after Picasso.” 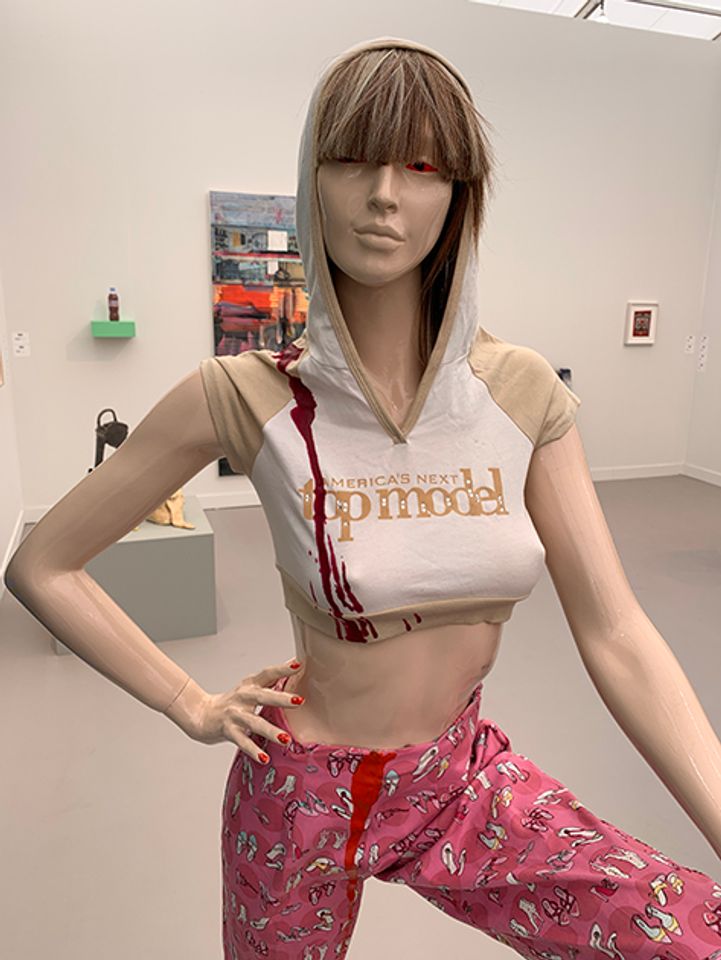 Who is that supermodel in the corner? It’s not really a pin-up but a mannequin made by the New York-based artist K8 Hardy called Look 14 (2016). The striking sculptural piece, on show at Karma International gallery, is typical of K8’s subversive take on beauty today. “She uses fashion as a sculptor would use clay,” says Geraldine Belmont of the gallery. “K8 was already focusing on all those things that are hip now such as queer identity and selfies.” This moody model looks even more glamorous with its hair blowing thanks to a nearby air duct which is sending gales through the aisles. “That wasn’t planned, by the way,” added Belmont. 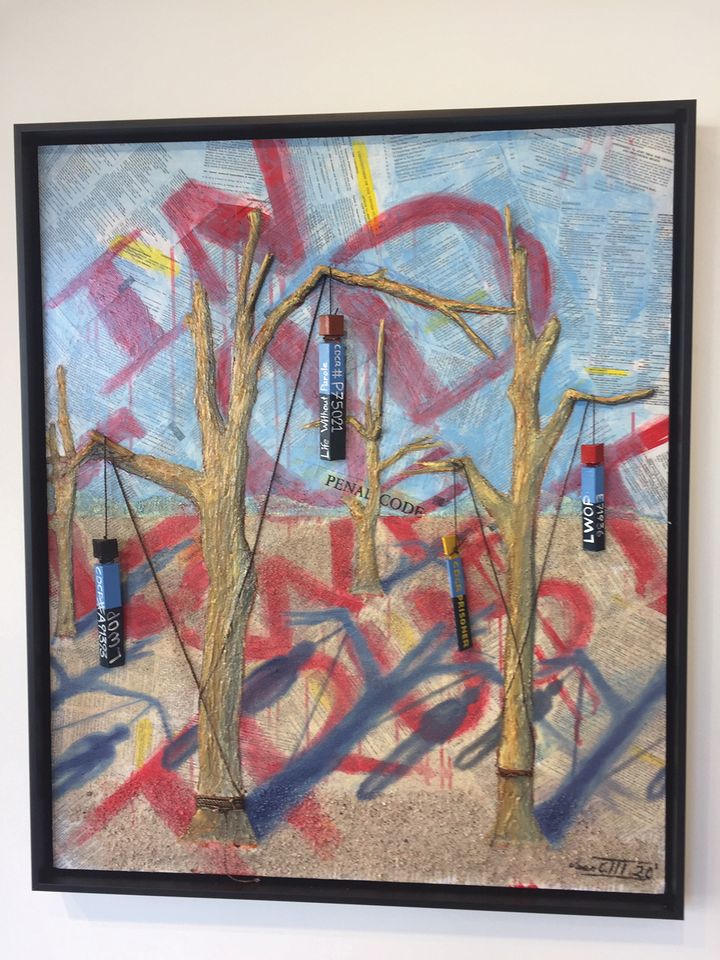 The 10 artists in the exhibition Out of Bounds on the Frieze backlot share a common history: all have participated in a novel studio programme at the California State Prison in Lancaster. Mostly self-taught, they have pooled their talents and coached one another while working in the studio, sometimes as often as seven days a week. The tightly curated show of their work at Frieze, sponsored by the Endeavor Foundation, attests to the starkness of prison life as well as the social forces that keep the incarceration rate so high: Kenneth Webb and Victor Tapia’s paintings of youths make clear that they are destined for the cradle-to-penitentiary pipeline. Particularly striking is Juan Tercero’s collaged work made from scavenged materials, including photocopies of the state penal code and sticks dropped by birds onto the prison yard.

Singing and chanting, an array of Hollywood names including Joaquin Phoenix and Norman Lear joined the actress Jane Fonda last week as she took her Fire Drill Fridays campaign against global warming to Los Angeles. Her climate change rally outside City Hall drew a crowd of a few hundred, securing a West Coast presence for a protest movement that had until now unfolded on Fridays in Washington, DC. (The 82-year-old Fonda and other celebrities have been arrested multiple times there.) The actress’s role in the Netflix series Grace and Frankie currently requires her to be in Los Angeles, so the rallies will be held on the first Friday of each month in California. In advance of Frieze LA, Fonda joined the artist Judy Chicago in a conversation with the curator Hans Ulrich Obrist for a fair publication. “Civil disobedience and getting arrested must become the new normal,” the actress said.