Lydia Ourahmane sends out vibrations at the Chisenhale 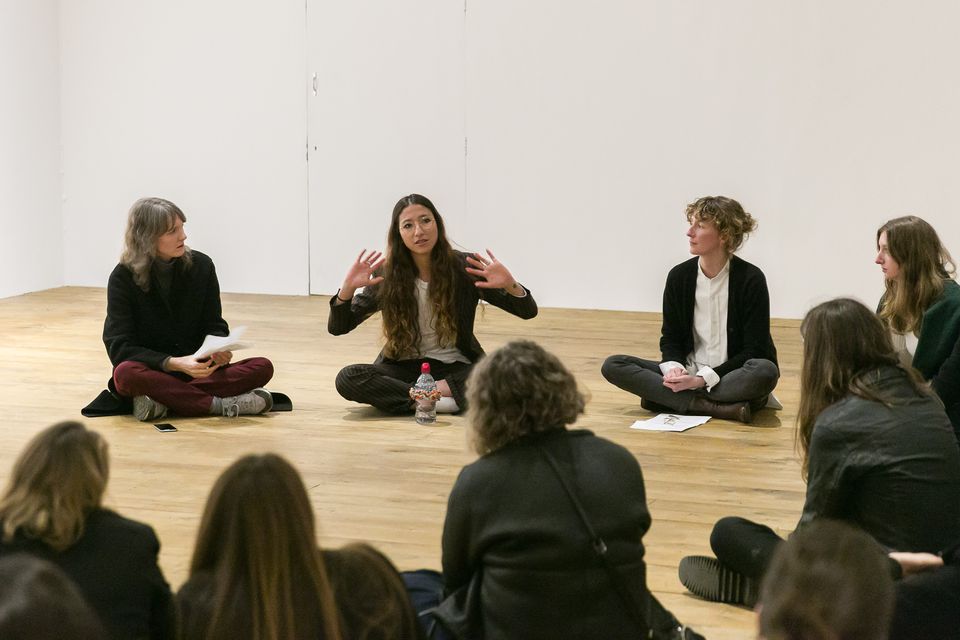 Lydia Ourahmane’s ash and chalk wall has been crumbling into a state of sonically-induced disintegration at the New Museum Triennial in New York; and on this side of the pond the physical as well as the aural impact of sound also plays a major part in The You in Us, her solo exhibition at Chisenhale Gallery in London. Last Tuesday (13 March), the British-Algerian artist’s particular power with vibrations was directly experienced by Chisenhale patrons and friends, including the artists Caragh Thuring, Rosalind Nashashibi and Yuri Pattison, who were instructed to sit (or lie) on a specially installed temporary wooden floor, and listen to Ourahmane in conversation with Chisenhale Director Polly Staple. At the same time they were also hearing and feeling the tremors and tremblings of Paradis, an hour long soundscape emanating from twelve transducer speakers and twelve amplifiers embedded beneath the floor, and named after Paradis Plage, a coastal area of Oran.

Ourahmane’s show draws on personal and family experiences and extensive time spent by the London-based artist in and around the family home in Oran, Algeria to address wider issues of displacement, immigration, absence and presence and charged spaces. You don’t get much more visceral than having one of your artworks drilled into your skull and the show’s main talking point has been the pair of gold teeth, one mounted on the gallery wall, the other permanently embedded in the artist’s mouth. (Both were made by melting down a gold chain purchased by the artist in Oran for €300—the price of a boat passage from Algeria to Spain. They also relate to the fact that Ourahmane’s grandfather had all his teeth removed in order to avoid being drafted into the French army in the Second World War)

Paradis might fill the gallery with sound but in a very particular way it also offers an intense bodily intimacy as it reverberates through the bodies of visitors, immersing them in ambient audio recorded in and around the streets of Oran, as well as recorded compositions by Ourahmane and friends. This includes the classically trained artist playing the violin and the Gombri, a traditional Algerian instrument used in Sufi music, which is apparently used to induce a state of trance - although everyone appeared to remain alert on Tuesday.

Ourhamane was also combining sound with a different form of private encounter last weekend when she and her musician friends and housemates—some of whom had collaborated on Paradis—threw open their cavernous Brixton live-work space to a multifarious musical event-cum-installation last Saturday (16 March). She wasn’t playing herself, but orchestrated the proceedings, with musicians performing in all the bedrooms and even the bath rooom. In her own room there was Alex White from the band Fat White Family on saxophone and John Moody on clarinet, with the music producer Felicita playing an organ in another. There was a bar in the kitchen and at one point everyone crushed in for a jam session in the bathroom as all the different instrumental elements were electronically mixed to reach an amped-up crescendo. While no more invitations from Brixton basements are imminent. This week offers the final opportunity to view—and feel—Ourahmane’s Chisenhale show. And also to leave your own trace, with the marks of all visitors passing through the specially treated silver-plated brass doors acting to rub off the tarnished surface and reveal the gleaming silver beneath.