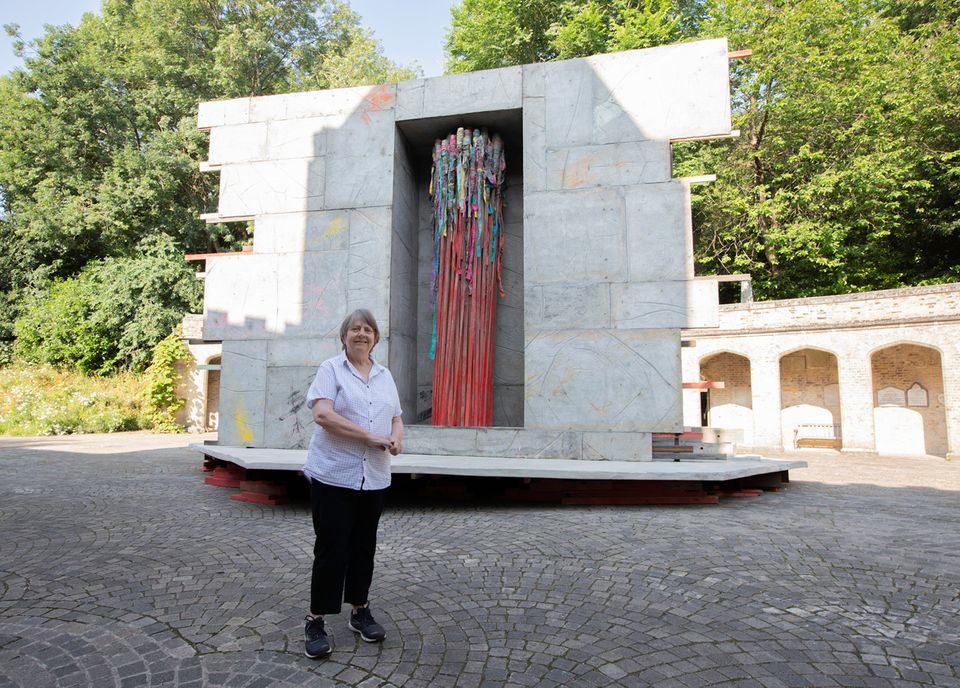 Phyllida Barlow works on a monumental scale but in the most unmonumental of styles. Her sculptures are usually made from materials typically found in a builder’s yard, such as wooden offcuts, scaffolding poles, concrete finishes and lengths of gaffer tape. Her colours—day-glo pinks, reds, green and turquoise—are also at odds with the gravitas commonly associated with sculpture. Sprayed, daubed and grungy they are more reminiscent of hi-vis and hazard warning signs than Pop Art sheen.

Her British pavilion for the 2017 Venice Biennale positively exploded with towering, teetering columns and bulbous boulder-like protuberances. And these unruly works, which she has likened to "unwanted guests" have been shown in a number of other august institutions, including Kunstalle Zurich, Nasher Sculpture Center in Dallas, the Royal Academy of Arts and Tate Modern’s Turbine Hall. 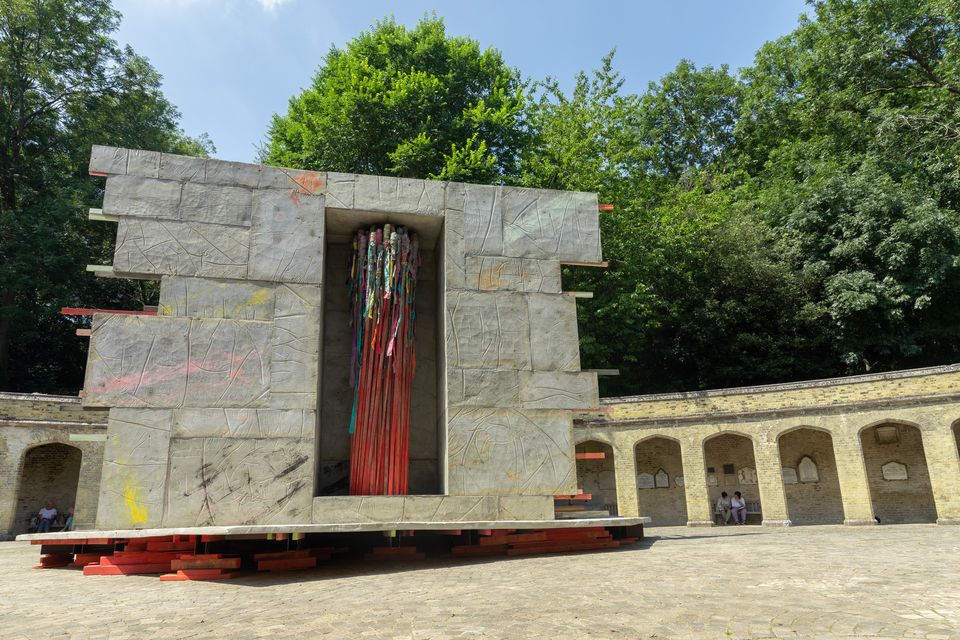 Now one of her imposing, mischievous structures is keeping company with the sedate memorials of Highgate cemetery in North London, the final resting place of Karl Marx, George Eliot and Henry Moore, amongst many other luminaries. Measuring over five-m-high, Act has been commissioned by the not-for-profit Studio Voltaire, which commissioned the 77-year-old artist’s international breakthrough show in 2010; it forms Barlow’s response to what she sees as the “ambiguous authority” of these funerary monuments.

From the front it disrupts the calm colonnades of the cemetery's west entrance with what appears to be a chunk of giant wall, with a large central niche containing a bundle of red poles wrapped in tatty multicoloured fabric. These could be standards from some hard-won battle, or the relics of an ancient funerary rite. But round the back the solid masonry reveals itself to be a giant stage flat made from pink plywood panels faced with concrete screed and propped up by a forest of steel struts.

Sculptural solidity gives way to flimsy artifice, with no attempt to prettify its roughly put-together parts. The entire edifice teeters on a low platform, roughly supported by more workaday pieces of wood and metal. It all looks highly precarious—but it obviously isn’t.

“We have to activate sculpture, to make it do something, says Barlow, explaining that the idea behind Act was “a fake, a folly, a sort of shadow play of the objects around it.” 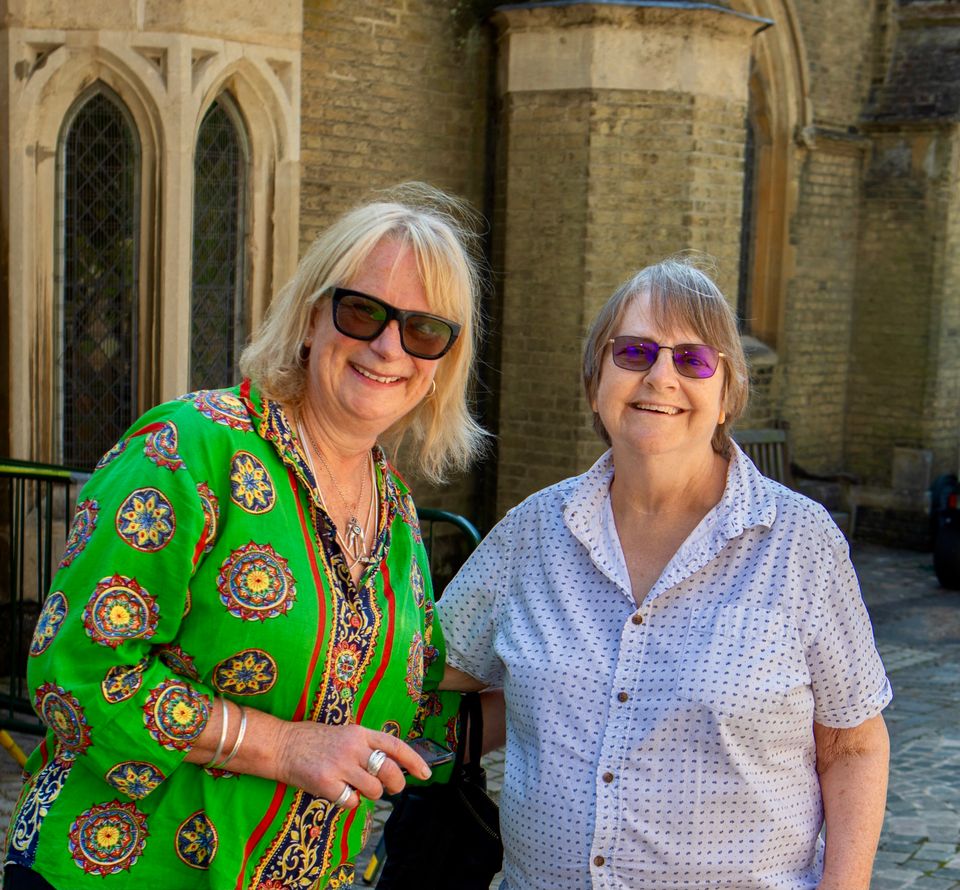 She also relishes the way in which, at odds with their solemn sepulchral function, cemeteries are famously sites for the most lively forms of clandestine carnal activity. Nothing is what it seems, and everything has its darker side. “These monuments are all so watchful, there’s this feeling of potential, that anything could happen—especially after dark,” she observes. Hovering above the ground, offering up its battered, painted ceremonial poles and roughly shored-up around the back, Act is also charged with a rough, dynamic, slightly dangerous impermanence.

Certainly a lot of energy was expended in creating the work, which turned out to be a hands-on, all-hands-to-the deck experience for Barlow and her team. It was a stark contrast to the Covid-19-postponed solo show that she has also just opened at Haus der Kunst in Munich, which was entirely installed via Zoom. Voltaire had originally commissioned a work for Nunhead Cemetery in South London. But then the chapel in which her pieces were to be housed was declared unsafe and at the last minute she had to adjust to a new site and create a much larger work that would be entirely exposed to the elements, albeit only until 30 August. “We had to turn it round in just over five weeks,” she says.

At the same time, Barlow has also been working on an even more temporary and theatrical enterprise: a set for the Bavarian State Opera’s new production of Mozart’s Idomeneo, directed by the Brazilian Antú Romero Nunes.

It’s the first time she’s designed for the opera and she enjoyed being, as she puts it, “a visitor in that world”. Nonetheless she still insisted that considered her sculptural sets to be an active protagonist rather than a mere backdrop. “I was talking to the director about the absolute paradox of bringing together an orchestra, conductor, singers, staged space and fivereally heavy rigs for something that disappears once you have seen it,” she says. “What is it about human beings that makes us want to do this?”

What indeed? Like great opera, Barlow’s full-throttle and famously impermanent work shares this “innate ephemerality,” pushing the emotions to the max and leaving lasting reverberations long after its final act.