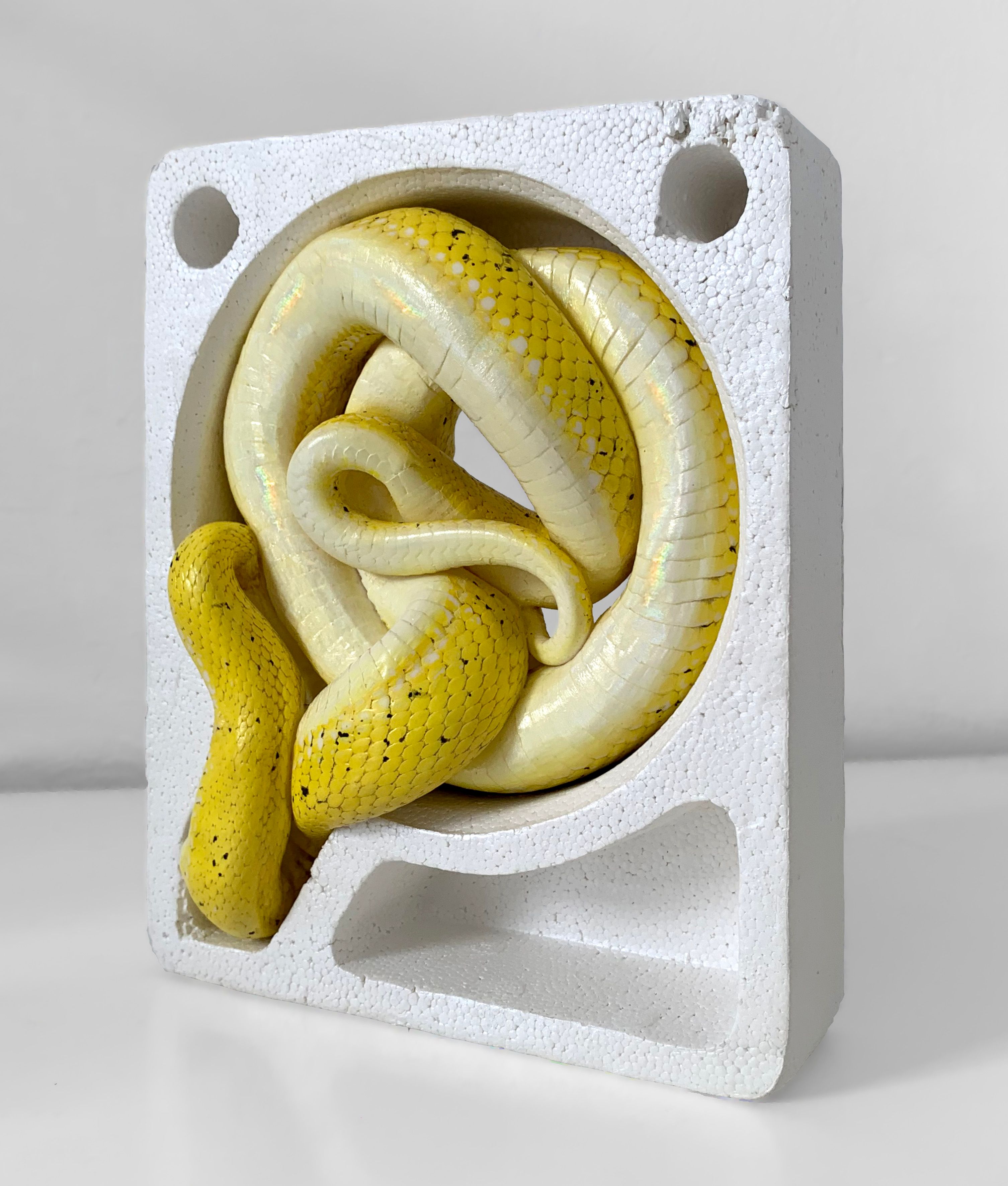 Polly Morgan’s new serpentine sculptures at the Bomb Factory in North London are both gorgeous and repellent. The works, many of which were made under lockdown, whip up a plethora of Freudian associations in their suggestive forms and unholy alliances of unexpected materials.

The body of a yellow snake overfills the cavity of what looks like polystyrene packaging. Another cluster of snake coils threatens to burst through a hole in a square grey block of stony concrete. Every single scale has been meticulously treated with manicurist’s films, giving these bulbous, twisting bodies a glamorous, opalescent sheen. Look closer and it becomes evident that the seemingly functional protective foam corners and white polystyrene casing also have a discreetly lacquered pearly gleam. Not as cheap and disposable as you first might have thought. 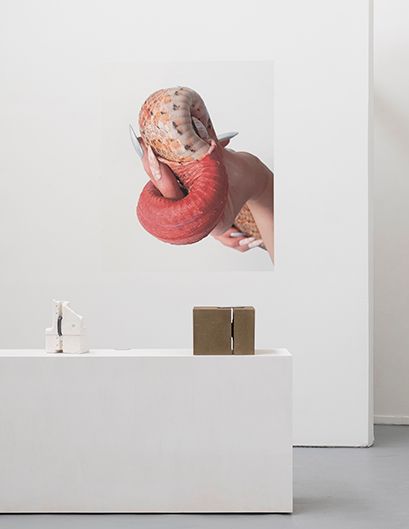 Installation view of How to Behave at Home at the Bomb Factory Art Foundation © Polly Morgan. Photo: Ibrahim Azab

Morgan is known for her use of taxidermy, but here the snake sculptures are made from polyurethane replicas, although they look just like the real thing and pack the same emotive punch. Repeatedly, these works' surfaces give off mixed messages about the reality within. However there’s no doubting the visceral authenticity of the very raw material used in an accompanying series of large-scale colour photographs. Here the artist’s hands, adorned with meticulously decorated acrylic talons, peel back the skin of snake carcasses with an elegant forcefulness to reveal the silky, translucent pink flesh beneath. The effect is simultaneously excruciating, outrageous and savagely erotic. And like all of Morgan’s work, it is rendered with exquisite precision.

More audacious material combinations are found in two small wall-mounted works, which incorporate the prickly pelts of roadkill hedgehogs. One is partly smothered within a smooth dollop of creamy blue plastic, another bristles out of the top of a pastel pink cube resting on a block of baby blue foam and a squiggle of steel. Move over Beatrix Potter, Méret Oppenheim’s fur teacup and saucer just got a barbed 21st-century reboot.

The show takes its title, How to Behave at Home, from a Victorian etiquette manual. In her use of uncomfortable constrictions and queasy combinations of rough and smooth, natural and artificial, Morgan deliberately offers her very particular interpretation of Dr. Freud’s notion of unheimlich, best translated as "creepy" or "uncanny" in English. In an accompanying text Morgan asks: “Is your home a sanctuary or a snake pit?”. After several months of lockdown and with the prospect of more shuttering and restraint to come, it is a question that many of us might struggle to answer.

• Polly Morgan: How to Behave at Home, The Bomb Factory Art Foundation, London, until 2 November