Plus, we fall head over heels for Vezzoli 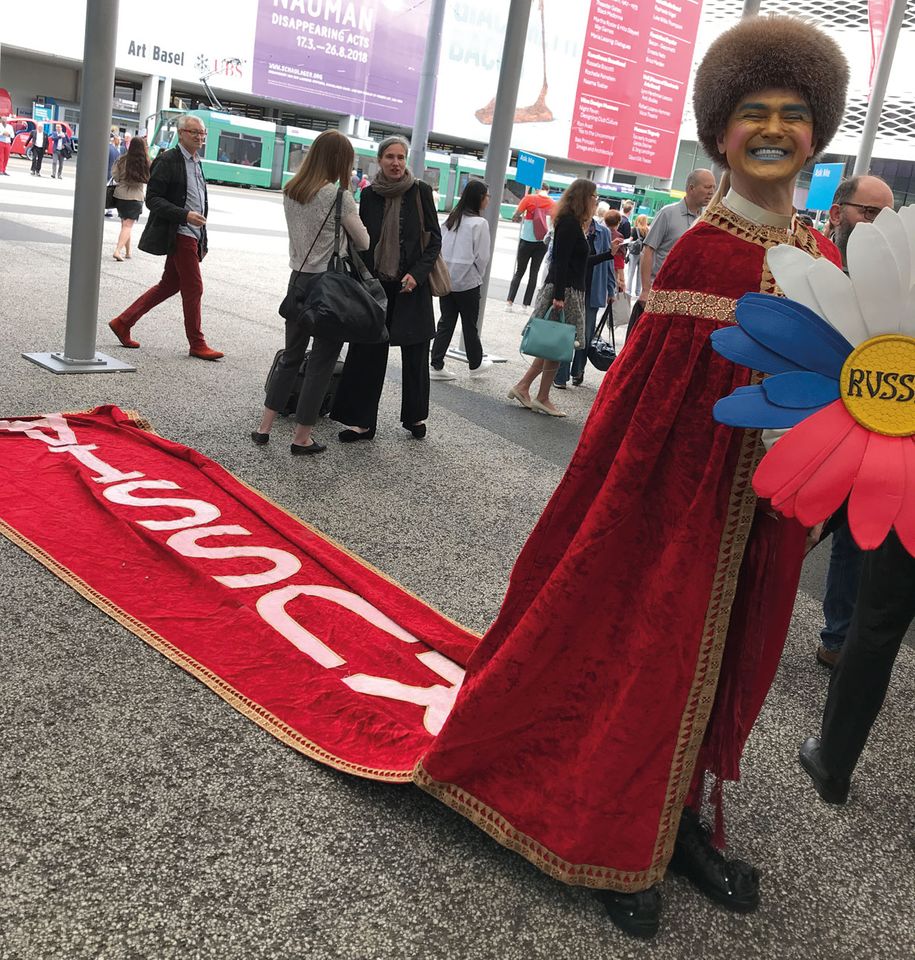 From Russia with a really long cape

The Russian artist Alexandr Donskoy turned up at Art Basel earlier this week determined to make his mark at the fair. The flamboyant figure told us he was on a mission to change people’s (rather poor) preconceptions about his home country, hence his exceedingly long velour coat emblazoned with the words “I want to love Russia”. But all did not go to plan for the provocateur who made waves on the Messeplatz with his blue lipstick and fetching fur hat. Security personnel informed Donskoy that he would have to put his colossal cape in the cloakroom, scuppering his project to make fairgoers passionate about the land of Putin

Where art and science collide 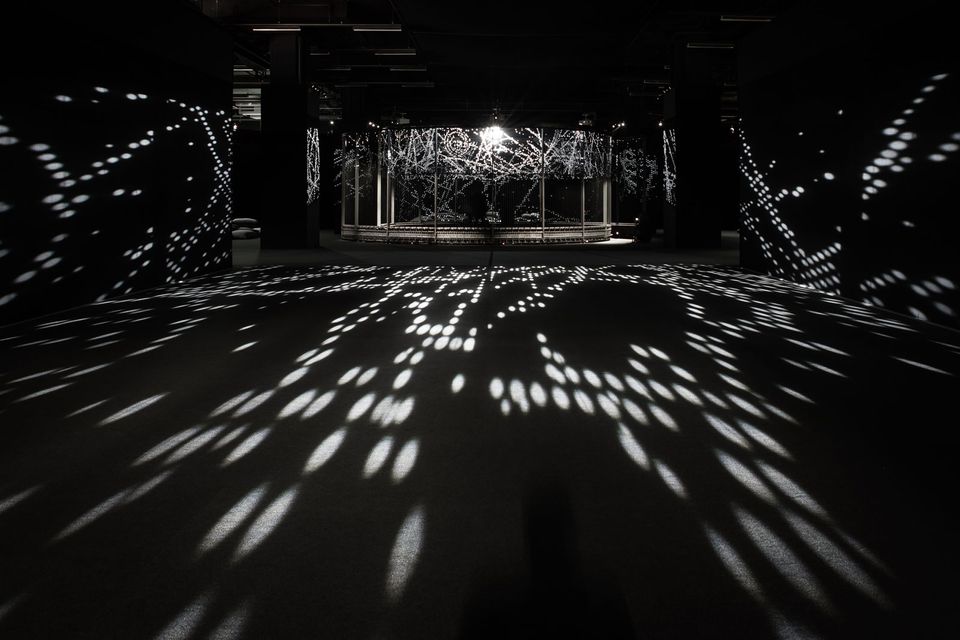 A spectacular new installation combining science and art is wowing visitors at Art Basel. The UK duo Semiconductor, aka Ruth Jarman and Joe Gerhardt, have mined data from the Cern laboratory in Geneva, to create an immersive art piece, Halo, on show in a subterranean hall near the Messeplatz. The work, which depicts slowed-down subatomic particle collisions, is the fourth commission by the Swiss watch manufacturer, Audemars Piguet. “It was specifically crafted with the aim of it being able to travel after Basel. It is set up in 16 modules for easy assembly and disassembly when travelling. Currently, there is a lot of interest from cities around the world to host Halo after Art Basel,” a project spokeswoman says. Will this particle-colliding piece that demystifies quantum physics come to a black hole near you soon?

Head over heels for Vezzoli 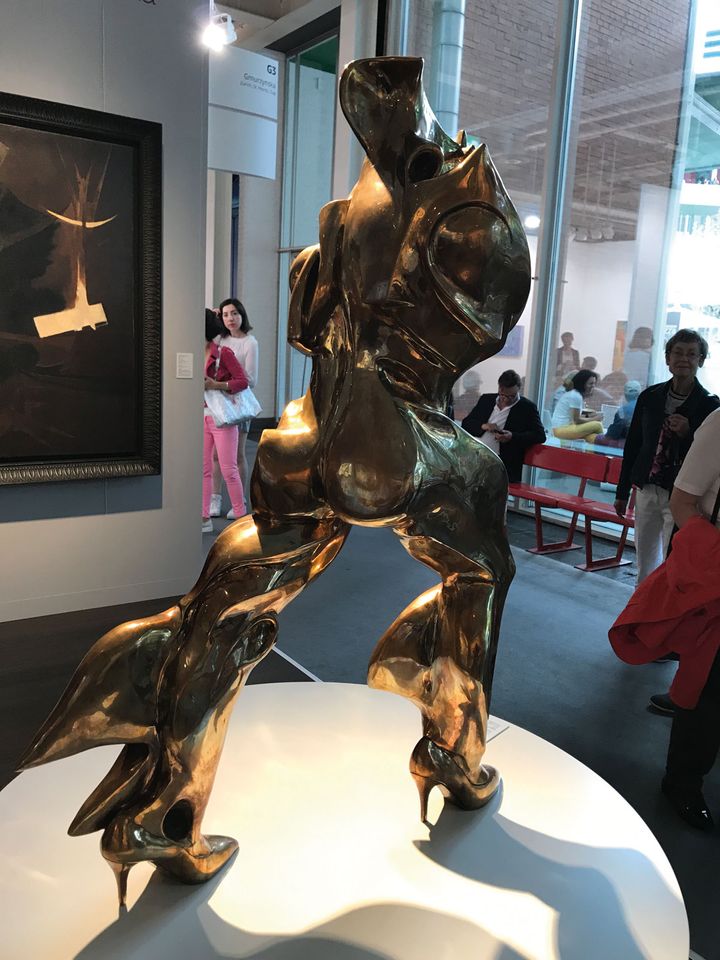 The award for the best take on a famous art historical work at Art Basel goes to the Italian artist Francesco Vezzoli, who has transformed a 1913 Futurist sculpture by giving it… a pair of high heels. When Umberto Boccioni made Unique Forms of Continuity in Space, epitomising the Futurist ethos of speed and motion, he said: “Let us fling open the figure and let it incorporate within itself whatever may surround it.” Vezzoli’s version has rather less panache, striding on the stand of Galerie Gmurzynska like a colossus on stilettos. “I just wanted to bring a touch of camp to one of one of the most famous pillars in the history of Italian sculpture,” he says. 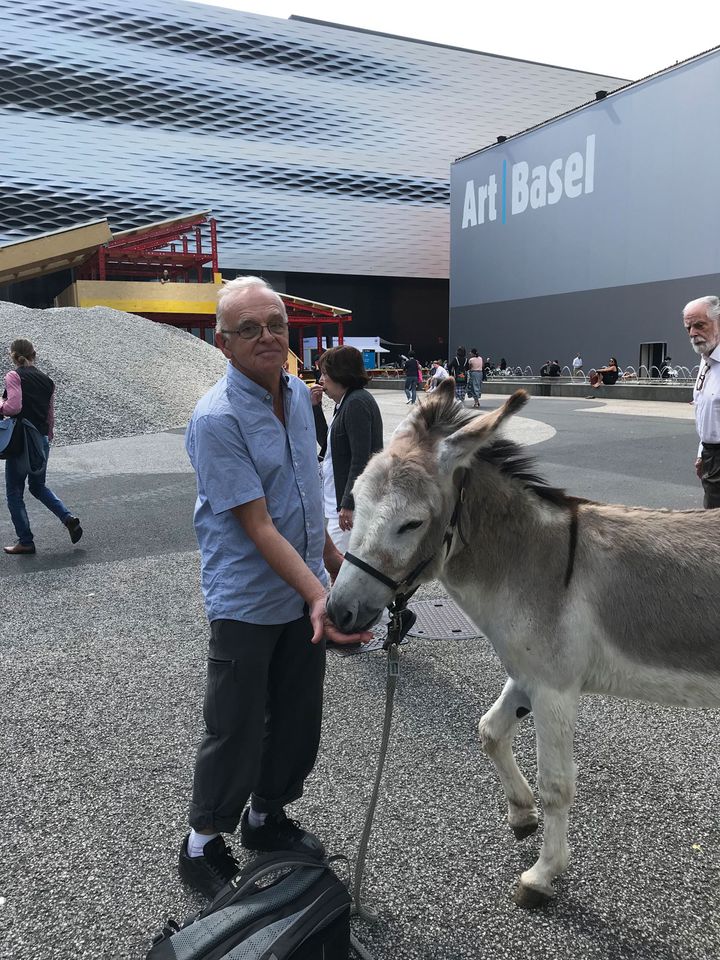 Some people say that the art world is full of asses but one on the Messeplatz made us do a double take. Every year, retired teacher Ernst König and his pet donkey Charlie travel to Basel from Germany for the fair. Has he been to Art Basel yet? “No way, they won’t let us in,” König says. But security seems somewhat more relaxed at the inaugural edition of Frame, where staff entertained the loveable beast while his owner hoofed it around the fair. 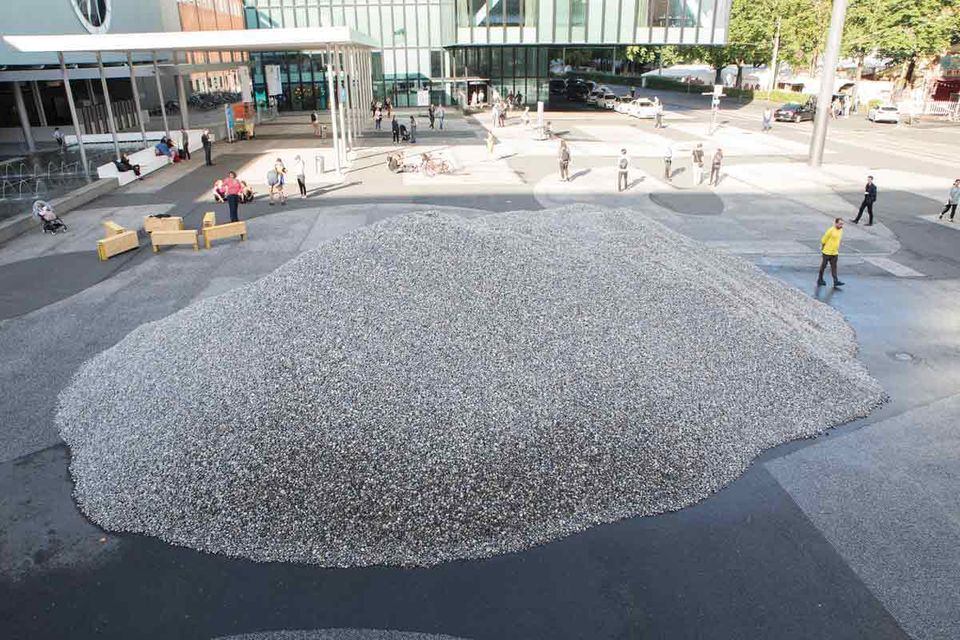 Lara Almarcegui's piece on the Messeplatz

It’s hard to miss the mountain of pebbles piling up on the Messeplatz. The gravel installation, by the Spanish artist Lara Almarcegui is, increasing in size throughout the fair to reflect the amount of material extracted from Basel quarries during this period. Despite the work’s serious subject matter, collectors were seen pocketing the rocks as souvenirs as though they were Félix González-Torres’s sweets. After hours earlier in the week when the mountain was more of a large mound, one cheeky fairgoer spotted an opportunity to show off his athletic prowess by running to the top and performing a bear slide down it worthy The Jungle Book’s Baloo. Another chose to make his decent by the less desirable slide and roll technique. Their excitement at conquering Mont Messeplatz was short-lived when the smartly dressed pair saw the state of their clothing after their expedition.