Our monuments should be radically relabelled or repurposed to better represent who we are today, says former British Museum director Neil MacGregor 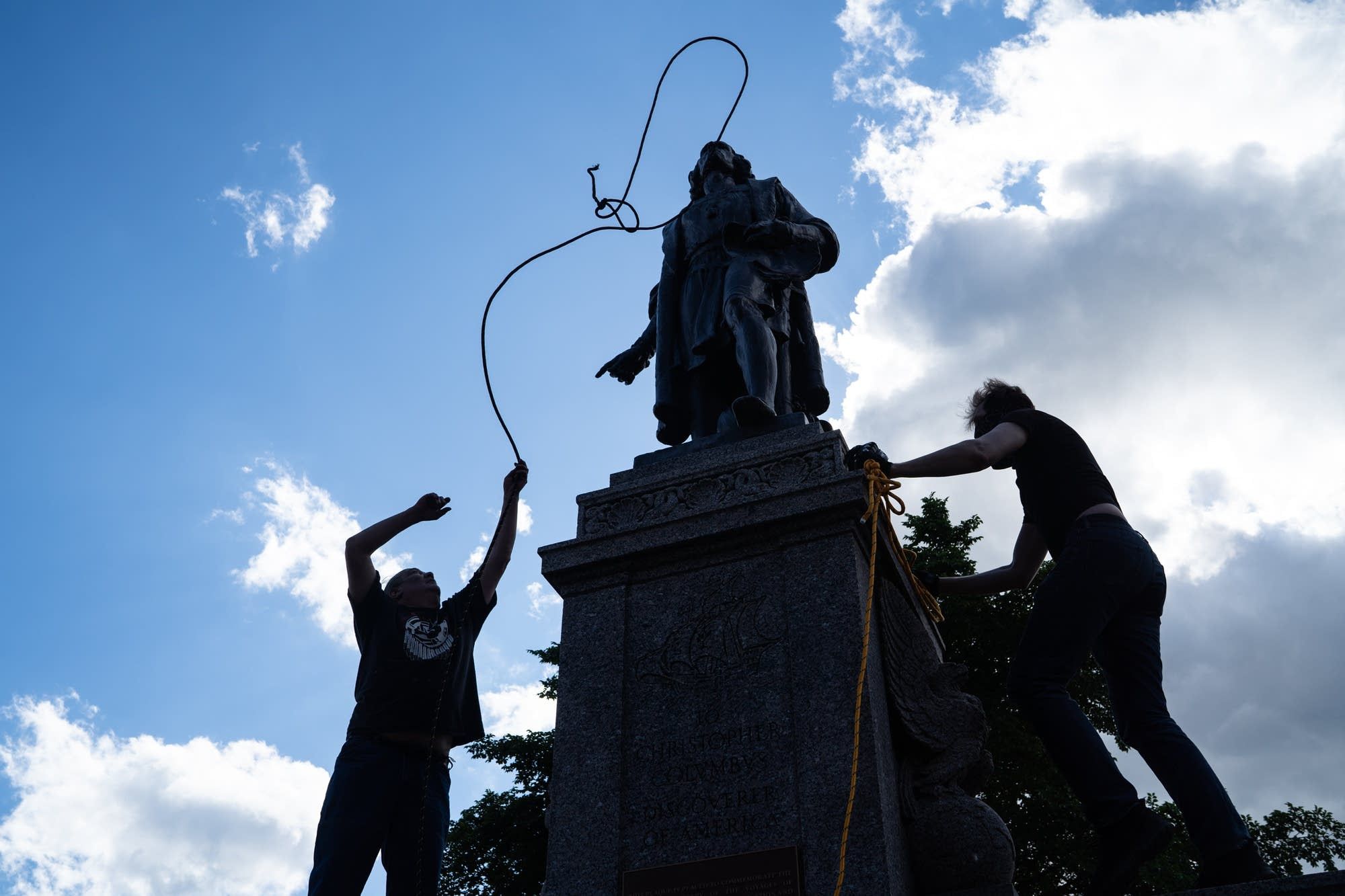 Two men fasten ropes around the neck of a statue of Christopher Columbus at the Minnesota State Capitol in St. Paul on June 10, 2020 Photo: Evan Frost

The summer of 2020 was, pretty well everywhere, a tricky time to be a statue. In the wake of the murder of George Floyd in Minneapolis on 25 May statues all round the world from Greenland to New Zealand that had anything to do with colonial or racial injustices, were defaced, re-labelled, removed, or simply destroyed. It was a wave of global iconoclasm without precedent. And it forced everybody to think again about why we erect statues, and why from time to time we decide to change them. The spectacle of a human figure, humiliated, bound and dragged through the streets before being thrown into Bristol harbour reminded us all of the unique emotional power of a statue—this is, after all, the image of another human being, even if Colston was also a slave trader.

For more than 200 years, we have been writing our history in the public square by erecting likenesses of great figures of the past. At least that is what is often said. But statues usually tell us not so much what the people on the plinths did, as what we, the people who put them there, want our society to become. We honour politicians or inventors, secular saints or successful soldiers to encourage others to follow their example. In statues, we are writing not so much our imagined history as our hoped-for future. As our preoccupations and priorities change, so must our statues.

Iconoclasm is vandalism with a noble purpose—at least that is how the iconoclasts see it. Protestant reformers in 16th-century northern Europe; French and Russian revolutionaries; the Taliban destroying the Bamiyan Buddhas—all of them—were destroying public symbols of past “error” in order to allow society to start again, on what they believed would be a sounder moral basis. By the same token across eastern Europe after 1989, statues of Stalin and Lenin were quickly removed. To borrow a term from Capitalist economics, this sort of statue-toppling is “creative destruction”, the necessary precondition for new and better growth. And that was the rhetoric of the summer of 2020.

Throughout that summer, media attention inevitably focussed on Colston’s dunking, or Confederate generals being removed from their plinths across the American South. Further north in the US, however, much of the hostile action focussed not on monuments connected to slavery or the civil war, but on the ubiquitous statues of Columbus. Why?

The idea of making the Genoese adventurer into a US national hero had emerged, and been vigorously promoted, in the 1880s and 1890s. The main purpose was to raise the status of Italian Americans, disdained by the WASP (White Anglo-Saxon Protestant) establishment, and victims of sustained discrimination. The nation was exhorted to honour the man—the Italian man—who had opened a world of opportunity and freedom for the downtrodden of Europe. But by the late-20th century, the figure who once seemed to unite the national community had become divisive. The nation was now much more than European immigrants in search of life, liberty and happiness: its understanding of itself had come to embrace the very different perspectives of both African Americans and Native Americans. For the latter especially, Columbus represented neither opportunity nor freedom: he was merely the first European to oppress them, the initiator of their dispossession and decimation.

Supporters of this view had been arguing for years that the unqualified celebration of Columbus in the public domain was no longer acceptable. Their campaign had had some limited success.   But in 2020 it took off. In the space of just one week (9-16 June) statues of Columbus were toppled or officially removed in Boston (Massachusetts); Richmond (Virginia); St Paul (Minnesota); Houston (Texas); Wilmington (Delaware); Detroit (Michigan); both Hartford and New Haven (Connecticut); St Louis (Missouri) and Sacramento (California). The following weeks saw the pattern repeated in yet more cities across the whole of the US.

Each of these assaults on Columbus had of course its own local dynamic, but behind them all lay one central question: can you, in the US as it now imagines itself, celebrate the coming of the Europeans to America without also acknowledging—and somehow showing—the tragic consequences for its inhabitants?

Colston was honoured in Victorian Bristol, England, not as a successful slave trader, but as a role model to inspire rich citizens to endow good causes in the city as he had done, wherever their wealth came from. But the Bristol of 2020 was equally concerned with the enduring injustices and inequalities of slavery, still acutely present today. Where in the statue was the other side of the story? Attempts to have it written on the plinth had come to nothing. How do you deal with monuments that are now seen to address and celebrate only one side of a painful shared history? Do you need two statues, or none? Or is there another way forward?

When it comes uncomfortable histories, it is usually worth looking at what the Germans have done. Their starting point is always the need to remember what went wrong in order to avoid repeating the mistakes. A key way to encourage remembering is to keep the mistake visible—radically relabelling or repurposing monuments rather than destroying them. So the huge memorial in Bremen to the soldiers who died conquering and defending South West Africa (Namibia) around 1900 has now become a monument dedicated to the victims of that outstandingly brutal colonial war—with inscriptions composed in consultation with Namibian colleagues. The monument of triumph has been turned into a symbol of atonement and reconciliation.

Some statues, however, cannot easily be given a new meaning, and are too poisonous—too dangerous—to be left in place. In the museum in the Citadel of Spandau on the outskirts of Berlin are gathered monuments of the different strands of German 20th-century history that led to catastrophe for Germany and Europe. All were once on show in Berlin, admired and revered. There are pre-1914 celebrations of militarism; Nazi images of Aryan physical perfection; symbols of Soviet dictatorship. It is a supremely disturbing place. The statues are shown damaged by war or by outraged citizens, without any aura of authority; giants that have been slain after millions had suffered. They show us what Germany is now, by presenting what Germany has vowed never to be again. And rather than simply condemning the past, they ask the most uncomfortable of all questions: how could so many people like us once have thought that this was the way to run a society? And where are our moral blind spots today?

It is perhaps a model that other countries could consider in their discussions about their public monuments—and perhaps an additional role for our civic museums. It is one way of building the juster society that we all want.

• Neil MacGregor is the former Director of the British Museum, and a Founding Director of the Humboldt Forum in Berlin. He is a contributor to Sky Arts Statues Redressed, broadcast this autumn