'Museum directors have lost panache and grit': 30 years on, the legacy of the Corcoran's Robert Mapplethorpe cancellation

New exhibition at the George Washington University looks back the censorship of the photographer's work—but what impact did it have on the art world? 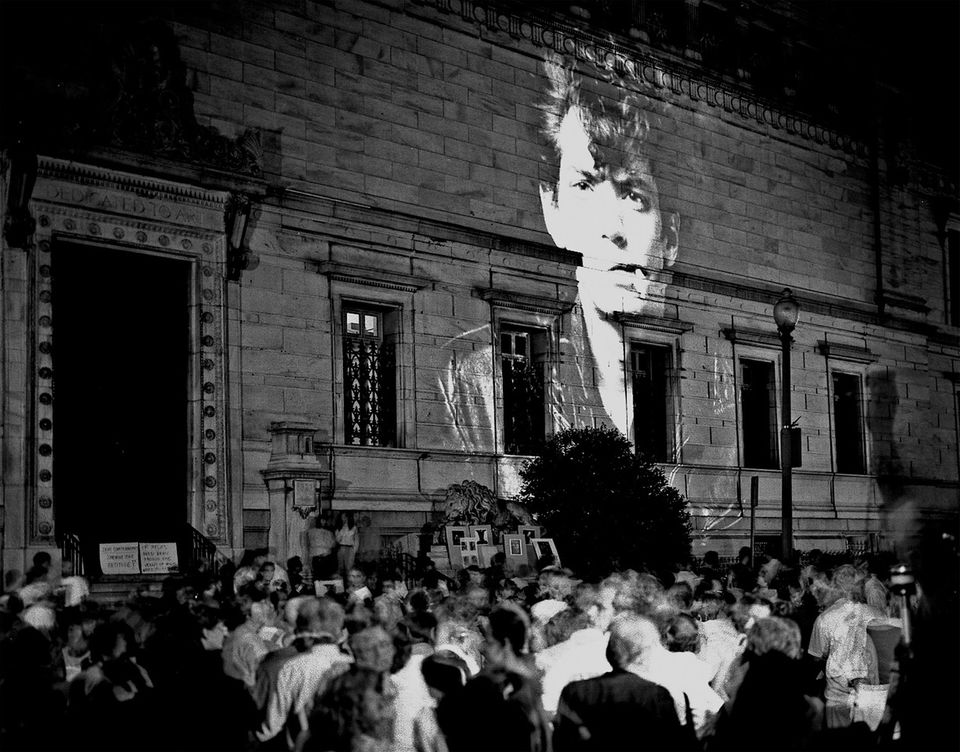 A protest at the cancellation of the exhibition Robert Mapplethorpe: the Perfect Moment, on 30June 1989, in Washington, DC © Frank Herrera

On 1 July 1989, the now-defunct Corcoran Gallery of Art in Washington, DC was slated to open The Perfect Moment, a retrospective of the work of the photographer Robert Mapplethorpe. On 12 June, the director of the museum, Tina Orr-Cahall, canceled the show after complaints from the American Family Council, Senator Jesse Helms, and others. The show's male nudes, sadomasochist scenes, and nudes of small children, they said, were obscene.

A new show at the Corcoran's art school, part of the George Washington University, 6.13.89: the Cancelling of the Mapplethorpe Exhibition (until 6 October), opened on 13 June—the 30th anniversary of museum's fateful announcement that it would call off its run of the show. It is a well-done archival treatment and—good for them—they opened it with a party. There is nothing wrong with substituting martinis and camaraderie for spilt milk and tears.

I have to say that even after 30 years, the Corcoran's leadership at that time still looks bad. The Perfect Moment became a perfect storm. The cancellation provoked a furor over censorship, obscenity, homophobia and the National Endowment for the Arts (NEA), which partially funded the show. After the show went to the Cincinnati Contemporary Arts Center in 1990, its director was criminally charged with obscenity, the only time a museum director was charged with a crime for the art he showed. Though he was acquitted, the trial was a national circus.

"Thirty years later, what is the take-away from this revelatory and deeply troubling art world mess?"

I saw The Perfect Moment at the Wadsworth Atheneum Museum of Art in Hartford, Connecticut, in late-1989. Thirty years later, what is the take-away from this revelatory and deeply troubling art world mess?

First, the world has changed. I was in New York last week. It is the middle of Gay Pride Month. Not since the rain stopped pouring on a waterlogged Noah have rainbows been so ubiquitous, in every shop window, on every street. Gay marriage is legal in the US. There has been a cultural revolution.

The Corcoran? The Corcoran was the most incompetently run museum in the country. It made many bad decisions on so many levels, from money management to building expansion and, yes, the Mapplethorpe cancellation. That is why the museum went out of business—bad judgment was in its DNA. When Orr-Cahall canceled the show, the trustees stood behind her. They might have pushed her into doing it. Then, as trustees often do, they hid. Then they micromanaged. Then they apologised and abandoned her. 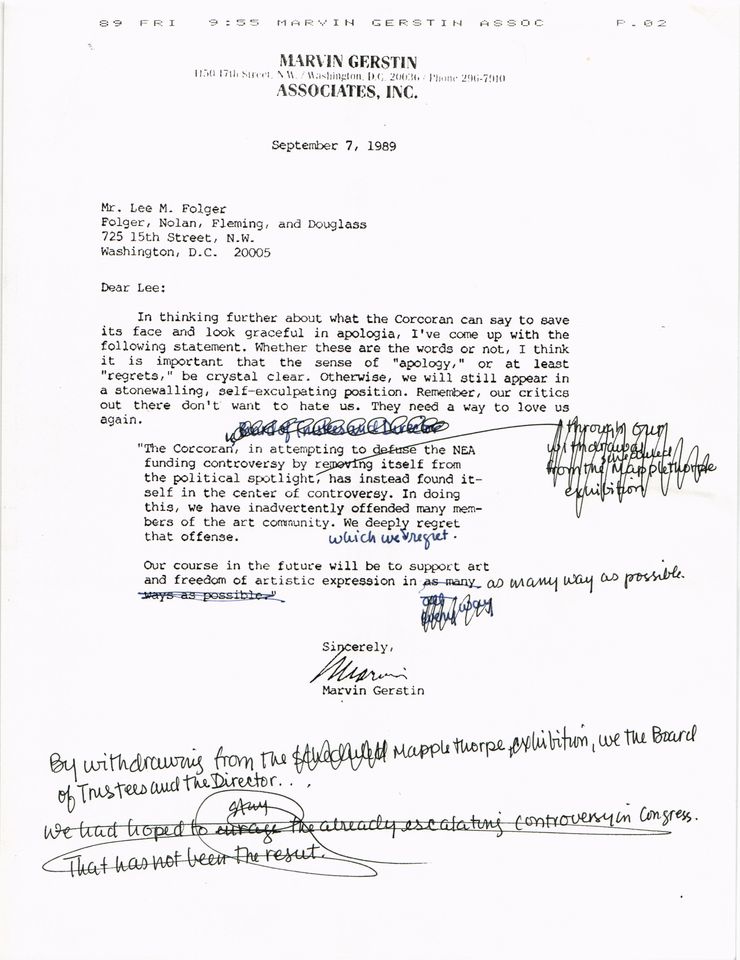 The Perfect Moment had already run in Philadelphia at the Institute of Contemporary Art (ICA) and the Museum of Contemporary Art in Chicago without any hubbub. Days after the Corcoran canceled the show, the Washington Project for the Arts picked it up and it ran there with no protests. Had it opened at the Corcoran as planned, it would have been a hit with critics and the public. Helms crying "obscenity" would have guaranteed curious crowds.

At the time the Corcoran said, and I believe them, that they did not want to make the NEA a big target since it funded the show. The Corcoran really had no dog in that fight—the NEA was already under fire, for many reasons. And the Corcoran didn't get the grant, the ICA in Philadelphia did and they were the ones who organised the show. The $30,000 NEA grant supported the catalogue.

The Corcoran was never going to assuage the people who thought the show was obscene. Rather, it betrayed its own natural allies of libertarians, critics, artists and art lovers. There was a conspicuous lack of courage. My general disposition, in a flight or fight situation, is to fight.

This brings us to the NEA. I got my MA and PhD in art history using what I still think is a unique glide path. I was in political life for years before I went back to school and I got out while the gettin' was good. Now I work with a far better class of people. 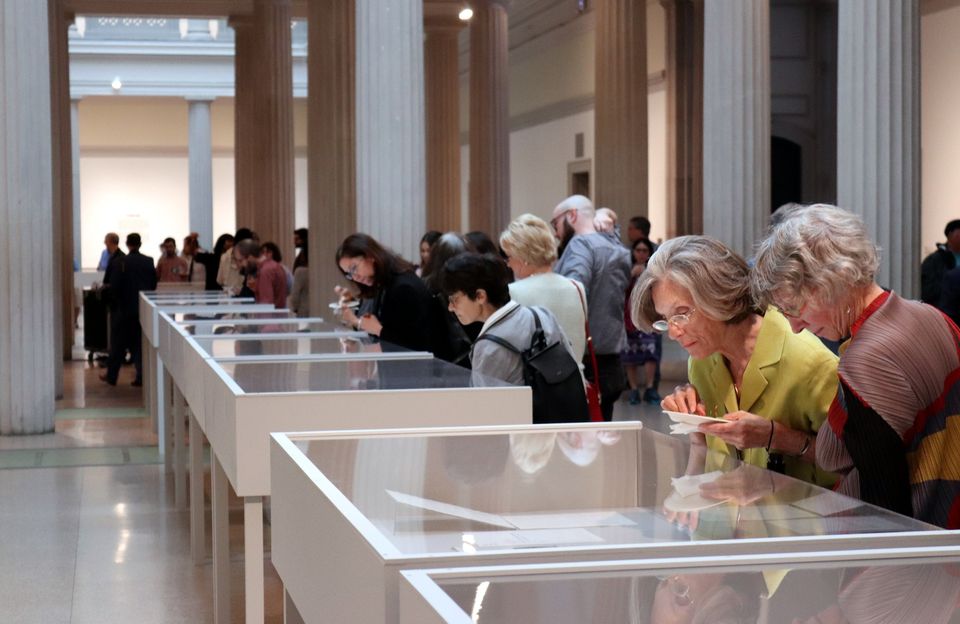 The opening of 6.13.89: the Cancelling of the Mapplethorpe Exhibition at the George Washington University’s Corcoran School of the Arts and Design Photo: Elvert Barnes

That said, I found naive the "how dare you" attitude from people aghast at the questions Helms's crowd raised over what the NEA did with its money. It is very simple: if you take money from the government, then the government is going to try, sooner or later, to tell you what to do with it. It will either be politicians or bureaucrats, but the temptation to meddle is irresistible.

In The Perfect Moment, many of the photographs from Mapplethorpe's late-1970s X Portfolio—sadomasochist themes posed by models he had met at the Mineshaft bar in New York—were in the show, though they were not illustrated in the catalogue. I doubt a newspaper in the US would run most of them or, for that matter, most of the straightforward nudes. Facebook also censors nudity today.

In my opinion, Mapplethorpe was a good but by no means great artist. In his portraits and still lifes, everything and everybody looks embalmed. They are cool, detached and clinical, which makes them less beautiful than creepy. When Mapplethorpe used that look for the X Portfolio, the men evoke a posed, closely studied gruesomeness. The Mineshaft world was not my cup of tea—it is kink whose gas is humiliation, abuse and subordination. Still, the X Portfolio, after 40 years, is unique and riveting. It is Mapplethorpe's best work.

In canceling the show, the Corcoran unwittingly sabotaged its colleague museums taking the show down the road, especially in conservative Cincinnati. Though one of the first museums in the country dedicated to living artists, the Cincinnati Contemporary Arts Center (CAC) was small and financially vulnerable. It was not a much loved civic icon like the nearby Taft Museum or the Cincinnati Art Museum. Family values groups had a base there. Mass media was cheap and plentiful. There, The Perfect Moment became a sitting duck.

The ICA probably has a file from 1989 filled with rejection letters from museums whose exhibition committees felt the Mapplethorpe show was too controversial, though they might not have said it. Is that censorship? No, it's timidity. But Donald Barrie, the museum director who took on the show, was charged with crimes for which he could have gone to prison. That is more than a prosecutor's abuse of power—that is real censorship. Canceling a show that already has four other venues and a book for sale nationally is bad judgment. 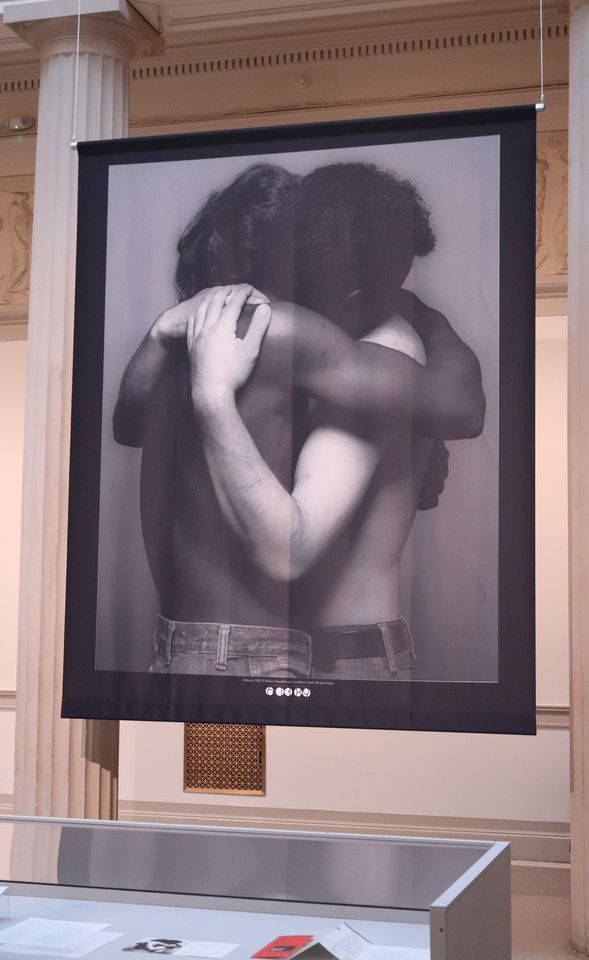 An installation view of 6.13.89: the Cancelling of the Mapplethorpe the Corcoran School of the Arts and Design Photo: Elvert Barnes

Barrie was charged with violating state laws against obscenity and child pornography. Two of the seven photographs at the heart of the charges were nudes of children. The others were from the X Portfolio, among them a photograph of a man urinating in another man's mouth and the famous bullwhip self-portrait. Barrie was arrested the day the show opened, cameras rolling as he did the perp walk.

The Cincinnati trial transcript is worth reading. I read it at about the same time I read what remains of the transcript for the Whistler v. Ruskin libel trial in 1878. Then, J.A.M. Whistler sued the critic John Ruskin, who wrote of a Whistler painting that he had "never expected to hear a coxcomb ask two hundred guineas for flinging a pot of paint in the public's face". The transcript there showed a jury of middle class men, none art lettered, much less art savvy, grappling with questions like "what is art" and "who judges value".

The Cincinnati jury—eight middle class people, most from Cincinnati's exurbs and none regular museum goers—acquitted Barrie. The prosecution made two fatal errors. It blocked the jury from seeing the entire 175 object show, of which only seven photographs were claimed to be unlawfully displayed. The jury saw those photographs alone. Second, its expert witnesses alleging the photographs would be psychologically harmful to children or endanger children were unconvincing. One claimed the show would create a new class of perverted photographers.

Jurors later said they resented the prosecution's decision to bar them from putting the seven contested objects in context with other things in the show. They did not think that the government should have the power to block what art the public could see. "What is art" is best left to the experts at the museums and to the public. If an object was indeed art, it couldn't be considered obscene. Art has an infinite license.

"Museum directors grew terrified of ideas that might become controversial. Today, they don't know how to ride out storms. They have lost the panache and the grit."

Years earlier, the Whistler v. Ruskin jurors felt the marketplace determined not only what was art but what it was worth. Ruskin might have libelled Whistler but, worse, he libelled the marketplace. Parents of the children photographed by Mapplethorpe said they thought the works were charming, which they are not. They are not obscene, but I think they are invasive and opportunistic.

The Perfect Moment trial might have had a good verdict but the fuss over the show had immense consequences. The NEA, once willing to fund experimental shows, withdrew from risk-taking. Thirty years later, it supports mostly white bread culture, giving lots of innocuous grants spread across hundreds of Congressional districts. Corporate giving to museums collapsed. Museum directors grew terrified of ideas that might become controversial. Today, they do not know how to ride out storms. They have lost the panache and the grit.

In Cincinnati, Barrie was fired after the trial. Today, his steadiness under fire, eloquence, curiosity and commitment to principle look both very good and very rare, which makes him heroic. Between the Corcoran and Cincinnati, The Perfect Moment becomes the perfect learning opportunity.

about 12 hours ago
The cancelling of the Genoese art loan show Superb Baroque is a sad day for the National Gallery in Washington, DC