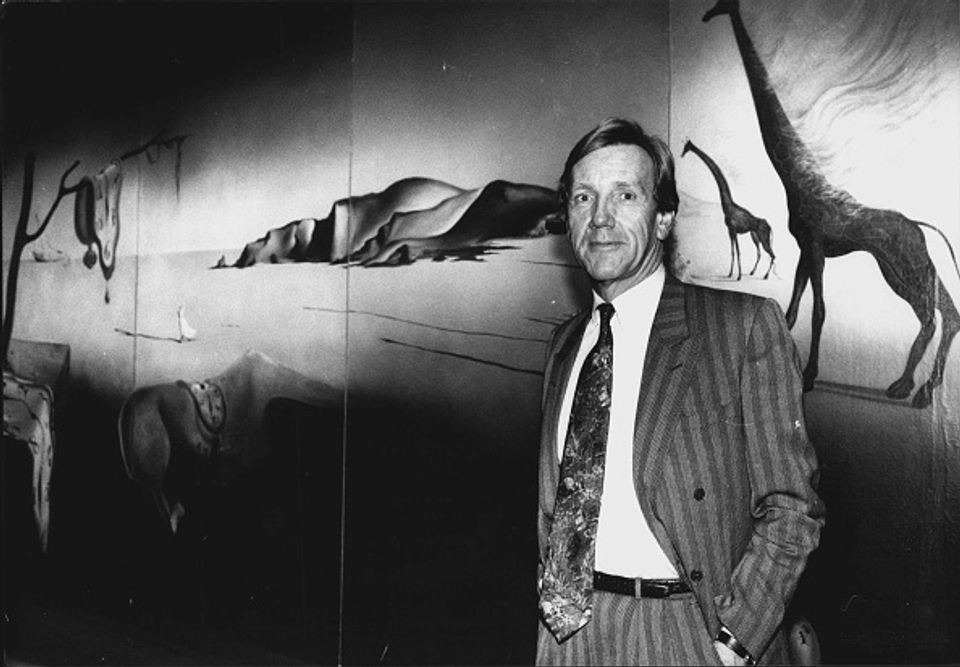 Death was certainly not in Edmund Capon’s plans when he retired as the longest-serving director of the Art Gallery of New South Wales at the end of 2011. For the following six years he kept up a busy schedule of public speaking, leading tours, and being generally open to all possibilities.

When we met for lunch in July last year he told me he thought he had beaten the melanoma that had threatened his social schedule. He was back to his irrepressible best, full of gossip and plans for the future. He was also vitally interested in the institution he had led for 33 years, eager to discuss the expansion proposals, the problems and opportunities.

Edmund arrived in Sydney from London in 1978, having previously been a keeper in the Far Eastern Section of the Victoria and Albert Museum. He was a China specialist who had studied at London University’s School of Oriental and African Studies, and at the Courtauld Institute. His father ran a paper mill and voted Tory, but Edmund was a rebel. He dabbled as an artist and was briefly a member of the Communist Party. He had caused a great scandal in his romance with Joanna, who was married to a peer of the realm. When the dust settled the pair formalised their union in 1977, and remained together to the end.

From the beginning of his tenure as director of the Art Gallery of New South Wales (AGNSW), Capon set out to shake up a moribund institution. He abolished entry fees, established a lively exhibition programme, and expanded acquisitions in areas such as Asian and Indigenous art.

He also acquired key works by old and Modern masters through a mixture of purchase and private donation.

He will always be known for the Entombed Warriors exhibition of 1982 which assembled figures from the tomb of China's first emperor and brought in a record 800,000 visitors, but there were plenty of other successful blockbusters along the way. He presided over the annual circus of the Archibald Prize for portraiture with the practised skill of a ringmaster, draining every drop of publicity from this popular event.

Capon’s outspoken, flamboyant style was a perfect fit for Sydney, a city famously indifferent to anywhere else in Australia—or the world. He was always available for an interview or a statement. He spent an enormous amount of time at the gallery, both after-hours and on weekends. A fierce dislike of snobbery put him on first-name terms with almost every staff member.

When problems arose Capon would sail through with a calculated haughtiness that invariably defused criticism. He had a wily streak, and there were often reasons to question or disagree with his actions, but at no stage did he allow any dispute to impinge on his professionalism. No matter how exasperating, he had the knack of bouncing back from every blow. Capon made enemies easily but brushed them aside with casual disdain. Those who knew him well saw a generous and compassionate person behind the provocative exterior. He clung gamely to his scholarly aspirations and took every opportunity to involve himself in the gallery’s public programmes. In 2009 he would publish a book of essays and lectures titled I Blame Duchamp.

Capon often resembled one of those well-worn characters from English drama: the loveable rogue, but he brought his own special flair to the role. His bluff charm made him adept at extracting funds from private donors and government ministers. He presided over a major expansion of the Asian galleries in 2003.

When he finally surrendered his role as the AGNSW’s Great Helmsman it became clear what a powerhouse Capon had been. He left a legacy of sustained achievement that no Australian gallery director can match. A larger-than-life character who led from the front, he gained the affection and esteem of his staff, the media and the public. It was hard to imagine the AGNSW without Edmund, and it is just as hard to imagine the planet in the same condition.

Edmund George Capon died in London on 13 March. He is survived by his wife, Joanna, and by two children, Tara and Dominic, from a first marriage, as well as Joanna’s three children, Iona, James and Rebecca.