Hope springs eternal. That is the message repeatedly, although infrequently, revived by stories that some long-lost object may be on the verge of resurfacing. So it is with the recent news out of Italy that the Carabinieri believe that Caravaggio’s Nativity, stolen from Palermo in 1969 and believed to have been destroyed, may not only be intact, but they may be hot on its trail, in Switzerland.

On 18 October 1969, thieves linked to the Sicilian mafia, slipped into the oratory of San Lorenzo in Palermo. In a classic stealth theft, they waded through the darkness to Caravaggio’s huge Nativity with Saints Francis and Lawrence, which hung above the altar. The next morning, worshippers discovered the canvas had been sliced from its frame. The Italian government was so incensed by this crime, which took place in the midst of an anti-mafia crusade, that it prompted the establishment of the world’s first dedicated art police force, a branch of the Carabinieri called the Tutela Patrimonio Culturale (TPC) – the Division for the Protection of Cultural Heritage. The TPC is now the most effective art crime squad in the world, and the largest, with over 300 full-time agents. It maintains a database, nicknamed Leonardo, that contains information on more than four million stolen artworks, most of which are still missing. Unfortunately, the Palermo Nativity remains among them.

In 1979, the investigative journalist Peter Watson agreed to go undercover for the Carabinieri, posing as an art collector keen on stolen art, in the hope of being offered the Caravaggio. He was convinced it was in the possession of the mafia contacts he made, but he never saw it—although he was offered a stolen work by Bronzino and a painting by Andrea del Sarto, which were recovered thanks to his intervention. 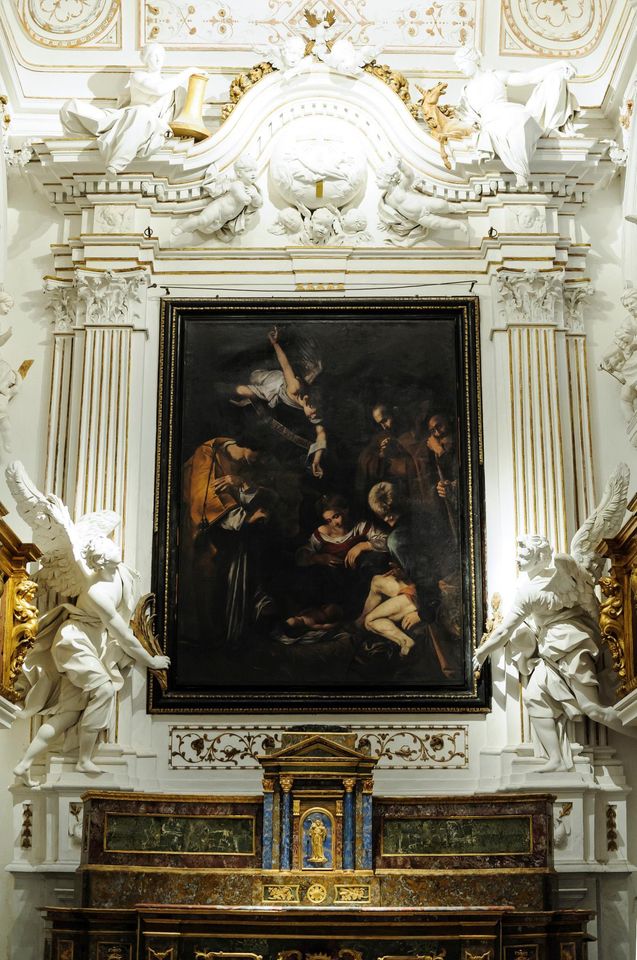 A reproduction of Caravaggio's Nativity with Saints Francis and Lawrence, made by Factum Arte, now hangs in the oratory of San Lorenzo in Palermo Factum Arte

The painting was not sold on, as far as anyone is aware—at least not at first. Rumours circulated about its possible whereabouts, fuelled by the court testimony of mafia informers. Some thought it had been stolen for blackmail, others to decorate the wall of a mafia boss. The latter suspicion grew more probable when a pair of van Gogh paintings, View of the Sea at Scheveningen and Congregation Leaving the Reformed Church in Nuenen, stolen from Amsterdam’s Van Gogh Museum on 7 December 2002, were found in September 2016 on the walls of the holiday home of a member of the Camorra, the Campanian mafia. Still, the fate of the Caravaggio remains unknown. In 1996, a member of the Sicilian mafia asserted that he had stolen the work for a high-ranking boss, and in 2009 a mafia informant claimed to have been told a decade before that it had been damaged during an earthquake while in storage in Sicily, and had subsequently been eaten by rats and pigs at the farm where it was kept.

Caravaggio’s Nativity is of great importance to both the history of art and the history of art crime. Its theft prompted the establishment of the first police unit dedicated to art and changed the way authorities approached the matter of stolen art. Nevertheless, it would take several decades, and the travesty of terrorist groups profiting from plundered art and antiquities—like the Islamic fundamentalist group Isis, which has destroyed a number of archaeological sites in Iraq and Syria since 2015—before art crime would be taken seriously by the public and by governments. The Nativity’s loss also means one fewer extant Caravaggio among the very small group of works created during the artist’s brief lifetime (he died at the age of 40). Caravaggio only painted four works while he was in Sicily, hoping for a papal pardon after having murdered Ranuccio Tomassoni, ostensibly over a lost game of tennis but actually in a sordid row over their mutual love interest, in which the artist attempted to castrate his rival.

Do only three now remain? If the earlier mafia turncoat was misinformed—or actively misinforming—then hope remains that the Nativity is still intact. The idea that the painting was discarded after having been damaged never wrung true—it suggests colossal barbarism on the part of those in possession of it, to not realise its value, even damaged, nor the incredible ability of conservators these days to essentially bring objects considered irrevocably ruined back to life. The more recent news sounds much more likely, and is a welcome ray of hope.

Another mafia informant, Gaetano Grado, claims that the one-time capo di tutti capi of Cosa Nostra, Gaetano Badalamenti, received the painting from another boss. Badalamenti was allegedly interested in selling the work—almost an impossibility in the world of real-life art crime, since it would be unimaginable for any potential buyer who was not already a criminal to be unaware that this work was “hot”—and was in touch with a dealer in Switzerland who might have quietly shopped it around for him. But Badalamenti was arrested in 1984 in the US, and died there in 2004.

The current head of Italy’s anti-mafia unit, Rosy Bindi, has announced that she has “collected enough evidence to launch a new investigation,” suggesting that the painting may still be in Switzerland. There’s many a slip between cup and lip, but once more hope springs that a work thought lost may be within reach once more, or at the very least was not obliterated… or in this case, digested.