I would walked past it hundreds of times, always wondering what was inside, but never knowing how to find out. At the end of a long, postcard-perfect cobbled street in the center of my adopted hometown of Kamnik, Slovenia, there is a 19th-century townhouse owned by the Sadnikar family. Inside it is one man’s extremely personal art collection. This much I knew, as many Kamnik residents recalled having visited the collection while students. A quick glance in the window (trying not to look too suspicious while doing so), I could see some intriguing objects on display. But this, I knew, was a private family home, and so to see it, one had to be invited by a family member.

So I was delighted when Josip Marko Sadnikar wrote to me and invited me for a visit. His family collection turned out to be a wondrous treasure trove, gathered primarily by his grandfather Josip Nikolaj Sadnikar, which was first shown to the public in 1893. A veterinarian and friend of the Modernist-era Slovenian architect Joze Plecnik, Sadnikar was often paid for veterinary services in antiques, when families did not have cash. 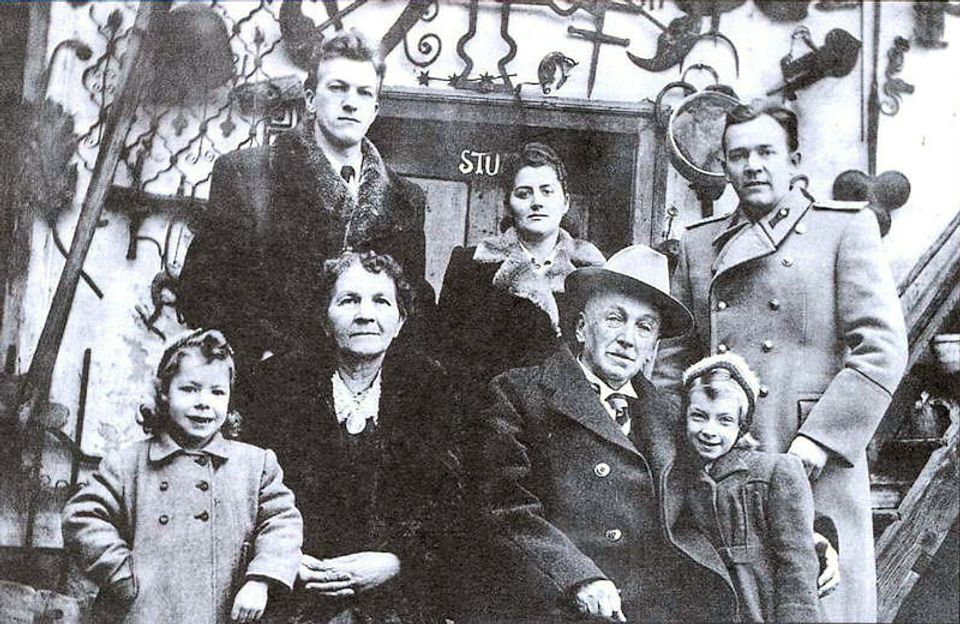 The Sadnikar family in 1948, with Josip Nikolaj Sadnikar in hat

What surprised me is that this is truly a world-class personal collection and is larger than I expected—displayed in a corridor and two generous rooms, there are hundreds of objects, ranging from arms and armour to painting, statues and coins, religious objects and instruments of torture, drawings and furniture. It is eclectic and displayed in a Victorian style—crowded glass cases and tabletops, pictures covering all the available wall space. There is a beautiful Portrait of an Old Man by one of Slovenia’s best artists, Ivana Kobilica, a number of works by Slovenian Impressionists (several of which were loaned to a major exhibition in Paris), and even a small painting thought to be by Tintoretto.

If, in an unmarked and rather random home in a lovely but easily overlooked town at the foot of Alps, there sits a marvelous, museum-quality art collection that even I, as an art historian and resident of the town, have walked past for years and never seen, then what other hidden, almost invisible treasure troves, I wonder, lurk behind unprepossessing doors the world over? 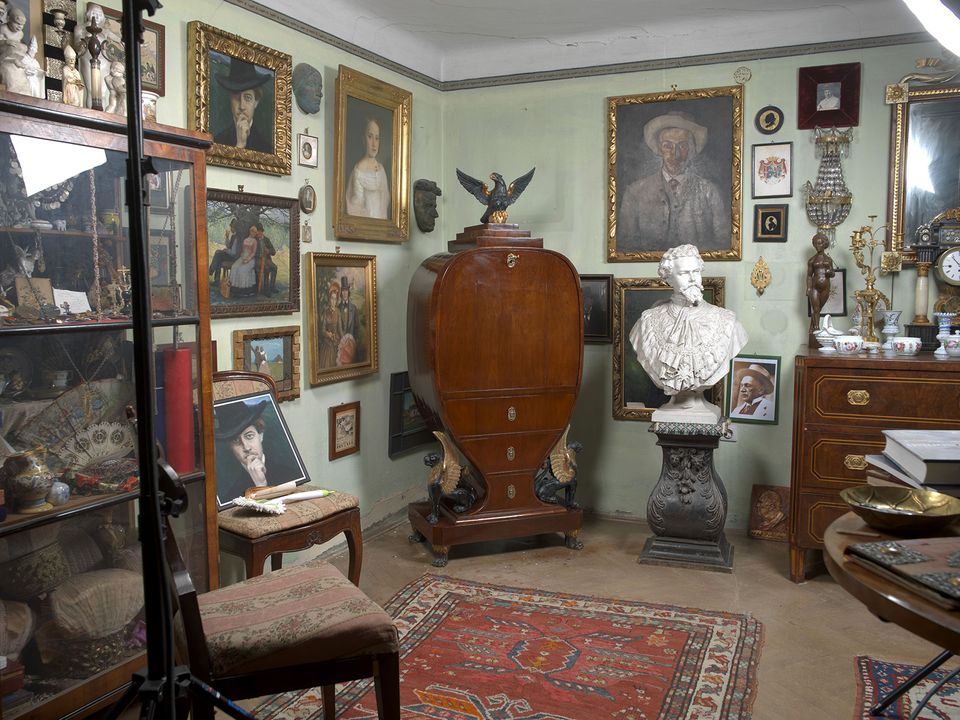 Inside the Sadnikar Collection in Kamnik, Slovenia Josip Marko Sadnikar

This raises a larger issue, one which is linked to my newest book, The Museum of Lost Art. The Sadnikar collection might be considered a nearly invisible collection. Tourists do not know about it, and really should—it is one of Slovenia’s art highlights. Locals have heard of it, but if they have visited, it was likely as students long ago, and most do not realise that they could visit it more often and easily. Hundreds of people walk past it every day, and do not realize what a treasure-house they are ignoring. It is particularly valuable because it was not dissolved, but thankfully remains intact. Another Kamnik art collection, belonging to a man named Stanislav Holzer and which I’m told was of a similar size and quality to the Sadnikar collection, is no longer available, as the objects were distributed to extended family members or sold. Such was the fate of many a great collection on a much larger scale than those housed in Kamnik. 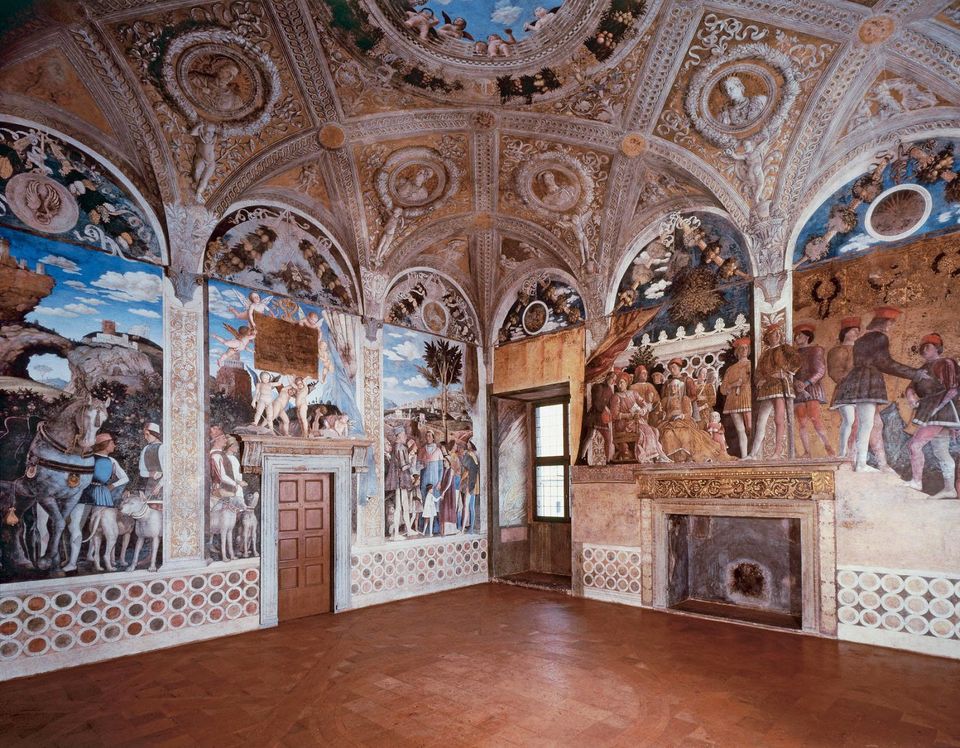 Andrea Mantegna's murals of the Gonzaga family in the Palazzo Ducale, Mantua

Consider the princely collections of so many of the old Italian city-states. That of the Doria family in Genoa, of the Este family in Ferrara, of the Gonzaga family in Mantua. Each one was full of works that now stud the biggest national galleries of the world. The Gonzaga family sold a large chunk of their collection in 1625 to Charles I of England, negotiated by the Flemish dealer, Daniel Nys. Their riches include The Wedding Feast by Breughel, The Butcher’s Shop by Carracci, nine works by Correggio, fifteen by Mantegna, and ten by Rubens. This turned into a blessing, as Mantua was sacked in 1630, and the works that remained were looted. The collection of Charles I was subsequently sold off after his execution, to become another now invisible collection.

The art of the Duc d’Orleans, including around 500 works, was sold in 1792, the first major public auction of an aristocratic collection (not following an execution); 147 paintings were sold to British dealer Thomas Moore Slade, while 123 were bought by Queen Christina of Sweden. These complimented her already impressive collection, which largely consisted of booty her troops brought back from fighting in the Thirty Years’ War, so that the Swedish royal collection contained severed segments of other royal collections, including Rudolf II’s of Prague. Collections were often gathered in this way from sold or looted parts of other princely holdings. We have a bit of good fortune to thank for the fact that the Medici family collection has remained almost entirely intact. No foreign forces managed to definitively pillage Florence, and one of the last of the Medici, Anna Maria Luisa, bequeathed the family’s entire collection to the State of Tuscany in 1737. The Medici trove’s masterpieces are barely contained today in the Uffizi, the Palazzo Pitti, the Palazzo Vecchio and beyond, so just imagine those other ducal collections before their dissemination.

Each collection is a sort of negative space portrait of the individual—in Slovenia’s case of Josip Nikolaj Sadnikar—or of the family or dynasty that gathered it. When the collections are dispersed, the art remains extant, but the story told by the collection dissipate. It is rather like an archaeological site—objects found within, undisturbed, tell a story based on their context. The same objects can tell their own, individual stories, but the tale of how they were gathered and arranged together can be lost if they are viewed outside of the find site, in museum vitrines. For this reason, scholars endeavour to reconstruct virtual lost museums, even if just in terms of lists of works once within them, because doing so helps fill out the historical portrait of the owners, be they dynasties, families or individuals.