As a major show of his work opens at London’s Barbican, the Icelandic artist discusses his fascination with Romanticism and explains why he gets his mother to spit in his face every five years

The multidisciplinary work of Ragnar Kjartansson does not fall into conventional categories. Histories of film, music, theatre and literature all feed into his video installations and performances as well as his drawings and paintings. The 40-year-old Icelandic artist stages works that can go on for hours and even weeks. These epics oscillate between fact and fiction, the poetic and the absurd, and generally involve many participants—actors, musicians, friends, family members and himself. Partly inspired by his “crazy” godmother who sang for Sigmund Freud, he is also well known as a musician and singer and even has his own record label. He spoke to The Art Newspaper from his Reykjavik studio as he prepared for the opening of his first UK survey at London’s Barbican Centre.

The Art Newspaper: The Barbican seems the perfect venue for your first big UK show as, like much of your work, it encompasses art, music, film and theatre.

Ragnar Kjartansson:  It makes total sense. Ever since I was a kid we would go on trips to London and go to the Barbican and see the future.

Both your parents are actors. Was this theatrical background an important influence?

It was crucial. I was raised in the theatre and just being backstage watching these people in make-up and in rehearsal, when the same scene was repeated and repeated over and over again, was almost a sculptural thing, and a lot of my art comes from that. Also watching my parents and their friends discussing how they wanted to make people feel just seemed like crazy showbusiness and so unlike visual art.

What is real and what is play-acting seems to be a dominant theme.

Yes, it’s a really slippery thing and something I’m always working with. Complicated things like irony make everything more honest in a way—it’s how we talk together and how we communicate. Honesty is just dull, at the end of the day.

Music, in one form or another, always features in your work.

I had this crazy godmother [Engel Lund] living in my basement, who spoke 20 languages and sang folk songs from all over the world—she did a private concert for Freud in London—and her legacy is still going strong all over the world. Another huge influence was the music scene in Reykjavik. It’s a crazy city with so much going on, and when I was growing up it was the Sugarcubes and all this badass stuff happening there. Because grunge was the mainstream thing, we had the most polite band on Earth. It was called Kósý.

Why did you choose to go to art school rather than just focus on making music?

Because art school was cool. If you want to be a pop star you go to art school. All the pop stars went to art school, so that’s why I went. But then the art goddess took me by the hand and led me away from the silliness of the pop world.

In the Barbican show are 144 paintings you made daily over six months in the Icelandic pavilion at the 2009 Venice Biennale. Is painting an important part of your practice?

I look at most of my works as paintings or sculpture in a way. Even though they come from a performative plan, the painterly idea is always with me and I always continue to work as an artist-painter. If the video works don’t work as paintings, then I don’t show them.

What criteria do you apply for a piece to work as a painting?

Just something that is there and can become more profound while you are staring at it. That’s a painting, basically.

Your daily paintings in Venice were made while you were living in a palazzo, copiously drinking and smoking—living the dream (and the nightmare) of the clichéd Romantic painter.

It was acting out what it was like to be the classical macho 20th-century artist, trying to be [one of] these hard-drinking painters that I was always intrigued by in art school. They are such a very funny tribe. Making paintings is not so hardcore, but it was hardcore to be always drunk while doing it. The performance was that we were making these paintings and that we had to constantly drink beer and smoke—it was really disgusting.

Much of your work has an often extreme durational and repetitive element. Why is it so important to test the limits of both the audience and the participants?

It’s not really about testing strength. Basically that’s just our lives. Human beings just repeat stuff; we are really good at it.

But putting the final aria from The Marriage of Figaro in a 12-hour live loop or making your nieces repeat the same folk song for a six-hour stretch is rather more than just everyday stuff.

It is. But because it’s more sublime than everyday stuff it’s easier to do it than everyday life, in a way. I’m very intrigued by this constant tension between the sublime and the banal, and also with ideas like beauty. Beauty is this Satanistic thing that I really like to flirt with.

Do you repeat things to make us appreciate them more?

Absolutely. It’s like looking at a painting: you stare at it and it unravels for you. That’s what repetition does to things that are performative or narrative in their essence. When you repeat them, the narration goes out of them and they become like a painting or a sculpture and unravel. That’s why I use repetition—to somehow unravel stuff. When I was in art school that was my normality. People were repeating stuff in my family all the time, and then I got to know Bruce Nauman’s work and it was, like, OK, they do it in art also!

Do you consider yourself part of the performance tradition of Bruce Nauman, Chris Burden, Marina Abramovic, et al?

I am absolutely a disciple of those Titians.

But your work plays with artifice and reality in a different way.

Seeing those works in art school, I guess I saw through them at the end of the day as being showbusiness. I love them to bits and pieces, but there’s a lot of showbusiness. For example, Chris Burden has to make sure he’s not shot in the heart. But that doesn’t make the work any worse; I think it makes the work more profound. Marina Abramovic becomes more multilayered when you realise her work is so dramatic and truthful but it’s also matter of showbusiness at the same time. 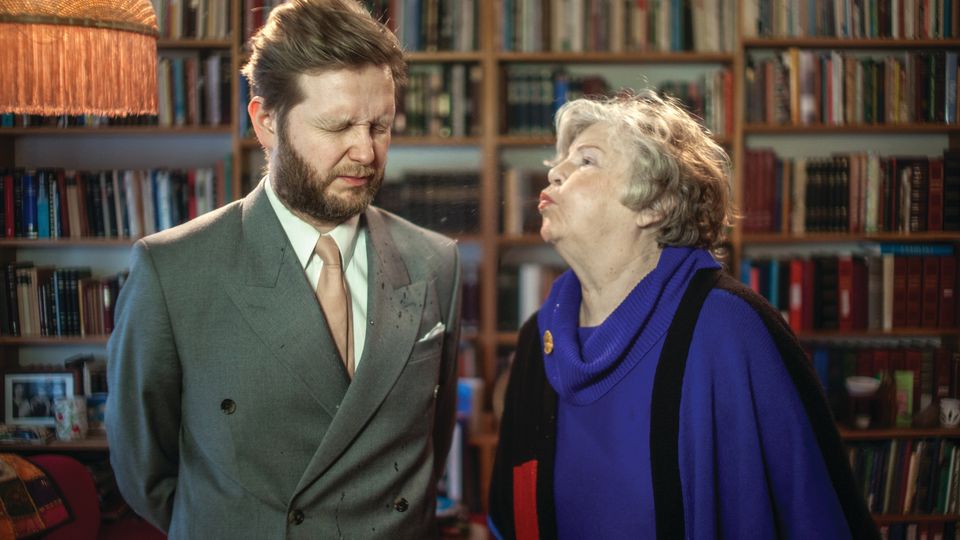 Spitting image: Kjartansson’s Me and My Mother (2015). Courtesy the artist, Luhring Augustine and i8 Gallery.

Every five years from 2000 onwards you have made a film in which your mother repeatedly spits into your face—why?

I was still at art school and I think the idea came from a work I saw by Gillian Wearing where there is a mother beating up her daughter [Sacha and Mum, 1998]. That piece was with actors, but then I realised, ‘Wow! I have the real thing! I can ask my real mom to spit on me.’ So I was ripping off Gillian Wearing but, because I didn’t know his work then, I didn’t realise I was also ripping off Bruce Nauman.

But why every five years?

Because it becomes a memento mori. My mother is very good about it. She sometimes has trouble explaining it to her friends, but it’s become this family tradition and nobody questions it any more.

Are you trying to make a direct emotional connection with your audience?

Yes, I think so. Like all artists I guess I make work for myself, because I somehow want to see it and I hope that maybe somebody will dig it. But I’m always very, very aware of having no expectations with the viewers. The minute I as a viewer feel that a work is trying to please me, then I don’t have any interest any more: it’s just not sexy.