By using The Art Newspaper website you agree to our use of cookies as described in this Cookie Policy.
Close notice
ePaperNewsletter
A still from a performance of Steve Reich’s Drumming by Portland Percussion Group

In 1972, Steve Reich’s percussion masterpiece Drumming was given its European premiere at the Hayward Gallery in London’s Mark Rothko exhibition. This week it returns to the very same venue, this time surrounded by the superb Bridget Riley exhibition, and performed by the Colin Currie Group, which specialises in Reich’s music.

The 1972 performance was only Reich’s second major concert in London. Drumming received its gallery debut at New York's Museum of Modern Art (MoMA) in December 1971, where it was performed by Reich’s ensemble. Reich couldn’t afford to bring over to Europe all the musicians necessary to play the piece so those who performed it at the Hayward were musicians who, as Reich later remembered in a talk at the Queen Elizabeth Hall nearby, “may have been famous in their own way, but not as percussionists”. They included British experimental composers such as Gavin Bryars, Michael Nyman and Cornelius Cardew.

It’s the second occasion in recent months in London that Reich’s work has been brought into close connection with visual art. At the Barbican in October, Currie conducted the first British performance of Steve Reich/Gerhard Richter, a collaboration that the German artist described as: “A stream of images, its rhythmic flow interpreted by music and, at the same time, a musical composition visualised by film images.” That collaboration had first been unveiled in the opening programme of The Shed in New York earlier this year. 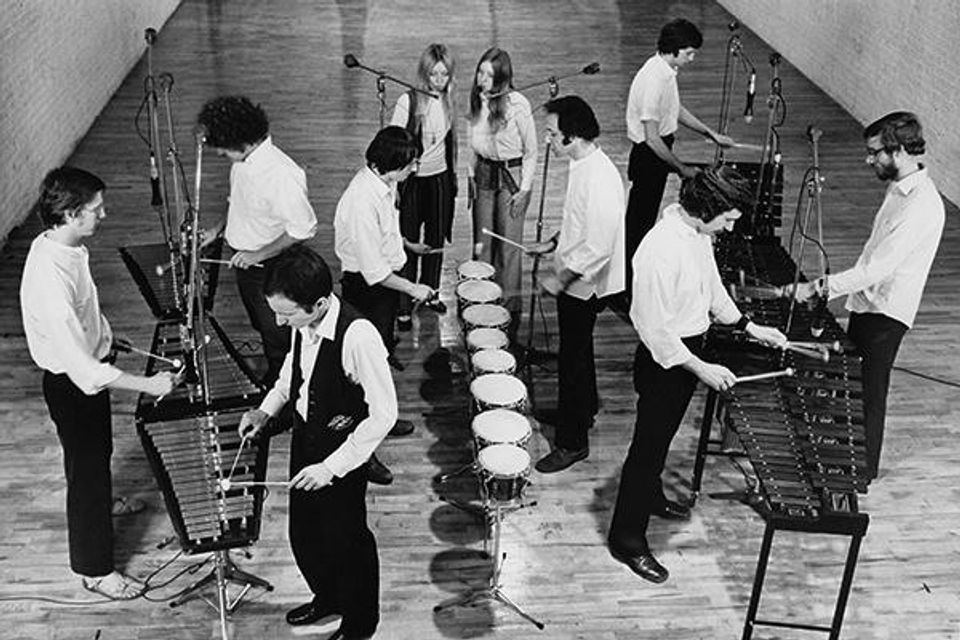 A performance of Steve Reich's Drumming in the 1970s Photo: Peter Moore

Reich is the definitive artist’s composer. Since the start of his career, he has been in conversation with artists through his music. Although associated with Minimalism (Michael Nyman’s term, which Reich rejects), his work is in fact closer to the Process art and Post-minimalism that emerged in New York in the mid- to late-1960s. In an interview for the BBC Radio 3’s recent series about MoMA, The Way I See It (a podcast is available on BBC Sounds), Reich remembered being particularly close to Richard Serra. “In 1965 I moved into a loft on Duane St and the corner of Greenwich [St] and Richard lived around the corner on Greenwich… One day he calls up and the conversation goes: ‘Piece of lead on the floor, roll it up to a pole; other piece of lead, put it on the wall, the pole is laid up against it so it holds it in place. You got it? What do you think?’ I said: ‘Richard, I’ve got to see it.’ He said: ‘Come on over.’” He found the work, Floor Pole Prop (1969), now in the collection of the San Francisco Museum of Modern Art, exactly as Serra described it, he said. But in its precariousness, “the effect of it is like magic".

In that same period, Reich took part in the Whitney Museum’s landmark exhibition Anti-Illusion: Procedures and Materials, writing a key text, Music as a Gradual Process in the catalogue. During the show he performed his piece Pendulum Music with Serra and Bruce Nauman among others. Nauman had been present as that piece had been conceived in Colorado, where Reich was playing with a microphone on a lead connected to a tape recorder. Because he was out West, Reich was swinging the lead like a lasso, he has said, and as it passed the tape recorder’s speaker, it let out a short burst of feedback. Reich harnessed these “whoops” in the performance at the Whitney, with the artists letting go of their microphones at different intervals, allowing them to swing and prompt the “phase shifting” effect for which Reich’s music is best known.

Nauman’s works are clearly indebted to Reich’s experiments. Indeed, the composer told Frieze magazine that Nauman had told him he had been influenced by Come Out (1966), Reich’s piece using the voice of Daniel Hamm, an African American teenager who was one of the Harlem Six, five of whom were wrongly arrested for a murder and experienced extreme police brutality. Reich worked with Hamm’s comment demonstrating the effect of his beatings at the hands of the police: “I had to, like, open the bruise up, and let some of the bruise blood come out to show them.” Reich then repeated the phrase “come out to show them” on two channels, one at a slightly slower speed so that they fell out of sync, before the voices doubled to become four and then eight, ultimately obscuring the original phrase. The influence of this piece is most evident in Nauman’s sound work for the Turbine Hall at Tate Modern, Raw Materials, with its multiple speakers lining the full length of the space, but Come Out’s principles have informed the artist’s works in numerous media. 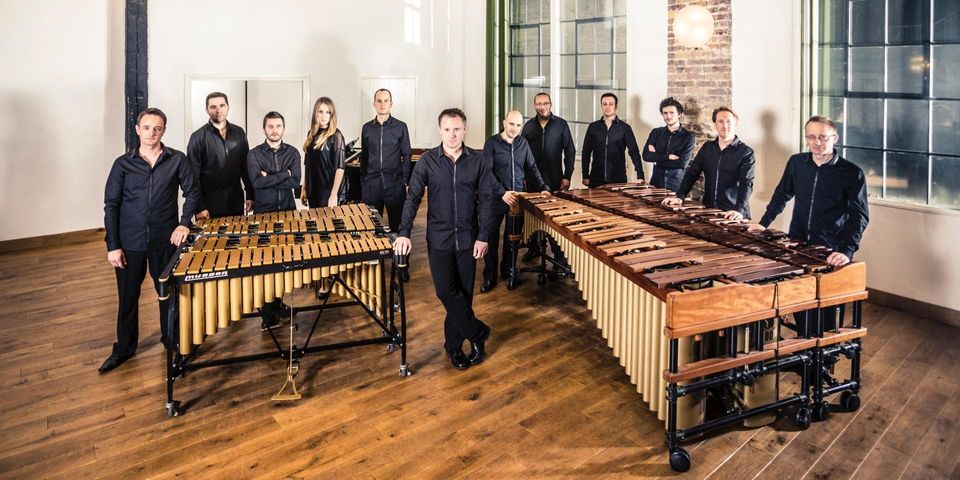 Steve Reich’s Drumming with Colin Currie Group will be performed at Hayward Gallery, London, this weekend Courtesy of Southbank Centre

Come Out is emblematic of Reich’s impact across disciplines and geographies. It is one of the Reich pieces used by Anne Teresa de Keersmaeker in Fase, Four Movements to the Music of Steve Reich (1982), a landmark in choreography, regularly performed within museums and galleries. And Come Out inspired Glenn Ligon’s series of paintings of the same name, made in 2014. Ligon screenprinted Hamm’s phrase repeatedly across his canvases, in growing density, echoing the form of Reich’s music. But Ligon’s art has also long referred to the Civil Rights struggles and their parallels today. Ligon returned Reich’s piece to its original radical context: he was asked to make a work for a benefit for the Harlem Six.

The social and humanitarian contexts of Reich’s works are often underplayed due to an emphasis on his formal innovations, but, again, artists have responded in this territory. Iain Forsyth and Jane Pollard were invited to make a video work for Different Trains 1947, a multimedia project commissioned by the arts organisation Metal Liverpool in 2017, which responded to Reich’s Different Trains (1988). In that work, he used sampled voices to reflect on his childhood train journeys as a Jewish American in the 1930s, in the context of those very different train journeys forced on Jewish people in the Holocaust at the same moment. For Different Trains 1947, the context of Reich’s work shifted to the partition of India, which led to as many as 2,000,000 deaths.

The Reich-Riley event is not a direct collaboration or response, like Georg Friedrich Haas’s Homage to Bridget Riley, which premieres tonight at the Queen Elizabeth Hall. Yet the formal connections between the forms and effects of Riley’s paintings and Reich’s music make the exhibition a fitting context for Drumming’s return to the Hayward. “More than with Rothko, which was the original setting, there are so many real parallels,” says Gillian Moore, the Southbank Centre’s director of music. “There’s the very simple idea of repetition, which is the most obvious thing, and a repetition that's constantly evolving.” She adds that because of the textures in both Riley’s paintings and Reich’s music, both forms transcend the core design or score of the work. “In Bridget's painting, you see shapes that aren't there, you see movement that's not there—they dance in front of your eyes… And that's exactly the same in Steve Reich's music, particularly of that period. You’ll have all these repeating patterns with all the percussion instruments. And then over the top of it, you hear the melody that’s not written anywhere, it comes out of the sum of everything that's happening.”

There are, Moore admits, logistical issues with performing Drumming, with the “piercing sounds” of its marimbas and glockenspiels, in the Hayward, but Colin Currie will “mould the sound” to those Brutalist concrete interiors. “All of those things you trade off for the thrill of being in the space with the work,” Moore says. That space is as much Reich’s natural habitat as the concert hall.