Showstopping stands are fast becoming a trend among London gallerists at Frieze art fair, each one recreating a different world

The “immersive booth” is already an overused term, yet its appeal is stronger than ever. It is the antithesis of the intimidating white cube model and, if done well, can create a holistic environment at a stand and keep visitors there, Instagramming away. What, if anything, is for sale on these stands is sometimes hard to tell, and indeed, the basic commercial purpose can seem unimportant. But do not be fooled; they are brilliant marketing stunts.

While the concept has been around for some time, it has gained momentum at Frieze in recent years, particularly after Helly Nahmad’s booth at Frieze Masters in 2014. Entitled The Collector, it recreated a fictitious Parisian collector’s home from the late 1960s. The duo behind it, the set designer Robin Brown and the producer Anna Pank, are back at Frieze Masters this year with a recreation of the UK Pop artist Peter Blake’s studio for the London gallery Waddington Custot.

“People have become more interested in building a private space within a public arena,” Pank says. “Building a whole world within an environment that is about selling art is challenging. The Collector was a hoarder’s flat—it was forensically accurate, and gathering the props took a long time.”

Also at Frieze Masters this year is a recreation of the eclectic home of the Italian artist Enrico Baj, who died in 2003, presented by London and New York-based gallery Luxembourg & Dayan and Milan’s Gió Marconi. Across the park at Frieze London, Hauser & Wirth has created a fictional Bronze Age museum.

The trend continues outside the fair, too. The London gallerist Pilar Ordovas, who is not exhibiting at Frieze, is staging the exhibition Marilyn, Flowers, Lips, Gun, Mirror, Cactus (until 16 December), displaying Pop art amid 44 glow-in-the-dark Gufram cactuses. “The idea of the ‘immersive’ exhibition is not new,” Ordovas says, “but I think part of its enduring appeal is that looking at art brings people together, and what better way to connect than via a shared experience?” Hauser & Wirth’s fictional Bronze Age presentation at Frieze London takes unlikely inspiration from small museums outside the capital. The Modern and contemporary works in bronze that are for sale, by artists such as Marcel Duchamp and Louise Bourgeois, are mixed with historical artefacts and “ancient” fakes from eBay, given equal billing in glass vitrines.

Neil Wenman, the gallery’s senior director, approached the renowned classicist Mary Beard at JFK International airport in New York and asked her to collaborate. “It was a brilliant heist,” Beard says. “The play-acting, whimsical nature of the project sounded like fun, while also giving me the opportunity to spotlight the important and often overlooked work of regional museums.”

Beard negotiated the loan of around 50 artefacts from private collections and smaller museums, including the Shrewsbury Museum and Art Gallery, the Great North Museum: Hancock and the Bruton Museum in Somerset. She sees the display of Bronze Age pieces within the contemporary art temple of Frieze London as a way of keeping the classics relevant: “I’m very keen on keeping alive our connection to the past and our conversation with it, and this project encapsulates that in a very accessible way.” 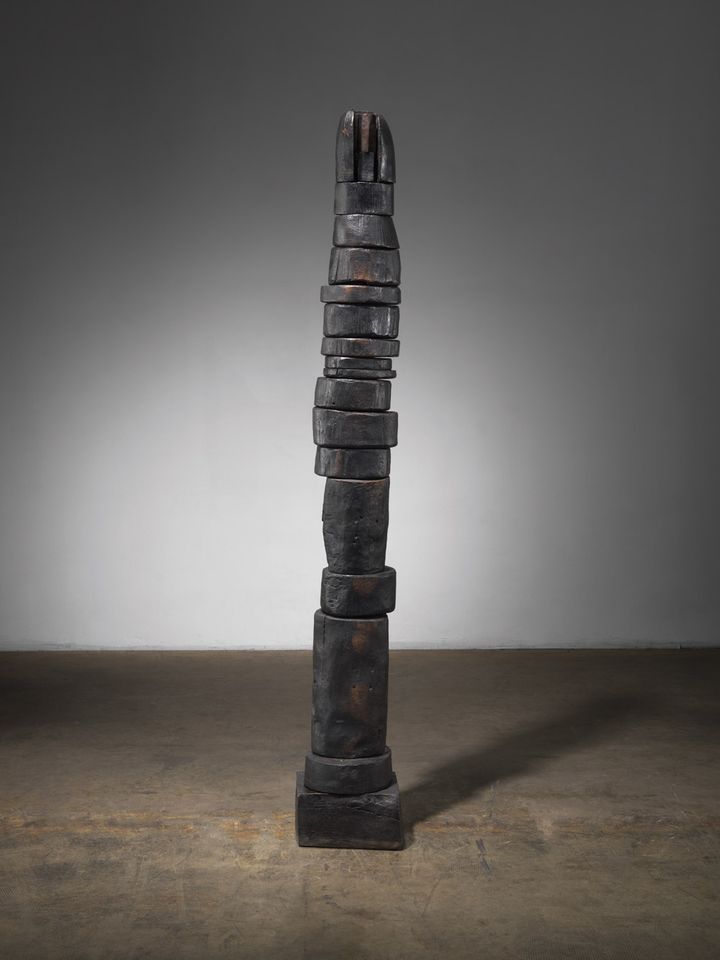 Hauser & Wirth has a history of playful installations at Frieze. In 2014, the UK artist Mark Wallinger organised A Study in Red and Green, inspired by Sigmund Freud’s study and including a sleeping security guard. In 2016, the gallery had an Instagram hit with L’Atelier d’Artistes, imagining the messy studio of a fictional artist.

These displays are “more of a personal fascination than a gallery strategy”, Wenman says. “Having gone to so many art fairs, I wanted to create this moment of excitement for the visitor. It is a very light critique of the way we look at things.” He thinks such tongue-in-cheek creations work best in London as the “latent sense of humour is quite British”.

But does spectacle overshadow selling? Commercial success remains Wenman’s priority: “We have always done very well during Frieze week.” However, immersive booths will not become a habit for the gallery, he says. “Next year we might do something totally different, maybe just a performance piece.” 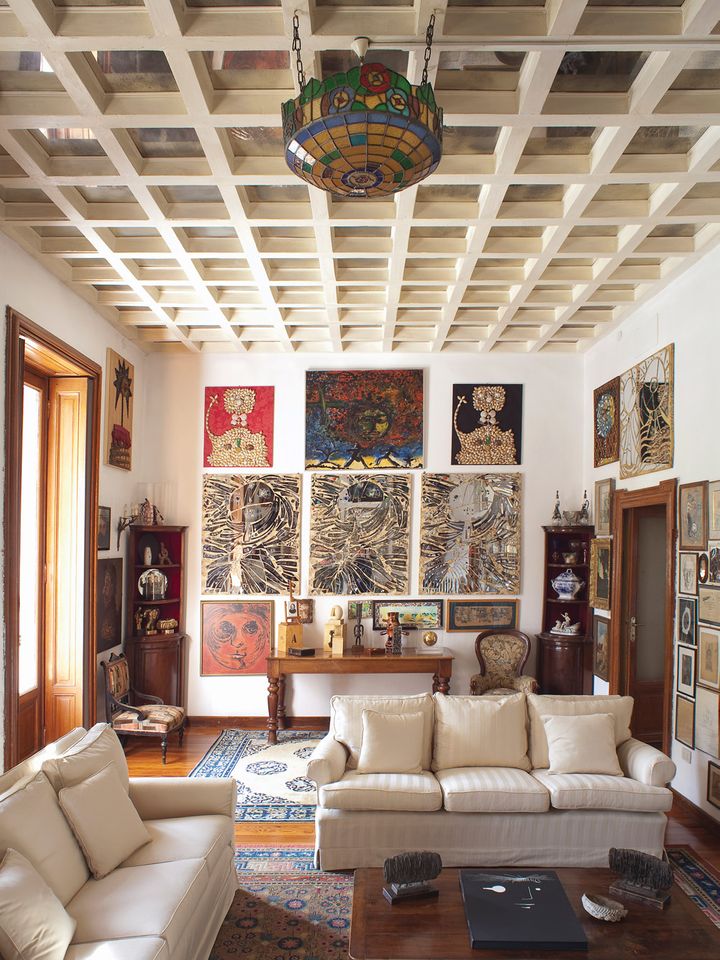 The artist Enrico Baj regarded his home in Italy, filled with his paintings and sculptures, as a work of art in itself photo: Filippo Armellin; all works: Archivio Baj

Gió Marconi’s father, Giorgio, has been connected with the work of the Italian artist Enrico Baj (1924-2003) since the 1950s. For Frieze Masters, the Milan-based dealer has collaborated with Luxembourg & Dayan gallery to recreate Baj’s home in Italy—his greatest Gesamtkunstwerk—which is full of his paintings and sculptures that delight in the absurd and flirt with Dada, Surrealism and CoBrA but never conform to one movement. His widow, Roberta, still lives there.

The gallerist Alma Luxembourg says: “It is kept in the same spirit as when he was alive, full of his works, which were hung by him in a very quirky, personal way.” In Baj’s work, Luxembourg sees “playfulness on one hand and, on the other, so much of what is happening in contemporary art today”. After a solo show in New York in 2015, Luxembourg & Dayan this year published a book, Enrico Baj: the Artist’s Home. 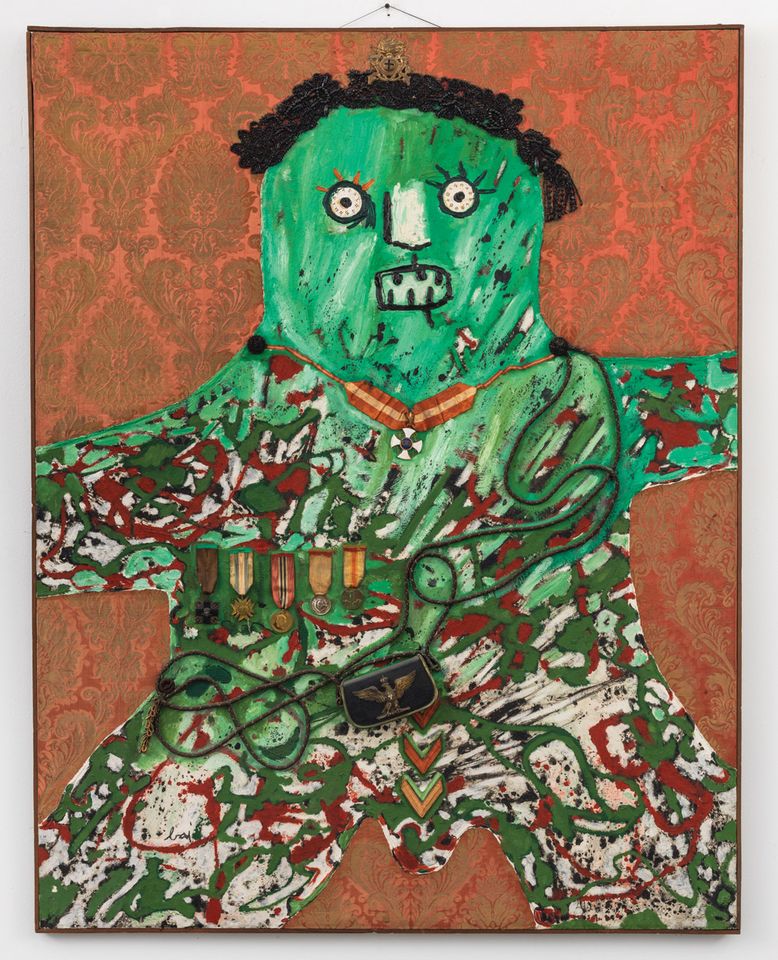 At Frieze, the galleries are showing paintings from the late 1950s to the 1980s, hung as the artist would have displayed them. While not “stripping Roberta of all her furniture and carpets, we have similar furniture and have taken items like embroidered cushions and rugs from the house”, Luxembourg says. “It’s in the spirit of Baj, without making it a pastiche. You want to distinguish yourself in an art fair, and these presentations give the public an opportunity, whether they know the artist or not, to immerse themselves in a world.”

She dismisses the idea that immersive booths could distract from the act of looking at art: “In fact, it can be more intense.” At Work with Peter Blake

Roxana Afshar, the sales director at Waddington Custot, was “blown away” by Brown and Pank’s Frieze designs for the Nahmad stand in 2014, and again the following year when the gallerist “reimagined” a mid-20th century mental hospital as part of a presentation of work by the French artist Jean Dubuffet. She then asked Brown and Pank to recreate the studio of the Pop artist Peter Blake at Frieze Masters as “a window into his mind and working practice”.

Afshar is “making the most of the trend for immersive booths. They give a different way of relating to work for the viewer,” she says. Employing a designer and producer is an added expense but, she adds: “The response will hopefully be bigger. It is an experiment but we wanted to do something to celebrate Peter—his first exhibition at Waddington Galleries was in 1972.” 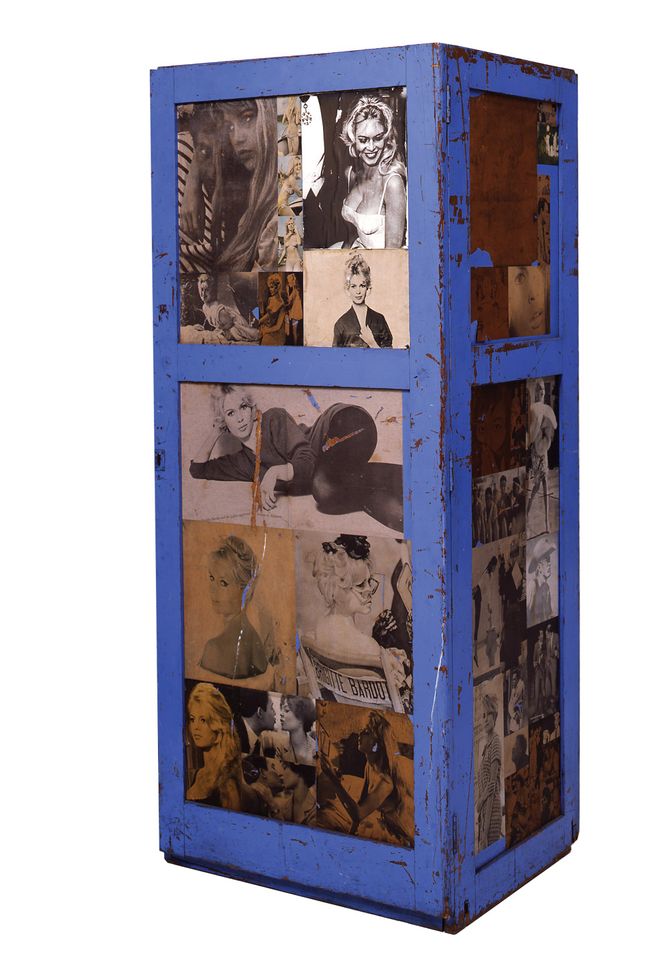 The fractured structure looks like it has been torn from Blake’s west London studio, with exposed brick walls, floating steel beams and windows lending an authentic, industrial spirit. The 30 works, dating from 1959 to 2000, belong to both the gallery and the artist. A central workspace is weighed down by ephemera—papers, books, photographs and some of the objects that Blake likes to collect, particularly wrestling memorabilia.

“We thought about it as a collaboration with Peter,” Pank says. “This time we are not trying to forensically recreate something, but to show how Peter works. He’s incredibly game for an adventure.”

The booth changes a little each day. “Objects will move. It’s like a collage.” Part of what made Nahmad’s The Collector so emotive was the use of period music, and the Blake stand includes the music that inspires Blake as he works.