‘A spiral of poets, all at once’: Precious Okoyomon, winner of the Frieze Artist Award, talks about their Tower of Babel-themed commission

An artist, poet and chef, Okoyomon discusses their inspirations as well as the ecosystems they have been creating 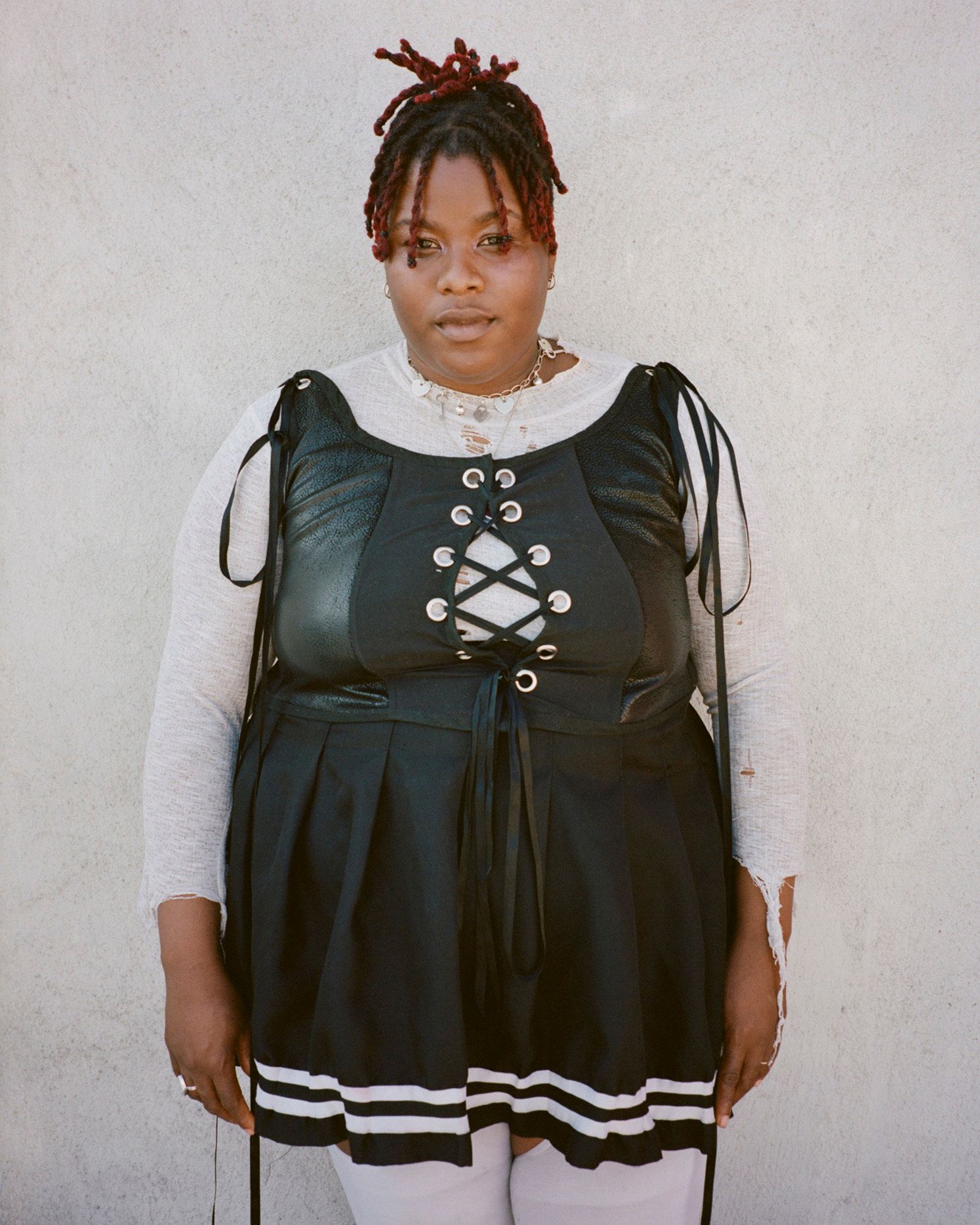 The Frieze Artist Award, which provides an opportunity for an emerging artist to present an installation at the Frieze New York fair, went this year to the highly versatile Brooklyn-based creator Precious Okoyomon. Last week, the Nigerian-American artist, poet and chef performed in a piece conceived specifically for the fair’s site, the Shed, joining friends to ascend steel platforms covered with reflective material and netting for the installation This God Is A Slow Recovery. Drawing on the Biblical story of the Tower of Babel, Okoyomon read from their poem Sky Song while the others recited poetry and other texts and three string musicians played Olivier Messiaen’s Quartet for the End of Time. The result was a lively cacophony, and today through 9 May, visitors to the fair will be able to watch a video of the performance, which is also now streaming online.

Okoyomon, who explores themes including Blackness, colonialism and queer identity and often incorporates nature and organic materials like wool into their work, has been having quite a moment. They currently have an ecosystem installation at Performance Space New York and are preparing to transform the rooftop of the Aspen Art Museum in Colorado into a garden with sculptures for a show that opens on 10 June. The artist is also in the lineup for an exhibition opening next month at Luma Arles. Okoyomon spoke with The Art Newspaper about the Frieze commission, which is supported by the Luma Foundation, and other pursuits.

The Art Newspaper: Tell us about your Frieze commission. The performance seemed like an arduous physical effort.

Precious Okoyomon: It was. I didn’t realize how it was grueling it was until after it was done. It was so much fun, with all of my friends, for four hours. I got this commission last year before Covid even happened, and the original thing was supposed to be outside the art fair. The original idea was about dreaming collectively: I was going to create giant hills and everyone would climb up the hills and roll down them. But you can’t do that with Covid. So I worked with this construct of the Tower of Babel: I wanted to have this orchestra surround [the performers], but then there was the budget so we had to scale it down. But it’s nice and organic. I wanted everyone to jumble up their poems. All of our poems actually meshed together, which was so funny. Everything became entwined. There’s this beautiful chorus, a spiral of poets all at once, and I realised that we were all actually talking about the same thing. All of the poems overlapped, and we were all saying the same prayer. It was like chaos itself, a universal pulse. 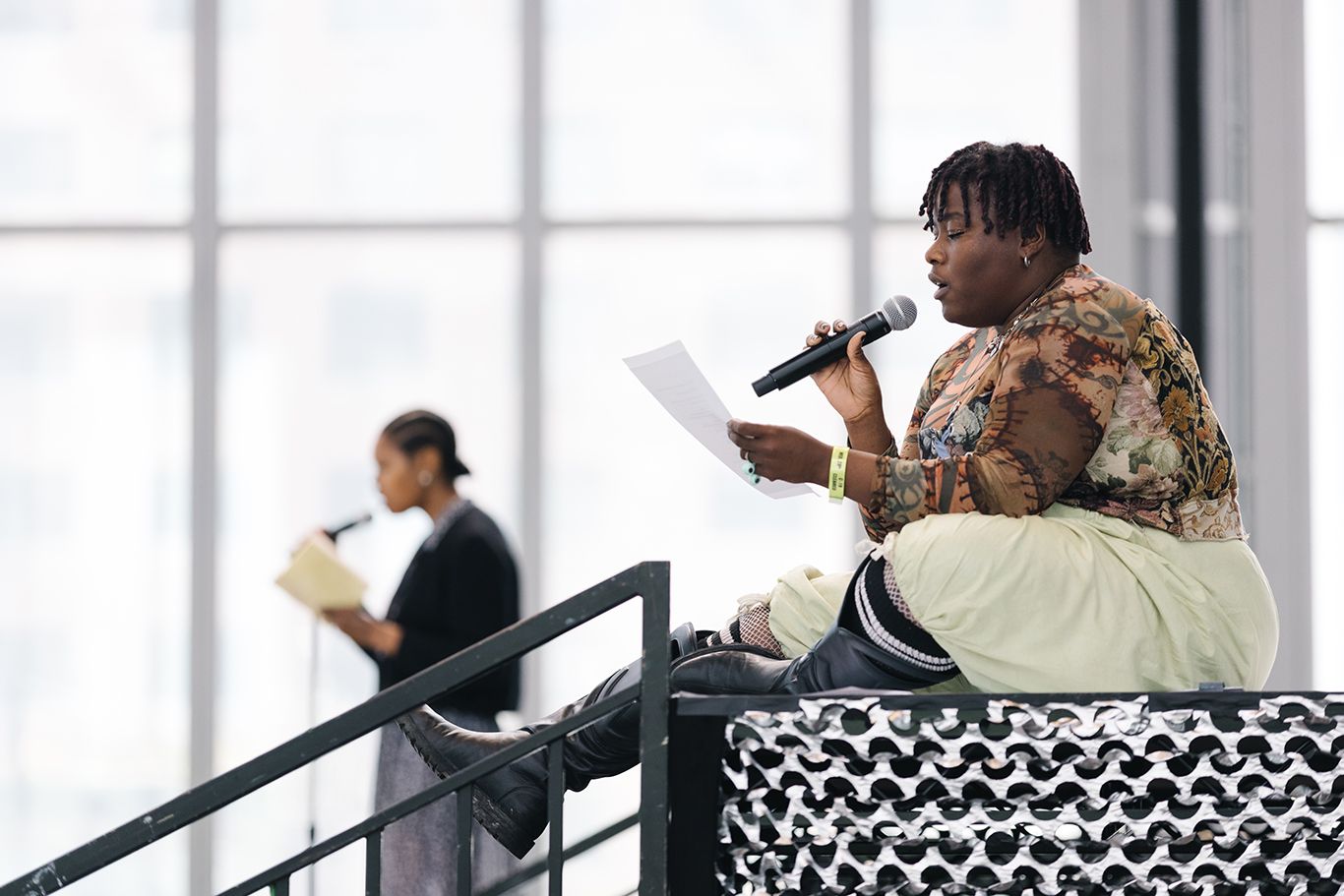 Precious Okoyomon, right, joined friends in reciting poetry at the Shed for the installation This God Is A Slow Recovery Da Ping Luo

How did you compose Sky Song, the text you read?

They are over 20 poems I’ve written in the last four years. I find myself writing poems more organically when I’m somewhere just walking. I was speaking to the sky, about the sky. They became like little meditations. I chose the pieces that went with the orchestration.

Your first book of poetry, Ajebota, was published in 2016. What is the significance of the title?

It’s the top of the cream, the best, when you get milk and the creaminess flows to the top. It’s what my cousins would call me when I was young. I was sick and stayed inside and read a lot. I was this little piece of butter, and if I went outside in Lagos, I would melt and I would get these fainting spells.

You moved from Lagos to the United States when you were 7, settling first in Houston and later in Ohio. Was the cultural change a challenge?

Houston wasn’t that bad because it was hot, but in Ohio I had this horrible cultural shock.

It was a tiny school in Chicago called Shimer. We were reading things like Nietzsche and it was very knowledge-based. In my class, 20 graduated and the whole school was like 50 people. It seemed like the most absurd thing I could do at the time. It made pure sense and I really liked talking to the people I met there.

When did you realize that you would become a poet?

You don’t become a poet, you just are a poet. I heard things in the world, I always heard things. My feelings turned into poems and I would hide them everywhere, put them in the ground. Writing was always easier for me than talking. I just wrote all the time and I read. I didn’t communicate for a while in a normal way. Everything has always been a poem for me. I’m working on a new book of poems, But Did She Die?, that’s coming out in August.

For your installation at Performance Space New York, you’ve created an ecosystem in which ash from burnt kudzu falls from the ceiling, landing on a bank and a stream surrounded by moss-covered boulders and gravel. What was the thinking behind that?

I just wanted to make a space where you could get outside of time. It felt appropriate for all the deaths of the last year: everything became heavier, and you could feel it in the air. You could go there [to the gallery space] and sit there and think and escape from the notion of being in this world. I created a show that created life, and I just wanted people to sit in it.

What is the significance of the kudzu, an invasive vine that you also planted in Earthseed, your installation last year at the Museum für Moderne Kunst in Frankfurt?

What do you do with a monstrosity like kudzu? You have to burn it. They burned it for me in Frankfurt after the show was over and mailed me the ashes. I wanted there to be a continuation: my work always has a continuation, it’s one long poem. Kudzu was brought here because the soil was messed up [eroding] from growing cotton, and you put the kudzu in, and it holds and binds a lot of soil together with a root system. Kudzu is about resilence; it’s funny that it’s so criminalised. [Kudzu is classified as an uncontrollable noxious weed by the US government and is illegal to grow in many states.] For me, it’s how I see Blackness and life in the Americas and what’s not allowed. 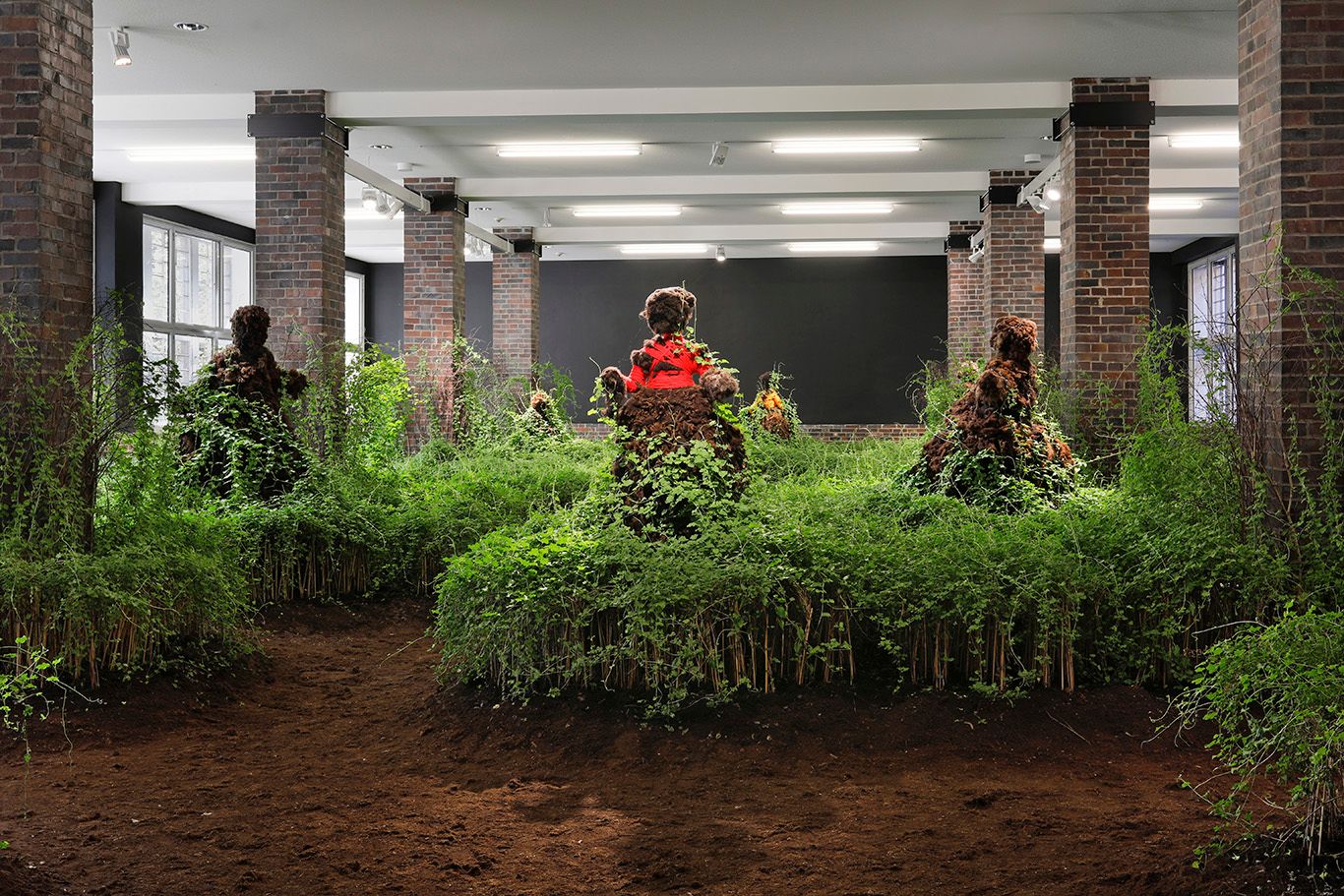 Have you always been interested in nature and organic materials?

In addition to kudzu, the environment you created for the Museum für Moderne Kunst included life-size dolls. What is their significance?

My grandmother would make me dolls out of dirt and wool. In the Frankfurt show, they’re protecting angels for the ecosystem. I put my blood and sweat into them, my heart into them. The smell of the raw wool mixed with the kudzu: I’d never smelt anything like that before.

Your rooftop installation for the Aspen Art Museum will be a mix of indigenous plants like kudzu and honeysuckle and native plants like dandelions and mugwort, which will cross-pollinate while hydrated by black algae water, as well as sculptures. Apparently you’ll travel periodically to Aspen and hold services on the solstices focusing on Black feminism, self-fragilisation and queerness, and invite participants to chant and meditate on the rooftop.

It’s the idea of mixing what doesn’t get to thrive and isn’t supposed to thrive with what’s supposed to be there–making space for the invasive plants. Music will be triggered by motion, and I’m working with different musicians I love for every season the garden is up. The sculptures will change with the seasons, too. I go back to Aspen on Sunday to finish the sculptures and start building out the roof by May 15.

Kudzu is about resilence; it’s funny that it’s so criminalised. For me, it’s how I see Blackness and life in the Americas. Precious Okoyomon

Recently you had an artist’s residency at Luma Arles in France, which is also featuring your work in an exhibition opening next month. What have you created for that show?

I love Luma, and I’m making this kind of monolith terrarium filled with giant West African snails. They love to snack on kudzu and some of my other favorite invasive plants. Black algae will drip down on them. I grew up with these snails in Lagos, and they’re illegal to bring into the US. In West Africa you just eat them, but in the US, they never caught on.

In 2018 you formed the queer cooking collective known as the Spiral Theory Test Kitchen with Obbi Savör Menuez and Quori Theodor. A lot of your inspiration has been conceptual and experimental, like a menu inspired by attendees’ food phobias or concoctions like birds marinated in Nigerian alligator pepper and cooked in manuka honey. Does the project continue?

We took a hiatus because of Covid, but we’re going to have a dinner in Aspen—it’s going to be crazy. My mother taught me how to cook when she had a restaurant, and I’ve always been into it. What is love more than cooking for someone? It’s one of the greatest things you can do for someone; it changes their gut. Spiral is a magnificent project: I get to work with close friends and we get to push the limits of what people feel comfortable with. Food can be an explosive pleasure, and the cooking is like poetry itself. You surrender your fear, and you eat. I feel like the meal isn’t done until someone tells me, “I’ve never had anything like that in my mouth before.”

My life is just fun. I do whatever I want. My usual perfect day is I wake up and roll down a hill, I make a sculpture, and a poem becomes a dinner I eat that night. The joy is I get to live an amazing life: everything is interconnected, entangled. 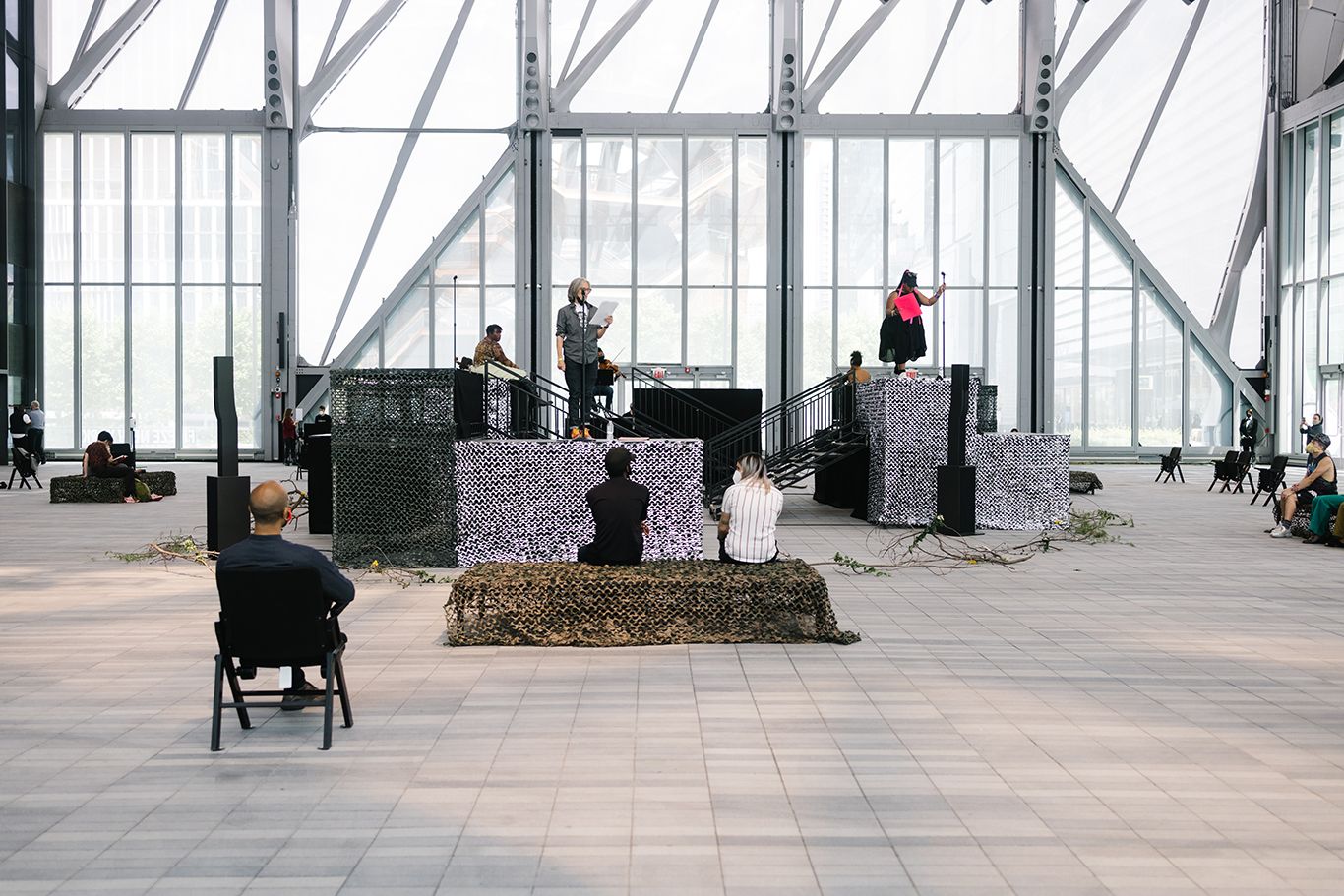