Cheryl Pope on love, representation and the comfort of textile art 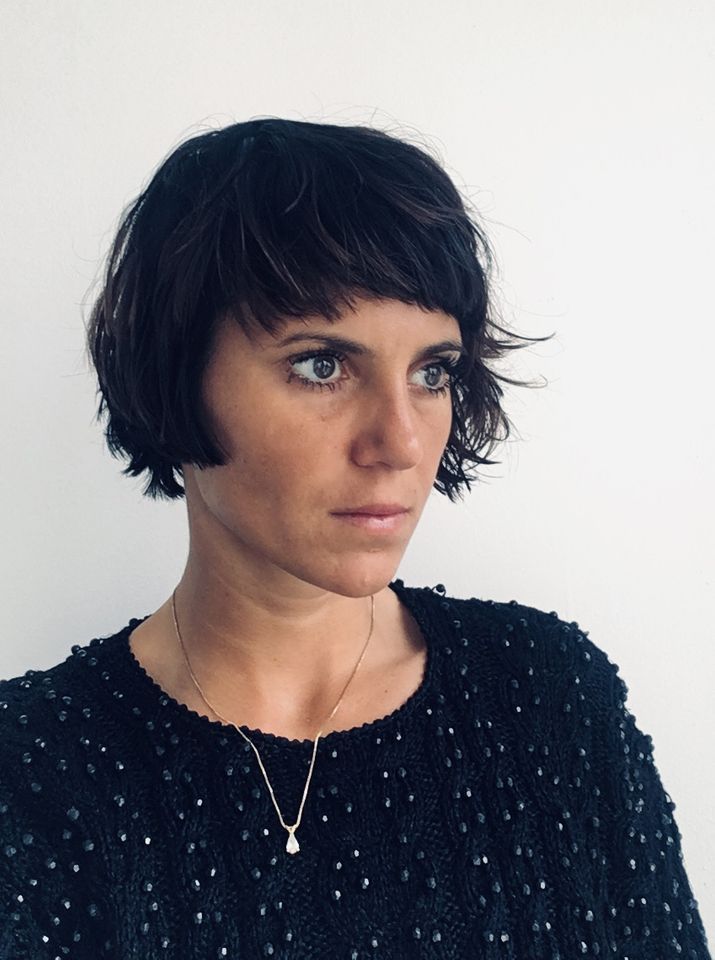 The artist Cheryl Pope says her work has always dealt with vulnerability. But the New York-based artist has taken this to a personal level for the first time by placing her own body in her work. The new series of semi-nudes showing Pope and her partner made with wool roving is now on view in her hometown of Chicago, in the solo show Basking Never Hurt No One at Monique Meloche Gallery (until 17 August).

“It’s a direct reflection of my immediate life,” Pope says. “It’s really about my responding to what it has been to be in a biracial relationship, how that is moving through the world—the vulnerability of it,” Pope says.

“Story is really being celebrated right now [in art], and I’m trying to move within the space between abstraction and narrative,” Pope says. “Too tight of a story remains only my story; if it could be a bit abstract or looser, it could become a story that many people can connect with.” 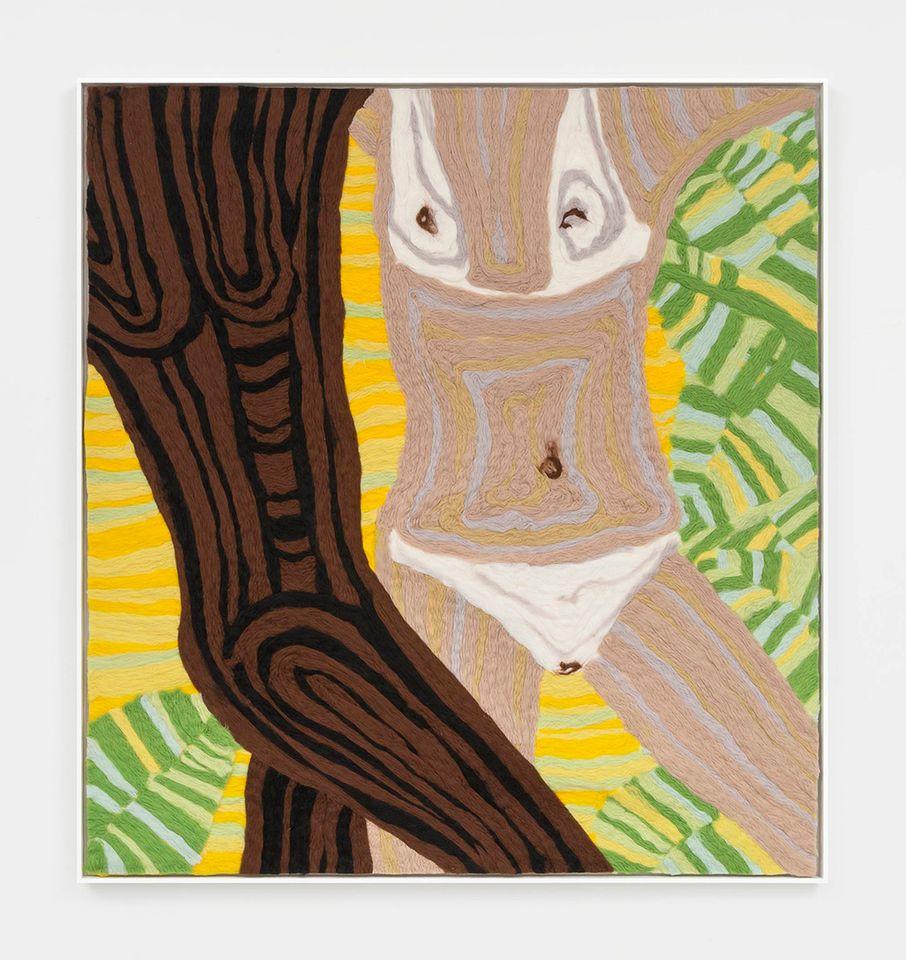 The heads of Pope and her partner are not visible in her works, which show a tangle of torsos and legs, with a feeling of both zinging energy and comfortable familiarity. The figures are situated on ambiguous, colourful backgrounds—geometric zig-zags, red-and-pink zebra-like irregular stripes, large tropical leaves articulated in yellows and greens—and “you’re not sure if this [space] is interior [or] exterior”, Pope says.

“There’s a bit of humour in the way that they’re articulated—they’re playful,” Pope says. Indeed, there is something joyful about the nudes, and the way the bodies are outlined imbues them with a guileless frankness. 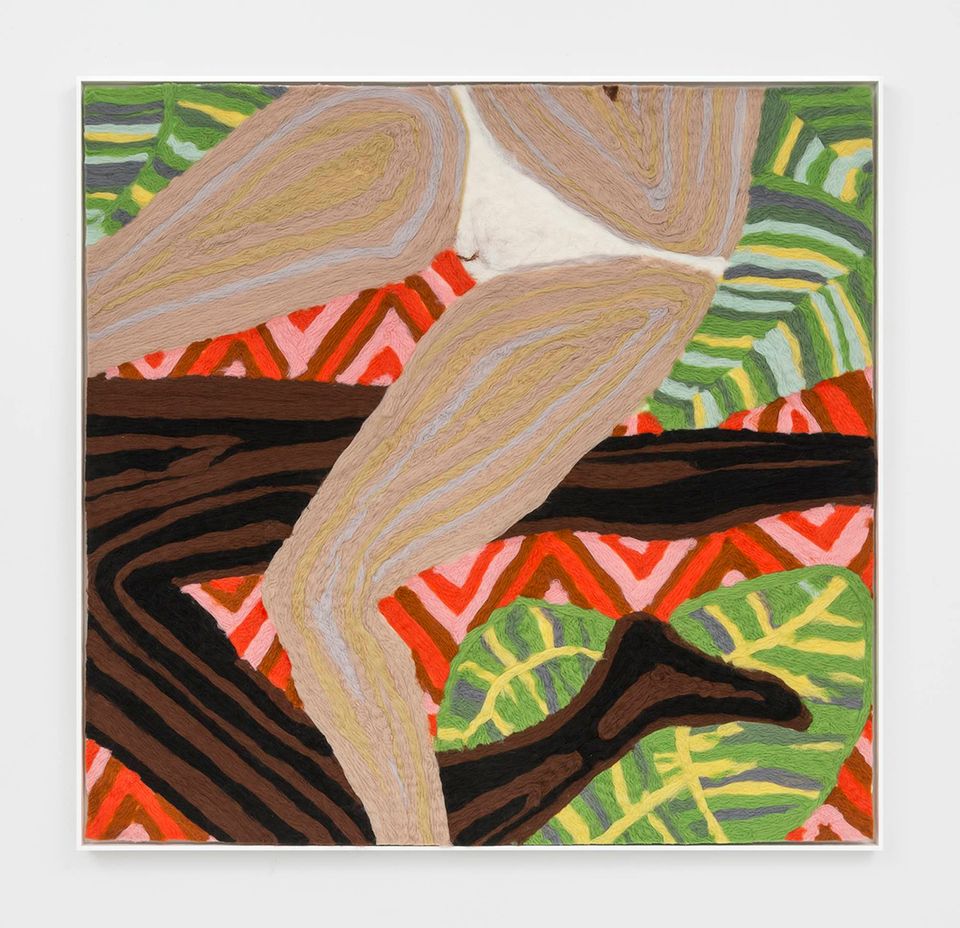 To make the works, Pope fills in cartoon drawings with pre-dyed wool fibres, which she then punches down with a needle-like tool through a layer of cashmere wool-blend cloth over foam. The wool roving and cloth bind together through this process, which Pope compares to the dreading of hair. “It’s still so bodily,” she says of the materials.

Pope attributes the current popularity of textile pieces, to the anxiety and pain of the current moment, and a physical disconnect in grappling with it. Textiles are “the first thing that’s wrapped around us when we come out of the womb and it’s on us every single day," she says. "I think visually we’re moving towards that because we need a warmth, we need to be loved again, we need that cloth wrapped around us.”

Despite the material and technique of this new series of works, “I am talking about them as paintings”, Pope says. Placed in shadowbox frames, “they’re not folded up, they’re not suspended on the wall like cloth”. This brings the works into an art historical context that also allows for a discussion of race and representation. “I wanted [the series] to be within the history of painting,” Pope says. “If I had a child, they would see people in the painting that look like mom and dad in the same space, [not] white people in one space and black people in another space.”

“The work I was previously doing was about equality and race and injustices and safe spaces,” says Pope, who has also made pieces dealing with gun violence in Chicago. She says it was sad for her to make those works and to witness them in a show, "because it was really confrontational around a lot of the trauma of the youth in Chicago”. The new works “still deal with those same issues”, Pope says, “but it’s trying to come at it through love”.