'I have a work made of mortadella': inside the collection of Gemma De Angelis Testa 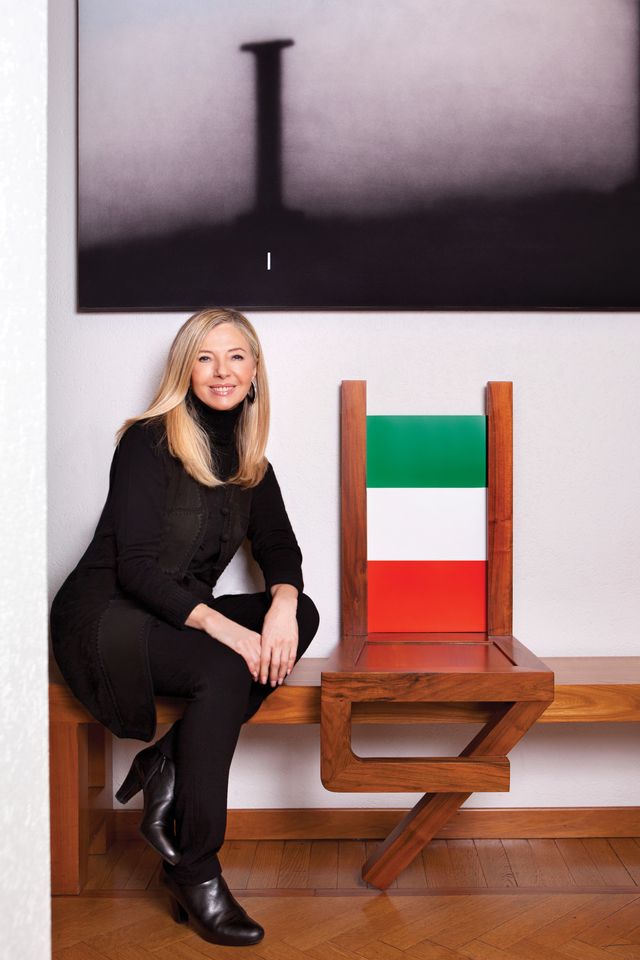 Gemma De Angelis Testa inside her home with a work by her late husband Armando Testa (Sedia Antropomorfa, 1976) and Ed Ruscha's IF (1995) Photo: Barbara Corsico

Gemma De Angelis Testa is a private collector with a public-minded mission. In 2003, she created ACACIA, an association of around 100 friends of Italian contemporary art, which supports artists through its annual awards and has donated some 30 works to Milan’s Museo del Novecento. She honed her eye for contemporary art during her marriage to the artist and advertising creative Armando Testa (1917-92), whose legacy she champions today through the curation of his archive. Together with the artist Michelangelo Pistoletto, a friend and student of Testa’s, she has selected sculptures, photographs, posters and paintings by her husband for a solo presentation with Galleria Continua at Frieze Masters, accompanied by a new two-volume catalogue of his work.

Gemma De Angelis Testa: When we met, one of the first things my husband said to me was: “Paintings are for museums and galleries—the walls of the house must be kept as white as the pages of a sketchbook.” Perhaps as a creative he was right in not wanting to be distracted by other images. A few sporadic purchases aside, the real collection therefore began only after his death [in 1992].

What was the first piece of art that you bought?

Cy Twombly’s Vengeance of Achilles (1962). I’m particularly fascinated by the poetry of his writings alongside the image. The presence of image and word together was something I sought out in the first works I bought. Today, this piece forms a dialogue with certain works by Anselm Kiefer, Pier Paolo Calzolari, Tracey Emin, Ed Ruscha and Richard Prince.

Belt Exercise by Monica Bonvicini, the winner of the 2019 ACACIA award. The bronze belt synthesises her reflections on the relationship between gender and space.

It is not only a work’s economic value that counts, but the additional transactions that its installation may entail. For example, I recently purchased a work by Pascale Marthine Tayou that is made up of 140 sanpietrini paving stones, each weighing 4kg. I asked various specialists and ultimately a structural engineer to confirm that the wall it was intended for could support its weight. It would have displeased me greatly if it made a surprise visit to the neighbour downstairs by crashing through the ceiling.

The works in my house have been chosen with love and have helped me understand many things in life. For this reason, it is difficult for me to choose a single piece to save in an emergency. I think I would rather reciprocate their love by choosing to share their fate.

Dreams are fundamental—they help us to live, especially living as we do in a society full of contradictions. From a young age, a favourite daydream of mine has been to create my ideal museum. I would like to see it realised one day and share it with everyone.

A work by my husband, Lampadina limone (1968), which uses a real lemon that needs to be replaced regularly. Also his entire series of works on food, such as Tavolo con scarpine (1980), which has a tablecloth made of mortadella.

There is one work that was actually created in my house at the request of the artist himself. It’s a tiny figure, as small as an ant, drawn on a white door by the artist Nedko Solakov. It’s so small that guests only see it when I point it out. I check daily to make sure it doesn’t accidentally get rubbed out.

My husband, without a doubt. A brilliant and fascinating man, with an unbeatable sense of irony, with whom I continue to share my life every day through my work in his archive and by promoting his exhibitions.