She was one of the first artists to use the land in her work, and now an Armory exhibition showcases the full range of her career Michelle Stuart in her New York studio Bill Milne. Courtesy of the artist.

Since the 1960s, Michelle Stuart has developed a body of work grounded in environmental, astronomical and archeological references. She has often experimented with non-traditional materials: works such as Sayreville Strata Quartet (1976) were made by pulverising and imprinting soil and rock from an abandoned brick quarry on paper panels by hand. In more recent works, she has revisited photographs and objects in her archive, creating gridded vignettes of the land and space. Early in her career, she worked as a topological draftsperson for the US Army Corps of Engineers, following in the footsteps of her father, who mapped water lines.

The Art Newspaper: You are often described as one of the few women pioneers of the Land Art movement, but your practice is remarkably diverse. How do you feel about this categorisation?

Michelle Stuart: Other people categorise you and there’s nothing you can do about it. I was always interested in the landscape and made works with the earth early on, so maybe I would be called a Land Artist. I knew other Land Artists and don’t dislike the categorisation, but it does put you in a box, as all categories do. I wasn’t in that box all the time and didn’t intend to stay there. Categories can be helpful for art history but are also hindrances for artists.

Your early earthworks—like Niagara Gorge Path Relocated (1975)—were intended to be ephemeral and biodegradable, whereas most Land Artists in that era were leaving their signature on the landscape.

Yes, and I wasn’t interested in that at all. I wanted to speak out about the land. I wasn’t building monuments and didn’t care whether the works lived forever. The pieces could live photographically but I never wanted to plump down a metal rod anywhere. I thought conceptually, whereas most Land Artists wanted to create a piece of sculpture with the land. Robert Smithson is someone I do relate to because he also thought conceptually. 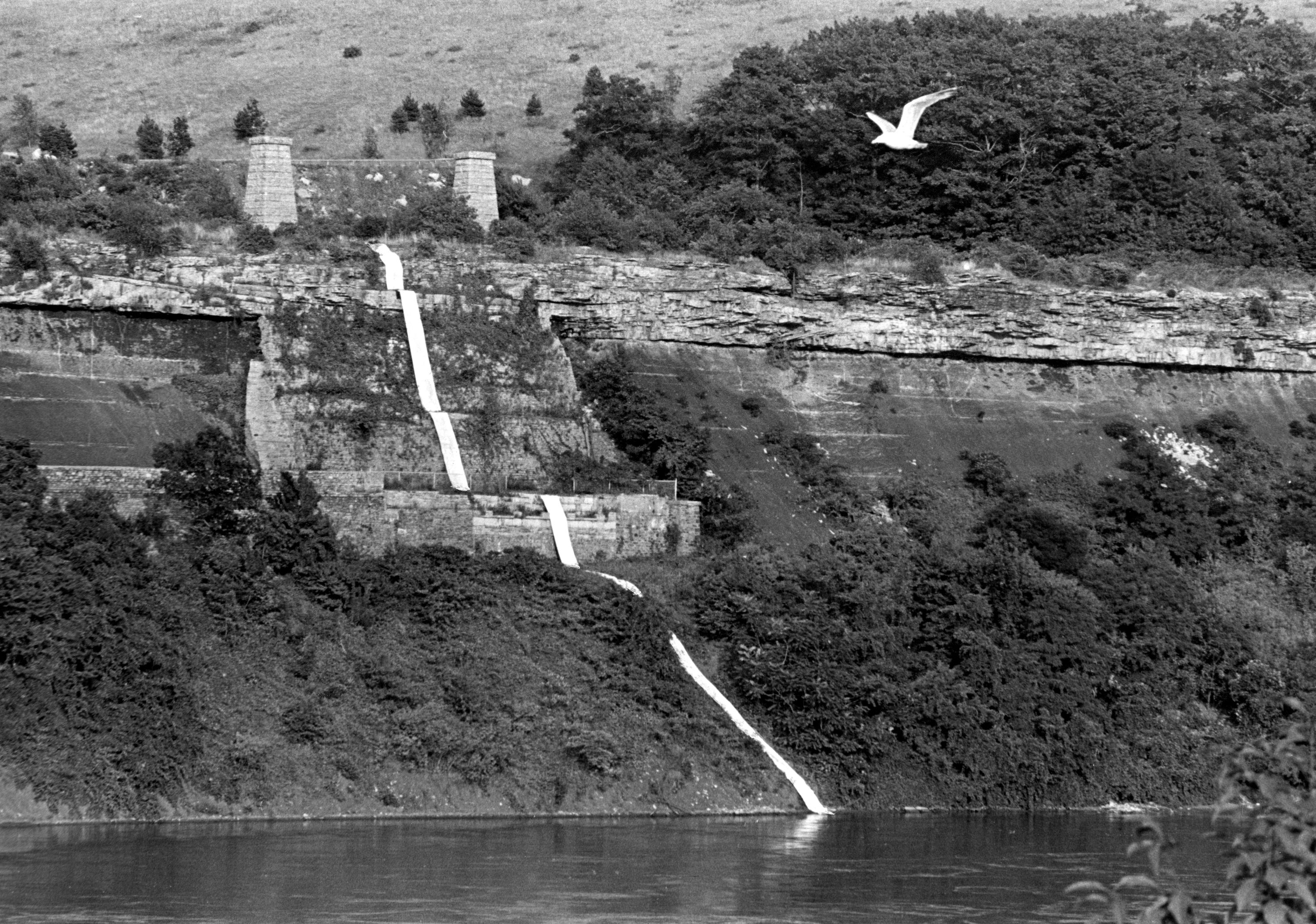 There is still a lot of physicality in your practice. You once described your hands bleeding while creating your work.

All the pieces I’ve made with earth were physically laborious, but also led to some great discoveries. When I was creating the scroll for Niagara Gorge Path Relocated, for example, I discovered a small talismanic object—likely Indigenous—that resembled a little package buried in the earth. It influenced some of the books I made later on.

The show includes one of these books, Galesteo II Book (1977), with pages made from rubbings of red earth.

This book was made using earth from New Mexico that I collected in the 1970s, while I was visiting early Indigenous and Spaniard sites. I’m interested in archaeology and read about an archeologist who travelled to the Himalayas and described visiting a cave that was full of Buddhist books and scrolls. I imagined these books disintegrating in the cave, and how the text must be gone but the books are still there. I made volumes of pages without text on them and bound the books closed. These are books of secrets. 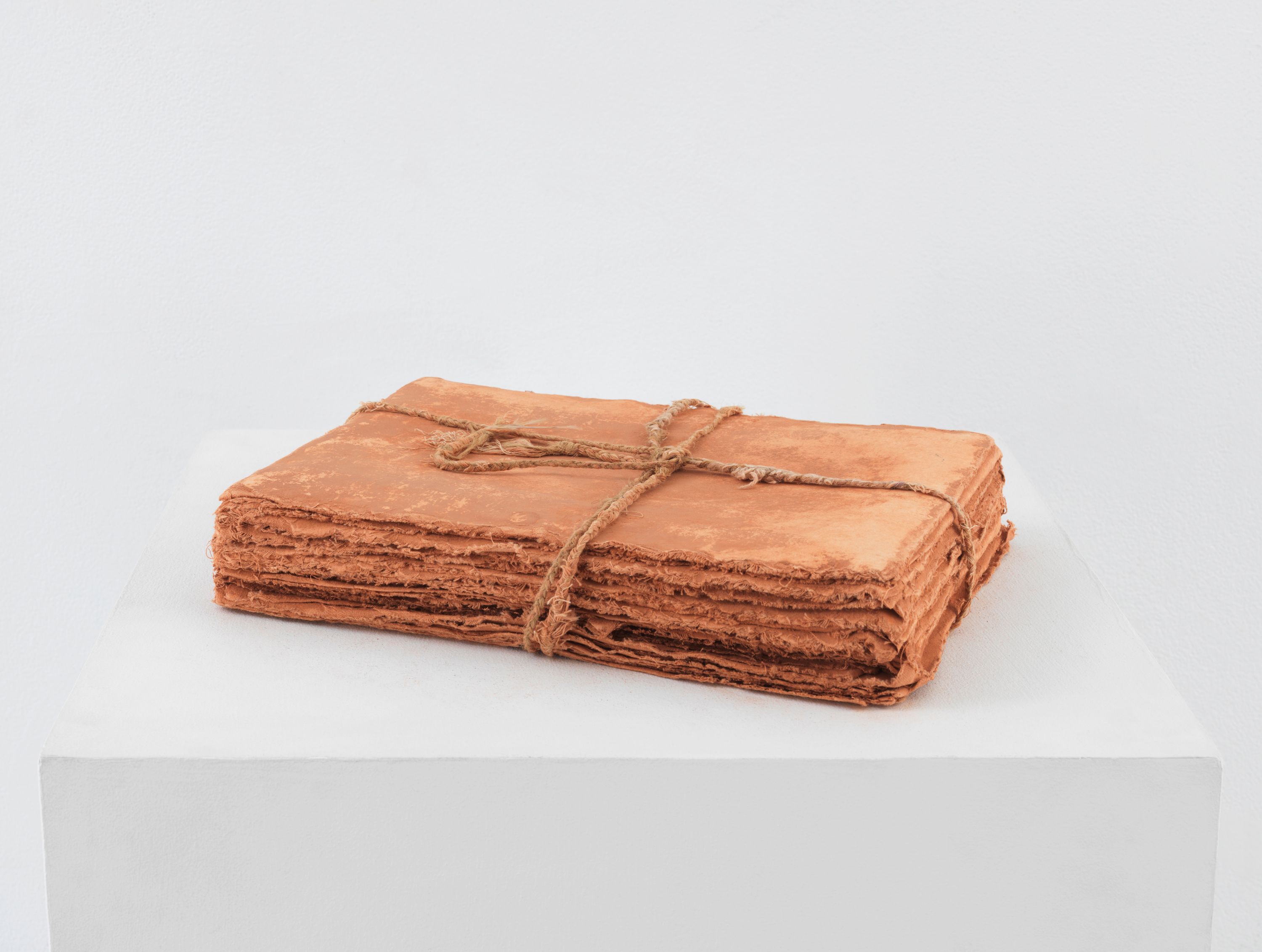 You are also showing a concept drawing you made for Stone Alignments/Solstice Cairns (1978-79) in Oregon, your only surviving earthwork, designed to align with the summer solstice.

It’s one of several concepts I made when the [now-defunct] Portland Center for the Visual Arts invited me to do an exhibition there, and I asked if I could do an outdoor work instead. They agreed and gave me $2,000. The money mostly went towards the airfare. I didn’t make a penny and didn’t want to. The director found someone who was eager to drive me around to find a site, and then we built it with boulders that had been donated to us. The work was conserved for some time, but I haven’t been back to see it in many years. An art writer sent me a letter a few years ago saying that it looks like the ancient sacred sites that have cairns but are falling apart. I like that. This work also demonstrates your interest in literature. You buried a poem by Rudyard Kipling and a Taoist poem by Han Shan at the central cairn.

I put these poets next to each other because one was very Western and the other very Eastern. It was about how America is the meeting point of the East and the West.

You also assisted Diego Rivera early in your career.

That was fortuitous. I lived with a family in Mexico whose daughter was friendly with Diego and well-versed in his needs for a new commission, Insurgentes (1953). I was studying painting at the time and complained to her that the teachers never showed up. Rivera needed another assistant, since none of them lasted too long with him. He came down from the scaffolding and said: “Welcome. I’ll try you out.” For me, it was simple work, just filling in colour between lines and painting very flat on wet fresco.

Did the experience pique your interest in political art?

I realised that you have to be a very angry person to make political art. Your anger has to be specifically placed on politics and, at the time, I was interested in many other things, like poetry and literature. I picketed the Whitney and marched at every march, but, as an artist and a feminist, I was more specifically interested in issues around injustice and the environment. In the 1970s, I wrote about oil spills and the killing of penguins for an ecological issue of the [grassroots feminist publication] Heresies, which I published alongside women like Lucy Lippard. Most of the work I make stems from this interest in ecological factors in the world. 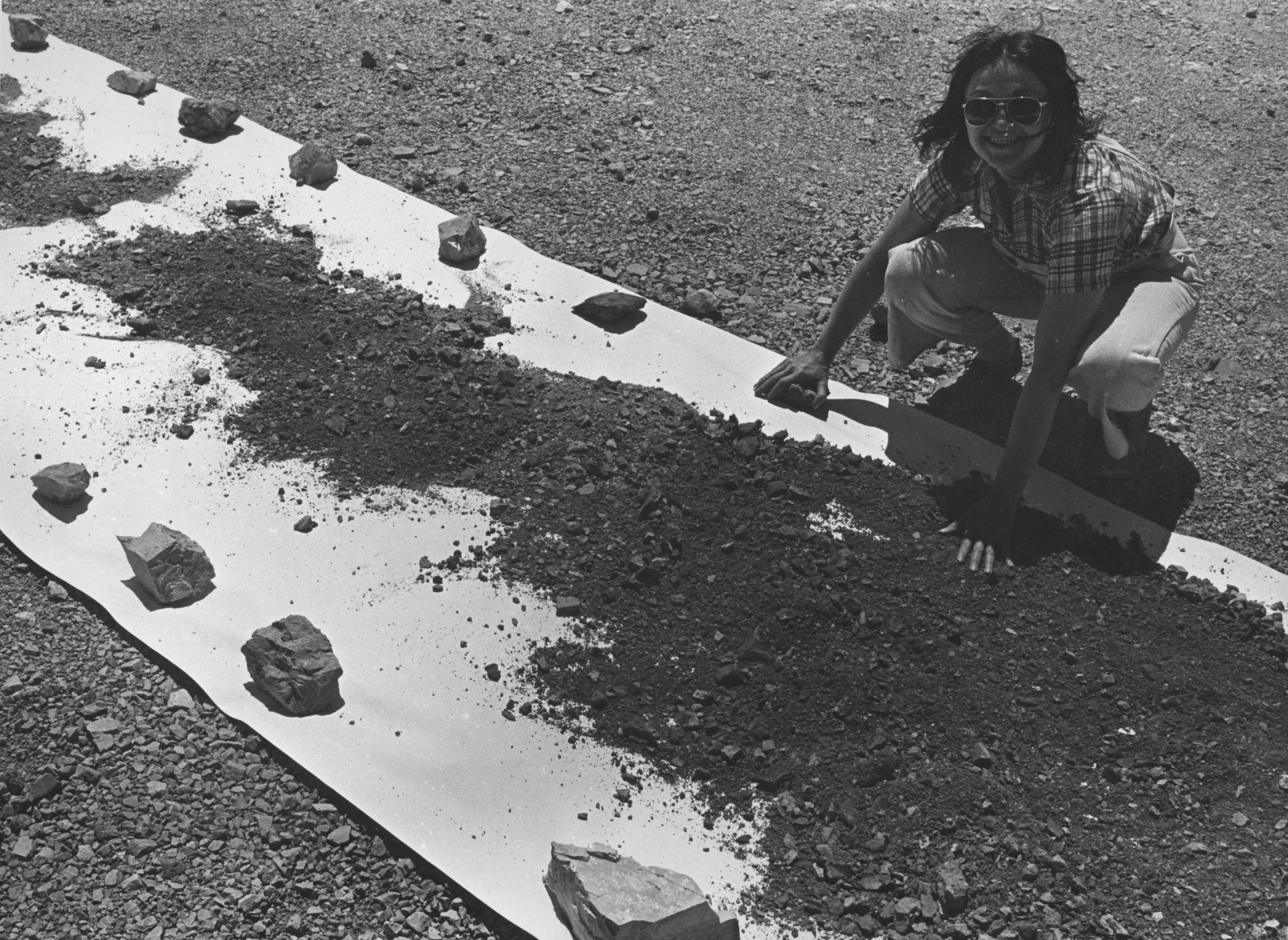 The documentary Michelle Stuart: Voyager is being developed about your work and life.

Yes, and it’s been gruelling. There were cameras all over my studio. Production was shut down during the pandemic, so I spoke to the director [Karen Bellone] on the phone every couple of weeks. But this spring a cinematographer and an entire production crew descended on my studio. It was hell.

How would you like to be remembered as an artist?

I would just like to be remembered. But I’m going to give up on being a “woman artist”. Even with these astronauts that recently went to space, people are making a big deal about a woman astronaut. Still! We’re still making these distinctions between males and females. I would just like to be remembered as a really good artist—unique, which I think the work is, and dedicated, which I always have been.