Rose Issa, curator and friend of the artist, shares the life story of one of the most important sculptors in the Arab world Adam Henein in his garden in Harraniyya, Cairo, in 2018 Courtesy of Rose Issa

The Egyptian artist Adam Henein, one of the Arab world’s most important and ground-breaking sculptors, died on 22 May in Cairo at the age of 91. Known for his use of traditional local materials, his inspiration drawn from Ancient Egypt, and an emphasis on modern forms, Henein's works combined abstraction with fine craftsmanship. He was an artist not only committed to his work but also to developing the cultural scene in Egypt: "I feel Egyptian and my work reflects that", he once said. During his long career he represented Egypt at one of the world's most illustrious art exhibitions, the Venice Biennale; spent almost a decade painstakingly restoring the country's beloved Great Sphinx; and created a museum of his own collection as a gift to the nation. Sitting in his garden with him in his later years, it was a great privilege to see him thriving there despite the chaos Cairo that was witnessing.

Born on 31 March 1929 into a Coptic Christian family of gold metalworkers originally from Asyut, his birth name was Samuel Henein. His primary education mixed Qur'anic school and Sunday church visits. In 1961, he met Afaf el Dib and converted to Islam in order to be able to marry her two years later in Aswan. From then onwards his name became Adam Henein.

He knew from a very early age the certainty of his destiny as a sculptor, from which nothing had distracted him. As a teen he loved accompanying his father to the Jewish district of Cairo, where his family had a shop, to watch the craftsmen working. The powerful experiences Henein had during a school visit to the Egyptian Antiquities Museum and subsequent revisits developed the aesthetic values that became his touchstone. Henein graduated from the Academy of Fine Arts of Cairo in 1953, but the uniqueness of his talent and take on art had already been recognised and in 1950 he exhibited at the Museum of Modern Art, Cairo. In 1954 he won the Luxor prize for sculptors and he began showing his work in foreign cultural centres in Alexandria and Cairo as well as Egyptian cultural centres in Europe—then the few available outlets for Egyptian artists—from the mid to late 1950s. Henein was able to exhibit more in Italy because of its special relationship at the time with King Farouk. Egypt remains even today the only Arab country with a permanent pavilion at the Venice Biennale, where Henein exhibited in 1960.

By the late 1950s Henein left Egypt to further his studies in Germany where he had his first European solo show in 1959 in Munich. But In the early 1960s he lived mostly between Luxor and Aswan, in search of materials that inspired and "talked" to him, which was mostly granites and other stones—the materials that built Pharaonic Egypt’s monuments and sculptures. In 1965 the foundation for Al Ahram Publications in Egypt acquired Henein's monumental granite sculpture Dynastic Bird for their new headquarters in the city: this enabled the artist to purchase a property within view of the pyramids. His architect friend Ramses Wissa Wassef helped him build a house there in 1969. The two shared a similar aesthetic belief that "one cannot separate beauty from utility, the form from the material, and the work from its function". In 2014 Wassef helped him to add a modest museum to house his collection.

A quarter of a century in Paris

Henein travelled to Paris in 1971 to participate in an exhibition of contemporary Egyptian art at Musée Galliera, with the intention to stay for one year. He didn't leave until 1996. The overwhelming mass of art that assailed him in the city forced him to reassess his work without straying from his deep roots. Over these 25 years in Paris with his wife, Henein mostly produced paintings made using natural pigments on papyrus, another material that is produced along the banks of the River Nile. He also continued to work skilfully with various materials including bronze, wood, clay, iron and slate.

In Paris, Henein met the Iraqi gallerist Waddah Faris, who had moved his gallery from Beirut to Paris and, by the 1980s, had begun representing some of the best Arab artists. During the 1980s, Henein exhibited his bronze sculptures and papyrus paintings on almost a yearly basis with Faris, who was a businessman with many connections in the Gulf. It was in this gallery in 1982 that I first discovered Henein’s work.

During the oil boom of the 1970s, when many people in the Middle East and North Africa began collecting art by both international and regional artists, galleries in Kuwait (Sultan Gallery) and Morocco (Galerie L’Atelier in Rabat) became interested in his work. The mayor of Jeddah at the time, the late Mohamed Said Farsi, was encouraging investments in art. He wanted to bring art to Jeddah's private and public areas and, as a result, Jeddah contains a large number of modern open-air sculptures and works of art. Suddenly, pieces by the Henein could be found all over Saudi Arabia: at the airport in Jeddah and at the Ministry of Foreign Affairs in Riyadh. The Saudi princess Jawaher Al-Saud became a major patron of his work. In 2005 her foundation, Al- Mansouriya, sponsored a wonderful monograph on him, published by Skira.

It was only in 1990, after Henein's exhibition with ASB Gallery in Munich (1988) and subsequently in London, that I had the chance of meeting him and his wife in his cramped studio in Paris. By then he had been put in charge of the restoration of the Great Sphinx of Giza (1989-98) by Egypt's minister of culture at the time Farouk Hosny. The garden at the Adam Henein Museum, Cairo Courtesy of Rose Issa

A triumphant return to Egypt

As Henein returned permanently to live in his birth country in 1996 some of his most important work lay ahead. Back home in in Harraniyya, Henein—who was truly never interested in the commercial success of his work—not only managed to realise a number of unique, long-envisioned, large sculptures in granite but he also helped to revive Egypt's art of stone sculpture. In 1996, with the support of Farouk Hosny, a painter who was the country's minister of culture from 1987 to 2011, Henein created an annual International Sculpture Symposium in Aswan, for which he received several awards. Henein and Hosny exhibited together at the Metropolitan Museum of Art, New York, in 1999. The show was called Contemporary Egyptian Artists and Heirs to an Ancient Tradition.

During this period, Henein met Karim Francis, a young musician and gallery owner, with whom he exhibited in 1998. Together they established Henein's foundation and museum in Harraniyya. By the late 2000s, when the Gulf had become a cultural hub for Arab art, with art fairs and auction houses building its market, Francis presented Henein’s work at Art Dubai fair. The newly opened Mathaf Museum of Modern Arab Art in Doha, Qatar, commissioned the artist to create large format works. In 2006, the only retrospective of Henein’s work to date was shown at the Amir Taz Palace, in historic Cairo. 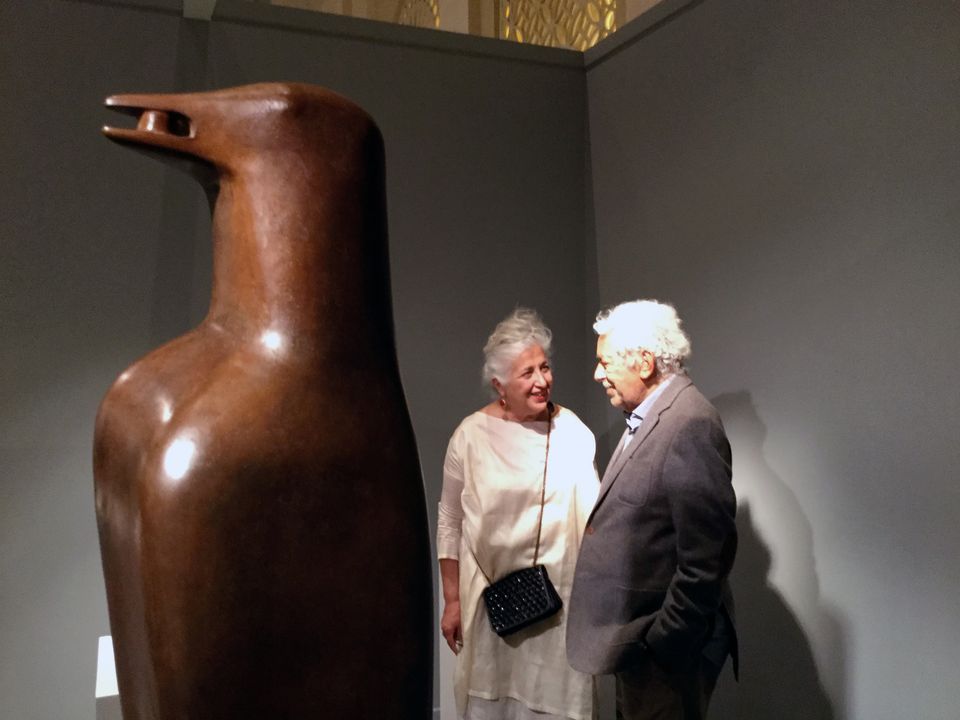 Henein "lived with and in old Egyptian art". In 2014, Henein, who had never wanted children, launched his own self-funded museum and generously gifted all his work to his country. It is one of Cairo’s hidden treasures. Students and friends came to the museum to see, linger and feel his beautiful presence, surrounded by his art, his renditions of human and animal forms. His combination of heaviness with grace; the exquisite execution of its simplicity; and the rich history of Pharaonic Egypt that the works contained were set in his beautiful garden, containing some of his best works—his "children". It was a haven of peace where sometimes Francis and Georges Kazazian, a composer and oud player, would come and perform for him.

• Rose Issa is an independent London-based curator and writer