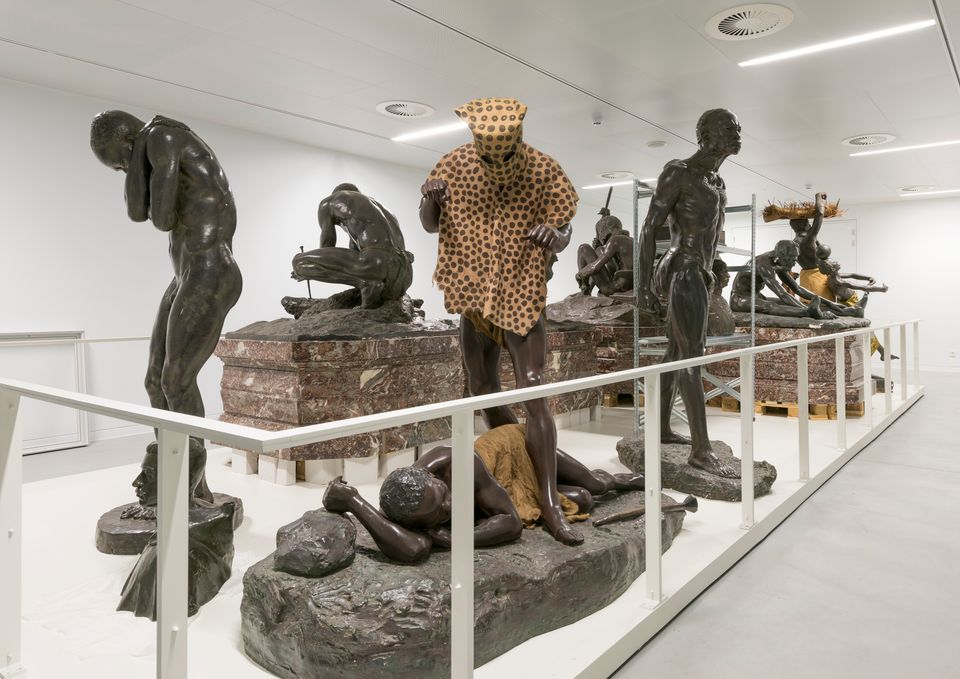 These statues are considered too overtly racist to be shown in the museum’s main galleries and are now on display in the basement © RMCA, Tervuren, photo Jo Van de Vijver

Joseph Kabila, the president of the Democratic Republic of Congo (DRC), has said that his country is preparing to lodge an official restitution request for works in the collection of the Africa Museum in Belgium.

Kabila told the Belgian newspaper Le Soir that the claim will be made in time for the inauguration next June of a new national museum currently under construction in Kinshasa with funding from South Korea. His comments were published the day before the public reopening on 8 December of the newly revamped Africa Museum in Tervuren, outside Brussels, following a five-year, €74m revamp.

The director of the Africa Museum, Guido Gryseels, said he is open to such requests and that he supports the renewed discussion in Europe about the fate of collections assembled in the colonial era. This follows the release in November of a report commissioned by the French President Emmanuel Macron into the status of African objects in French national collections; it concludes that works which were taken “without consent” from former African colonies should be returned.

“I fully agree with President Macron that it is not normal that 80% of African art is in Europe. We are open to constructive dialogue. We are willing to consider requests for restitution,” Gryseels said at the press preview of the Africa Museum’s reopening.

A new glass-fronted pavilion now welcomes visitors to the museum. This leads via an underground passage to the main museum building which has been completely overhauled in an attempt to present a “decolonised vision of Africa” Gryseels explained. But how do you decolonise a museum that was created to celebrate one of the most brutal colonial regimes in history?

King Leopold II established a personal fiefdom in what is today the DRC in 1885. His 23-year regime included the violent subjugation of the Congolese population through practices such as the cutting off of the hands of men, women and children. Millions are believed to have died. In 1908, following widespread criticism of the king’s reign, the Belgian government took over administration of the colony.

Despite the violence and torture, back home King Leopold II was keen to present his African venture as a benevolent enterprise. He built the Africa Museum, then called the Musée du Congo, as a “propaganda machine to convince people that his venture in Congo was a good thing,” says Bruno Verbergt, the operational director of public services at the Africa Museum. It moved to its current building, an elegant neo-classical structure, in 1910.

One of the first tasks of the new museum's administration was to remove statues which are overtly racist. These were taken from the museum’s main galleries and relegated to a basement room where they are still publicly accessible. Amid these depictions of naked Africans, including one statue which shows a man and a woman being taken into slavery, there are heroic busts of King Leopold, also now judged to be unacceptable for display in the building’s main halls.

Meanwhile in the museum’s main rotunda upstairs, curators were unable to remove the huge gilded statues that decorate the grand space and represent the Belgians’ civilising effect on Africans. One is entitled Belgium Brings Civilisation to Congo, another Belgium Brings Well-being to Congo. “We could not remove these because the building is listed,” Verbergt says. “Nor did we want to. I think it’s important we keep these here because this is also a museum about colonisation.”

Instead, curators have placed a large wood and bronze head by the Congolese sculptor Aimé Mpane in the rotunda, one of several contemporary works by African or diaspora artists now dotted throughout the museum. Labels have been rewritten throughout the displays to include information about the circumstances of objects’ removal from Africa, where this is available. In the Rituals and Ceremonies Galleries, for example, we are told that two wooden statuettes “were stolen during the violent expedition of Lieutenant Emile Storms against Chief Kansabala. Storms had been given the order to subdue African leaders to keep the region under control”. “These will be among the first works to be returned to Africa,” a museum official told The Art Newspaper. 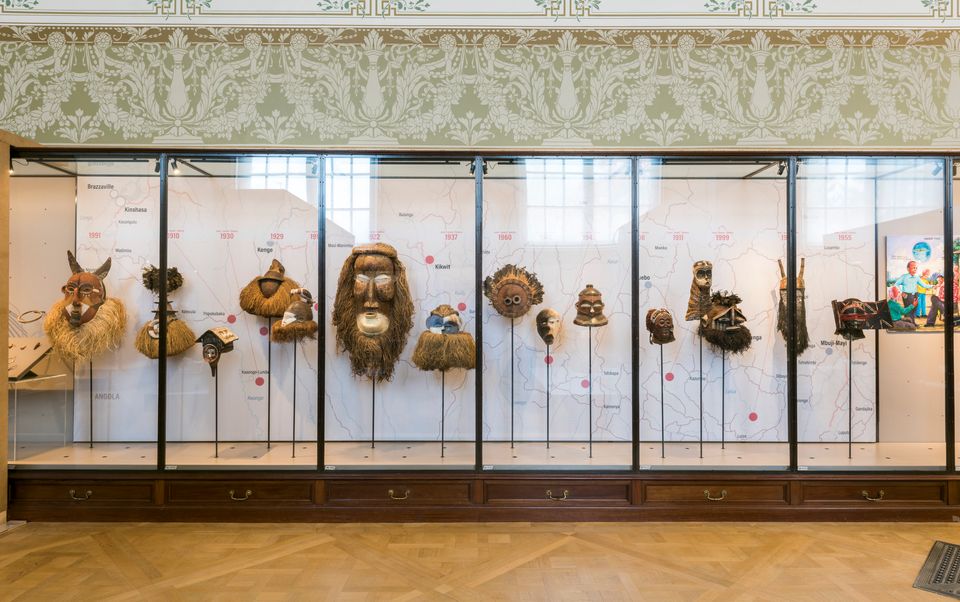 Nearby, another wall text informs us that “many objects that were originally put on graves or served to commemorate a community’s ancestors were collected without the proper consent of related family members, or in circumstances where families could not express themselves freely. [We] regret any act of desecration that was carried out directly or indirectly in [our] name and wish to apologise for this.”

Perhaps the most contentious space in the museum is the Gallery of Colonial History. “We are taking a much more critical view of our history here; we condemn colonialism as a system of government and we take responsibility for our past,” Verbergt says. But there are some glaring omissions such as the failure to detail the brutal reality of Leopold’s regime which is, at best, alluded to. When The Art Newspaper visited, there were no references in any of the displays or wall texts, for example, to his terrible practice of cutting off the hands of the Congolese. The museum says multimedia presentations will deal explicitly with this practice but it seems a missed opportunity not to include this information in the gallery’s texts. Afterall, not everyone is going to sit through a video. 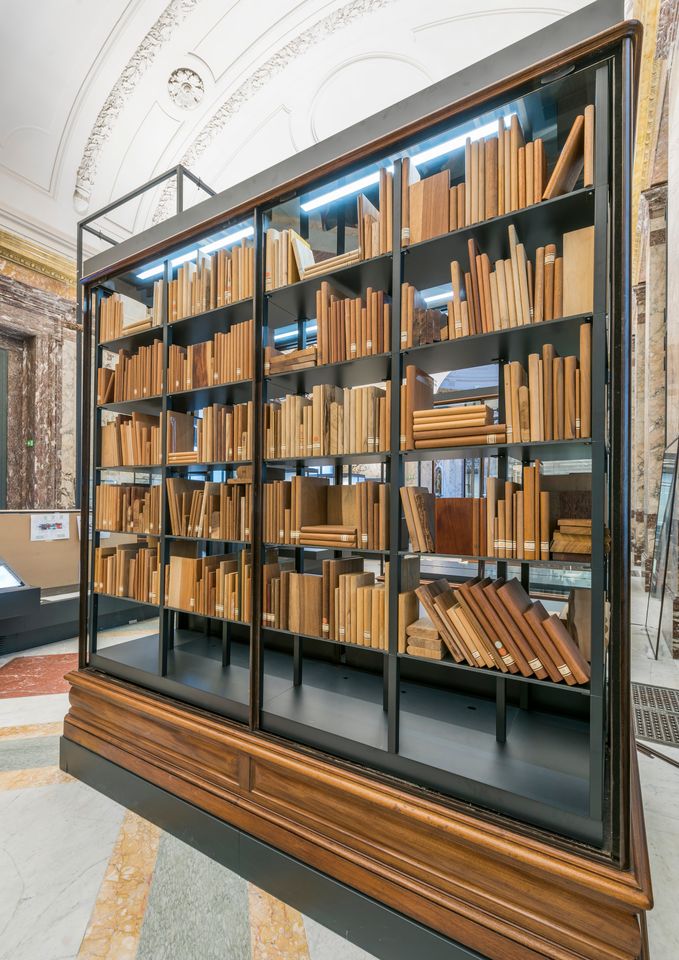 Elsewhere, the museum appears shockingly disingenuous. In a gallery entitled The Resource Paradox, specialists ask why the DRC, which has vast mineral wealth and is the world’s largest exporter of cobalt, is still so poor without considering the part that colonialism has played in the country’s development. Texts refer to the “political instability on the continent which is partly explained and maintained by the power dynamics in a globalised world. More sustainability would certainly improve the region’s welfare”. This may be true but critics of the Africa Museum and its revamp might well ask what the €74m spent on the project could have built in the DRC.

This article was amended on 17 December. A sentence referring to the museum’s failure to mention in its labels that Chief Kansabala and his wife were executed during a raid by Belgian soldiers was removed. Hein Vanhee, a historian on staff at the Africa Museum, pointed out that: “Chief Kansabala and his wife were able to flee when Lieutenant Storms troops were approaching. Shortly before this, however, the related Chief Lusinga had been killed by Storms troops. He was decapitated and his head was taken to Brussels as a study object (for the physical anthropologists whose discipline had not yet been discredited). All this is described by the UCLA professor Allen Roberts in his book A Dance of Assassins. Performing Early Colonial Hegemony in the Congo (Bloomington: Indiana University Press, 2013).”

This article was updated on 10 December to include the reference to the museum's multimedia installations.