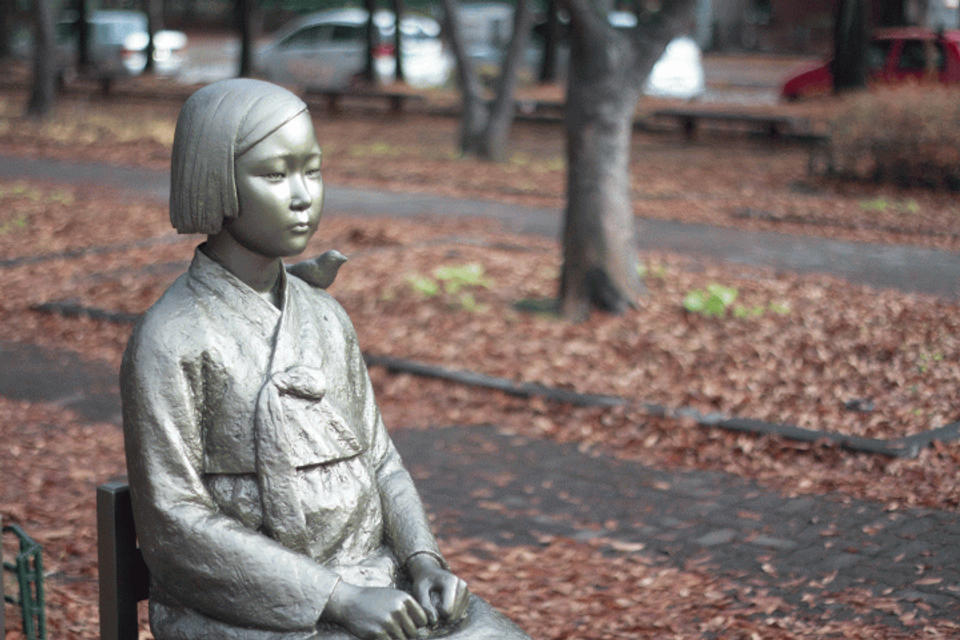 More than 70 artists participating in the Aichi Triennale in central Japan (Taming Y/Our Passion, until 14 October) have signed a statement demanding that an exhibition dedicated to freedom of speech re-opens after appropriate security measures are put in place.

A section of the triennial, entitled After ‘Freedom of Expression’?, was closed last weekend when organisers were threatened with violence after showing a statue by the Korean sculptors Kim Seo-kyung and Kim Eun-sung, entitled Statue of a Girl of Peace (2011). The work represents a “comfort woman” or ianfu, the term for Korean women forced to work in Japanese brothels during the Second World War.

The mayor of Nagoya (Aichi’s prefectural capital), Takashi Kawamura, also stoked the row, saying that “[the sculpture] tramples on Japanese people’s feelings. We will conduct an investigation as fast as we can to explain to people how the work came to be exhibited”, adding that “freedom of expression has a certain limit”. Kawamura declined to comment further.

The exhibition section, which included works that had been censored in Japanese museums, subsequently closed after only three days. Seventy-two artists, including Tania Bruguera and Miriam Cahn, have since signed a statement posted online. “It is a fact that the exhibition received hundreds of intimidating phone calls after the opening of the triennial, as well as a fax warning of an attack on the venue using gasoline and fire, recalling the 18 July arson attack on an animation studio in Kyoto that has claimed at least 35 lives to date,” the statement says.

The signatories believe that all precautions must be taken to ensure the mental and physical safety of the exhibition staff and visitors. The show should then continue “under the assurance of safety for all its staff and visitors”, they say adding two other conditions: “The immediate restoration of the Aichi Triennale 2019’s autonomy from political pressure and intimidation [and] the establishment of a platform for free and vigorous discussion that is open to all, including the participating artists.”

Participating artists have also posted their own comments on the controversy. Singapore-born Song-Ming Ang, who is showing the performance piece A Song to Change the World (2018), says on Facebook: “Instead of bowing to political pressure and terrorist threats, I urge the authorities to quickly find the perpetrators of such a base form of intimidation, and create a safe space for the public in which art can be viewed. Censorship is a lazy, unethical quick-fix that does the public a double disservice, depriving people of the art on display and the related historical issues that need to be confronted.”

The South African artist Candice Breitz, who is showing the video installation Love Story (2016) at the triennial, tells The Art Newspaper that while she agrees with “Song-Ming on what the ideal scenario would be—he sums it up 100%—it is necessary to acknowledge that the [artistic] director Daisuke Tsuda was faced with very real threats to public safety."

The row continues to resonate. Kim Seo-kyung told the New York Times it was disappointing that the exhibition had closed. “I think most people, especially women, found the pain of war in the statue,” Kim said. Meanwhile, according to the Japan Times, the governor of Aichi prefecture and the head of the triennial organising committee, Hideaki Omura, heavily criticised Takashi Kawamura, saying that the mayor’s comments are “unconstitutional”.

In a statement released 2 August, Tsuda says that he explained the significance of the exhibition to relevant departments in the Aichi Prefectural Government, both at its office and at the Triennale's site. "If the government were to have a say in all aspects of the event, with the power to veto any content with which it did not agree, this would create a different issue: namely, censorship, which is prohibited in Article 21 of the Constitution of Japan," he adds.

UPDATE (12 AUGUST): A press statement issued by the triennial press office says: "We are treating the artists' statement delivered by the triennale's participating artists as an independent action on the part of the signatories, calling for solidarity amongst their fellow artists. The Aichi Triennale Organising Committee will continue to make [its] best efforts to ensure a safe environment for our visitors and staff, and to remain in communication with the participating artists as we seek a resolution for this situation. We are looking into possibilities for establishing a platform that will allow free and comprehensive discussions with the artists."