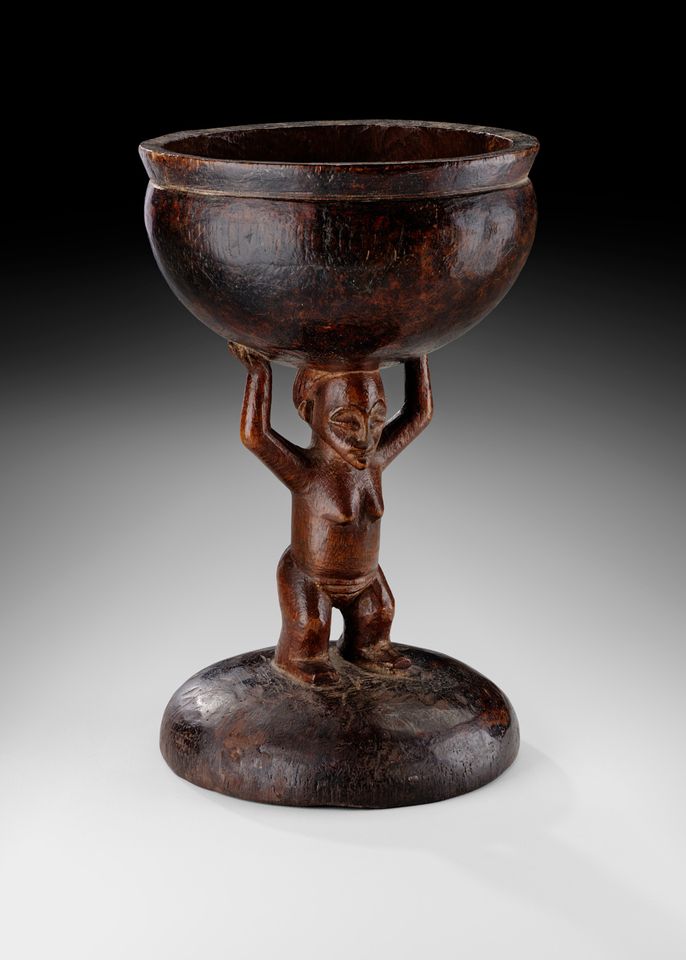 A decorative bowl mounted on a carving of a woman, one of the six works returned to the Angolan government courtesy of the Sindika Dokolo Foundation

The Angolan government will today (7 June) recover six artefacts that were looted from the Dundo Museum in the northeast during the civil war that ravaged the country for 27 years and ended in 2002.

The stolen artefacts were trafficked abroad and entered the international art market. They were recovered by the Sindika Dokolo Foundation, set up by a Congolese businessman and collector of African art. In 2015, the foundation announced a project to locate and recover more than 100 works that had gone missing from the Dundo Museum.

The six objects to be returned to Angola at an event in Brussels include a wooden pipe decorated with a human head, a decorative bowl mounted on a carving of a woman, and a mask made of wood and metal. They were all found in private collections, Sindika Dokolo says. The foundation’s researchers have identified around 60 of pieces missing from the Dundo Museum and around 16 have been returned so far, he says.

Dokolo is also seeking to raise domestic awareness about the importance of Angolan heritage. “A lot of Africans don’t realise this is art, not anthropology, or that it is collectible, or that something produced 100 years ago is not the same as something produced now,” he says. “We are trying to create a system that will raise awareness both inside and outside Angola.”

Dokolo’s foundation plans to launch a database in the coming weeks, giving details of all the missing artefacts that have been identified, with images where possible. “This will help people to identify pieces and realise their work is stolen,” he says. “They will also see that because it is so well documented, it’s not saleable. Sometimes you have to corner the market via money.”

In most cases, Dokolo reimburses the current owner for the amount that was paid at purchase, he says. But a chair that his foundation recovered was returned by a French collector, the sculptor Daniel Hourdé, who refused payment and said he was just happy to know it would go back to the museum, Dokolo says. “I was very touched by the grace of his reaction,” he says.

The Dundo Museum was founded in 1936 by Diamang, the Angolan diamond company. It grew from the personal collection of José Redinha, an administrative officer. In the late 1940s, Diamang began adding to the collection by purchasing works on the European market.

One of the works to be returned today, a mask worn by young men for initiation rites, was uncovered in Dokolo’s own collection, he says. As one of his foundation’s researchers was showing him her progress in identifying the mask, he realised it was a piece he had purchased at auction more than ten years ago.

“It’s in my backpack on the way to Brussels right now,” he told us from Heathrow airport before his flight.