The Scythian tomb contained four women buried with all their regalia and weapons, including a gold headdress, spears and riding equipment 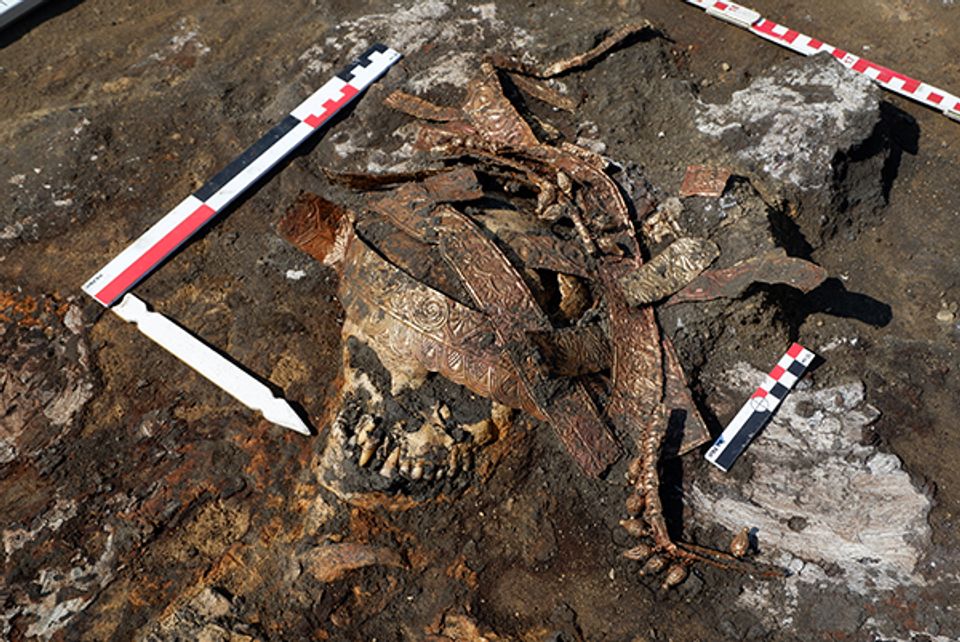 An archaeological expedition in Southern Russia, led by Valerii Guliaev with the Institute of Archeology of the Russian Academy of Scientists, unearthed a 2,500-year-old tomb in late December which contained the remains of four women warriors from a nomadic tribe known as the Scythians. Members of this tribe are believed to be the real life inspiration for the Amazons of ancient mythology. "The Amazons are common Scythian phenomenon,” Guliaev says in a statement, adding that during the last decade his expedition has discovered around 11 burials of young armed women in the Middle Dom region of Southern Russia. “Separate barrows were filled for them and all burial rites which were usually made for men were done for them.”

More than 30 iron arrowheads were found in the burial pit, along with an iron hook forged in the shape of a bird, horse riding equipment, iron knives, and fragments of handmade vessels. The eldest warrior, aged 45 to 50 years old when she died, was buried with an iron dagger, an arrowhead, and an engraved, gold headdress known as a calathos.

“Earlier similar headdresses were found in known rich barrows of Scythia,” Guliaev told the science paper EurekAlert. “However, only a few were discovered by archaeologists. They were more often found by the peasants, they were taken by the police, landowners and the finds had been through many hands when they came to the specialists. That is why it is not known how well they have been preserved. Here we can be certain that the find has been well preserved." Guliaev stressed the rarity of such an ornament being found “in situ on the location on the skull”.

Another skeleton was buried in a "position of a horseman," with a bronze mirror and two spears beside her. She was also wearing a bracelet made from glass beads.

Economic reports reveal drastic loss of arts jobs in the US

Economic reports reveal drastic loss of arts jobs in the US