The Spanish art fair, which usually takes place in February, has braved the Madrid heat with this year’s postponed edition 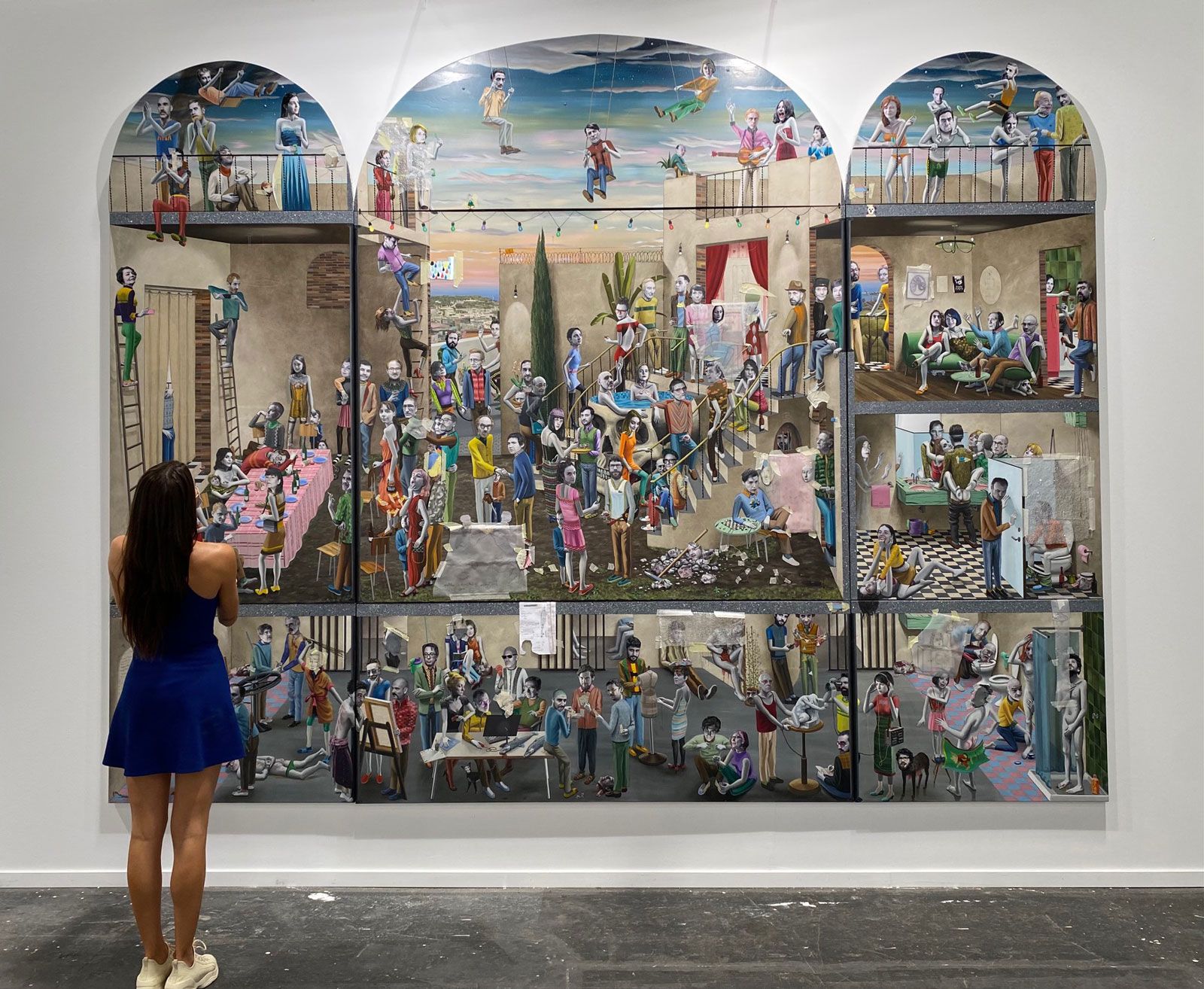 The organisers of Arco Madrid (until 11 July) and participating dealers put on a brave face as its 40th edition opened yesterday at the Feria de Madrid complex, exceptionally taking place in July rather than in February. “We didn’t want to step on anybody’s toes so we invented a date in July,” says the Arco Madrid director Maribel López, referring to why July was chosen for the postponed fair over autumn when major fairs like Art Basel and Frieze London are due to take place. “We waited and waited and waited, and in April we decided to go ahead [with the July date].”

The number of exhibitors has decreased from 209 to 130 and the floor plan is similarly reduced by a third. Latin American galleries have been unable to attend due to pandemic travel restrictions (a group show curated by Mariano Mayer spotlights the region’s artists) while several international galleries, such as Hauser & Wirth, have pulled out.

“I was mostly afraid of the heat” Gonzalo Alarcón, director of Galerie Thomas Schulte

Exhibitors have been offered a 30% discount in the main section and a 15% discount for solo presentations. To control visitor numbers, today and tomorrow have been reserved for professional visitors.

Arco had been planning a 40th anniversary show but has postponed this until next year when longstanding exhibitors, such as Turin’s Giorgio Persano and Frankfurt’s Galerie Bärbel Grässlin who could not come this year, will be back. “You cannot celebrate your birthday without your best friends,” Lopez says. She adds that this year required flexibility from all sides and that 250 international visitors, down from 300, have been invited.

Galleries have praised Lopez’s “courageous decision” to hold the fair. “This is an heroic edition of Arco,” says the Madrid dealer Juana de Aizpuru, who sold works by Cristina Iglesias and Heimo Zobernig on the opening day. “Art is necessary at the moment because a lot of people have been depressed during the pandemic and, with precautions, we can do something that’s almost normal. We’re like a big international family that loves art.” Niklas Svennung, the director at Galerie Chantal Crousel, whose early sales included works by Mimosa Echard and David Douard, was similarly enthusiastic. “We’re very happy to be back. Arco was the first fair we did before the pandemic and the first fair since then,” Svennung says, referring to last edition in February 2020 when Covid-19 was just beginning to have an impact in Spain.

Although galleries were unanimously supportive of Arco, several mentioned that July is not ideal. “July isn’t the best moment because many people in Madrid have gone to the countryside, but I’ve seen more people than I expected,” says Clemente Cayón, the director of Galería Cayón, which is presenting a kinetic painting by Jesús Rafael Soto, priced at €1.3m.

Gonzalo Alarcón, the director of Galerie Thomas Schulte, who sold a Rebecca Horn sculpture priced at €160,000, had another concern. “I was mostly afraid of the heat,” he says, laughing. The Spanish capital can get unbearably hot in July and August, and those who can tend to leave the city in the summer (although this week has been cooler than usual). 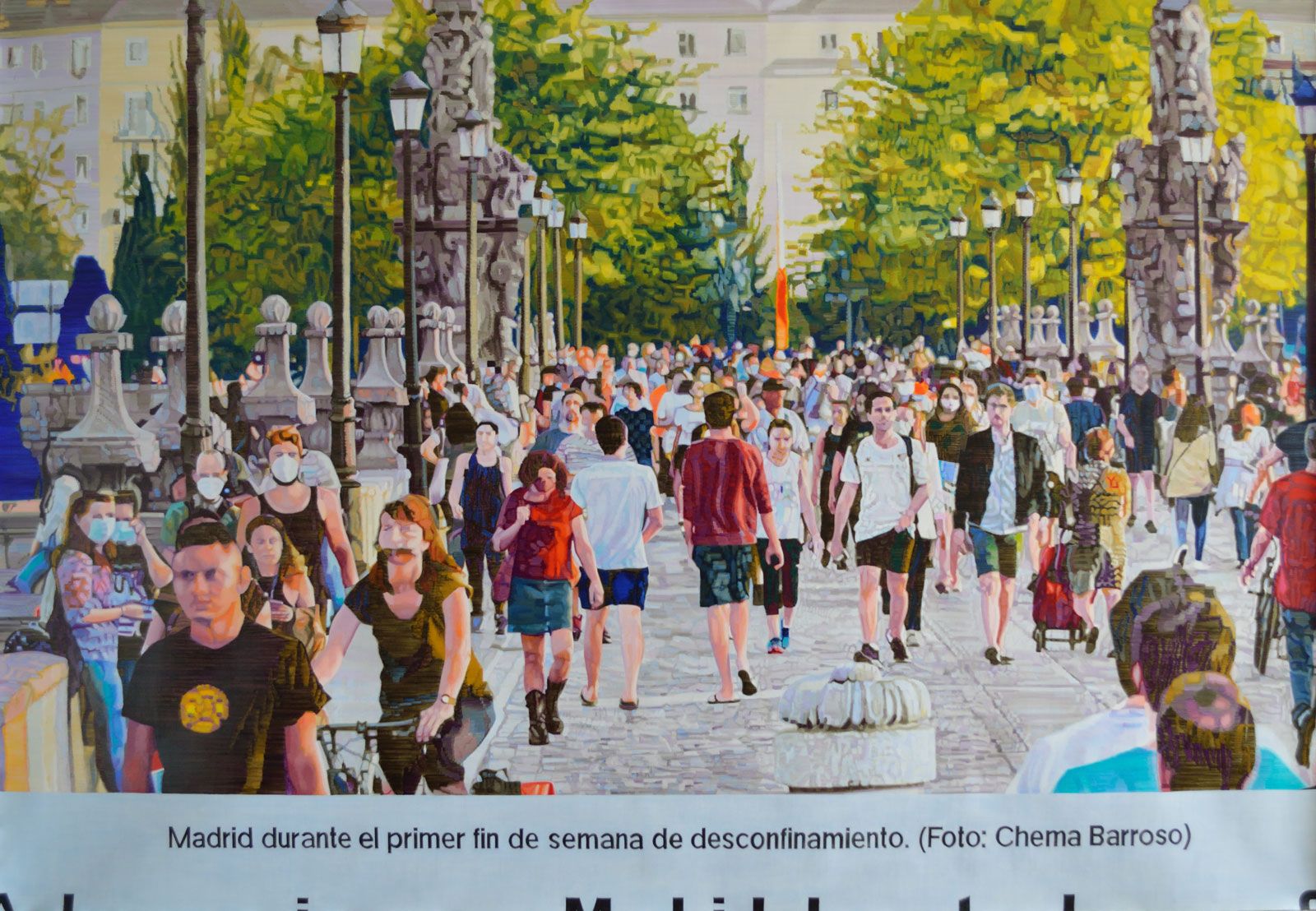 Detail of Simeón Saiz Ruiz's Madrid during the first weekend [...] (2021) Courtesy of the artist and F2 Galeria

As the art community wakes up again to a big fair, the pace is slightly different with visitors more inclined to take a leisurely stroll round and have time to digest and ask questions. “Our feeling is that collectors want to have a glimpse of the whole fair, enjoy it and have a conversation,” says the Madrid dealer Sabrina Amrani, who has seen curators from the Centre Pompidou, Tate Modern and Cologne’s Ludwig Museum. “Spanish and Latin American artists are the ones that people are asking about. For collectors, it’s a bit like returning to the old model—you visit Madrid if you want to see Spanish artists.”

Inevitably, some works reflect on the pandemic, such as Simeón Saiz Ruiz’s painting, Madrid during the first weekend after lockdown based on a photograph by Chema Barroso published in the online newspaper Madridiario.es (2021), which is on sale for €32,000 at F2 Galería. Meanwhile, Beth Moysés’s Sewing Workshop installation at Galería Fernando Pradilla, includes a performance titled A Thousand Ties, which involves an elderly woman embroidering onto fabric the initials of Spanish women who suffered domestic violence at the hands of their partners during the pandemic. It is one of 26 solo presentations of women artists. Beth Moysés's A Thousand Ties (2021) Courtesy of the artist and Fernando Pradilla, Madrid

Also creating a buzz is Gino Rubert’s To be titled (2021), an unfinished painting priced at €87,000, at Barcelona’s Galeria Senda. Incredibly detailed and satirical, it depicts artists past and present: Pablo Picasso, Salvador Dalí and Antoni Gaudí are rocking on swings; Marcel Duchamp sits on Antoni Tàpies’s shoulders; while the Japanese mural artist Mina Hamada stands at a table and Rubert is at his easel.

The Museu Nacional d'Art de Catalunya (MNAC) in Barcelona, had seen Rubert’s previous triptych and wished to exhibit it in its Gothic section; Rubert responded by creating this new work that should go on display instead. “The artist saw MNAC’s interest as an opportunity to do something like a Who’s Who of the art scene in Barcelona; it has an acidic, British sense of humour and people say that it reminds them of Hieronymus Bosch’s painting, The Garden of Earthly Delights [1490-1500 at the Museo del Prado],” says Carlos Durán, the director of Galeria Senda.

Although visitors do not require a vaccine passport or negative test to enter the fair, a Covid-19 testing room has been set up above one of the halls for international visitors and exhibitors who may be required to provide a negative test at airports in order to return to their own countries. A PCR test costs €98 and an Antigens test costs €45.