Wedged between Art Cologne, Art Brussels and Frieze New York, and overlapping with Art Monte Carlo, Gallery Weekend Berlin (GWB, until 29 April) manages to distinguish itself by turning the German capital into an art festival. Across Berlin, 47 galleries coordinate their exhibition openings over the course of the three-day event, while numerous museums, fashion brands and fringe events get in on the act. GWB, now in its 14th edition, is expected to attract around 30,000 visitors by the end of the weekend; 2,000 VIPs were invited to the opening.

Building on the popularity of GWB, The New York Times hosted its annual Art Leaders Network conference in Berlin for the first time (25 and 26 April), with art world luminaries such as Sheikha Al Mayassa, MoMA director Glenn Lowry, and the artists Ai Weiwei and Olafur Elisasson among its stellar lineup of panelists. The German culture minister Monika Grütters gave a speech at the conference’s gala dinner on 25 April.

Meanwhile, auction house giants also joined the GWB bonanza. Over at the Czech embassy, Christie’s is hosting a four-day exhibition on German art titled Beauties and Beasts: Making and Collecting Art in Germany (until 29 April), which includes works by Old Masters from Cranach and Dürer to contemporary names such as Gerhard Richter and Martin Kippenberger. Around a tenth of the works will be coming up for auction this year.

The timing of the show's opening reception, which overlapped with GWB's, raised eyebrows. Maike Cruse, the director of GWB, said that: “As with Art Basel, there should be a certain respect for the main event, and such clashes should be avoided.” The auction house's marketing power, however, is sure to have attracted the kind of high-caliber collectors that Berlin still lacks. Whether all of this activity will translate into sales remains to be seen. In 2014, the local gallery scene was hit by a VAT rise from 7% to 19%. The increase, compounded by a 4% artist insurance tax, stringent new export laws, and rapidly rising rents, has put pressure on smaller and mid-size galleries. “At the moment, the German art market is not internationally competitive,” the dealer Johann König told the Tagesspiegel. “It cannot be the case that it is cheaper for a German collector to buy a work from my competitor in New York than with me!”—a particularly sensitive point as collectors start packing their bags for Frieze New York. The Association of Berlin Galleries estimates that over the past few years, the number of galleries in Berlin has dropped from around 400 to 300. Despite the gloomy statistics, two new spaces opened during GWB. Konrad Fischer Galerie gave a sneak peek of its new venue on Neue Grün Straße—an early 20th-century gem by the architect Hans Heinrich Müller. The building will be converted later this year by the German architects Heide & Von Beckerath. Its “pre-opening”, which could only be attended by 20 people at a time, featured a sprawling show of works by Manfred Pernice, Lawrence Weiner and Carl Andre. The US artist also inaugurated the gallery's spaces in Düsseldorf in 1967 and Berlin in 2007. Konrad Fischer’s main space in Lindenstraße is devoted to a solo of Stanley Brouwn (until 16 June). Another new art space, PS120, opened this week on Potsdamerstraße, Berlin’s latest blossoming gallery district. An alternative to the traditional model, PS120 displays loans or works consigned by galleries, for which it takes a 10%-30% consulting fee depending on the size of the gallery. Artists in the inaugural show titled The Way Things Run. Part 1: Loose Ends Don’t Tie (until 27 May), include Alvaro Barrington, Tom Burr, Joan Jonas and Rosemarie Trockel. “I would not have a space anywhere else,” says Justin Polera, PS120's founder. “Berlin is a city on the rise, it’s like New York in the 1990s, with tons of experimentation. It’s so much safer for artists to experiment here, without taking huge financial risks like in New York. Even if gentrification is seen as an evil, it’s a really exciting moment to see the city transformed, and Potsdamerstraße is at the center of this shift. ” The most essential pull of GWB is of course the city itself and galleries are taking full advantage of their vast industrial spaces to show large-scale works and major installations this week. At first-time GWB participant Alexander Levy, the German artist Julius von Bismarck has converted the entire floor of the gallery into a treadmill (until 9 June). Meanwhile, 20 trees suspended from the ceiling fill the nave of König Galerie's space in the St Agnes church for the Swiss artist Claudie Comte's show titled When Dinosaurs ruled the Earth (until 24 June). Esther Schipper is presenting a museum-quality survey of five-decades of work by General Idea and AA Bronson (Catch me if you can! AA Bronson + General Idea, 1968–2018, until 26 May), which is complimented by a five-day installation of Bronson's mystical performances at the KW Institute of Contemporary Art (until 29 April). 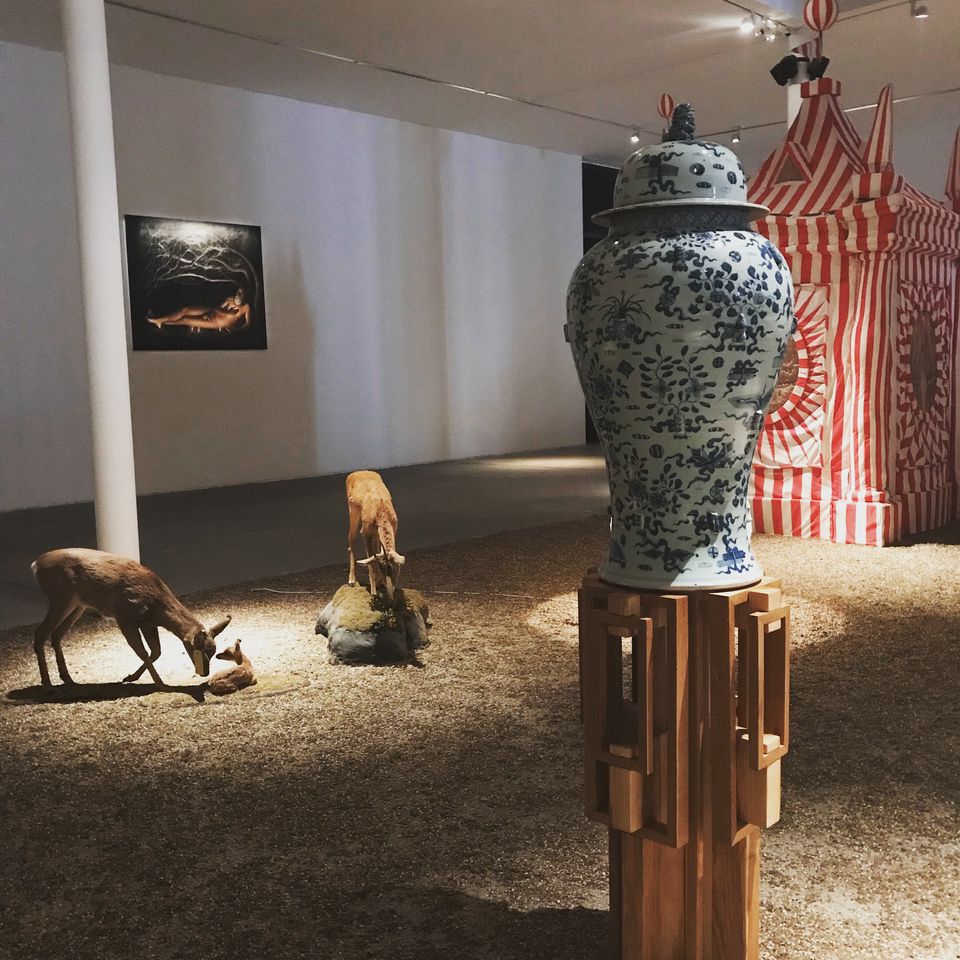 Among the biggest highlights of GWB are several video works, which, in the large, cavernous expanses of Berlin galleries, have the space and acoustic capacity to reach their full potential. Kara Walker’s 17min-video Fall Frum Grace, Miss Pipi’s Blue Tale (2011) at Sprüth Magers tells the story of a sexual relationship between Miss Pipi, a “southern belle” and a black man. When their dalliance is uncovered, the man is brutally beaten by a group of white men and castrated. This harrowing tale is told through Walker’s signature silhouetted figures, which are at once devoid of individuality yet profoundly affecting at the same time. Another form of segregation is addressed in a new film by the Cuban artist collective Los Carpinteros at KOW. Comodato (2018) takes the viewer on a journey through an imaginary house decorated in lavish furnishings that gradually become more and more humble. The piece undermines the notion that Communist-governed Cuba is devoid of a class system. 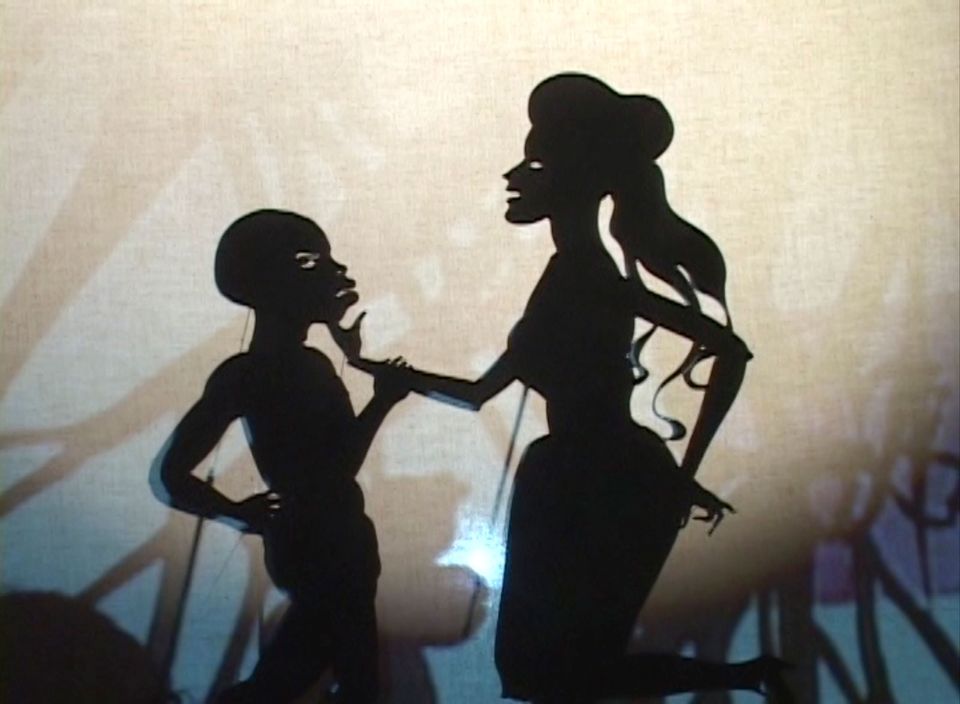 Off the beaten GWB track, Kahil Joseph’s magnificent 20-minute film Fly Paper makes its European debut at Soho House Berlin where Store X has launched its new exhibition space. Much like Arthur Jafa's works, the film celebrates black culture in America through a heart-thumping soundtrack and breathtaking visuals (until 8 July). The undisputed star of the week, however, is the Ngorongoro II exhibition in the Weißensee neighbourhood on the outer edges of Berlin. Sprawled across a 6,000 sq. m artist studio complex, the non-commercial show was created by the artist Jonas Burgert alongside six of his peers. With huge queues snaking around the buildings, the show attracted more than 5,000 people on its opening day. Works by 160 artists artists—including John Bock, Marlene Dumas, Ida Ekblad, Katharina Grosse, Polly Morgan Anri Sala, Marilyn Minter and Bill Viola—are exhibited on the vast grounds (which include a pool) without labels or explanation. “We want people to look at the work first, not the name of the artist,” Burgert says. Titled after a highly fertile crater in Tanzania, the exhibition became an instant success when it launched in 2015, attracting 15,000 people in four days. To cover the expenses of the show, the seven artist-organisers have created a portfolio of prints priced at €2,000 each (edition of 100). Burgert says 80 editions have already been sold, which he hopes will allow the event to break even this year. In Berlin, Burgert is represented by the London-and-Berlin gallery Blain Southern, which is participating in GWB with a new series of photographs by the East German artist Frank Thiel, depicting young Cuban Quinceañeras, a name given to young Latina women when they celebrate their 15th birthday. Other new initiatives include a temporary exhibition and production platform called No Place. Four galleries—Nueveochenta (Colombia), Arróniz (Mexico), Michael Sturm (Germany) and Nf/Nieves Fernández (Spain)—are exhibiting works by nine international artists in an abandoned Wilhelminian-style residential building in Mitte (until 12 May). The roaming event first launched in Lima “with great energy and unexpected collaborations between artists” and will take place in a different city each year. “It is a much more economical format than an art fair, and gives artists an opportunity to be more ambitious and take more risks.” The exhibition includes several new commissions as well as pre-made works such as an installation by the artist Moris, which deals with the recent earthquake in Mexico City. The dealer Nerea Fernández says: “So many conversations about art treat it as a luxury commodity instead of a tool for social change and this turns a lot of people away from art." 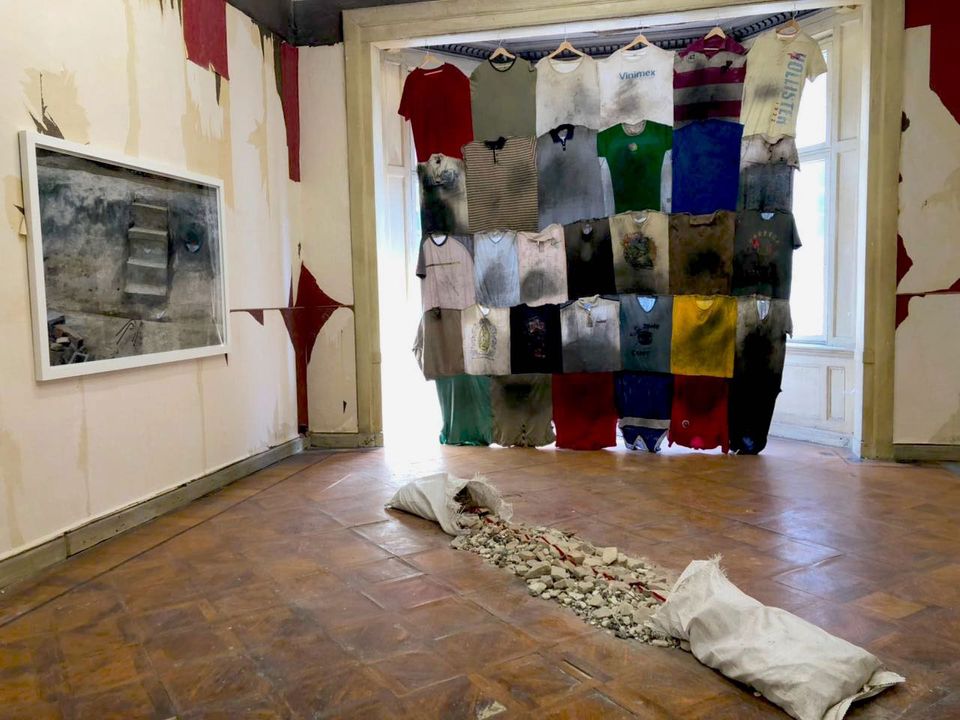