Nikolay Polissky's act took place at Nikola-Lenivets event, which is likened to the US Burning Man festival 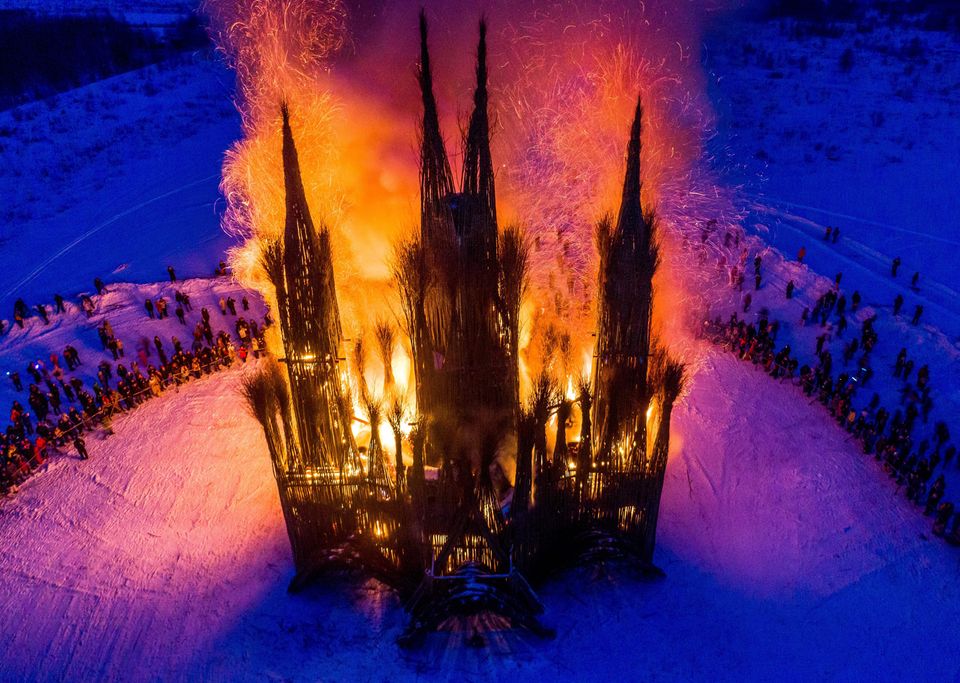 A 30m-tall Gothic structure built of branches and twigs, thought by many to resemble a cathedral, was set alight on Saturday (17 February) causing controversy in Russia. The burning took place at Nikola-Lenivets, a rural artists’ colony 200km south of Moscow, and was the culmination of pre-Lenten carnival festivities known as Maslenitsa. The event is often likened to the US Burning Man festival.

Nikolay Polissky, a founder of Nikola-Lenivets whose monumental land art has turned the Kaluga region settlement into a hipster tourist draw, creates a different installation to burn at the carnival each year. In Russian folk tradition, Maslenitsa ends with the burning of a scarecrow. This year’s festival was titled Flaming Gothic, the literal Russian translationof the flamboyant style of architecture.

Commentators from both the right and left fumed once the gripping images and video went viral. Some said it was an attack on Christianity, including Russian Orthodoxy. Yesterday Orthodox Christians celebrated Forgiveness Sunday, but the day was marred after five women were killed by a gunman at a church in Dagestan (Islamic State claimed responsibility for the attack).

Others warned that the flaming installation is a Russian nationalist statement that plays into Kremlin propaganda and comparable in its destructive visual beauty work by Leni Riefenstahl, the Nazi propaganda film-maker behind Triumph of the Will (1935).

The Russian journalist Andrey Malgin wrote in Facebook post: “In a fascist state it is possible to organise magnificent artistic events with great meaning. And they always took place. Grandiose torchlight processions […] Triumph of the Will... In a country where people are imprisoned for dancing in an Orthodox church and for catching Pokemons there as well, incinerating a Gothic (and that means Catholic) cathedral—is not the same as doing the same thing in a country that does not have a triumphant Orthodox Taliban.”

Commentators were exasperated by both points of view, saying that they highlighted a woeful lack of knowledge of art history, contemporary art and cultural theory, in particular Mikhail Bakhtin’s theory of carnival.

As attacks against the spectacle gained momentum, Polissky took to Facebook to explain and apologise: “There was nothing of religious worship in my art object, of course there were no crosses, altar or any religious symbols. This is not a copy of any existing structure of religious worship nor an imitation of a church. It is simply a bonfire built in the style of a Gothic building.”

Polissky said he hopes for “dialogue with representatives of the Catholic and Orthodox churches”. And if they find “anything sacrilegious” in his work he is ready “to relegate this project into oblivion to the extent that this is possible in the modern world”. He emphasised that “for me, inciting hatred or insulting faith are a taboo and unacceptable theme for creativity”. He concluded with: “Today is Forgiveness Sunday and I ask all Orthodox and non-Orthodox Christians to forgive me for Christ’s sake.”

Late last year another artist, the photographer Danila Tkachenko, was the focus of heated attacks for allegedly torching abandoned rural houses as part of a photo installation. Police are still investigating his actions.

On 19 February, the date the structure was set alight was corrected to Saturday 17 February. And on 20 February, the headline and first line were changed to describe it as a Gothic "structure" rather than "cathedral"