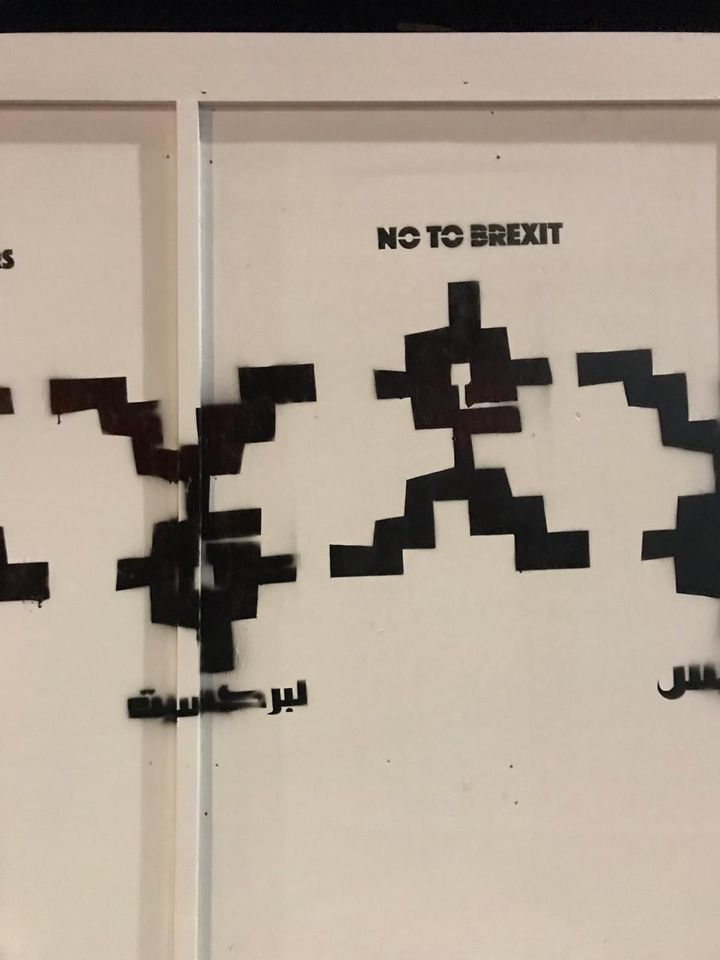 Bahia Shehab's latest political graffiti work in London was removed within 24 hours, according to the artist Courtesy of the artist

More than 2,000 people, including prominent activists and lawyers, are said to have been arrested after a flurry of demonstrations erupted in Cairo last week, according to reports in the Guardian. As the protests against the president Abdel Fatah al-Sisi took place, the Egyptian street artist and scholar Bahia Shehab—who came to global attention in the 2011 Arab Spring that saw millions of people demonstrating in the capital's Tahrir Square—opened an exhibition in London.

The show is the first for the Aga Khan Centre's new, non-commercial gallery in King's Cross. It includes a film with four circling screens showing disparate scenes, from a graffiti artist’s suitcase and a body floating in a Greek swimming pool, to a bridal couple’s bizarre progress through Cairo’s famous City of the Dead necropolis.

During the Arab Spring, Shehab developed a signature style of stencilled calligraffiti inspired historic representations of the word “no” found on mosques, tombstones or ancient buildings, echoing the Arabic saying “no, and a thousand times no”. She also uses lines from the famed Palestinian poet Mahmoud Darwish.

While Shehab has put her poetic protests on the walls of cities around the world, from Cairo to Stavanger, incredibly her latest offering in London was erased in just 24 hours. She took time out earlier this month to take a couple of volunteers to spray a construction site wall in Clerkenwell with the message, in Arabic: “no to borders, no to Brexit, and no to Boris”. A video still of Bahia Shehab's We Love Life (2019) © Bahia Shehab, courtesy of the artist

The exhibition, At the Corner of a Dream (until 5 January), also includes a small display of a protesters' gas mask and gloves, as well as a piece of asphalt from Tahrir Square, and part of a demolished house in Palestine. The Aga Khan Centre Gallery’s curator Esen Kaya calls Shehab "one of the most important Arab female artists working today”. Shehab says, “I’m not a commercial artist, I’m a street artist, so I don’t easily exhibit in galleries. I do when I have to but I’m more comfortable on the street.” A book with the same title as the show, a kind of travelogue of her global “journey of resistance and rebellion” in street art, is published this week.

Shehab says she avoided overt political messages in the film: “I’m an artist, but I’m not an artist in Egypt—I’m an educator, a curator. I don’t do any art in Egypt, I haven’t since 2013.”  The film, she says, is unlikely to be exhibited in Cairo.

The Aga Khan Development Network has worked on prominent heritage restoration and social programmes in Egypt. Shehab describes the AKF as “the only Islamic art patron I know globally that truly represents what Islamic culture stands for… I believe in their mission and I respect it and I’m very grateful that they gave a space for me to exhibit.”

One piece by Shehab remains on an English wall. A  30-metre mural called We Will Not Repent, based on a line by Darwish, was executed with some 40 volunteers on a wall at Lincoln University’s Nicola de la Haye arts building in late August.