Founder of advocacy group championing BAME figures says she is “tackling statues, artwork and signage next” 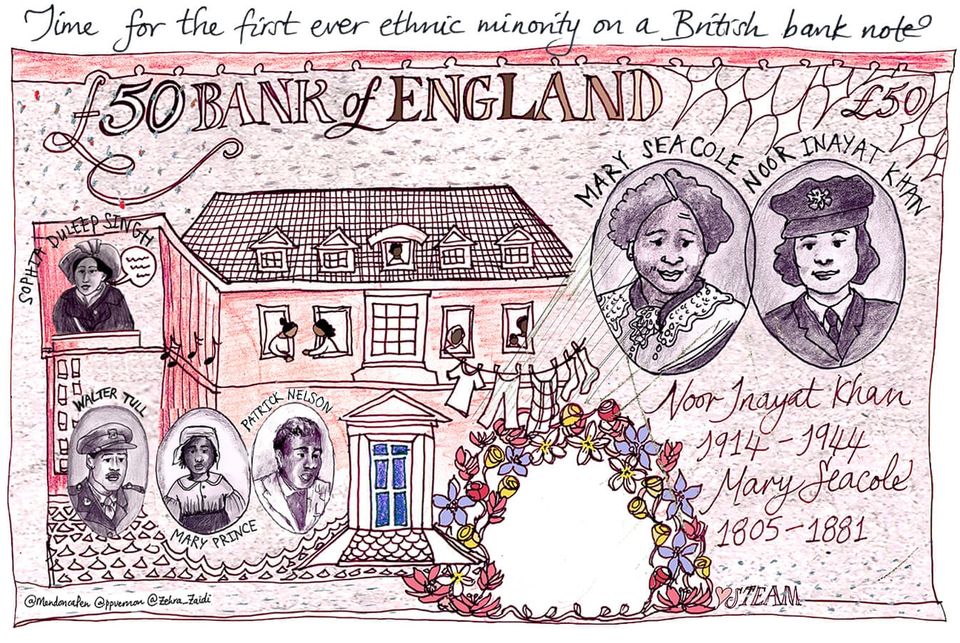 The campaign to put a BAME (Black, Asian and minority ethnic) person on coins and banknotes in the UK has moved a step closer after Chancellor Rishi Sunak backed the new currency plans put forward by the Banknotes of Colour advocacy group, which includes artists and activists. The move comes in the wake of Black Lives Matter protests held worldwide following the death of George Floyd in May.

John Glen, a minister at the Treasury, told the Sunday Telegraph newspaper that Sunak was “keen to support the timely proposal”; the plans have subsequently been forwarded to the Royal Mint. The campaign is led by the former Conservative party parliamentary candidate Zehra Zaidi who tweeted that she is “tackling statues, artwork and signage next”.

Zaidi recently launched a petition for the separate We Too Built Britain campaign, calling on the government to replace the toppled statue of slave trader Edward Colston in Bristol with a statue commemorating black anti-slavery campaigners. Her statue proposals include Mary Prince, the first Black woman to publish an autobiography in Britain, and the UK writer and abolitionist Ignatius Sancho.

Other key Banknotes of Colour campaign members include the social commentator Patrick Vernon whose book 100 Great Black Britons, co-authored with Angelina Osborne, is due out this autumn (published by Hachette). “The wider issues around Covid-19 and and Black Lives Matter have thrown a spotlight on the lack of Bame representation,” he says. Some commentators on social media oppose the plans but Vernon says: “The coins and banknotes have such symbolism—why can’t we have greater representation?”

The artist Pen Mendonça is also a key part of the campaign. “As a graphic facilitator/cartoonist who works [for] social justice, I developed graphics for the campaign, helped out on social media and let people know how they could get involved,” Mendonça tells The Art Newspaper. One of her campaign images shows BAME teachers, writers and musicians, with the heading: “Bank of England: it is time for the first ever ethnic minority on a British banknote.”

Early last year, the campaign group called for ethnic minority representation on the new £50 note, proposing candidates such as the Crimean war nurse Mary Seacole and the Muslim wireless operator Noor Inayat Khan who aided the French Resistance during the Second World War.

“Our campaign has not been taken seriously by the Bank. We have been met with a wall of legalese that the Bank of England has fulfilled its public sector equality duty. What then of the duty to engage with under-represented groups?” Zaidi wrote in the Financial Times.

Last July, the Bank of England, under former governor Mark Carney, chose the Second World War code-breaker Alan Turing as the face of the new £50 note which will enter into circulation by the end of 2021. “Turing was an important choice,” Mendonça says. “What was great was seeing people promote and debate so many amazing individuals from our rich and diverse history.” Mendonça recently created a work honouring the prominent Windrush campaigner Paulette Wilson, who died last week aged 64.