The Canada Pavilion when it was first built, around 1957 (left), and during its restoration in spring 2017 (right) Pavilion: NGC. Restoration: Francesco Barasciutti

A C$3m project to restore the Canadian pavilion and its surrounding landscape could change the way Venice Biennale visitors navigate the entire Giardini complex. The change of visitor flow through the park is an unexpected by-product of efforts to renovate the 1950s pavilion. The restored building and the exhibition, Canada Builds/Rebuilds a Pavilion in Venice, are due to be unveiled at the opening of the Venice Architecture Biennale on 26 May.

After nearly 60 years of use, the National Gallery of Canada decided in 2014 that its modest pavilion, nestled between Germany and the UK’s imposing Neo-Classical structures, needed upgrading. Alberico Barbiano di Belgiojoso, the heir to the Italian firm Banfi, Belgiojoso, Peressutti and Rogers (BBPR) that designed the building, was hired to carry out restoration. Anti-monumentalism was the idea behind the Modernist construction, Belgiojoso says, noting that it was built between two monumentalist pavilions of “the main protagonists of the 20th century”. The pavilion, which references the cone-shaped tents used by Canada’s indigenous peoples, was built following the Modern principle that form comes from function.

The original architects faced several obstacles, says Réjean Legault, a professor at Montreal’s Ecole de Design of the Université du Québec, who is co-curating the exhibition. “They had a modest budget and faced enormous restrictions with the site itself,” he says, explaining that they had to preserve the trees (which were incorporated into the structure) and could not block the view of the lagoon. And while historians call it a “sophisticated little building”, its reception has gradually become more negative, “especially in the eyes of artists who didn’t understand what the architects were trying to do”, he says. The show will tell “a different portrait of the building, one that hasn’t been told”.

One of the major criticisms is that it is a difficult space to show works of art. The restoration sought to mitigate this concern. Upgrades included installing air-conditioning, introducing flexible lighting systems and ensuring that the electrics met new regulations. Belgiojoso also devised a system for suspending works from the ceiling and added texture to the walls so works could be affixed to them. He says one of the main challenges was “to provide these new features or upgrades without ruining the integrity of the building’s historic fabric”.

The renowned Canadian landscape architect Cornelia Hahn Oberlander, and Bryce Gauthier of Enns Gauthier Landscape Architects, were hired to revamp the landscape. While Gauthier says it was essentially an exercise in “addition by subtraction” as much work involved cleaning up overgrown areas, his team did construct one new element: a large sculpture deck at the back.

But it was wider conversations with the Biennale’s organisers about the surrounding landscape that could potentially have the most impact on visitors. The area behind Canada and its neighbours—the UK, Germany, Korea and Japan—which butts up against a waterfront promenade, was a no-go zone, “buried in shrubbery and full of mosquitos”, Gauthier says. His team pruned the shrubs, regraded the area and created a circulation route so people can enjoy the space. Gauthier says the Biennale is looking to replicate these ideas throughout the Giardini. “The outcome will be a fully accessible route that will take you through the entire Giardini and spread visitor traffic throughout the space rather than just focusing on the central boulevard,” he says. 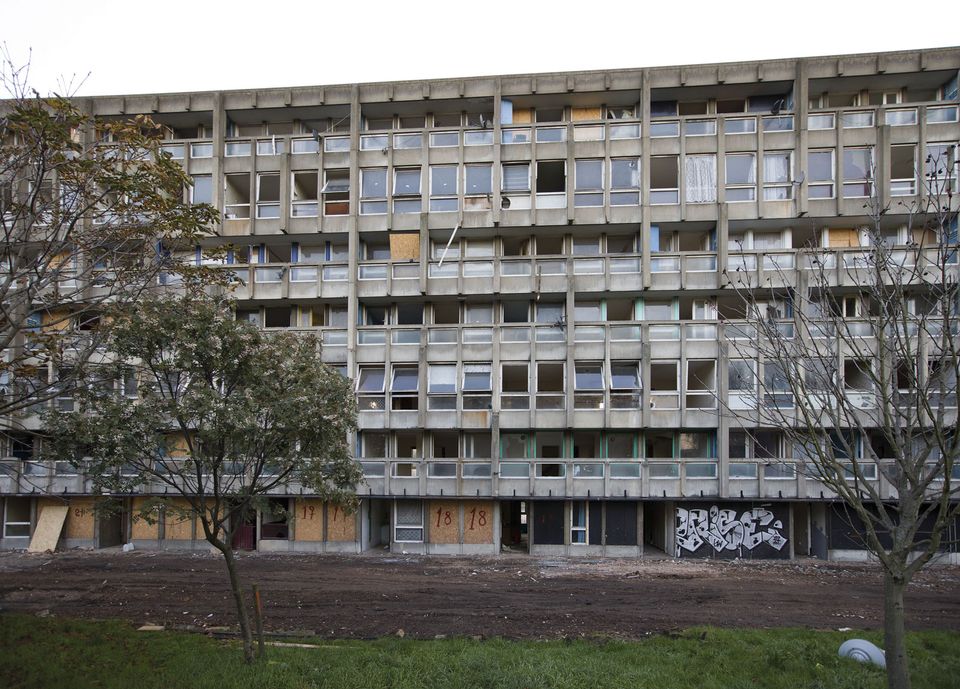 A section of a three-storey façade from a 1970s east London council estate that is currently being demolished to make way for a controversial £300m development is due to be shown at the 16th International Architecture Exhibition in Venice (26 May-25 November). When efforts failed to list Robin Hood Gardens—a Brutalist social housing complex in East Poplar designed by the architects Alison and Peter Smithson—as a heritage building and news of its razing reached the Victoria and Albert Museum (V&A), the institution acquired an 8.8m-tall and 5.5m-wide chunk of the structure, as well as the interior fittings of two flats.

The reassembled façade will be shown in the Pavilion of Applied Arts, along with a new film installation by the Korean artist Do Ho Suh that documents the interiors of Robin Hood Gardens. “The case of Robin Hood Gardens is arresting because it embodied such a bold vision for housing provision, yet less than 50 years after its completion it is being torn down,” say the curators of the pavilion, Christopher Turner and Olivia Horsfall Turner. “Out of the ruins of Robin Hood Gardens, we want to look again at the Smithsons’ original ideals and ask how they can inform current thinking about social housing.”

Appeared in The Art Newspaper, 301 May 2018
More NewsTopicsRestorationVenice BiennaleCanadaItalyVenice National Gallery of Canada