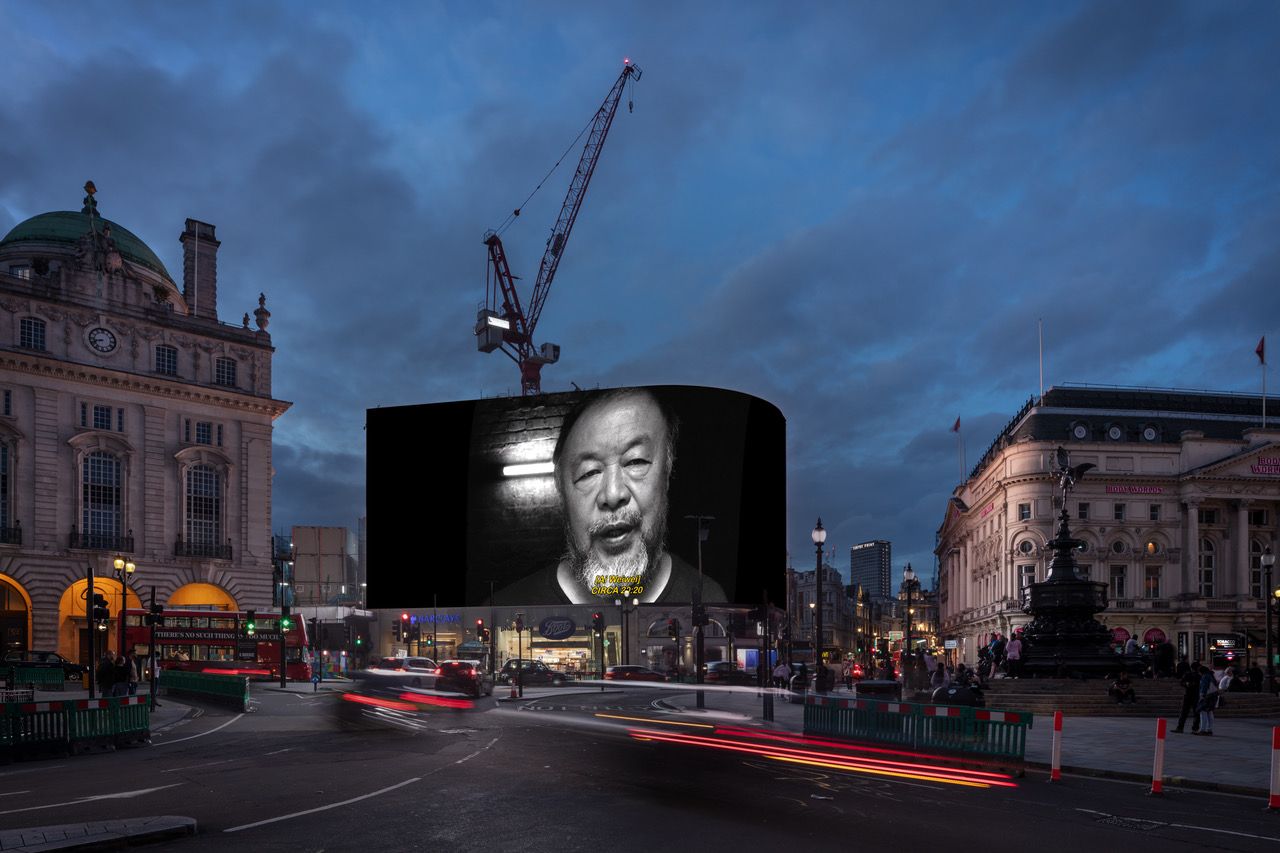 2020 is not a number any of us will forget in a hurry. And now it has extra significance with the launch of CIRCA, a new site for digital art in the most conspicuous of public places—the giant electronic billboard in London’s Piccadilly Circus. Every evening from 1 October, at precisely 20:20 GMT, Europe’s largest billboard will pause its usual adverts for two minutes to take a non-commercial break devoted to art. Each month a different artist will be invited to occupy the colossal illuminated canvas with a specially commissioned work that considers our world, circa 2020.

The first artist to fill this two-minute daily slot is Ai Weiwei, who says that CIRCA “offers a very important platform for artists to exercise their practice and to reach out to a greater public”. The Chinese dissident artist is reflecting on this moment in time with a new 60-minute film that “begins from the year [he] was born through to the current unceasing pandemic threatening the human condition globally”. Weiwei’s inaugural CIRCA commission will unfold in two-minute sections every evening throughout the month of October.

This will be followed in November by a programme curated by Elvira Dyangani Ose, the director of The Showroom Gallery in Marylebone, London, who has commissioned new work from the Peruvian-born, Barcelona-based artist Daniela Ortiz and the Californian artist Cauleen Smith. The British artist Eddie Peake is then slated for the December slot, where hopefully he will offer some spectacle in what promises to be a very bleak midwinter.

CIRCA is the brainchild of the artist Josef O’Connor, who first approached the site owners Landsec with a tweet proposing an art project. O’Connor describes their current relationship as “very trusting” and has since seen his initial idea evolve from a proposed one-off slot into its current daily incarnation, which he hopes will continue into next year and beyond. “We want to use this platform for a purpose,” he says. “We know we’re at a crossroads in the world today and we want to use these two minutes to pause commercialism and to make people stop, think and engage with new ideas in the public space.”

As well as communicating directly to a live audience in Piccadilly Circus, CIRCA is also accompanied by an online platform, CIRCA.ART, which will stream the programme in unison with the Piccadilly Lights screen. This enables participating artists to upload additional supporting content. And crucially it also offers audiences in front of the Piccadilly Lights the opportunity to connect their headphones to the digital screen for a full audio-visual immersion in the works being shown. On the website it will also be possible to buy exclusive limited-edition works made by the participating artists for CIRCA. which will raise funds for a range of charities supporting the UK cultural sector during the Covid-19 pandemic. For the October launch, Ai has created a £100 print, available for this month only.

O’Connor, who is responsible for the CIRCA programme, relishes the speed with which he can curate digital works that respond to world events as they unfold. “Unlike the Fourth Plinth [in Trafalgar Square] which takes two years to sign off, we can get works confirmed and uploaded within a month, so they can be in line with the news,” he says. O'Connor adds: “CIRCA doesn't only want to show big blue chip names, we are working with emerging artists too.” For whether CIRCA is working with big names or newcomers, by putting these artists up on Piccadilly Circus and creating a daily two minute pause, O’Conner believes that “in our current state of emergency, artists can shine a light in places that seem too dark and, in doing so, create new perspectives that can challenge, inspire and change the future”.