Collectors can find a new niche at Frieze Masters

One challenge for the top-league art fairs is the need to reinvent themselves each year. Although the Frieze London contemporary fair can rely on live performances or immersive installations to jazz up a tried-and-tested model, Frieze Masters has to innovate with history (the cut-off date for works shown at the fair is 2000).

Hence this year’s inaugural Collections section, which delves into the scholarly, niche categories that account for a huge amount of overlooked, specialist trade in the art market. The section, which comprises eight European galleries, was devised and organised by the curator Norman Rosenthal, who cut his teeth at the fair last year by creating the home of a fictional scholar-collector in Helly Nahmad’s booth (the dealer is at stand G1 this year).

Rosenthal has brought together a diverse selection of specialists with items from around the world, ranging from tiny fish hooks from the Pacific Islands to wooden sculptures from Borneo. The works span more than 4,500 years of history. “It’s a great opportunity for dealers who wouldn’t normally show at these sorts of fairs and who mostly operate on a much smaller scale, but who have important work to show,” says Simon Theobald, whose stand (FM, G12) focuses on faces in German Expressionist art.

“The range of objects is eclectic, but all the dealers [in this section] represent connoisseurship and conversation, while there’s a lot of hot air around the contemporary market,” says Jo Stella-Sawicka, the artistic director of Frieze (Europe, Middle East, Russia, Africa).

At the same time, Collections is a for-profit project. “It’s a trade fair, and people shouldn’t forget that,” says Daniel Blau (G6), who is responsible for the combination of images by David Bailey and fish hooks. Multi-million-dollar, prime Modern works are available at Frieze Masters, but the price points in the Collections section, which start in the four-figure range, should encourage a brisker trade (and fascinating conversations) at this year’s fair. 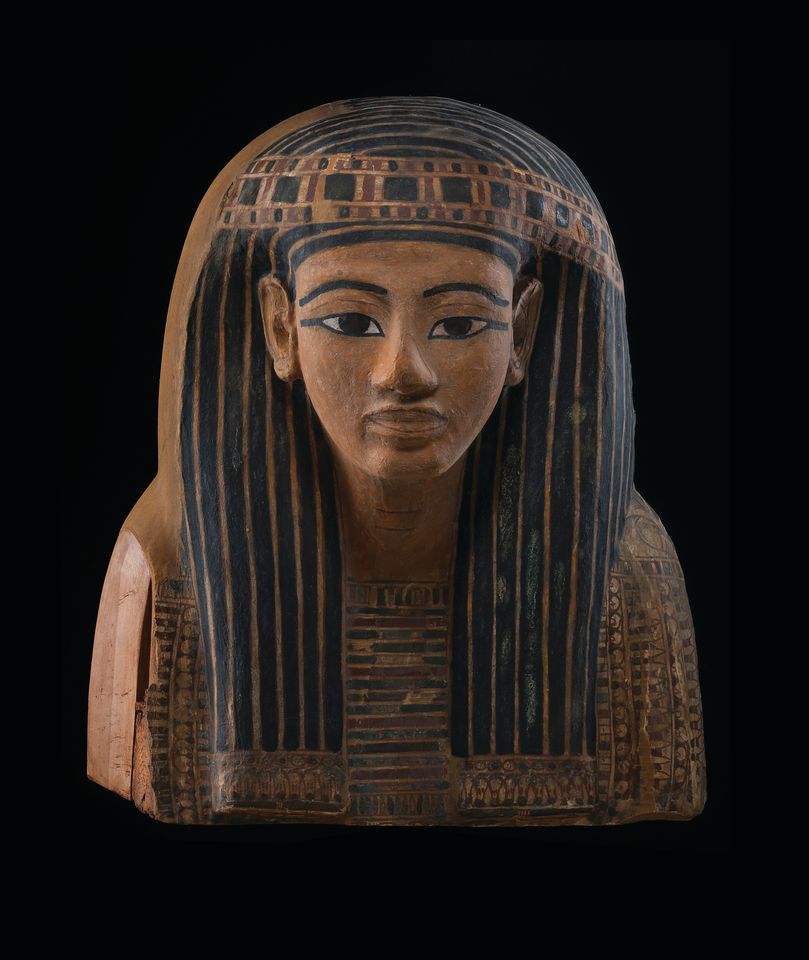 When Norman Rosenthal proposed a stand dedicated to wooden Egyptian sculpture, Jean-Louis Domercq, the founder of Sycomore Ancient Art, understood the challenge. “It isn’t easy to find Egyptian wood works,” he says. Although Egypt’s sands have “preserved sculpture better than the soil of any other country”, says the Egyptologist Bernard Bothmer, wooden works from Giza have not always fared so well. So the highlight of Domercq’s stand is this 108cm-tall sculpture of a senior official (around 2570-2350BC), made in Giza during the construction of the pyramids (price on request). Ten other artefacts (priced between £15,000 and £300,000) include part of a sarcophagus from the early 19th dynasty of Rameses II (around 1300-1230BC). 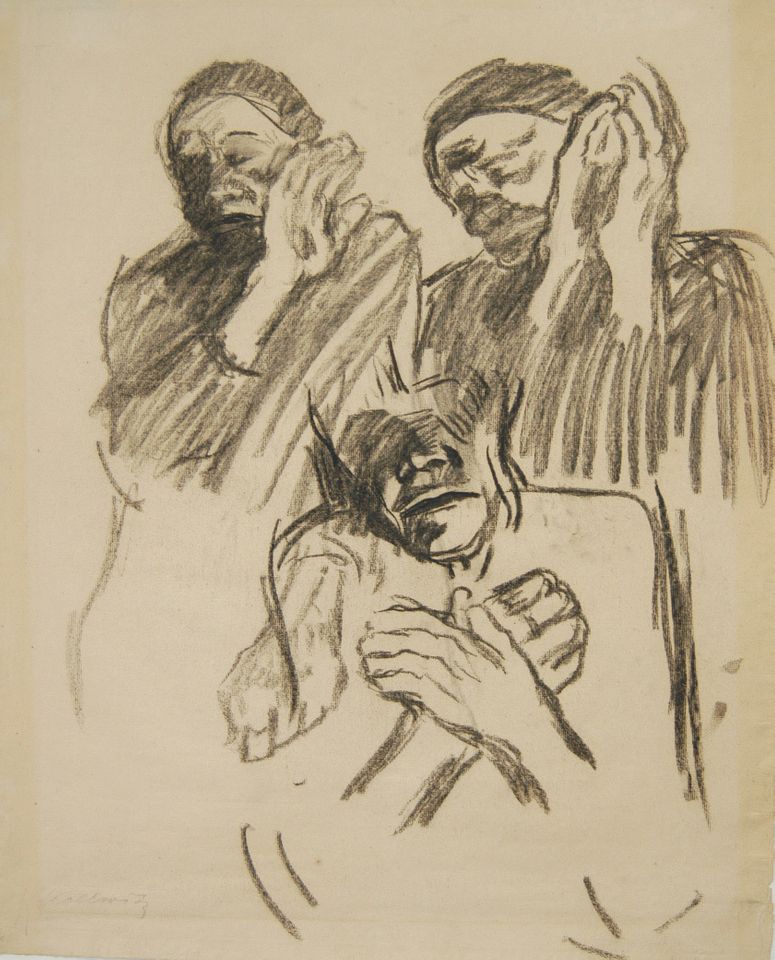 Simon Theobald’s stand centres around three self-portraits by Max Beckmann, showing how Germany’s leading artists of the early 20th century responded to the events around them. The dealer cites wealth and empire, poverty and civil uprisings, war and the defeat of a nation as characteristics of the extreme environment in which the German Expressionists were working. Their responses range from Alexej von Jawlensky’s “meditative and colourful” pieces to this depiction by Käthe Kollwitz of the poverty that was symptomatic of Germany’s rapid population growth at the end of the 19th century. Most of the 25 works on offer are prints, and most are priced under £100,000, although some go up to £400,000. 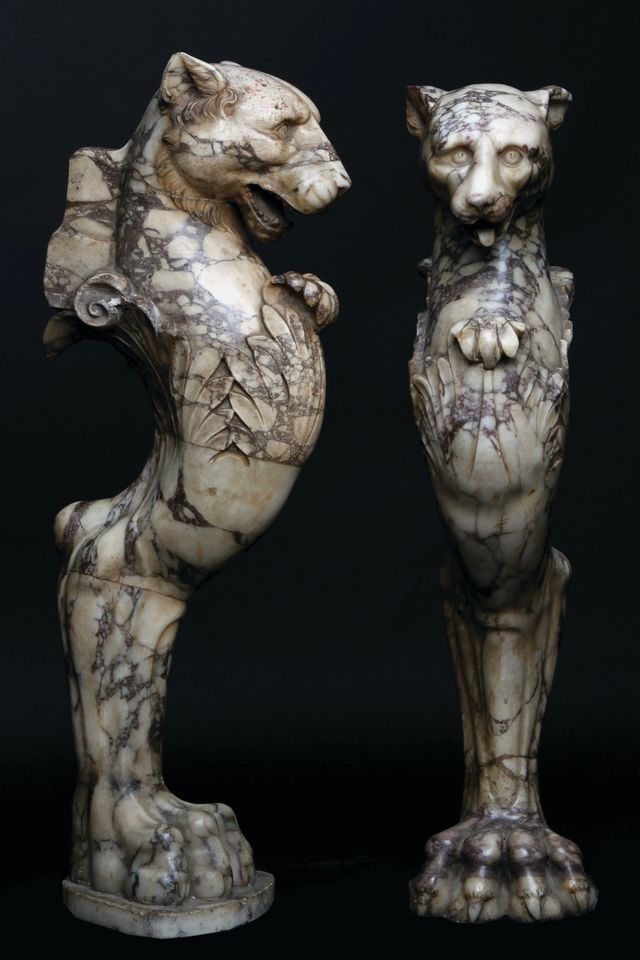 Olivier Chenel says that his stand represents an exhibition of coloured marble that he has been planning for ten years. The 30 pieces he is showing are predominantly Roman; coloured stone—used to decorate homes and temples, as well as for sculptures—was particularly popular during the Augustan period, between the first centuries BC and AD. Highlights include this pair of trapezophoros (table stands) in the shape of panthers—one male, one female—made in Rome in the middle of the second century BC. They are carved in a purple and white Pavonazzetto marble, imported from Turkey, and are believed to have been restored in the 18th century by the antiques expert Bartolomeo Franzoni in Rome. Prime works on the stand are priced up to £300,000, while other coloured marble pieces are available for “a few thousand pounds”, Chenel says. 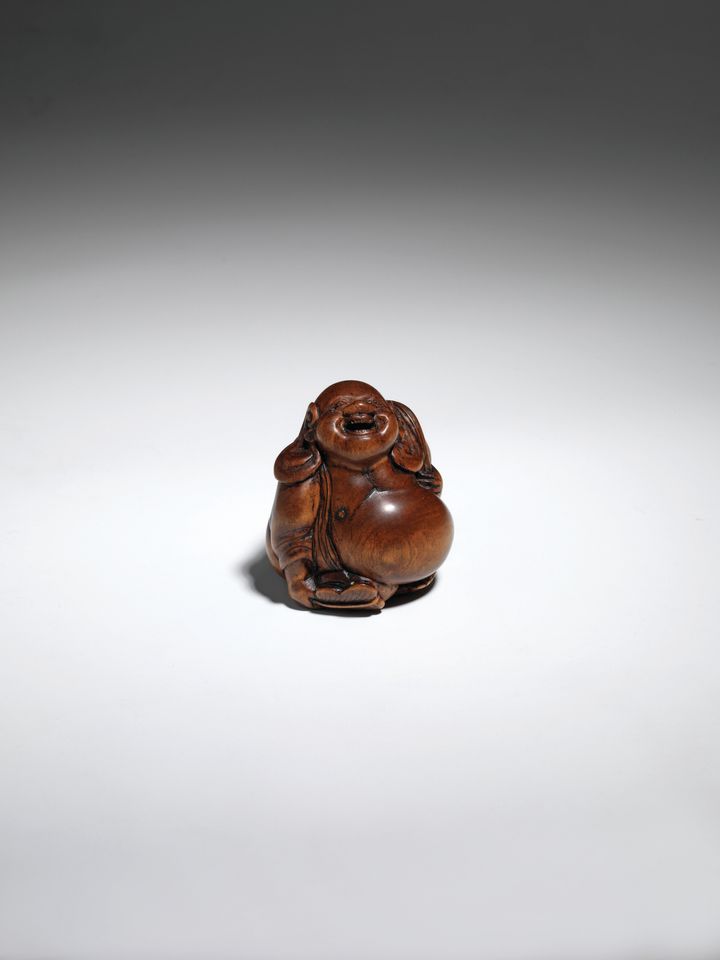 Sydney L. Moss’s stand centres around Japanese sagemono, the items that hung from the obi (sash) on a kimono from the 16th century onwards. These include inro (lacquered boxes) and the netsuke carving that held them together. These 94 miniature carvings (priced between £1,000 and £45,000) show that masterpieces can come in very small sizes. Finn Daley Roberts, a specialist at the gallery, says that the popularity of The Hare with Amber Eyes, Edmund de Waal’s 2010 netsuke-centric book, has helped to raise awareness. Daley Roberts highlights this boxwood carving (around 1820) of Hotei, one of Japan’s seven lucky gods, who grins as his belly spills out of his robe. 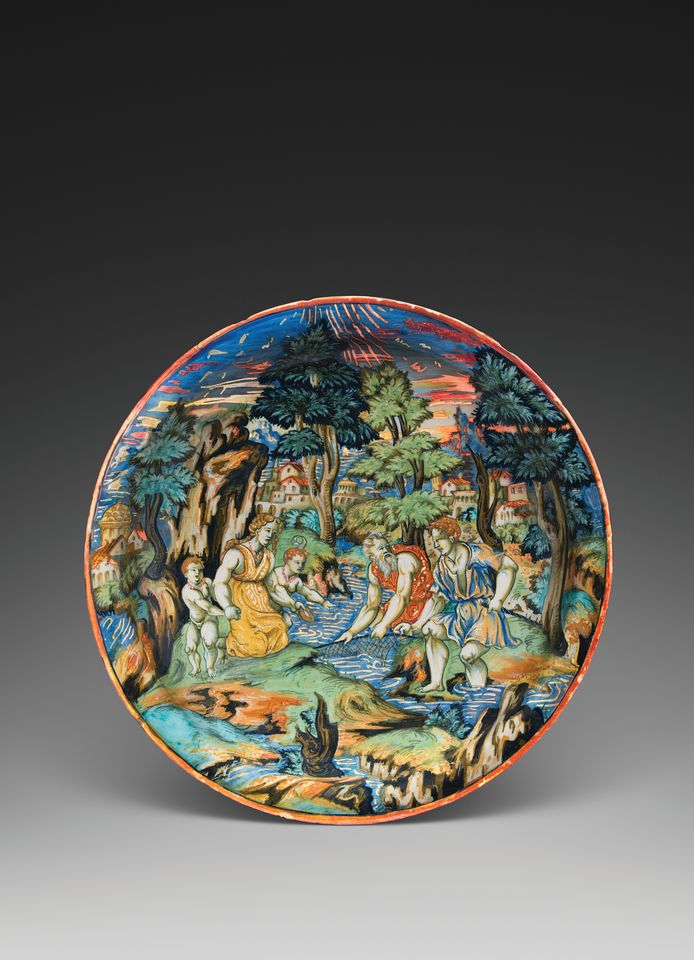 Maiolica, or Italian tin-glazed pottery, has been collected since the 16th century by patrons ranging from Isabella d’Este (1474-1539) to, more recently, Bernd and Eva Hockemeyer. One reason, says Bazaart’s owner, Justin Raccanello, is that “when you fire something, it can’t change—the colours stay the same. They give an idea of what Renaissance paintings would have looked like.” The items, which include plates, bowls and jugs, were not used as tableware; rather, they were used for display. Bazaart’s stand is arranged around a 15-piece credenza, or display of items (priced at around £1.5m). On the walls are objects including this painted dish (1540) depicting the story of Latona, who turned peasants into frogs, from Ovid’s Metamorphosis. The piece is by the painter Gubbio or Urbino and comes from the d’Avalos collection, Naples. The theme of Amir Mohtashemi’s stand of around 30 objects is “trade”—an apt reminder that the international art market existed long before the 21st century’s proliferation of art fairs. Between the 16th and 18th centuries, there was high demand in Europe and the Middle East for items from India and China, and makers quickly learned to create pieces that targeted overseas tastes. Adding to the luxury status of the goods was their overseas provenance. “Going to India [from Europe] in the 16th century was like going to the moon. At least 60% of sailors perished,” Mohtashemi says. His stand includes blue and white ceramics from China, made to satisfy buyers in the Middle East, and a Goanese cabinet made in India for Portugal. Prices range from £5,000 to £120,000. 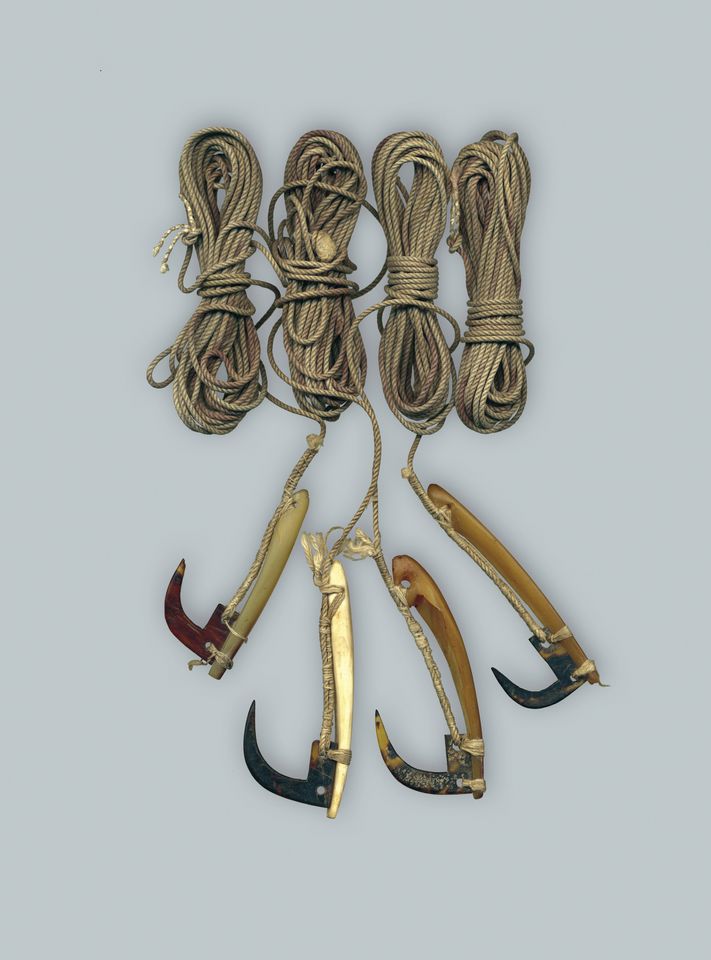 Frieze Masters 2015 must be the first art fair to display fish hooks. The fact that they are being paired with unique photographs by David Bailey adds to the eccentricity of Daniel Blau’s stand. The dealer acknowledges that the combination is “an odd choice”, but he has researched and collected the intricate yet functional hooks since discovering them while photographing rock carvings in Hawaii in the 1980s. Predominantly from the 18th and 19th centuries, they range in price (on request) from the low hundreds of pounds to nearer £100,000 (the late Sheikh al-Thani of Qatar drove up prices in this niche market). Bailey’s images, made between 1961 and 1997, were “torn” by the photographer in the darkroom before what Blau calls “the magical moment of exposure—an act of pure alchemy”. They are available at £4,300 each. Bernard de Grunne’s stand of ancestral figures from Borneo’s Dayak people (native inlanders) is as much a presentation of intense research into tribal sculpture as an art-fair booth. Borneo, the world’s third largest island, is divided into three countries: Malaysia, Brunei and Indonesia. De Grunne cites research showing that the Dayak people are descended from Borneo’s original inhabitants, who arrived around 35,000 years ago. He, alongside other specialists in this field, has spent the past 30 years redating works once believed to be from the 18th and 19th centuries as far back as 1000BC, and has identified five “distinct styles”. The works at Frieze Masters are from the later periods, including this piece, dated between 1474 and 1635. Prices range from €50,000 to €150,000.