As a Brexit deal is agreed, confused and resigned UK art world ponders life after leaving the European Union

Art dealers, shippers and auctioneers are unsure about how leaving the single market will impact their business—but there is a silver lining 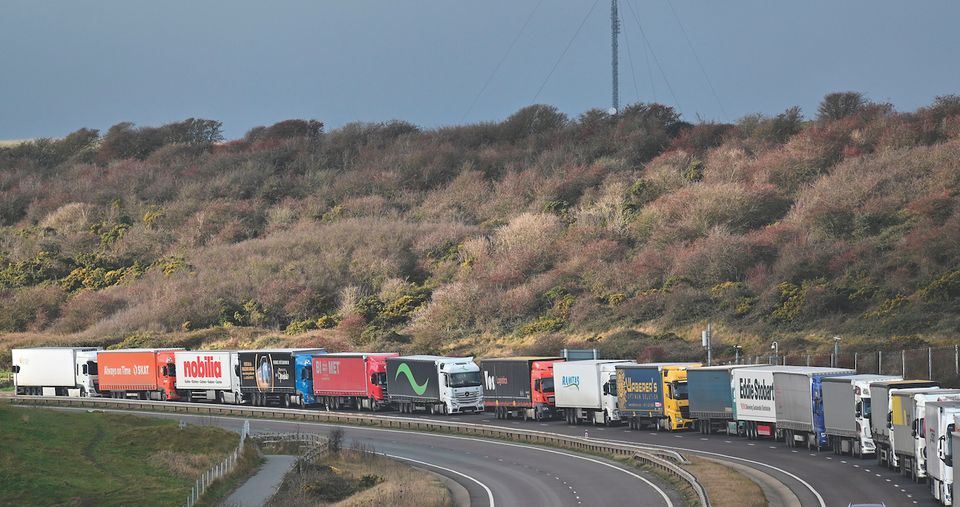 Regular—and very long—lorry queues at the port of Dover are inevitable in the next few months, as drivers will have to deal with new paperwork when transporting works to Europe Justin Tallis/AFP via Getty Images

Red tape and border congestion are among the biggest worries for the art trade as the UK’s Brexit transition period comes to an end, according to a straw poll conducted by The Art Newspaper this month. UK Prime Minister Boris Johnson and the European Commission president Ursula von der Leyen announced 24 December that a trade deal had been agreed days before the transition ends on 31 December.

“Wait and see” was a common theme among UK dealers and auctioneers. Other industry professionals proved more proactive in their preparations for the UK’s exit from the single market.

Anthony Browne, the chairman of the British Art Market Federation, which represents auctioneer and dealer associations, has spent more than two years negotiating with government departments. Export licensing, CITES (Convention on International Trade in Endangered Species) and VAT have been “very thoroughly covered” in these discussions, he says. “Arrangements have been put in place that give clarity on how the cross-border tax system will work, but obviously a no-deal will affect that outcome. That is the imponderable.”

Most art market goods are not subject to special import/export tariffs, although EU countries levy import VAT on works coming in from outside of the EU. It is the associated increase in paperwork involved in getting goods into the EU that is the bigger issue.

Larger businesses with existing infrastructure for packing and shipping to and from countries outside the EU, such as the US and China, can absorb these additional costs, to a degree. Victor Khureya, the operations director of the international specialist shipper Gander & White, which caters to private clients and restorers as well as the trade, says: “Most people we have spoken to are generally ready for the worst-case scenario. Anything better than that is a bonus.”

Khureya’s firm has been working with UK customs as procedures are tested, but ports are already experiencing congestion, he says, and the EU seems less prepared. “We have been speaking to our counterparts in EU countries to find out what procedures they have in place for returning goods. There is no guidance yet on this from individual EU governments.”

Craig Davies and Catherine Thompson, partners in the accountancy firm Rawlinson & Hunter, say shipping arrangements will bring more bureaucracy and expense, making certain price points prohibitive. “The more regular buyers will, however, be used to the time and financial cost of moving art works to where they want them.”

An added attraction for EU private collectors buying from UK dealers is preferential VAT rates, they say. With UK exports zero-rated for VAT, collectors based in the EU may be able to bring art purchases into their home country at a reduced rate of import VAT, which can be as low as 5% in some EU nations.

To bring some much needed clarity on VAT and tariff arrangements, Helen Carless, the chairperson of the Society of Fine Art Auctioneers and Valuers, says her organisation is producing a briefing document for its members.

The general frustration over the uncertainty and possible border disruption is echoed by Christopher Battiscombe, the director general of the Society of London Art Dealers, which hosted a last-minute seminar with other associations last month. But he is also cautiously upbeat: “I am confident that the UK art trade will come through all this without too much lasting damage.”

Shipping agents alone have access to Chief, the government database for customs declarations for UK/EU imports and exports, which must be processed through this system to be legal.

The immediate future looks less certain for smaller firms who do not use the Chief database. “We are advising firms to make sure that the necessary evidence of customs declarations is always obtained,” says Mark Dodgson, the secretary general of the British Antiques Dealers’ Association. He adds that VAT-free sales may attract overseas trade buyers to the UK but that rule changes mean purchases can no longer be taken home as hand luggage, as this would breach regulations by avoiding declarations through Chief. The additional despatch costs “could put off some private impulse buyers”.

Anecdotal evidence points to at least some dealers hoping to find a way round this. One says: “If import VAT and other costs price dealers out of the market, they will simply treat individual purchases as gifts and pay duty accordingly. There’s an insurance risk in doing so, but if the item is inexpensive enough, they may choose to do this.”

The law firm Boodle Hatfield has also noted a recent increase in international clients moving staff from EU jurisdictions to the UK so they become eligible to apply for pre-settled status.

Meanwhile, among auctioneers, attitudes are mixed. “Our Brexit preparations haven’t gone much beyond keeping a lookout for definitive news,” says one. “I can’t see anyone presently having a cogent view on the practical manifestations of import/export frictions given we don’t yet have a clue as to what sort of a border we end up with.”

Another adds: “Not one client has asked me about it. I think buyers won’t care, and sellers will expect us to find a way round it.”

One auctioneer has hired a shipping specialist: “This may look like an expensive solution, but it has several benefits. It allows us to delegate compliance work to an in-house expert who is a known entity among officials we will need to interact with. It’s also a great selling point as buyers know they can rely on expert service for fulfilment, and potential consignors know that we should have no problem attracting EU buyers as a result.”