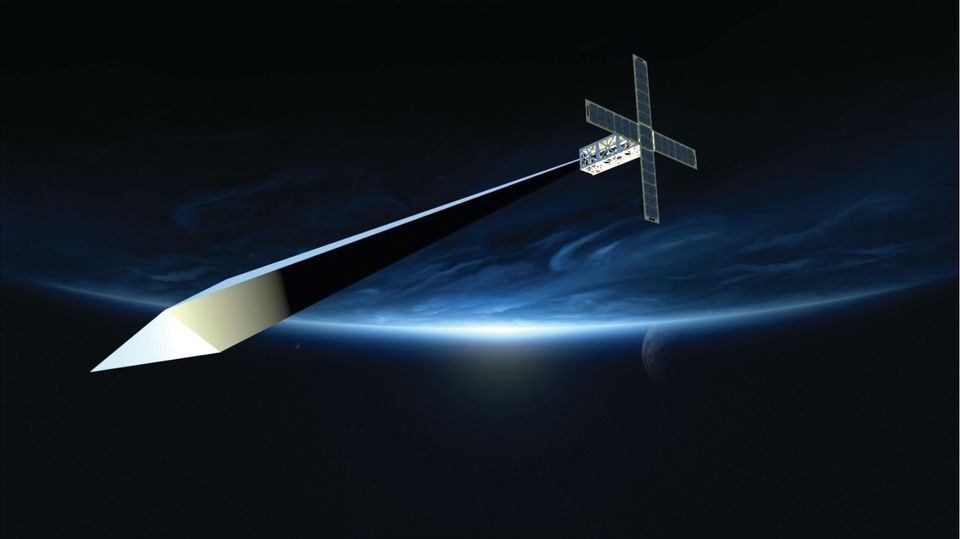 The Nevada Museum Of Art and the artist Trevor Paglen are crowdfunding to launch—literally—a sculptural satellite into space, “purely as an artistic gesture”, according to the museum, which aims to raise at least $70,000 to help get the work off the ground. “I’m going to create a reason for you to look up at the sky, and think about what it is that you’re looking at,” Paglen says in a Kickstarter video.

Orbital Reflector is a mylar balloon that will be deployed from a small brick-sized container sent up into low-earth orbit on a SpaceX rocket from California’s Vandenberg Air Force Base next summer. The launch is timed to coincide with a mid-career retrospective of Paglen’s work planned at the Smithsonian American Art Museum in Washington, DC.

To realise the project, Paglen is working with the firm Global Western and the retired satellite engineer Zia Oboodiyat, who he’s known since they partnered on another work attached to a satellite, The Last Pictures (2012). While early models for Orbital Reflector, shown at the Art Basel fair and the Nevada Museum of Art, imagined a spherical balloon, the team realised that they needed to create “an object that has the maximum amount of surface area, so it can be as bright as it can be when seen from the ground,” Paglen says.

They came up with a long, diamond-shaped kite that resembles an abstract sculpture, and there is a clear nod to the ideas of artist like Kazimir Malevich and Yves Klein, who both proposed sending art into space. “They were trying to imagine a very different present and a very different future in a way,” Paglen says of the avant-gardists’ work. With Orbital Reflect, he is similarly engaging as an artist in a field normally reserved for military or commercial purposes. “It’s aerospace engineering for aerospace engineering’s sake,” Paglen notes.

Once unfurled, the Orbital Reflector will remain in the sky for four to five weeks—“depending upon the weather on the sun”, Paglen says, adding that “the dynamics of the orbit are chaotic, it’s fundamentally not predictable”—until atmospheric drag pulls the satellite down to earth. Before that happens though, Paglen plans to host viewing parties at museums across the country, where the public can gather to “look at the sky and the constellations, and the sculpture will pass overhead”.

Meanwhile, the artist’s upcoming exhibition at the New York gallery Metro Pictures, A Study of Invisible Images (8 September-21 October) features works that are drawn from the growing collection of visualisations “made by machines for other machines,” Paglen says.

Through his time as an artist-in-residence at Stanford University, and working with software developers and computer scientists, Paglen has turned the digital algorithms used by artificial intelligence systems into a series of prints and video projections. Or to put it more simply, Paglen says, these works look at questions like “What does a mountain look like to a self-driving car?” And the answers might surprise most human viewers. “Some of them are truly weird,” he says.