UPDATE: Judge Paul Gardephe announced the De Soles' settlement to the jury this morning, 8 February, saying: "it resolved all of the plaintiff's claims against Ann Freedman". But although Freedman has been cleared from the lawsuit, the judge said she is still expected to testify because "her conduct and state of mind" have an effect on the case against Knoedler. Freedman is expected to take the stand tomorrow, 9 February.

In the middle of a closely watched trial, Ann Freedman, the former director of the Knoedler Gallery, has reached a settlement with Domenico and Eleanore De Sole, the collectors’ lawyer Gregory Clarick confirmed Sunday night. The settlement, to be announced in court on Monday morning, comes after two weeks of witness testimony for the plaintiffs, who allege that Freedman and Knoedler knowingly sold the De Soles a fake painting purportedly by Mark Rothko for $8.4m in 2004.

The case against the remaining defendants—the gallery and its owner, 8-31 Holdings—will continue on Monday, when Freedman is scheduled to take the stand, says Clarick.  He declined to comment further until the settlement is announced in open court. Knoedler's lawyers were unavailable to comment at the time of publishing.

The De Soles’ painting is one of 40 forged Abstract Expressionist works brought to Knoedler by the Long Island art dealer Glafira Rosales from 1994 to 2008. When she pled guilty to federal charges of tax evasion and money laundering in 2013, Rosales admitted that the works were counterfeits painted in Queens by the Chinese artist Pei Shen Qian. Rosales has not yet been sentenced. Qian has been indicted and is believed to be in China.

In all, ten lawsuits were brought against Freedman, Knoedler, and 8-31.  Five were settled before the De Soles’ trial began.  The defendants maintain that they were also deceived by Rosales, and that Freedman believed the works were authentic.

Evidence has been presented that undermines claim, and although Freedman will no longer be a defendant, legally all the evidence against her applies to Knoedler as well.

The jury has heard testimony that Knoedler heard doubts over the authenticity of the Rosales works early on. For example, MoMA’s curator emeritus John Elderfield and Richard Diebenkorn’s daughter both testified that in 1994 they told Freedman they had doubts about the supposed Diebenkorn works she was selling. Sharon Flescher, the head of the International Foundation for Art Research, testified that in 2003 the organisation concluded that it could not confirm the authenticity of a purported Jackson Pollock that came from Rosales and that the provenance Knoedler provided for the work was “inconceivable”.

According to the forensic conservator James Martin of Orion Analytical, evidence that some works weren’t authentic was visible to the naked eye, and he said Knoedler wanted him to change the conclusions in his report on two works meant to be by Robert Motherwell. The accountant Roger Siefert testified that Knoedler was wholly dependent on selling the fakes to keep afloat, and Freedman received more than $10m as her share of the profits in selling them. And seven prominent art world figures the Soles were told had viewed the Rothko have denied authenticating or otherwise approving it. 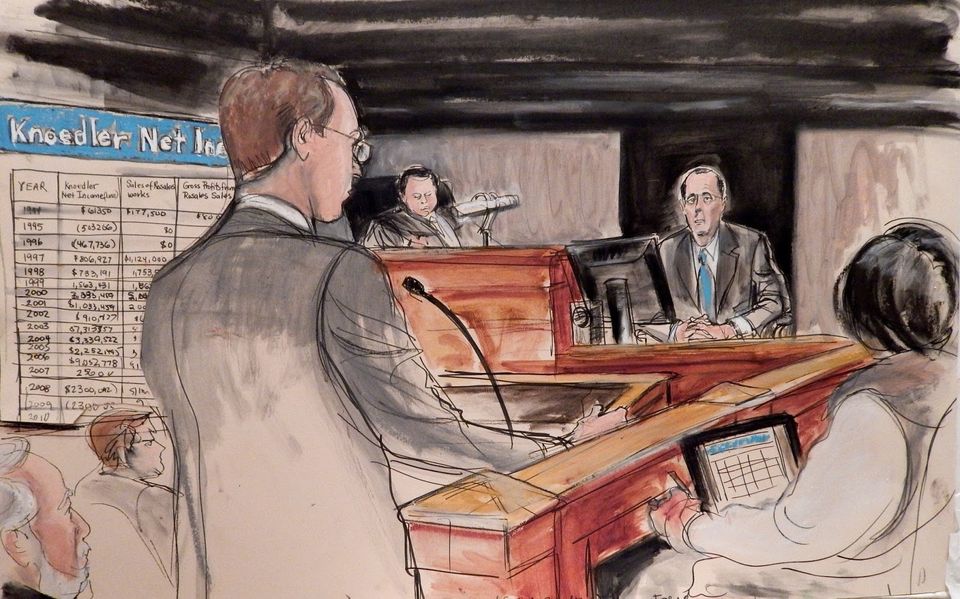 The jury has also heard from the conservator Dana Cranmer, who testified that the De Soles’ painting did not look like a forgery when she examined it. Other witnesses included some of the Rosales works in gallery and museum exhibitions. Freedman is still due to take the stand, and the defense is expected to present its witnesses this week.

News of the settlement was first reported by the New York Times Sunday night. Freedman’s lawyer Luke Nikas told the Times that “from the very beginning of these cases, Ann never wanted to keep a penny of the profits she made” from selling the fakes.

Freedman's lawyer, Luke Nikas, told The Art Newspaper on Monday morning that "we are trying to resolve the other cases as well" and would have liked to reach a global settlement, but "it's difficult when you have that many cases".

When Freedman saw the federal indictment, "obviously she saw the writing on the wall", Nikas says. Freedman wanted to give the money back to her clients "but that was difficult because it was a question of scale." No one in the art world wants to be connected to this, he says, everyone "is running for the hills". The lawyer adds that Freedman is still selling art privately, mainly works by Frank Stella, Helen Frankenthaler and the colour field painters.

Gregory Clarick, the De Soles's lawyer, said his clients are "not surprised that Ms. Freedman settled after two weeks of trial evidence showing that, for fifteen years, Knoedler ignored the most eminent experts, buried unhelpful research, made up stories about where the works came from, earned profit margins that virtually announced the fraud, hid the truth and lied to collectors… to sell fakes and make millions".