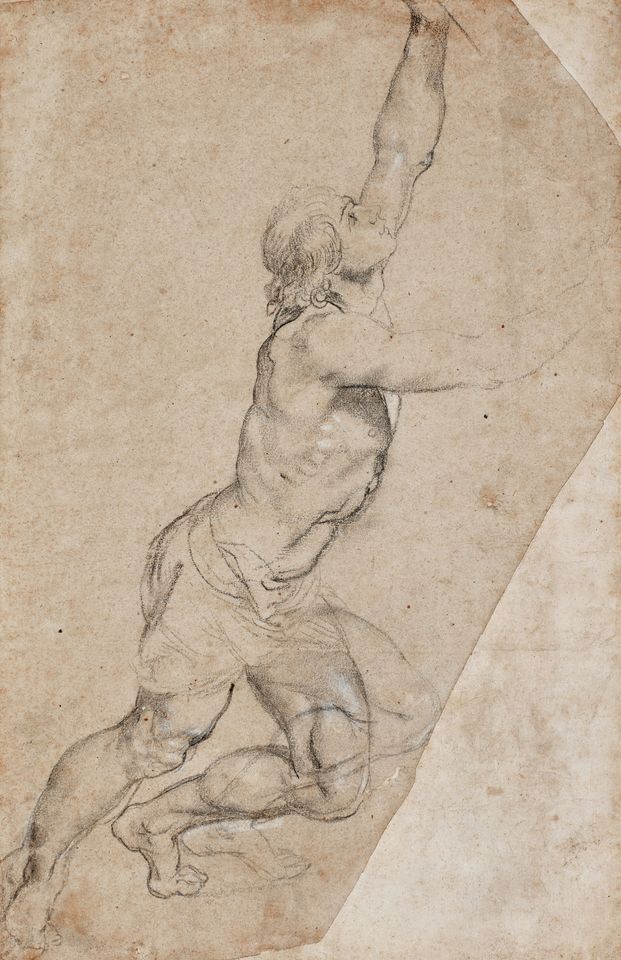 The Raising of the Cross in the Antwerp church of Saint Walburga set at new record for a Rubens drawing at Sotheby's when it sold for $8.2m. Sotheby's

Sotheby’s Old Master drawings auction on 30 January was the unexpected breakout star of New York’s Master Week (through 2 February), which over four days offered prints, drawings and paintings up to the 19th century. Estimated to bring between $6m and $8.43m, the morning affair rang up $15.1m, the highest total of any sale in the category at Sotheby’s.

It also included the top price of the week: $8.2m (with fees) for Peter Paul Rubens’ large charcoal drawing of a muscular nude young man with raised arms. This study for the monumental multi-figured altarpiece The Raising of the Cross in the Antwerp church of Saint Walburga (after 1610) carried only a low estimate of $2.5m. But when the hammer finally came down at $7m, after a drawn-out duel between international dealer Bob Haboldt and a phone bidder, represented by Sotheby’s Elisabeth Lobkowitz, a new record for a Rubens drawing was set. The winning phone bidder also secured the following lot, a charming red chalk portrait of a youth for $1.4m, far above its high estimate of $45,000. Leading dealers are betting that it is by the Bolognese painter Agostino Carracci, who championed the primacy of drawing from life.

A highly finished black chalk drawing, a valuable record of Leonardo’s lost Florentine fresco The Battle of Anghiari, made by an anonymous Italian artist of the 16th century, delivered some “Leonardo magic”. Starting from the opening bid of $38,000 it soared to $795,000 with fees, thanks to at least four Asian bidders. A private dealer was finally able to take it home. These lots were part of a conservatively priced group of 13 drawings from the magnificent collection of King William II of The Netherlands, assembled in the first decades of the 19th century, only one sheet did not find a buyer at Sotheby’s. The consignor was one of the King’s heirs, Princess Christina, an aunt of the current King Willem-Alexander.

Sotheby’s Master Painting Evening Sale later in the day was a more muted affair, though still squarely falling within in line with its total estimate and raking in $52.7m. A group of 11 paintings by women artists of the pre-modern era, branded together as the Female Triumphant, was much hyped before the sale, but only the best works scored big. Two phone bidders lifted Elisabeth Vigée-Le Brun’s painter of an Indian ambassador to $7.2m—the top lot of the evening. A record fell for the groundbreaking Italian still life painter Fede Galizia. Two bidders raised the price for a small painting of a glass compote with peaches, jasmine flowers and a grasshopper, from $1.6m, set 2006 at Christie’s, to $2.4m with premium.

A floral still life by Michaelina Wautier doubled its high estimate when it sold for $471,000; the last time the painting changed hands at auction in 1993, it barely fetched $16,000. Sotheby's

One of the few fireworks of the sale erupted for a beautiful floral still life by the rarely seen Belgian Baroque painter Michaelina Wautier, which was sold by the German SØR Rusche Collection. Fought over by four phone bidders, it doubled its high estimate when it sold for $471,000. According to the databank Artprice, the last time the painting changed hands at auction in 1993, it barely fetched $16,000.

Dutch paintings also fared well, some surprisingly so, such as Banquet of the Gods by Joachim Wtewael from a prominent New York collection. The remarkably well-preserved tiny oil painting on copper sold for $5.9m and will fill a gap in the collection of the Centraal Museum in Utrecht. "Wtewael is famous for these small, mythological works on copper. This work, with a lot of minutely painted figures, is perhaps the best that Wtewael has made. In the extremely detailed brushwork in this format you recognize the master", the museum’s artistic director Bart Rutten said in a statement.

A day prior, Christie’s hosted the season’s only sale of Old Master Prints, a shrinking market. Of 173 offered lots 130 found a buyer, at a sell-through rate of 76%, and realised strong $4.9m. A number of records were set, among them the pristine, never-restored trial print of Albrecht Dürer’s woodcut for The Four Horsemen of the Apocalypse (1497-98). Three bidders propelled it up to $612,500 with premium, doubling the low estimate. As per the past three years, Christie’s will offer Master paintings and sculpture as part of its Classic Week in May.