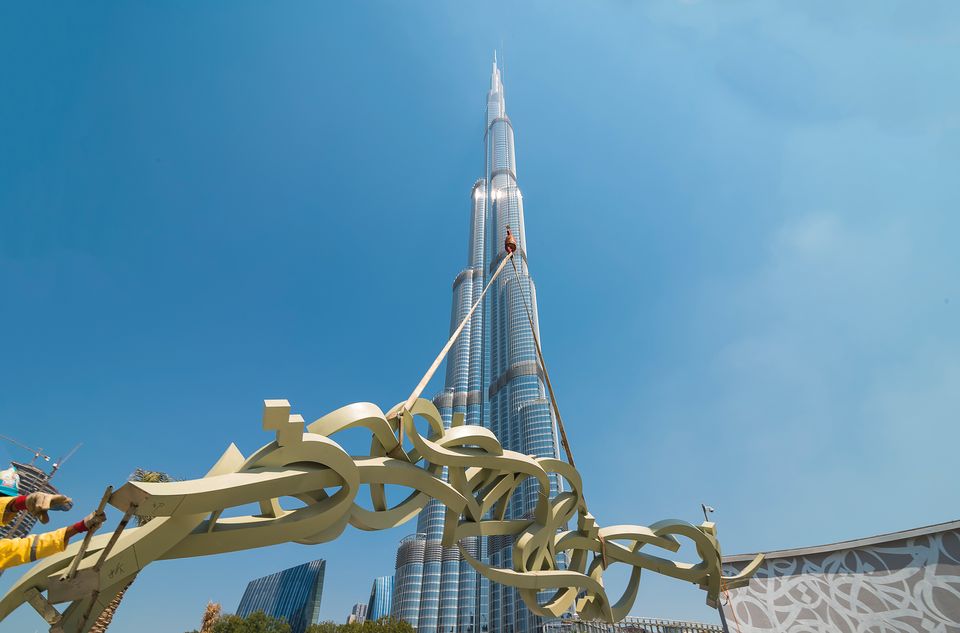 The Dubai-based artist eL Seed, whose work centres on the modernisation and democratisation of the Arabic language, is in the process of installing a large sculpture in the plaza facing Dubai Opera.

The work, a 30m stainless-steel piece, which is due to be rendered bright pink, has been designed to snake along the curved wall opposite Dubai’s premier performing arts venue. Although it weighs 3.5 tonnes, it will appear to be floating once installation is complete (by Friday 23 March).

The words depicted in the sculpture, in eL Seed’s signature looping script, spell out a statement by Sheikh Mohammed bin Rashid Al Maktoum, the vice-president and prime minister of the United Arab Emirates and the ruler of Dubai. It reads: “Art in all its colours and shapes reflects the culture of nations, their history and civilisations.”

The sculpture is an extension of the three-dimensional arm of the French-born artist’s practice, which he developed during his residency at Tashkeel studios in Dubai and displayed in his Declaration show in 2014. That exhibition featured a similar, but much smaller, sculpture, cascading down the gallery walls, based on words by the famed Syrian poet Nizar Qabbani.

“Declaration was an ephemeral installation, but it also signalled a turning point in my career,” the artist says. “This time, I wanted to make something more permanent; it is also important for me to make my mark on the city that afforded me the opportunity to develop my artistic career.”