On The Art Newspaper podcast, we find out about the scandalous faking of signatures helped keep a female painter out of the spotlight 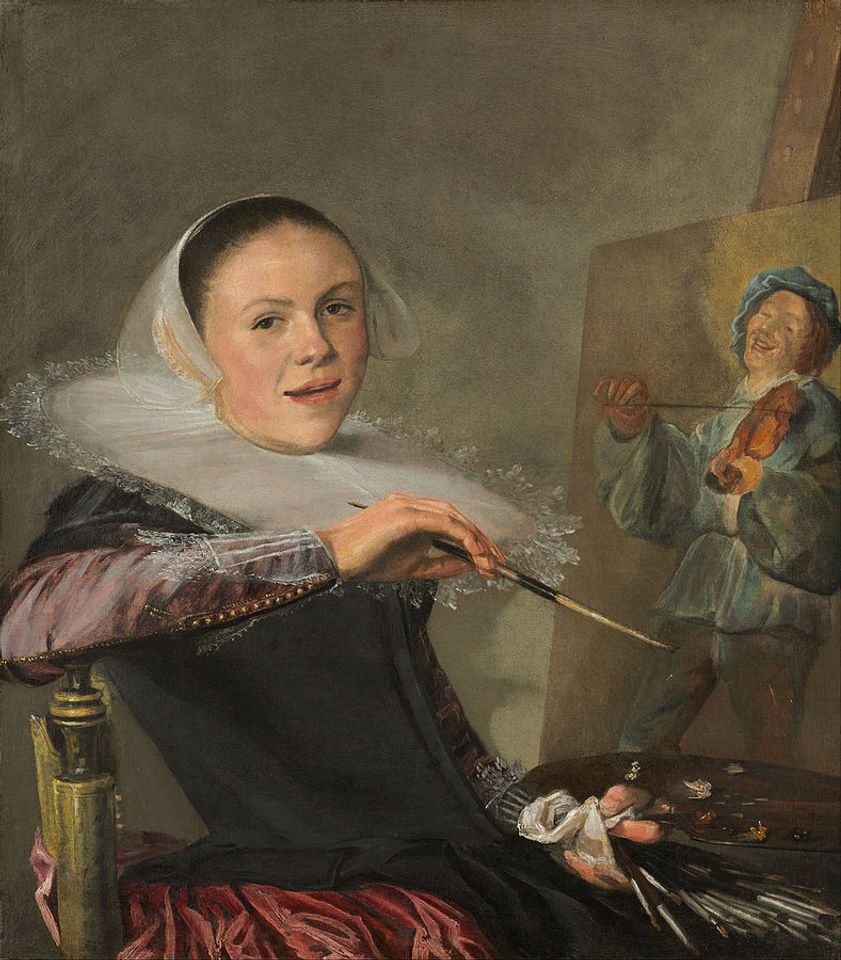 Judith Leyster's Self-portrait (around 1633), part of the collection at the National Gallery of Art, Washington, DC Photo via Wikimedia

Female Old Masters may now be beginning to get the attention they have long deserved, but in the past, art dealers not only ignored them, but tried to erase them. Jordana Pomeroy, a specialist in the subject who is now the director of the Patricia & Phillip Frost Art Museum at Florida International University in Miami, tells The Art Newspaper podcast that works by some women had not just been accidentally misattributed; male signatures had been actively added to their work.

She gives the example of the Dutch 17th-century artist Judith Leyster. “[She] was well known in her time,” Pomeroy tells me on the podcast, “she was part of a guild, which was unusual for women artists. But her signature was literally painted over. By who? Dealers—it’s a question of the market. Her works were promoted as Frans Hals.” Such scandals were, of course, about cash—“reattributing so that you can ask more money for a Frans Hals than you could for a Judith Leyster”, Pomeroy says. “And this kind of thing went on for many, many years, and certainly through my era of expertise, late 19th-century British painting.” She adds that it was scholars who noticed Leyster’s monogram involving a star—“a really beautiful signature”—on works that had been signed with Hals’s name. “And uncovering that literally uncovered her reputation,” she says. That was in the 1890s, but it was not until the 1970s that work began in earnest to reflect the scope of Leyster’s achievement.

Maybe [women artists] weren’t considered geniuses at that same magnitude, but they were included. And it’s us who have subsequently excluded women. Jordana Pomeroy

Pomeroy was formerly the chief curator at the National Museum of Women in the Arts (NMWA) in Washington, DC, and she co-organised the exhibition Italian Women Artists from Renaissance to Baroque in 2007. There was much less scholarship around female Old Masters at that time, so the exhibition was a “fascinating scavenger hunt”, she says. “Because unlike the NMWA, when you go to the Uffizi, you can’t say: ‘Have you categorised your works by gender?’ That—at least at the time that I was doing the research—was not the case.” The scavenger hunt is “the fun part of being a curator”, Pomeroy adds. “It’s not just laid out for you: you have to tell that story, you have to find the works. Finding some of the works on paper was not easy. It was hard to get some of those loans, like a Properzia de’Rossi; it was near impossible.”

Pomeroy notes that the visibility of women artists got a lot worse after the Renaissance and Baroque periods before improving in recent times. One extraordinary fact about the Italian artist Sofonisba Anguissola, for instance, is that she met both Michelangelo, close to the start of her career, and a young Anthony Van Dyck, when she was in her nineties. “Maybe it’s even more extraordinary that they recognised her,” Pomeroy says. “There were so many women artists out there. And part of the ambition with that exhibition and others at the NMWA was to point out that there are many different stories to be told in art history… Maybe it’s not so extraordinary that they recognised these women—they were in their midst. This is, to me, our blindness: that, in fact, somebody like Michelangelo or Van Dyck or anybody else would see that there’s a woman there… Vasari [the Renaissance painter and historian] writes a chapter about women artists. To us the field, we always go to that and say: ‘Isn’t that amazing, that Giorgio Vasari wrote about women artists?’ But now that I think about it all these years hence, I think: ‘Well, why wouldn’t he have written about that?’ Because they were there, and they were extraordinary. Maybe they weren’t considered geniuses at that same magnitude, but they were included. And it’s us who have subsequently excluded women.”

After many years in the field, Pomeroy is gratified to see museums like the Prado dedicating major exhibitions to female Old Masters: a show of Sofonisba Anguissola and Lavinia Fontana takes place in October. But, she says, “it’s changed very, very slowly I have to say. We’re here in the 21st century and I’ve just finished teaching a course on feminist theory, and I thought sadly to myself as I was looking at these students who were all born in this century, that we’re still talking about this. And it doesn’t feel like it’s changed all that much.”

On the same podcast episode, you can also hear an interview with Letizia Treves, the National Gallery in London’s curator of later Italian, Spanish, and French 17th-century paintings, about the museum’s newly acquired and restored painting by the Baroque painter Artemisia Gentileschi, Self Portrait as Saint Catherine of Alexandria (1615–17), which is about to go on a pop-up tour of unusual venues across the UK, beginning with the Glasgow Women’s Library (6 March-19 March). Treves talks in depth about the work in context of Artemisia’s extraordinary life. And the podcast also explores Condo, where London galleries offer up their spaces to galleries from overseas, and ponders wider issues affecting galleries, with the London gallerist Kate MacGarry.

The Art Newspaper Podcast, in association with Bonhams, comes out every Friday and you can also find it on iTunes, Soundcloud and TuneIn.