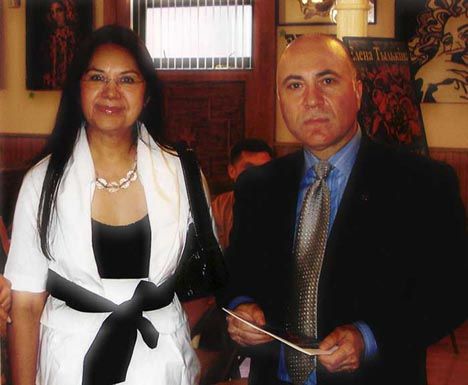 Glafira Rosales, the dealer at the centre of the scandal and her lawyer, Anastasios Sarikas Photo: Yelena Tylkina

Glafira Rosales, the art dealer at the centre of the scandal that has embroiled both the now defunct Knoedler gallery and its former director Ann Freedman, was indicted by a federal grand jury in New York on 17 July on charges that she sold Knoedler and another gallery more than 60 paintings that were fake, that she knew they were fake, and that the statements she made about their authenticity and provenance were false.

These allegations fall under US statutes concerning money laundering and wire fraud, which are the formal charges in the criminal indictment.

Rosales’s criminal attorney, Steven Kartagener, did not respond to inquiries. After her arrest in May, he told the New York Times that Rosales “intends to defend herself... and is confident that when all the facts become known she will be vindicated”.

Neither Knoedler nor the second gallery is identified by name in the indictment. The ultimate purchasers of the works from the galleries are also not named and are referred to as Rosales’s “victims”.

According to the indictment, from about 1994 to 2009 Rosales “engaged in a scheme to sell dozens of works of fake art” by leading Abstract Expressionists, including Jackson Pollock, Mark Rothko, and Robert Motherwell, which “were never before exhibited and previously unknown”. She told the galleries they were authentic, when “in truth and in fact, and as Rosales then and there knew, the "Rosales Works" were fake and were not by the hand of the artists that Rosales claimed that they were,” the indictment alleges.

She also lied to the galleries about the works’ provenance, saying that some came from a Swiss client, “who did not exist” and a Spanish collector “who never owned any of the Rosales Works,” according to the indictment. She made these statements, the indictment alleges, “with the knowledge and intent that they be repeated to purchasers and potential purchasers,” and these “fraudulent statements were material” to those purchasers.

If convicted, Rosales could face 20 years each on the money laundering and wire fraud charges and additional years on the tax charges. The government is also seeking forfeiture of all assets that can be traced to the sales.

Rosales is currently a defendant in several civil suits, along with Knoedler and former director Freedman, brought by art collectors who allege the defendants knowingly sold them fakes. Rosales, Knoedler and Freedman have consistently denied wrongdoing. At the time of publication, their attorneys had not responded to inquiries.