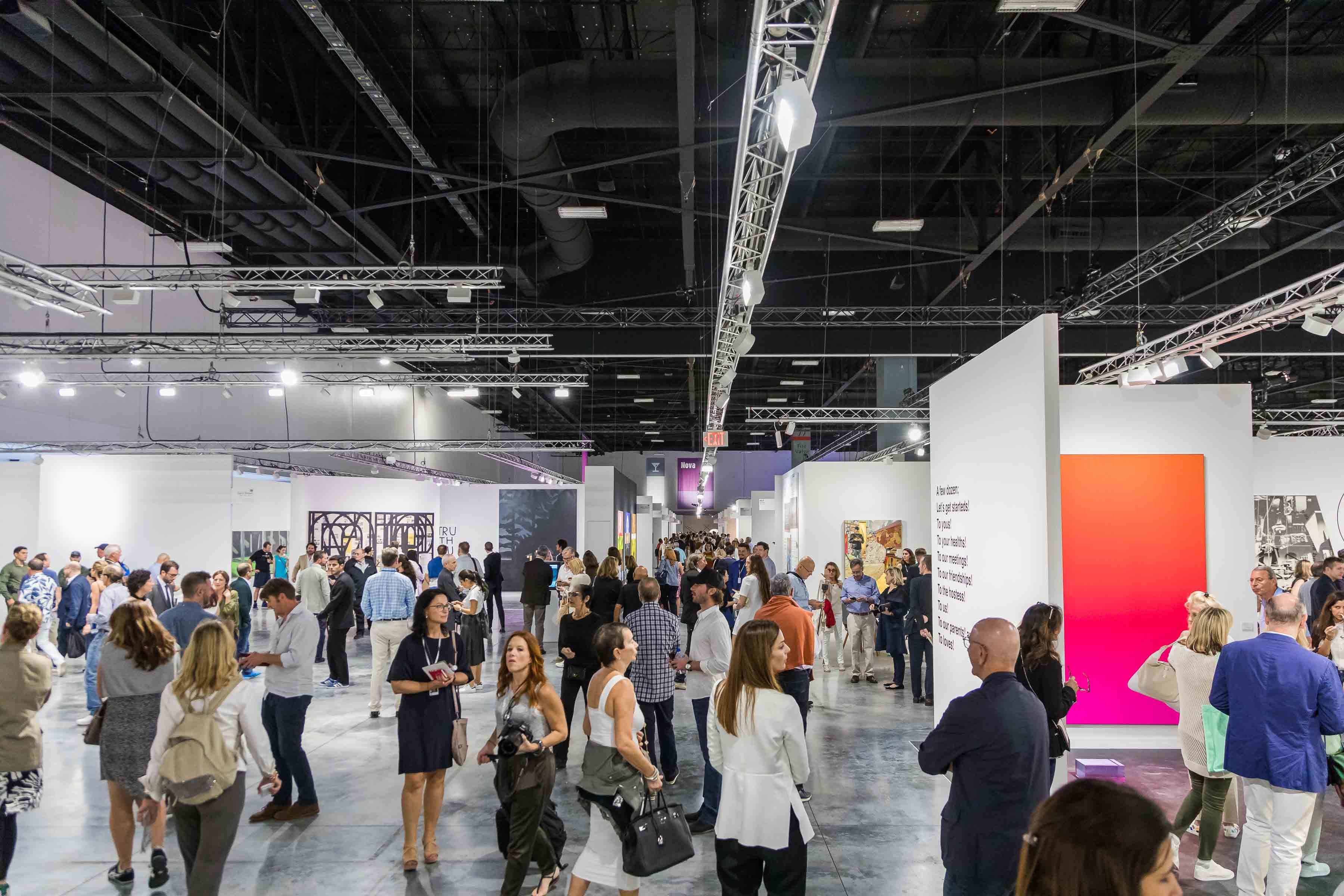 Some galleries think large crowded fairs, such as the recently cancelled Art Basel in Miami Beach, may not return next year Courtesy of Art Basel

Art sales dropped by an average of 36% in the first half of 2020, forcing dealers to cut their staff by a third, while 2% of galleries have closed permanently—a figure that is likely to grow significantly as rent relief dries up and economies tip into recession. So finds the first bellwether report on the impact of Covid-19 on the gallery sector, published today by Art Basel and UBS.

But it is arguably art fairs that have been the trade’s biggest casualty—Art Basel cancelled its third fair of 2020, in Miami Beach, only last week—and the new report, authored by the economist Clare McAndrew, casts doubt on their resurgence in 2021.

According to the survey of 795 contemporary and Modern art galleries, 91% of dealers predict art fair sales will not improve in the second half of 2020. Crucially, only one third think they will increase in 2021. “There is evidence of a potential knock-on effect of the pandemic for art fair participation in 2021,” McAndrew says, who also notes that most collectors are not planning to travel to art events until the second half of 2021.

That knock-on effect is already being felt in Australia, where the Melbourne Art Fair, due to be held in February, has been postponed until 2022. “Far too many uncertainties remain to go ahead as planned next February,” says the fair’s director, Maree Di Pasquale. An intrepid few are bucking the trend: Cosmoscow is due to go ahead in Russia later this month and 1:54 contemporary African art fair is still forging ahead in London in October. Meanwhile, the jury is still out on Fiac opening in Paris next month (an announcement is expected later this week).

But, even as scientists race to find a vaccine for Covid-19, dealers say they will reduce the number of fairs they do next year, according to the Art Basel/UBS report. On average, galleries will drop from four fairs in 2019 to three in 2021. Dealers with a turnover of more than $10m say they will downsize from seven fairs to four next year.

Travel restrictions and inflated shipping costs are key considerations, while, for others, the impact on the environment is a major factor. The London dealer Kate McGarry she says she will now only apply to fairs that she can travel to by train. “If fairs go ahead in 2021, I’ll do two to three maximum,” she says (having done around three a year in the past). “Fairs are likely to have to shrink in the coming years and I welcome that. I am excited to have people back in the gallery as a benefit [of fewer fairs].”

In 2019, art fairs were a major source of income, accounting for nearly half (46%) of gallery sales. However, fairs also accounted for 29% of dealers’ expenditure—higher than payroll or rent. McAndrew says dealers are increasingly looking to alternatives such as gallery weekends. She says: “Dealers want the programme, the dinners, the events that go with a fair without the actual trade centre. With gallery weekends you can do that in a socially distanced way.” One such recent success is Chart art fair (usually held in Copenhagen), which operated a “de-centred format” last month, taking place in galleries across the five Nordic capital cities.

Significant strides have also been made in online sales, a much-needed “lifeline” for galleries, McAndrew says—although a quarter of those surveyed made no online sales at all this year. Online sales rose from 10% of total sales in 2019 to 37% in the first half of 2020. The majority of sales were made from galleries’ own websites and, to a lesser extent, third-party platforms including the increasingly ubiquitous online viewing rooms (OVRs), which have replaced fairs.

Unsurprisingly, millennial collectors, accounting for nearly half of the collectors surveyed, say they are more comfortable buying at higher prices online: 16% commonly purchasing over the $1m threshold. Nearly a third of collectors (32%) bought a work of art via Instagram.

Art fairs need to survive too, and Art Basel is introducing a $5,000 flat fee for dealers to show in its online viewing room later this month. Marc Spiegler, the global director of Art Basel, says there has been “no resistance” to the monetisation of online viewing rooms. “Most galleries are quite vested in our success,” he tells The Art Newspaper. “I don’t think any galleries would expect us to perpetually do things for free and sling our entire VIP programme and marketing into action permanently for free.”

This online iteration of Art Basel, launching 23 September and dedicated solely to works made in 2020, is far smaller than previous attempts (only 100 galleries down from around 280) and is shorter at three and a half days. “It’s less like an attempt to replicate the dynamics of a fair online and more like a cross-pollination between a pop-up store, an auction and a streetwear drop,” Spiegler says.

Having had to cancel all three of its editions this year, Spiegler is optimistic about Art Basel’s Hong Kong show going ahead in March 2021. “Our assumption is it will happen—if you stop working on it, it won’t happen,” he says. “Fairs have surprisingly long lead times—you have to do the selection process, you have to lock in the venue and various forms of contractors. But then you have to see how the situation develops as the event approaches.”

Crucially, Spiegler believes, the appetite is there: “We’ve gone from a situation where a lot of people were talking—often quite exaggeratedly—about fair fatigue, to the point where everyone is desperate to start travelling and going to fairs again.”

However, the economic fallout from this pandemic is likely to extend well into 2021 and beyond, with far-reaching consequences for the trade. As McAndrew notes: “Depending on how long the various phases of this crisis last, the supports provided and obtained, and how deep and protracted the recession is that follows, 2020 may display unprecedented resilience or permanent change to the landscape of the art world as we know it.”