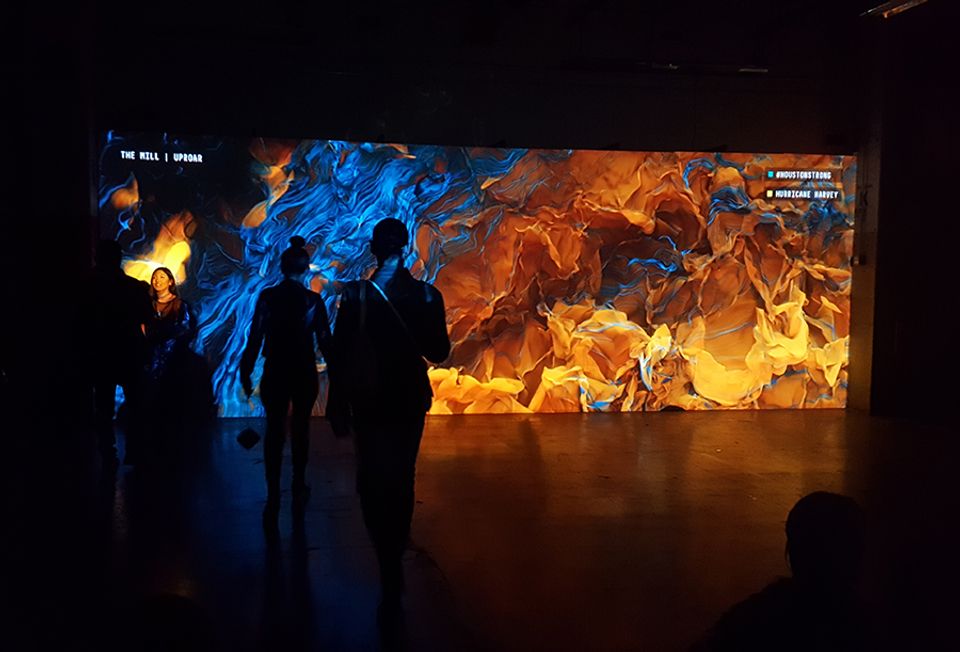 The Mill, Uproar (2017) at Day for Night Victoria Stapley-Brown

While musical acts like Nine Inch Nails, Solange and Radiohead’s Thom Yorke might have taken most of the spotlight at this year’s Day for Night, a music and art festival in Houston, Texas (15-17 December), the visual art on offer was just as attention-grabbing. Here are some highlights of the newly commissioned works unveiled in the city this weekend.

Uproar, by The Mill; project directed by William Arnold and Kinda Akash

When the New York-based artists Kinda Akash and William Arnold of the creative agency The Mill set out to make a work for the festival, “it was always going to be kind of trippy and abstract and a little bit mysterious”, Arnold says. But they wanted “meaningful information or data to drive this abstraction”. “It seemed like we had to do something that was Houston-related and something that was [Hurricane Harvey] related,” Akash says, and also to “contextualise it within human response”. The result, Uproar, is a painterly video projection that depicts two types of data from a four-day period that unfurled across the screen: meteorological information from Harvey—a mix of wind, precipitation and accumulation of rainfall, which is rarely visualised at once—in changing shades of yellow; and tweets and re-tweets of #Houstonstrong in blue, which trickles in and grows. “Just the range you have within those yellows—it’s kind of alluring and it’s like this weird meditation on the forces of nature,” Akash says. 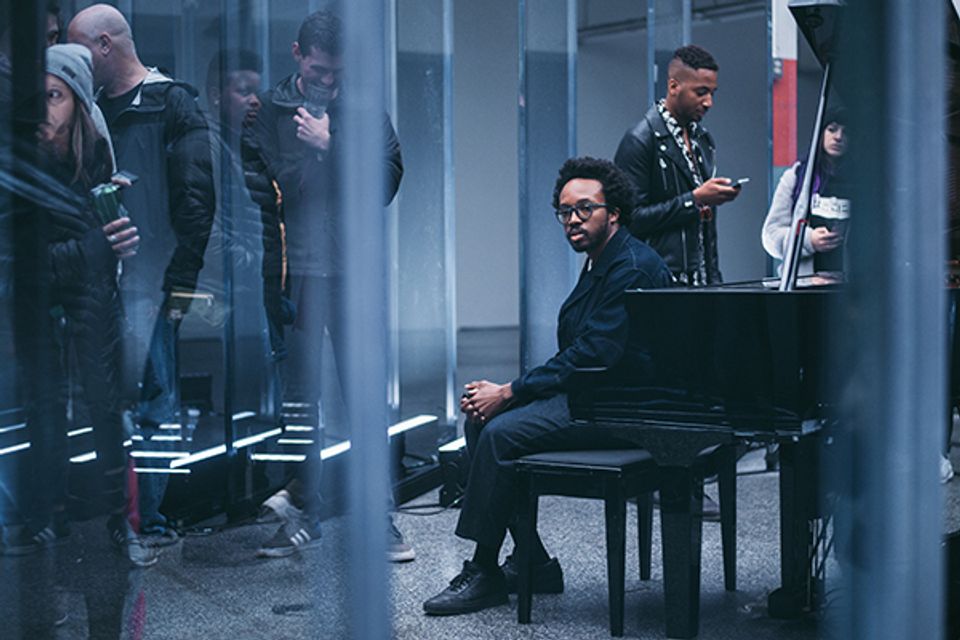 The New York and Chicago-based artist Ekene Ijeoma decided to “use the Star-Spangled banner, deconstruct it, and talk about the story of mass incarceration and the black experience through that” for his installation Deconstructed Anthems, he says. In the work, a player piano repeats the US national anthem 15 times, using custom software to remove notes in proportion to the sharp hike in mass incarceration in the country from 1925 (around 91,000 people) to the present (around 2.3m people—with African Americans incarcerated at five times the rate as Caucasians). The piano sits in a square pen of slanted glass sheets, resembling a prison cell, which visitors can enter. The lights dim during the silent moments and make visitors’ reflections more visible. “I think even if you didn’t know that this was about mass incarceration, you could hear [the anthem] just being deconstructed and sort of relate it to whatever you think is wrong with the American Dream right now,” Ijeoma says. During live performances this weekend, the piano was replaced with with a trio of musicians playing a live jazz version of the anthem, and one visitor walked away in tears, Ijeoma says.

Lina Dib's interactive installation Threshold, referencing both the beauty and pollution of the Gulf Coast, is "playful and sad at the same time", she says #dayfornight #art #houston #installationart #texas

From a distance, the Houston-based artist and anthropologist Lina Dib’s interactive sound and video installation Threshold seems to be a straightforward video projection of Surfside beach on Texas’s Gulf Coast, with the lulling sound of crashing waves. But move closer to the image, and your silhouette, motion and proximity to the screen are detected by sensors that slow down and desaturate the image, bringing it “almost at a standstill”, Dib says. When you step back again, the image, made by ultra-short throw projectors to cast minimal shadows, speeds back up. The work “is really playful and sad at the same time”, says Dib, as it references the increasing toxicity of the water, especially after Hurricane Harvey. “I love watching people play in my work… to me that’s really important because that’s what cracks open this kind of creativity so people can really engage. My goal is not to scold us all as humans, but really to say this is our world, and to feel a sense of being encompassed in it.” Dib has already discussed showing the work at other venues, including at the Galveston Arts Center and a venue in Stockholm.