In Nigeria, art is spreading the word about police brutality 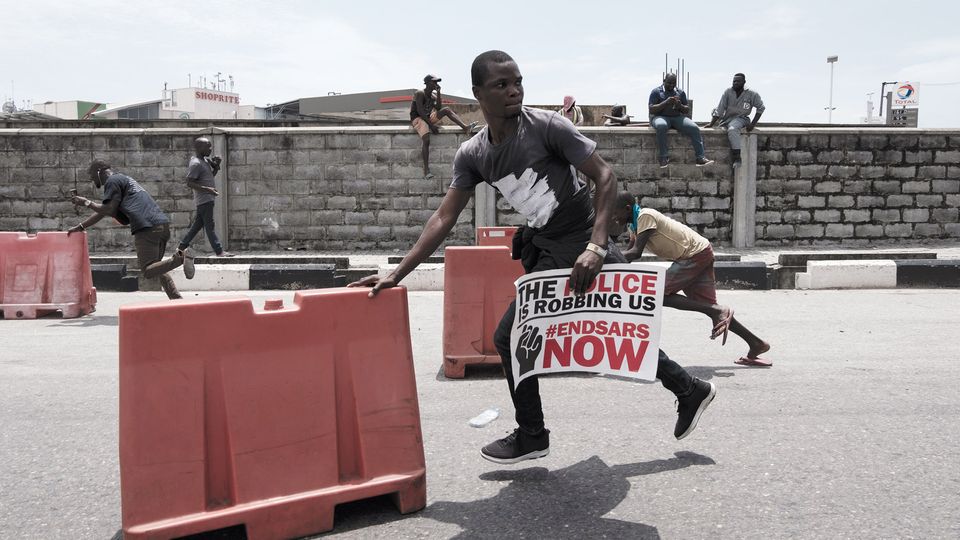 Nigeria’s #EndSARS movement against police brutality has generated more than 150 mass protests in cities across the country over recent weeks, with demonstrations intensifying after Special Anti-Robbery Squad (SARS) federal police reportedly fired live rounds and used brute force on protesters at the Lekki toll plaza in Lagos on 20 October. The movement has prompted solidarity protests around the world, including in London, New York, Berlin and Washington, DC.

In an effort to draw global attention to the issue, visual artists across Nigeria created protest art spanning photography, video, illustration and painting at an unprecedented rate. Their work highlighted how and why many young Nigerians were fighting simply for the right to live. Many of these artists put their own safety in jeopardy to make these works and now, according to some, are at risk of being exploited by the art market.

According to the independent curator, educator and researcher, Gabi Ngcobo, who organised the 10th Berlin Biennale in 2018, works that feature black pain are particularly appealing to wealthy, largely Western, art buyers. “That’s how they think of black bodies, in pain or in struggle of some sort. We’ve been trained to glorify the struggle,” she says.

Some of the works borne out of protest will be shown in a non-commercial digital exhibition, New Nigerian Studios, at Art X Lagos, West Africa’s largest art fair. Featuring 100 images and videos from 50 artists, the presentation is the result of a call to artists for protest works put out by the fair’s leadership after the event was postponed from 6 to 15 November until 2 to 9 December, out of solidarity with the protesters, according to the fair organisers.

“This year we are forced to respond in the midst of the upheaval,” Tayo Ogunbiyi, the curator of the exhibition, says of the last-minute addition. “It forces us to prioritise our social responsibility to the cities and communities we are in. It forces us to take decisions that consider the state and wellbeing of these communities in all that we do.”

The fair provided resources to the selected artists to offset the financial costs and risks of documenting the protests. Other arts organisations, such as the African Artists’ Foundation (AAF), have deployed teams to attend the protests daily, supporting photographers on the ground by providing a truck with first-aid kits, refreshments and battery charging points.

We’ve been trained to glorify the struggle Gabi Ngcobo

Ogunbiyi is reluctant to describe in detail how exactly the fair supported photographers, as this could potentially be interpreted by the Nigerian government as sedition. Also, Art X Lagos is sponsored by Access Bank, a bank accused of freezing the account of Gatefield Nigeria, a public affairs company that was funding journalists reporting on the protests, for which Access is being sued.

As protest sympathisers risk retaliation from pro-police groups, artists are likely to be targeted in public by the rogue SARS police unit—accused by citizens of extortion, assault and extra-judicial killings without accountability—which regularly profiles people thought to dress in expressive, seemingly libertarian, clothes.

Nevertheless, artists took to the streets. “I feel a responsibility to get the message across to the world… to make this material available to people in the next ten or even 50 years,” says the artist Stephen Tayo of his decision to attend the protests. Known for his fashion and portrait photography, Tayo had to adapt his style to show the scenes, instead of people, wary of his photographs in effect putting targets on protesters’ backs.

Musa Ganiyy, a painter and illustrator who satirises prominent members of the government believed to be complicit in oppressing protesters, is also taking great care. “With the various arrests and illegal autocratic actions that are being taken across the nation, I am scared. [At the start of the protests] I was cautious of how vulgar or outspoken I [was],” he says. But once he was commissioned to create works documenting the political situation, “I just went ahead without any fear because it just felt like the right thing to do in my own power”. 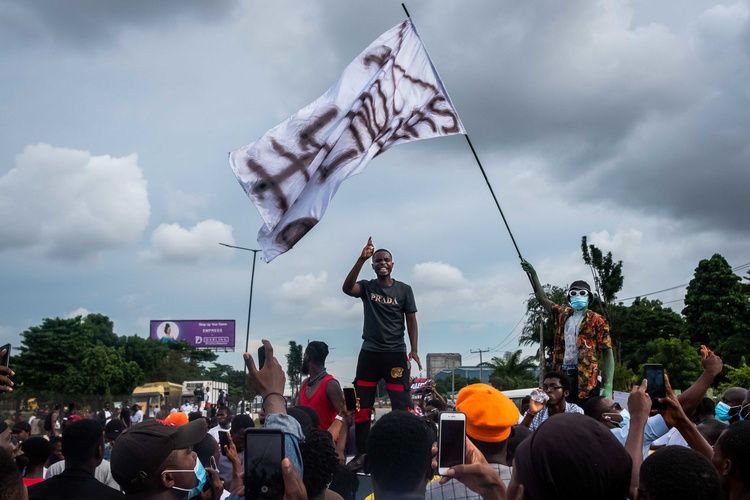 One of the protest images on view at Art X Lagos. Bernard Kalu

Many artists’ protest works, such as Ganiyy’s and Tayo’s, are reminiscent of resistance art from South Africa in the 1980s—mostly representational, directly documenting events, and archival in nature—which helped convey information and build political consciousness in the fight against apartheid. They also feel familiar, coming to global consciousness only a few months after Black Lives Matter protests against police brutality in the US spread across the world. The significance of these works in Nigeria cannot be overstated since the government continues to deny that it ordered its military to shoot and kill peaceful protesters, even though there is plenty of evidence to the contrary.

But how these works are shown and in what context in the future—and whether their exhibition honours the tragedies and egregious events that spawned them—could prove a point of contention between the market and the artists’ intention.

Works created by Nigerian artists in this fraught time will likely be sought after because of the well-documented surge in attention paid to Black artists by Western institutions that are frequently accused of excluding them. The commercial art market especially is also known to have a large appetite for works by Black artists lately.

Earlier this year, the Ghanaian artist Amoako Boafo’s painting The Lemon Bathing Suit (2019) sold at Phillips in London for £675,000—more than ten times its estimate and more than 30 times what the seller had paid for it less than a year earlier. An online selling exhibition at Christie’s held in August, Say It Loud (I’m Black and I’m Proud), required buyers to sign contracts that prevented them from reselling the works at auction for at least five years to prevent profiteering by “flipping”.

“What I think would be ideal is to follow the same path of protest, which is a public event made in a public space,” says Iheanyi Onwuegbucha, a curator at the Centre for Contemporary Art, Lagos, proposing that the #EndSARS protest works stay off the commercial circuit. He says “[A public presentation] is more inclusive than a gallery or biennale exhibition”, whose audiences are more limited, wealthier and less likely to materially benefit from the knowledge these works share.

But when it comes to the larger issue of devaluing works that focus on Black trauma in the predominantly white art market, Ngcobo echoed the South African judge and activist Albie Sachs and academic Njabulo Ndebele, explaining that art must not necessarily be a weapon against struggle. She recommends that artists rediscover “the ordinary, the normal” and find ways to talk about what needs “fixing” without exoticising pain that goes beyond the present struggle while avoiding the trap of developing “products” for the market.

“Of course, it is the role of artists to reflect the times,” she says, adding: “But for me, it’s the language, the grammar of how to inhabit those times that matters.”