In the Giardini: five to see in Okwui Enwezor’s All the World’s Futures

The Biennale director's critique of capitalism is elegant and sleek

In his interviews in the weeks before the Venice Biennale opened to invited guests and press today, 5 May, director Okwui Enwezor promised the most politically oriented Venice for years. Speaking on the roof terrace at the Ca’ Guistinian yesterday he discussed the difficulties of installing his exhibition All the World’s Futures in the Palazzo delle Esposizione in the Giardini. “It’s an essentially Classical space, it is what it is, there are limits to what you can do with it”, he said. Despite this he said he had transformed the central gallery of the pavilion to a theatrical space dedicated entirely to polemical readings, including, as widely reported, Karl Marx’s Das Kapital. Surrounding that, he added, would be a “dim sum” of artistic presentations.

Much of the show is indeed a criticism of late modern capitalism served up in a coolly elegant, even sleek, style (though many of the works are troubling under the surface). Around the central Arena, individual artists, pairs and trios of artists are given their own presentations, flowing one to the other. What is immediately apparent is the number of less well-known artists, many born outside Europe and America, “rediscovered” older artists and women artists on display. 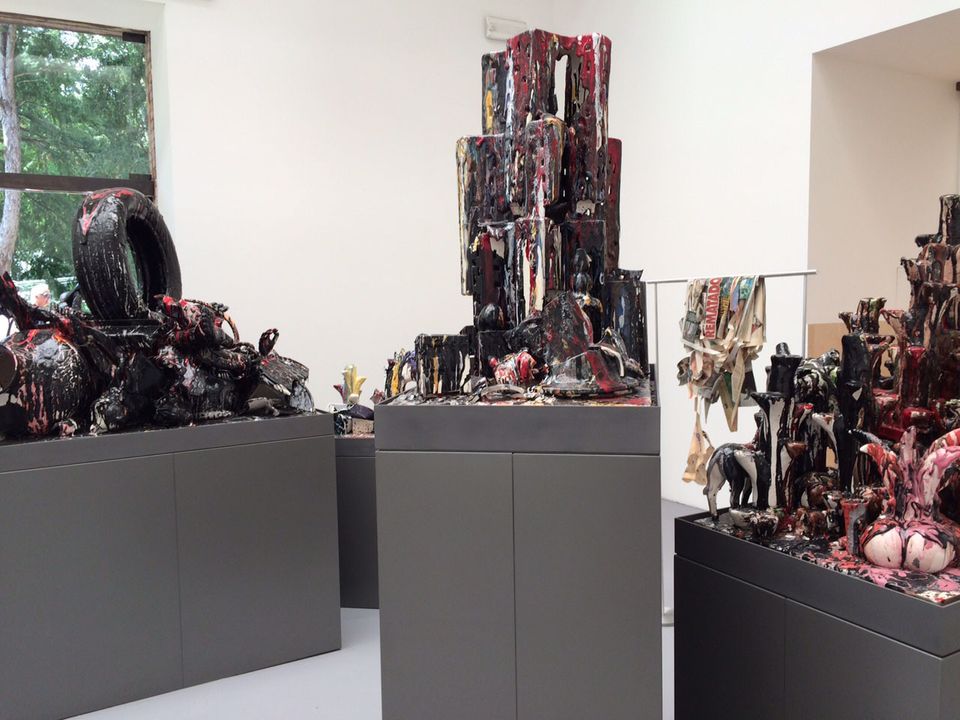 There is beauty in violence. Throughout the central exhibition at the Giardini, some of the most compelling works are those that brutalise the imagination. In Christian Boltanski's film L'Homme qui tousse (1969), at the start of the exhibition, a man sits alone on the floor of a darkened room and vomits blood while convulsing. An installation of recent ceramic sculptural works by Walead Beshty includes a gripping front page newspaper photograph of a murdered man, naked from the waist up, his face covered in blood. The final work in the show is John Akomfrah's gorgeous three-channel video, Vertigo Sea (2015), pairing sweeping images of oceans and the Arctic with sickening documentary footage of whaling and polar bear hunting.

These works mimic the violence of capitalism, which is a key aspect of Enwezor's show. But how do we deal with the beauty of violence? These pieces are hard to turn away from because they are aesthetically appealing in a way that much of the show, in its conceptual coolness, is not.

Workers as units of production Jeremy Deller, Hello, Today you have a day off, 2013 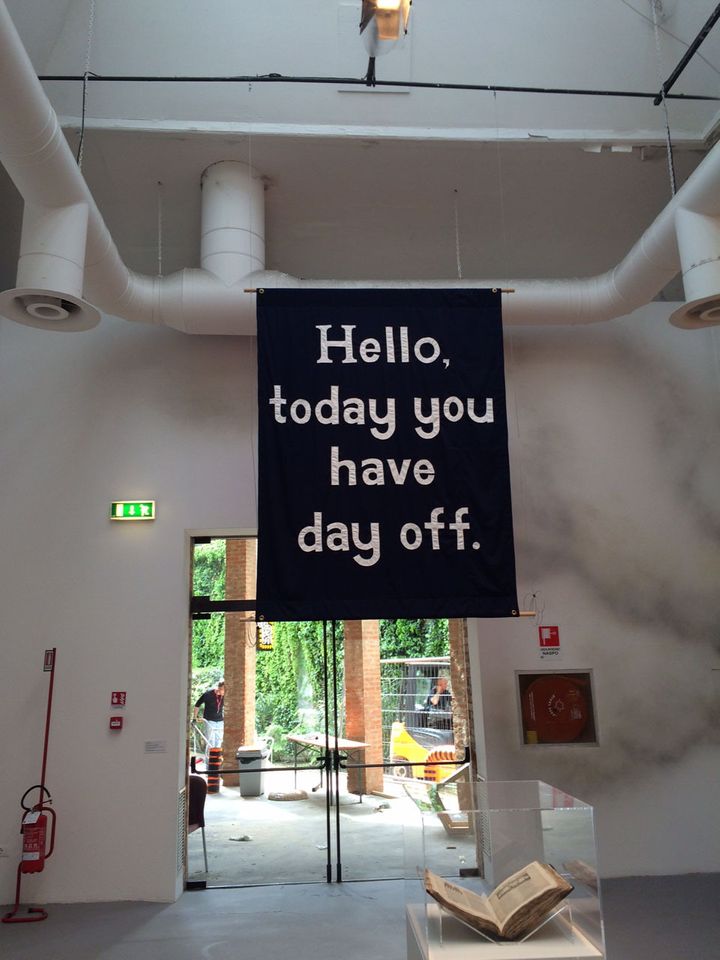 The reading of Karl Marx's Das Kapital is a fitting prelude to the viewer's encounter with the works by Jeremy Deller, who filled the British pavilion at the 2013 Biennale, and Walker Evans, the 20th-century US photographer famous for documenting the effects of the Great Depression.

Though separated by time and geography, their projects both speak of the ills inflicted by capitalism on the working poor.

Deller's work includes archival photographs of anonymous, exhausted women workers in a South Wales ironworks taken during the industrial revolution, which he has irreverently titled The Shit Old Days. Next to these small, faded but touching images of poverty hangs a giant fabric banner with the words Hello, Today you have day off (2013), which he took from an automated text message recently sent to a zero-hours contract worker to tell him his services would not be required that day.

Evan's series of photographs, taken from his famous 1936 book Let Us Now Praise Famous Men, made in collaboration with James Agee, are just as beautifully presented as Deller's, though without any hint of arty sarcasm. Bleak and dishevelled children and mothers and dust-covered workers stare out from elegant black frames. 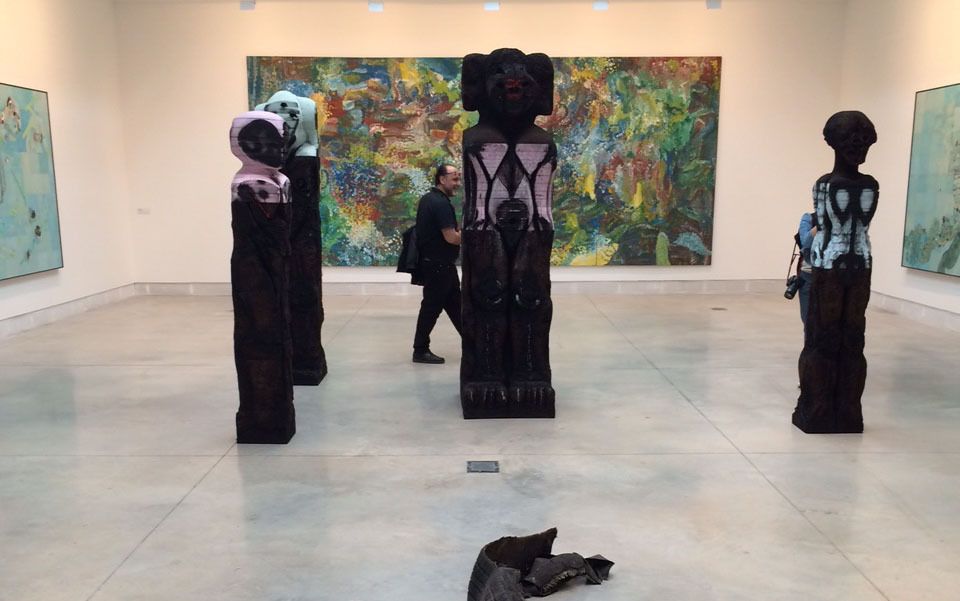 So there are some superstar white male artists in the show (Andreas Gursky, Hans Haacke, for example) but they are few and far between. Enwezor is clearly using his platform to draw the attention of the biennale crowd away from art market darlings (Oscar Murillo makes a surprise appearance) to lesser-known artists, from Africa, Asia and Latin America or their diaspora. A key room in the exhibitions places paintings by the Irish African American artist Ellen Gallagher, with a twisted, burned out tyre sculpture, Atlas (2015), and wooden totemic figures by the Pakistan-born Huma Bhabha. A large painting by the late Australian Aboriginal Emily Kame Kngwarreye, Earth’s Creation (1994) completes the presentation. 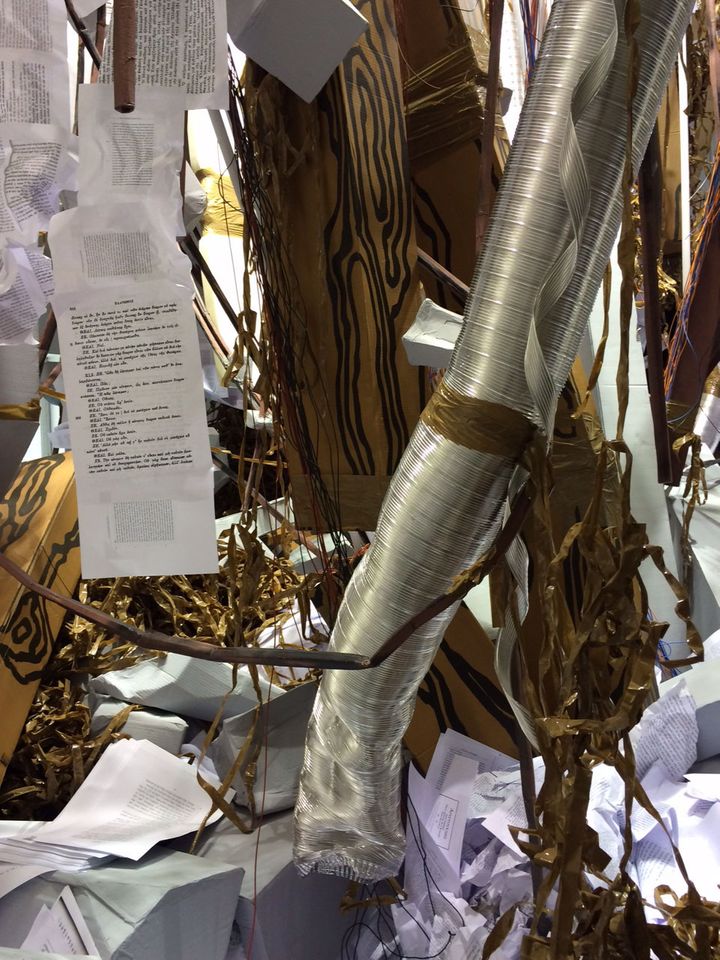 Although much of the work on show is controlled, conceptual, monochrome, or archival, Enwezor has punctuated the display with some crowd-stopping installations and videos. He starts with a dramatic presentation of sculpture by Fabio Mauri under the pavilion’s fresco-covered dome. A new site-specific work by the Swiss-born, Paris-based artist Thomas Hirschhorn apparently bursts through the roof of one gallery of the pavilion. A riot, almost jungle-like, of packing tape, insulation ducts and wire, fills a gallery, with discarded copies of Plato’s treatises scattered at its roots. An actual tree (no biennale or art fair is complete without one) this time by Robert Smithson, enlivens a gallery of works on paper.

Back to school Das Kapital, readings and discussions in The Arena 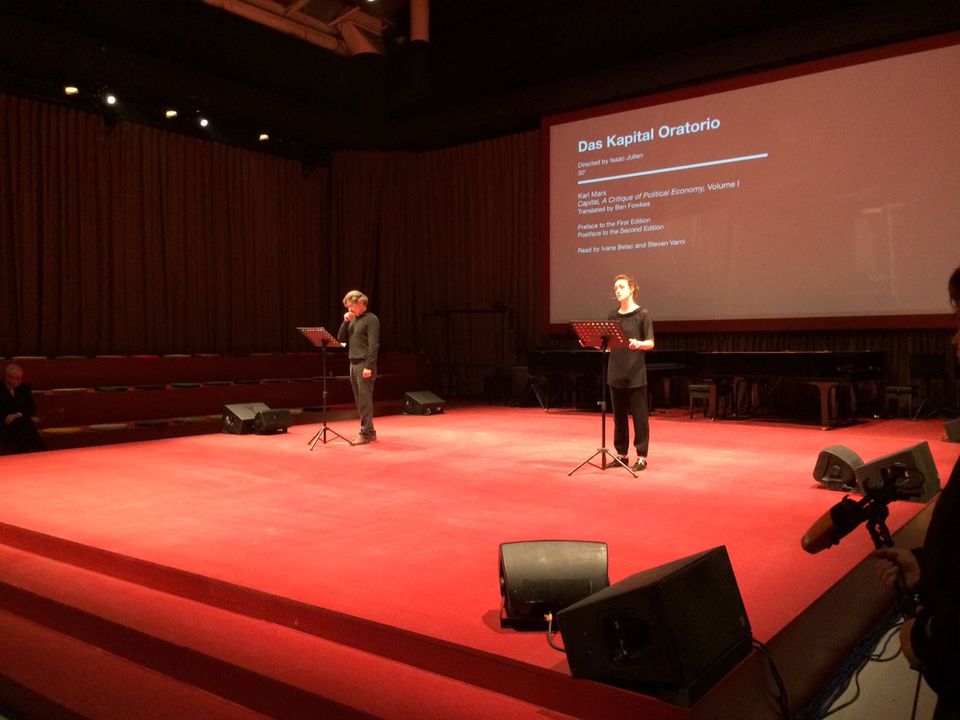 A reading of Das Kapital in All the World's Futures

As clearly intended by Enwezor, it is impossible to navigate from one side of the pavilion to the other without passing through The Arena, a large performance space with seating on two levels. Throughout the biennale it will be used for readings of Marx’s Das Kapital (all three volumes, probably read through twice over the months of the biennale) as well as other readings, lectures and debates. This is not the only overtly didactic work on show: from Hans Haacke’s World Poll (2015), Alexander Kluge’s philosophical and political videos, to Rirkrit Tiravanija’s Demonstration Drawings (2015), there is no escaping the fact that viewers are expected to be politically engaged. Isaac Julien’s KAPITAL (2013) even includes a lecture by anthropologist David Harvey, to some of the art world’s leading directors (the Hayward’s Ralph Rugoff can be seen listening attentively). Whether the art world (with it’s close connections to the 1% of the 1%) will pay attention or simply feel like naughty schoolchildren who then run off to the yachts and parties, remains to be seen.