Art schools are at a crossroads as student numbers boom, tuition fees soar and traditional assumptions are challenged.

The school attracted some of the best artists of its time. It skirted boundaries of race, class, age and creative occupation. It advocated learning through doing and the belief that art is vital to democracy. Students and teachers worked closely together; some stayed for weeks, others for years. Embracing both technical rigour and free experimentation, the school left a permanent mark on art history.

Black Mountain College (1933-57), near Asheville, North Carolina, was an idyllic place with an outsized cultural impact. If only the same could be said of art schools today.

Nine decades after the first MFA programmes were established at US colleges, advanced art education is ripe for a reappraisal. How healthy, on balance, has it been to bring art into the university? Are current training methods the best ones? And—in a timely question that will be explored on Saturday, in Art Basel in Miami Beach’s Conversation series—how should art schools prepare graduates for an increasingly complex, globally dispersed, market-driven art world?

Two moods permeate art schools these days. On the one hand, it has been a year of spectacularly unpleasant news. Leading institutions have suffered controversial changes in leadership, raking up painful questions about mission and governance. At the University of Southern California in Los Angeles, the whole student body walked out in protest over heavy-handed management and donor influence. Elsewhere, financial distress looms. London’s Cass school, fondly known as the “Aldgate Bauhaus”, which is part of the struggling London Metropolitan University, may see its home turned into luxury flats and its students and faculty uprooted.

On the brighter side, attendance is soaring. More than 200 MFA programmes are minting new artists around the US, and the model is spreading. Galleries are signing art students as feverishly as Wall Street is hiring finance graduates. Innovative projects are injecting energy inside and outside the system. Meanwhile, the information age has turned art schools into feeders for a vast digital-entertainment complex. The most desirable trait of today’s workers, we are often reminded, is their creativity.

Beyond the studio-gallery system

As art schools feel their way forward in this rapidly changing environment, they confront four challenges.

First, and most urgent, is tuition, especially in the US. A typical MFA graduate is sandbagged with tens of thousands of dollars of debt. “Bar none, the biggest problem in teaching art right now is the cost,” says Jon Kessler, a professor of art at Columbia University. Not only do exorbitant costs limit access, but debt pushes artists toward “safe” work and career choices.

A related concern is bureaucracy, especially at large universities. Layers of administration can stifle the flexible atmosphere in which creative risk-taking thrives. Academic life is all too often distracted by turf squabbles and navel-gazing. Puncturing the silos isolating the arts from the humanities and sciences has, by and large, proved elusive.

A third conundrum is sorting out what to teach. According to the MacArthur Foundation, 65% of today’s elementary school students will end up in jobs that have not even been invented yet. What, then, will it mean to be an artist later in the 21st century? And what of the majority of graduates who will not go into the studio-gallery system? “We have absolutely no idea which media, skills or techniques tomorrow’s artists will use,” says Nicolas Bourriaud, the recently dismissed head of the École Nationale Supérieure des Beaux-Arts, in Paris.

Finally, art schools need to find their footing in relation to the art world. An honest case could be made that the school should remain a sanctum of pure curiosity and learning before artists are sent out into the “real world”. But today’s art graduates will step into a labyrinthine institutional and market system, where they must function as multi-tasking, self-promoting, independent entrepreneurs.

For the most part, art “programmes are at a loss when it comes to preparation for the real world”, says the artist Sanford Biggers. Workshops on professional survival skills, when they are offered, sit on the edges of the curriculum. And it is far from clear what exactly is needed. “Even the minority who aspire to the world of Artforum have to navigate local scenes,” says Howard Singerman, a professor of fine arts at Hunter College, New York. “They work in the art world in Madison, or Boulder, or San Francisco.”

Meanwhile, assumptions around art practice are shifting. If previous generations saw themselves as being in opposition to “the system”, many younger artists no longer regard “business” as a dirty word. They seek to master the status quo to advance their own creative or political agendas.

On 13 May 1960, Marcel Duchamp—coincidentally rated the “most influential artist” in a 2006 poll of art students conducted by The Art Newspaper—was invited to Hofstra College in New York for a symposium titled Should the Artist Go to College? He offered a prescient explanation of why artists should be trained to function inside a modern society. They should integrate, he said, to offer an antidote to empty commercialism.

Today’s artist, Duchamp said, “finds himself facing a world based on brutal materialism, where everything is valued in the light of physical well-being and where religion, after losing much ground, is no more the great dispenser of spiritual values”. Thanks to education, however, the artist “will possess the very tools that permit him to oppose this materialistic state of affairs”.

“It goes without saying that to fulfil such a mission,” Duchamp concluded, “the highest education is indispensable.”

• András Szántó is an author, a cultural consultant and a frequent moderator of Art Basel Conversations 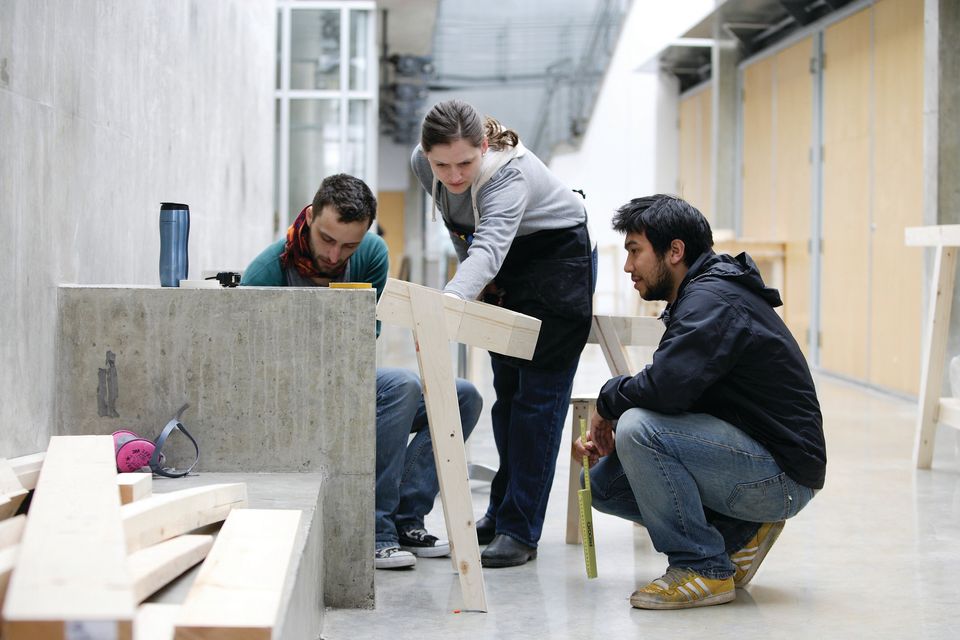 Graduates need to be independent entrepreneurs who can multi-task and self-promote. Photo: Jeff Vinnick

Art training is not standing still. Renowned schools are innovating and new initiatives are sprouting around the old system.

• In Berlin, the artists Angela Bulloch, Simon Denny and Willem de Rooij are initiating the Berlin Program for Artists “to bring young artists into contact with more established colleagues”. In January 2016, ten mentors will invite younger counterparts to participate in meet-ups over six months—one meeting with each mentor. Students will attend free of charge.

• In London, six new scholarships were recently established for refugees and asylum seekers at Goldsmiths, University of London. In addition to the £140,000 earmarked for the initial scholarships, the school is “developing an ongoing academic response to this terrible crisis”.

• At the brand-spanking-new Art Institute at the Fachhochschule Nordwestschweiz in Basel, Switzerland, students indulge in curriculum-free learning and close faculty interaction. Overseen by Chus Martinez, projects such as the Next Society put students in dialogue with scientists and thinkers.

• At the Rhode Island School of Design, in the US, students and staff from the school and neighbouring Brown University teach, learn and discuss “creative computation” in the Code Studio. “Coding with algorithms is a language, like drawing with charcoal,” says the school’s president, Rosanne Somerson.

• Escola Entrópica, established in São Paulo, Brazil, in 2014, is an alternative educational platform offering free classes for artists and cultural researchers connected to the Instituto Tomie Ohtake. Up to 100 students enrol in courses ranging from art history to quantum physics.