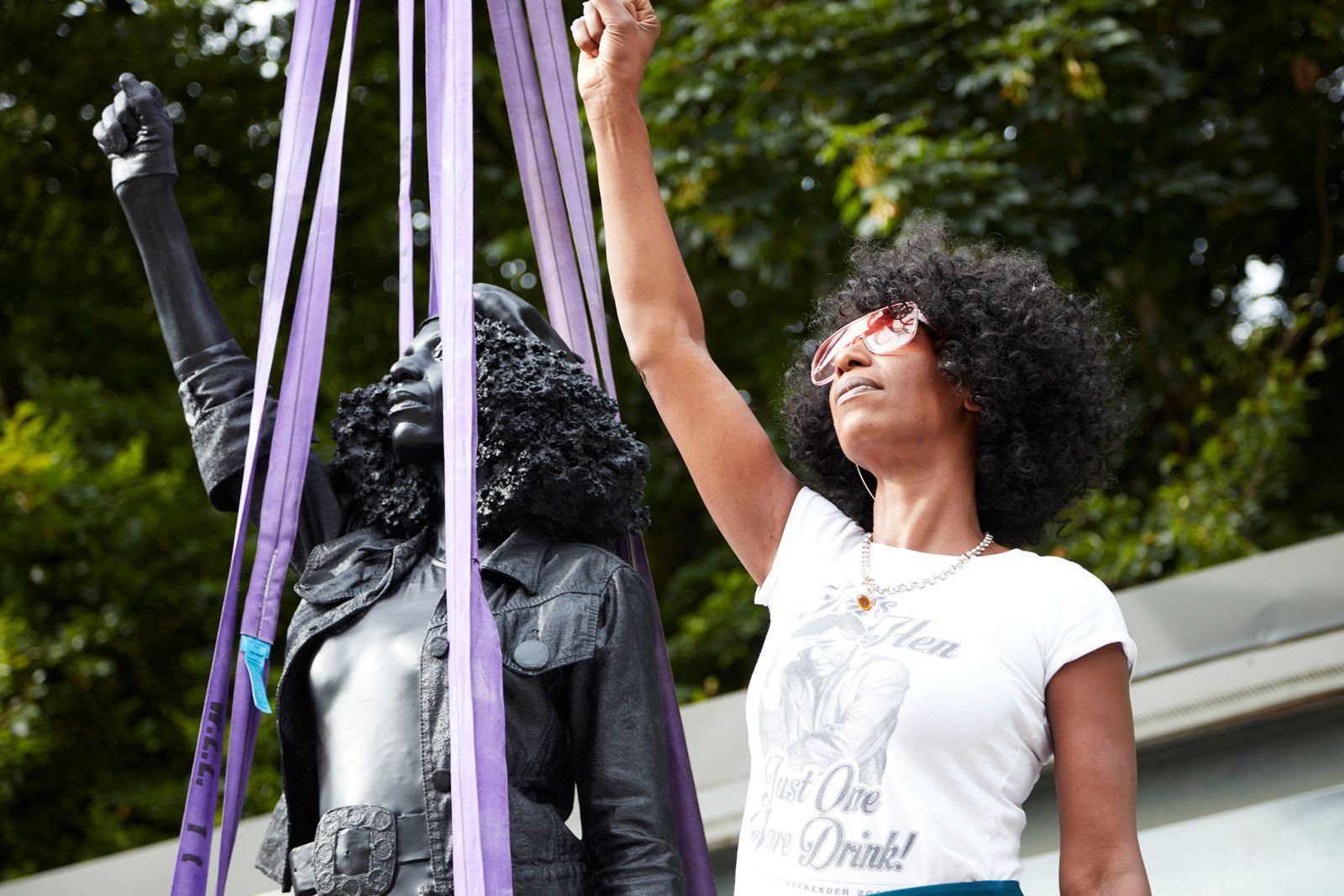 Jen Reid standing with Marc Quinn's A Surge of Power (Jen Reid) 2020, before it was installed Image: © Marc Quinn studio

A company director says he hopes to reinstall Marc Quinn’s statue of the Black Lives Matter protestor, Jen Reid, on the plinth in Bristol once occupied by the 17th-century slave trader Edward Colston. According to the BBC, the planning services company Interpolitan Ltd, led by Gary Rice, sought planning permission last summer after the work was removed by the city council to install the statue of Reid for a period of two years.

On 15 July last year, Quinn installed the sculpture on the plinth in Bristol previously occupied by Colston. Quinn’s work, titled A Surge of Power (Jen Reid) (2020), depicts local resident Reid who was photographed standing on the site with her fist raised after the statue was toppled.

The work was installed without council permission and was removed less than 24 hours later. Bristol's mayor Marvin Rees added that “the future of the plinth and what is installed on it must be decided by the people of Bristol”; the work was later returned to Quinn. Interpolitan Ltd has since lodged an appeal because the council reportedly failed to make a decision on its planning request. The appeal will now be heard by a government inspector.

“Whilst one can never be certain about the outcome of an appeal, the principle of a ‘portrait statue’ atop the plinth is well established. However, I would add the appeal procedure of an informal hearing allows the public to have their say about the importance of fostering a more inclusive and diverse public space, which is a very important aspect of the appeal,” Rice tells The Art Newspaper. A spokeswoman for Bristol council said: “The council has not made any decision regarding the applications. The applicants have exercised their right of appeal against non-determination, which will be determined by the Planning Inspectorate”.

Rice insists there is no connection with Quinn. “The decision to make the applications and subsequent appeal sits with me,” he says. Rice launched a crowdfunder last July to install the statue, which raised £110 towards a £1,000 target.

Jen Reid told the Guardian how she scaled the empty plinth after the Colston statue was dumped in Bristol harbour by protestors. “It took an age. My legs were heavy. I felt like I was sinking into the plinth. But the crowd were like ‘go on, go on’. I managed to stand up and give the black power salute. I felt a surge of power. It was giving back power to the enslaved people. Colston is gone. Now there is a new girl in town,” she said. The council says that the statue of Colston will be housed in a museum in the city.

Yesterday in Bristol, 12 police officers were injured in a “kill the bill” demonstration when protestors set fire to vehicles and stoned a police station. The demonstration was against the government’s plans to give police more powers against protestors as part of the police, crime, sentencing and courts bill.

UPDATE (28 March): Marc Quinn has not responded to a request for comment.